Dark Crisis: The Deadly Green #1: Magic, What is it Good For? 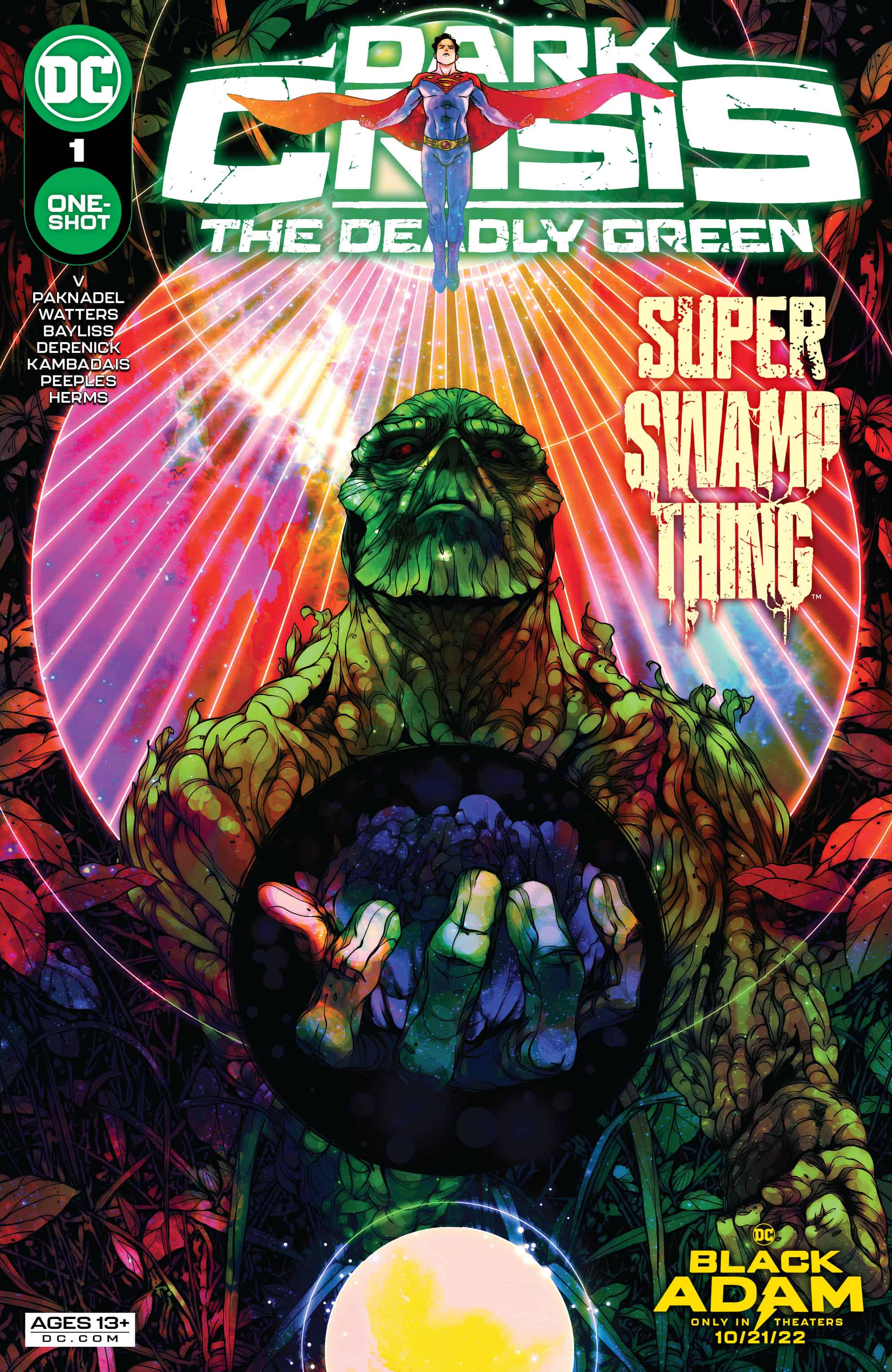 SUPERMAN AND SWAMP THING UNCOVER THE SECRETS OF THE GREAT DARKNESS! During the original Crisis on Infinite Earths, Swamp Thing encountered and formed a truce with the Great Darkness, but this ancient force has been awakened by Pariah and now its influence is felt across the Multiverse. Now the Avatar of the Green must work together with new allies to investigate how far it's spread and why it would work with Pariah. If they want to stop the Great Darkness from swallowing the Green, they need some extra help…ENTER: SUPER SWAMP THING.

Magic and mysticism lend themselves to shared universes, and in recent years, it’s become clear that DC is on the precipice of a renaissance of the occult. The revival of Justice League Dark under James Tynion IV, then handed to the expert hands of Ram V, paired with V and Mike Perkins’s stunning The Swamp Thing and even the short-lived Hellblazer by Si Spurrier and Aaron Campbell all speak to the powerhouse talent DC has placed on the magical side of their universe. But in the same breath, it’s also evident that there’s a lack of faith in those titles, with Dark being relegated to a back-up in the main Justice League title, The Swamp Thing only getting a single extension to the run, and the abrupt cancellation of Hellblazer.

In a just world, all three titles would be on-goings with the same creative teams, leading a new era of magic that channels the spirit of Vertigo, while still firmly operating and referenced in the larger DC Universe. Instead, the DC line is mostly cape books that occasionally employ magic as a fix or plot element that doesn’t serve the rich history and characters DC has and elevated in the past. The most refreshing part of Dark Crisis and its focus on the Great Darkness is the willingness to embrace the weirder and more esoteric parts of DC’s history and continuity and offers hope for a return to the mystical.

Dark Crisis: The Deadly Green #1 – written by Ram V, Alex Paknadel, and Dan Watters, with art from Daniel Bayliss, Tom Derenick, George Kambadais, and Brent Peeples, colors by Matt Herms, and letters by Troy Peteri – is an oversized one-shot detailing the response of DC’s mystical heroes to the Great Darkness. Superman, Swamp Thing, and Raven led the core story, venturing into the Darkness to reason why it awoke and is working with Pariah. In the main universe, Alan Scott’s Green Lantern and his children, Jade and Obsidian, work to keep the other heroes in the Darkness and enter a battle of wills to keep the connection. Meanwhile, Constantine gets split off from the group venturing into the Darkness, and is faced with the Darkness’s consciousness, speaking with it like previous incarnations of the primordial force.

The issue functions as a homage to Swamp Thing #50, which served as a loose tie-in to the original Crisis on Infinite Earths. The callback to that issue is evident in the structure and line-up of The Deadly Green. The largest difference between that tie-in in this one – outside of their publishing format – would be the scope and line-up of characters. Deadly Green is composed of DC heavy hitters and fan-favorite characters, like Jon Kent’s Superman, the Teen Titan’s Raven, and the recently revived Justice Society. This is a sharp contrast to the Swamp Thing issue, which was more focused on the titular character, along with fringe magic users and deep cuts from titles like House of Mysteries.

That delineation comes off as a byproduct of the changes DC has made in its publishing imprints and consolidation of characters into the main universe. Swamp Thing, along with characters like John Constantine aligned with and many times fell under the umbrella of Vertigo or Vertigo-adjacent titles, operating at a more mature and experimental style than what was unfolding across other DC titles of the time. Even though titles in the Vertigo line took place within the DC Universe, they at times felt in conflict or separated from the larger line, thanks in part to that artistic or tonal discrepancy. With DC’s shuttering of the imprint in January 2020, titles were either moved under the banner of Black Label, the Sandman Universe, or in some instances, a regular DC banner.

That choice is reflective in this one-shot, as it feels more connected to the large DC Universe, and the specific events of Dark Crisis. While the new Swamp Thing and Constantine play central roles in the issue, the action and crux of the one-shot fall onto Raven and Superman, centering the story in the realm of superheroes, not mystics and mages. Raven aligns herself with both groups, but her ties with the Titans push her closer to the superhero grouping, rather than her magical heritage. The centering of the plot in the heroics isn’t a deal breaker, nor does it ruin this issue, but it does take the wind out of it, and fractures the cohesion, along with weakening the homage it is trying to make.

Out of the various plotlines in this issue, it’s the Constantine subplot that feels closest to the tone and scope of Swamp Thing #50. The sequence is nothing but Constatine having a conversation with the Darkness, who changes forms multiple times, ranging from the Upside-Down Man to Trigon, and then the Lucifer from Sandman/Vertigo. The art in that dialogue is rendered perfectly by Derenick and evokes the feeling of the types of titles it’s trying to honor. As the conversation gets deeper and influences Constantine, it becomes a great turn for the bastard character and is one of the book’s best twists.

It’s clear by the end of the exchange between the Darkness and Constantine, doubt is the most powerful seed it could plant into the sorcerer. There’s no flashy magic, climactic fight, or soul-shattering reveal. The power on the page is the way the Darkness creeps into the laughing magician, twisting his frame of mind and playing on his darker impulses. It’s the tragic twist that while the heroes, Superman, Raven, and the JSA, were able to fend off the Darkness and find hope, Constantine was offered a bit of absolution and praise, but only found despair in the face of it.

Outside of the Constantine sequences, the pacing of the issue is overall off, in which the conflict between Raven and SUperman feels repetitive and stretched out at times, while the JSA and Alan Scott story is lacking in page real estate. It could be the result of a packed creative team that causes that discrepancy in narrative rationing, but it ultimately feels like the byproduct of rooting the story on the superhero side of the conflict, rather than the magical.

The art doesn’t match the promise of the cover, which gives the impression of the more experimental, less mainstream appeal of a magic-centric book. Of the book’s four artists, Derenick is the only one who comes close to matching that expectation with the Constantine sequences. Tonally, the styles match, and Herms’s coloring helps to give the book a cohesion that doesn’t feel jarring when changing styles on the page. It also helps that for most pages, the sequences are structured so that there aren’t sudden changes midway through a page, and that each style lends itself to the next.

That paired with Peteri’s lettering, which also sets a continuity across styles, especially in the way characters like Raven and Swamp Thing’s word balloons appear, ensures the flow of the issue is uninterrupted across page changes. The only fault in the coloring and lettering is in the conversation with the Great Darkness, as the team presents the dialogue with regular panels and word balloons instead of the black speech with white text, as seen in the Swamp Thing issue being referenced. It could have been a great visual callback to the story, but unless done expertly, would have been a distracting inclusion on the page.

Bayliss’s art in the opening of the issue is the most compelling outside of Derenicks, doing a great job of establishing the plan for the issue, but the softer pencils and shading play more into a style for a JSA story and less to the mystical characters. Kambadais and Peeples’s styles are the weaker of the two in this issue, which is disappointing because, in other instances, both artists are great. It’s a matter of tone and character, and both artists render expressions and action, okay, but something is off in both sequences. Faces, hair, and action effects feel forced and disconnected, and the effect of the infection from the Darkness is lacking here, as compared to when someone like Daniel Sampere draws it in the main title.

Even as uneven as the story and art are, The Deadly Green is a fun read, both for mainstream superhero fans and those wanting the more out-there characters to take the spotlight. This one-shot serves as a great reminder of how strong the recent mystical books from DC have been, and the potential they have for the looming “Dawn of the DCU” era. The issue also makes the case for the creative team to be the ones to help Shepard in those new titles, affirming that DC has the right talent for the undertaking. One can only hope that in the wake of Dark Crisis on Infinite Earths, The Deadly Green, and a horizon of a changed DC Universe, both in the story and across the publishing line, the magical side of the shared universe will get another chance to thrive.

Dark Crisis: The Deadly Green #1: Magic, What is it Good For?