Dark Crisis: War Zone #1: The War of the Legacies 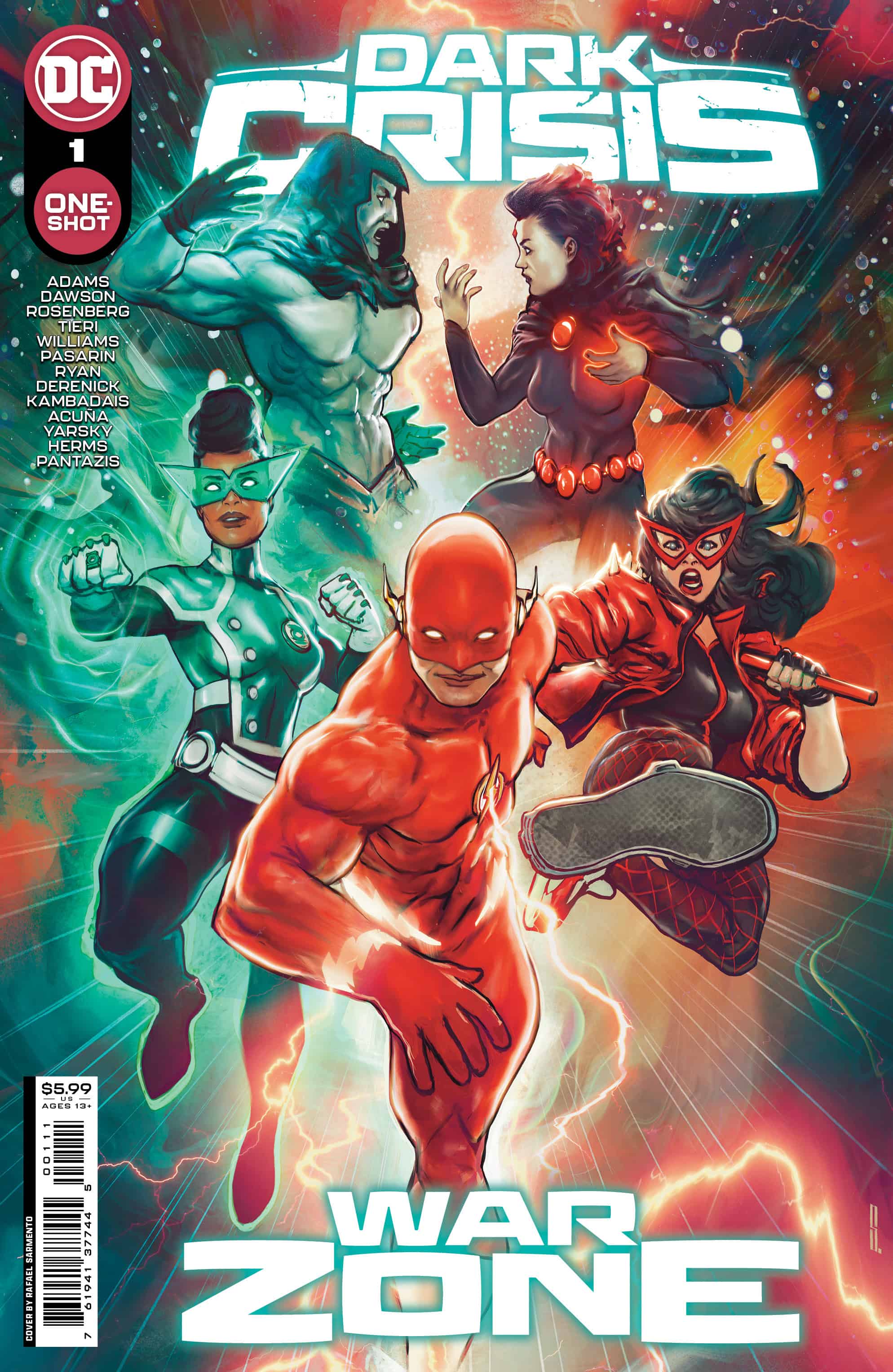 A BOOTS-ON-THE-GROUND VIEW OF DARK CRISIS! As the Hall of Justice falls, get new perspectives on the various conflicts while the battles across Dark Crisis rage on! With the classic Justice League members gone, see how members of the next generation such as Red Canary and The Flash Family deal with the chaos in this key chapter of the saga leading into Dark Crisis #7.

Tie-in one-shots can be a mixed bag, in the same way, anthology books can be. The use of various art styles may not gel with one another, or the juxtaposition of characters and stories create a disjointed experience. When a book comes together and exceeds expectations, it’s usually thanks to a thematic or narrative core that sets a strong foundation. It could be something as simple as focusing on legacy characters in an event that purports to be focused on them. This is the strength of the newest tie-in for Dark Crisis on Infinite Earths, which jumps at the chance to tell stories beyond the central Justice League (and extended Batfamily as well).

Dark Crisis: War Zone #1 features five separate stories set during the final battle between the DC heroes and Deathstroke’s army, giving a snapshot of the larger DC Universe fighting against the darkness. The first story, On Time – written by Jeremy Adams with pencils by Fernando Pasarin, inks by Matt Ryan, colors from Matt Herms, and letters by Troy Peteri – is a Flash-centric story, showing Iris and the recently powered Linda Park helping civilians caught in the crossfire at the Hall of Justice. The second story, titled Just When I Thought I Was Out… – written by Frank Tieri with pencils and inks by Serg Acuña, colors from Herms, and letters by Peteri – focuses on Jim Corrigan and Raven trying to stop the Spectre’s rein of terror under the control of Pariah.

The third entry, Amazon Helping Hand, keeps in line with the magical side of the universe by highlighting the various Amazons. The story features a script from Stephanie Williams with pencils and inks by Caitlin Yarsky, colors by Pete Pantazis, and letters by Peteri. The fourth story, Make our confessions long ‘cuz when we pray we keep it short, – from writer Matthew Rosenberg with pencils and inks by George Kambadais, colors by Herms, and letters from Peteri – details the non-Hal Jordan Green Lanterns fighting the Dark Army and the formless shades across the battlefield. The final story in the issue, Birds of a Feather, is the first meeting of Black and Red Canary, featuring a script from Delilah S. Dawson with pencils and inks by Tom Derenick, colors from Herms, and letters by Peteri.

Each of the five stories does a great job of avoiding overlap between stories, which allows for the scope of the massive fight to be explored. This collection functions like zoom-ins to the epic splash pages that Daniel Sampere illustrates in the main Dark Crisis title. The clear division of artistic and narrative styles also lends itself to the structure of the issue, breaking from previous tie-ins which told singular narratives with clashing styles.

The first story of the one-shot, which focuses on the spouses of the Flashs, is a strong start to the issue, and immediately highlights the narrative core of legacy characters stepping up to fight in the absence of a Justice League. Iris and Linda access the weapon cache inside the Hall of Justice and get the chance to show they can do as much good as the Flashs of the world. Adams’s script puts character first for these two and builds on the writer’s experience in the Flash book (and its loose Dark Crisis tie-in issues).

Pasarin’s pencils work in tandem with the script to highlight that character-forward approach, and from the opening panel’s focus on the bystanders of the battle, the art creates a lived-in, war-torn setting. Herms’s colors enhance the style, creating a unique palette for Linda’s powers versus the average person on the street. It’s a strong split that emboldens the spectacle while maintaining the emotional grounding of the story.

I Thought I was Out…, the one-shot’s second story, shifts gears from speedster to spellcaster, and immediately uses the change to zoom out to giant cosmic beings. Tieri’s choice to center the story on Corrigan and the Spectre is the only case of breaking from a legacy character but utilizes Raven in a way that makes up for it. The script also does a great job of carrying the structural throughline of focusing on character, but switching from a duo to the internal thoughts of Corrigan.

That paired with Acuña’s art, which is kinetic and full of magic spectacle, sells the internal drama and massive external stakes of the Spectre running loose. Acuña’s linework and Herms’s colors create a distinct magical styling that sings on the page and makes the case for the team to tackle a Raven or Justice League Dark book. The moments are flashes due to the clipped page count for each story, but go a long way to showcase the artistic talent on display.

The middle story of the one-shot, which shifts focus to the Amazonians, is the clearest in its use of legacy as a theme. Williams’s script centers around Clio, the historian of Themyscira, as she records the events of Dark Crisis for future generations. The script flashes to Nubia, Diana, and Yara battling Doomsday, but quickly switches to other Amazons helping man’s world. Putting out fires, tending to the wounded, and clearing debris are the heroic actions the women take, and prove themselves as true stewards of compassion and hope.

Yarsky’s art is suited to these depictions of compassion, showcasing the actions of people over the bouts of gods. It’s not that Yarsky can’t depict strong moments of action, proving that with the Doomsday fight, but it’s irrelevant in the face of common people in danger. That focus ensures both the art and narrative are tight and thematically centered.

If the third story is focused on the small and intimate moments of the Hall of Justice fight, then the next one shifts in the opposite direction. Rosenberg’s script sees Hal Jordan directing a core group of Green Lanterns, mainly Far Sector’s Jo and Guy Gardner, battling the Dark Army composed of the Great Darkness’s shadow beings. It’s a story of the two Lanterns fighting back to back, forcing back the shadows even as they’re overwhelmed. Rosenberg plays with the ethos of the characters and their organization to ensure hope is never lost, and willpower overcomes the fears of total defeat.

Jo and Guy can fight the shadows back, and Kambadais’s art makes a meal of the sequences. The kinetic, cartoony style works well for the sequences littered with alien designs and the simplistic shapes of the Dark Army, ensuring a strong clash occurs in every panel. Kambadais composes every panel using a diagonal gutter, giving the appearance of quick cuts between every panel, and feeding the action/war vibe to the story. It’s an excellent reinforcement of Rosenberg’s scripting and ensures that every panel feeds that sense of comradery overcoming overwhelming odds.

That sense of legacy and comradery is carried into Birds of a Feather, the final story of the one-shot. Dawson’s script is in direct conversation with the previous Dark Crisis tie-in by focusing on Red Canary after her mission with Robin across the multiverse. Canary is forced to reckon with her decision to become a hero in the absence of Black Canary, and her resolve is reinforced when the musician/vigilante returns. Dawson keeps the first meeting breezy and fun, with strong action beats and quippy dialogue that evokes the best of hero/sidekick dynamics.

Derenick’s art hones in on that tone and mirrors it, illustrating action that shows Red Canary’s promise even as she’s almost eaten, and delivering a powerful moment when the two Canaries take down their first villain together. Herms’s colors help to provide additional cohesion while ensuring the two costumes for the Canaries feel visually distinct but in step with one another. The red and yellow accents of the respective costumes create a striking contrast that is at its best in the first double canary kick.

Dark Crisis: War Zones #1 is the most consistent, and strongest of the Dark Crisis tie-ins thus far, taking the theme of legacy and spinning out five interesting stories beyond the Justice League. There’s no weak link in the five stories, and each one delivers at least one excellent narrative or artist decision that sells the story. The issue is a great sampling for those not reading Dark Crisis but might want to see a different perspective compared to the main title. It’s also a great sampling of what may come next for the DC Universe post-Dark Crisis, with its emphasis on legacy and new characters.

Dark Crisis: War Zone #1: The War of the Legacies