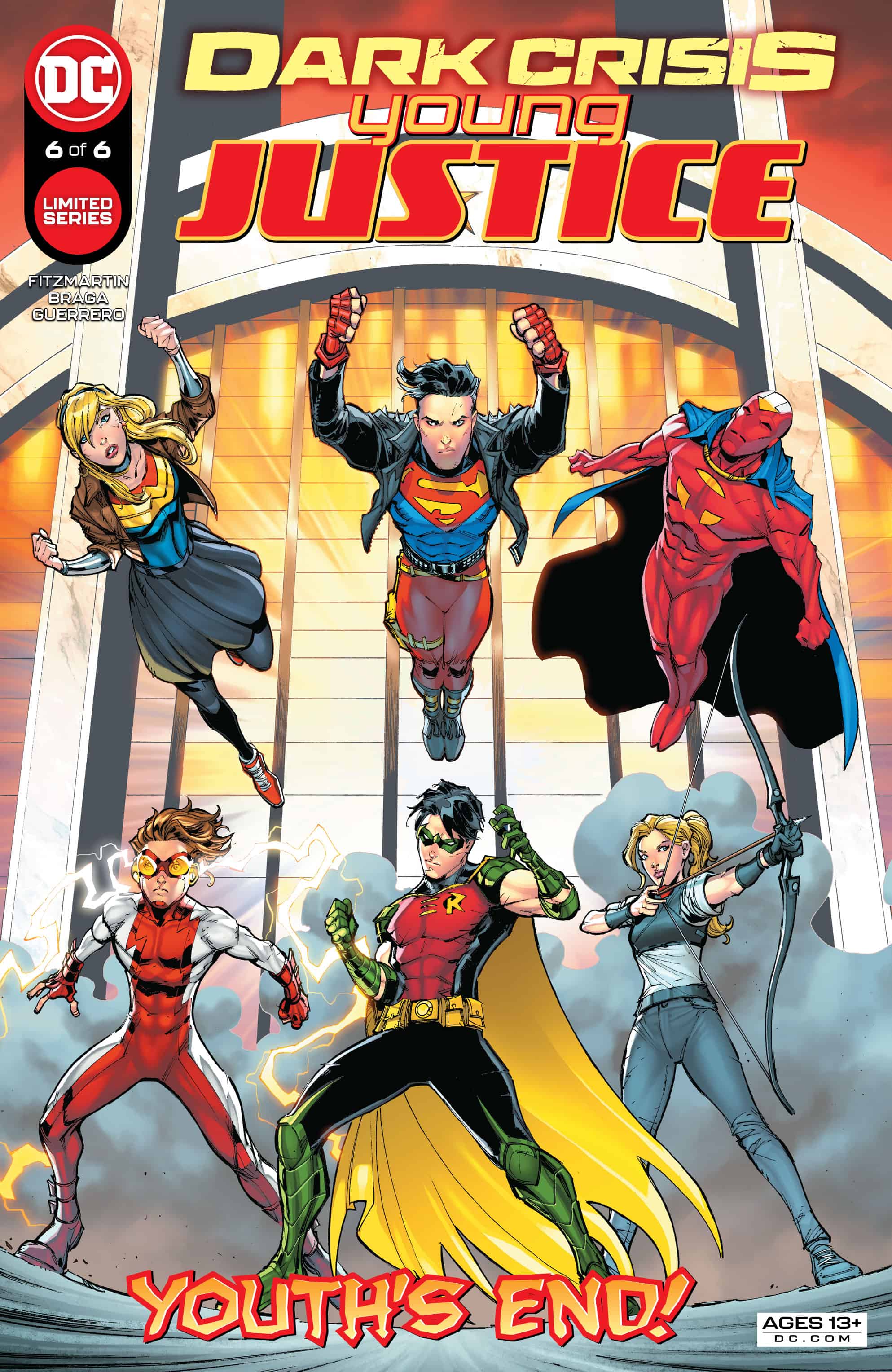 Superboy, Robin, Impulse, Wonder Girl,Arrowette; and Red Tornado are all reunited, but is it too late for them to face down the unmitigated and unhinged power of Mickey Mxyzptlk? Young Justice will have to let their old wounds heal quickly if they’re going to escape from Mickey’s fake universe and rejoin the real DCU to help join the final battle of Dark Crisis! 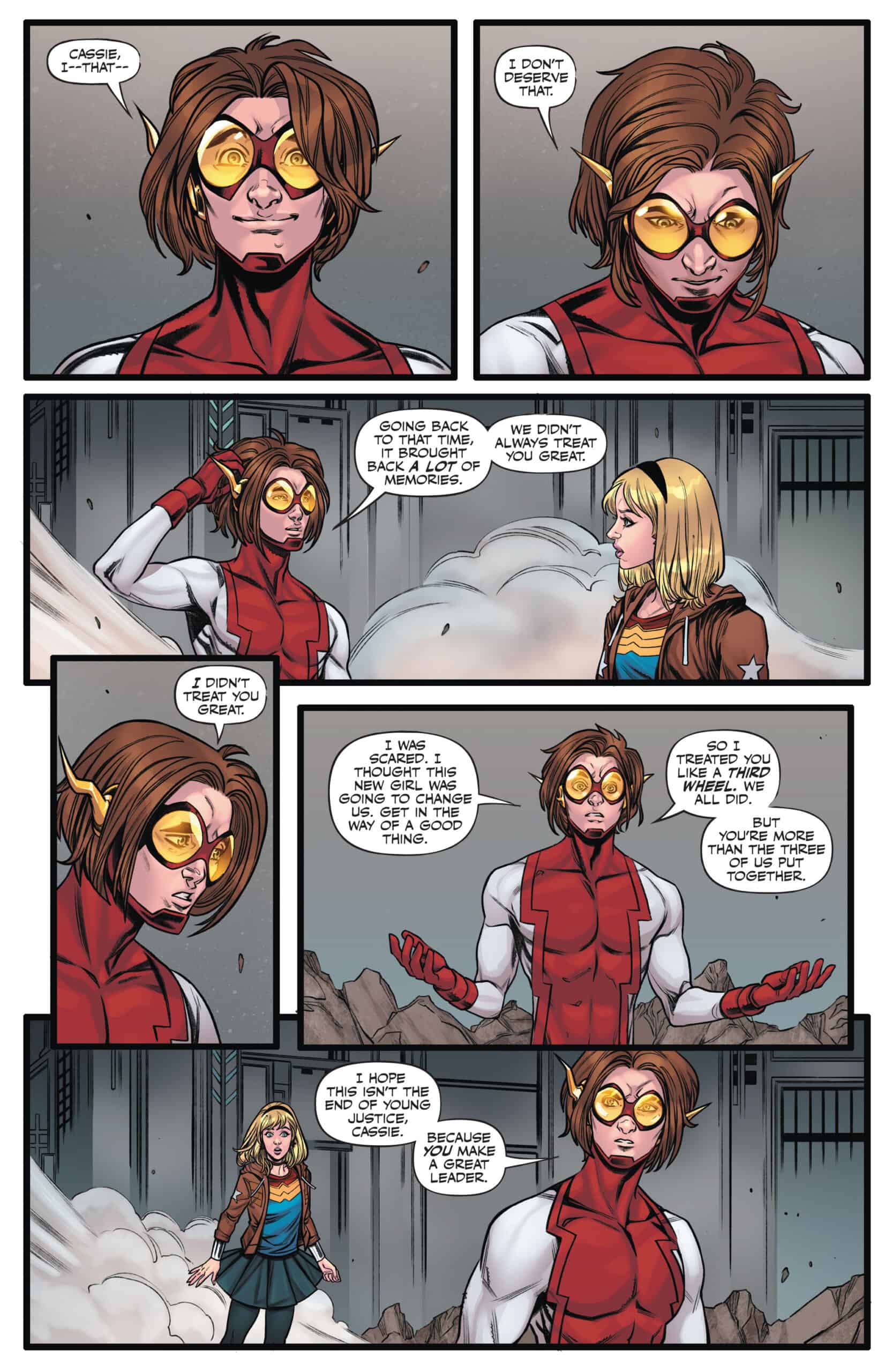 Despite the title, Dark Crisis: Young Justice spent its first five issues emphasizing the “Young Justice” aspect and all but ignoring the “Dark Crisis” component. Dark Crisis: Young Justice #6 does end up name checking the Hall of Justice, declaring that the other heroes need this team’s help, but Fitzmartin essentially spends the entire issue resolving this series’ basic plot. Unfortunately she thoroughly falls short at addressing any of the character threads she spent the past five issues putting in motion.

Dark Crisis: Young Justice #6 picks up with Young Justice and Red Tornado facing Mickey Mxyzptlk in the real world. Somewhat unsurprisingly Mickey is wiping the floor with the young heroes until Bart comes up with a plan to stop him. Once the plot with Mickey Mxyzptlk is resolved, the members of Young Justice depart for the Hall of Justice with the last page suggesting they will appear in the final confrontation in Dark Crisis on Infinite Earths.

While Fitzmartin does resolve the plot she set up in Dark Crisis: Young Justice, she utterly fails to resolve any of the character arcs she followed in the previous five issues. Conner’s longing for a world where he never died is dropped completely–never once mentioned in this issue. The conflict that Fitzmartin introduced between Tim and Conner is likewise forgotten. Cissie is all but absent from the issue. But In the most egregious example of Fitzmartin failing to pay off the character development she built over the course of the series, she wrote a moment with Bart where he completely contradicts something he said in the preceding issue.

In Dark Crisis: Young Justice #5 Conner tells Bart that he would make a good leader. Bart replies that maybe one day he will. In this issue, Cassie says the same thing to him when he alone comes up with the way to defeat Mickey, yet Bart replies that he doesn’t deserve the compliment because it’s Cassie who is a great leader.

This is emblematic of the entire issue. Rather than following up on the character stories she built throughout the series, Fitzmartin crafts an issue that sees Conner, Bart, and Tim praise Cassie non-stop. Possibly the only reason Cissie never gets involved in the unending adoration is that she speaks a mere four times.

There is really only one aspect of Dark Crisis: Young Justice #6 that succeeds (mostly) and, like in the previous issues, it is the art. Braga has carried much of Fitzmartin’s writing throughout the series, conveying via action sequences and character expressions a number of lackluster moments. In the case of this issue Braga manages to turn the focus on Cassie, which comes across as gratuitous for most of the issue, into something borderline tolerable by delivering what feels like genuine emotion (there is one sequence in particular involving Tim and Cassie near the end of the issue that is especially effective).

Something that does feel amiss in Braga’s work, though, is the environment and background throughout the issue. In the opening pages the members of Young Justice appear in front of the exterior wall of a building (what the building is is unclear). But at some point during the fight the building seems to disappear entirely and the panels feature generic rocky ground and a blank orange background.

Dark Crisis: Young Justice has been a fairly weak series to this point, almost entirely because of Fitzmartin’s writing. But this issue is almost entirely a storytelling failure as Fitzmartin ignores most of the material she wrote in the previous five issues. Further, despite the series’ title, Dark Crisis: Young Justice #6 fails to establish any connection to the event it’s nominally involved in and, thanks to the unsatisfactory resolution, feels like a waste of time.