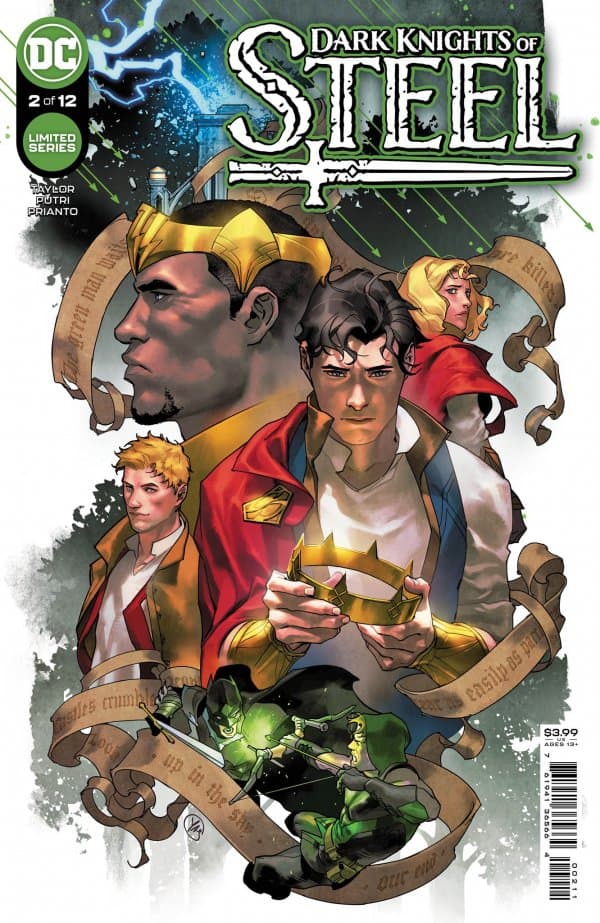 Empowered by the mysterious Green Man, Oliver Queen has slain king Jor-El. Now The Dark Knight is tracking him down. What happens next? Read on, to find out.

I’m going to state, right out, that this book is brimming with Injustice-level violence. It’s a hard read, if you are a parent — or if you’ve recently had a good-sized lunch. The fact that this violence is in the service of a grand, mythic story (one which treats some necessary themes) mitigates the horror, somewhat. But please do not underestimate exactly how Texas Chainsaw Massacre-y this book gets.

A young child is dropped from a great height, in front of his father. He splatters. That’s the level of depravity on display in these pages.

I titled this review Shakespearean Scope’ because the pattern we’re presented with in this story feels very familiar in that it features one king attacking another, through back-handed means, and paying for spilled Royal blood with a loss that hits him harder than his own death ever could — all while a dark, unseen figure pulls his strings just outside of his sightlines, setting up everyone within the boundaries of two kingdoms for a bloodbath.

The Shakespearean quality of the plot is underlined by the perfection of the characters: Harley as a mixture of Cordelia (offering honesty as the highest form of love) and Lear’s wise fool; The Green Man (who is he, anyway? I have some theories) playing Iago ‘pouring pestilence’ into the ear of King Jefferson and putting this bloody scene into motion. You have Bruce Wayne as Hamlet, alternately delaying and acting too brutally, too late. Stripping these characters of everything but the bones of their personalities was a brilliant move, we can see them clearly for what feels like the first time.

Speaking of seeing clearly, Yasmine Putri’s art is some of the best that I’ve seen in a long time. Her line work has a scintillating Pre-Raphaelite mythicism rendering each panel into a stained glass window, each pane illuminated by Arif Prianto’s jewel-toned colors. If Dante Gabriel Rossetti illustrated comics, this is what you’d get.

This book is brutal, violent, and altogether brilliant. If you aren’t reading this, you are missing out.

This book is brutal, violent, and altogether brilliant. If you aren't reading it, you are missing out.