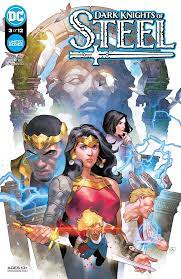 While Zala Jor-El continues blowing through the bodies of Kings and Knights like a snowblower through a blizzard, young Sir Bruce chases after a falling star. What new wonders await in this week's story? Well, you'll just have to see.

One of the most incredible aspects of this story, aside from undying the novelty of witnessing our favorite DC heroes within a new context, is that Taylor has managed to form a tale that is absolutely laden (in measures pressed down and running over) with both intimate character moments and large, sweeping plot. Every page propels the action forward while granting us insight into the realms each character has built inside of their heads.

We know King Jefferson to be a loving father from his brief scenes with his children in the previous issue. Those same scenes served as a means of setting up the action that we are presented with here, when we see him use that same (very real) love to skillfully manipulate both Queen Hippolyta and Princess Diana, forcing the one to swear her allegiance to him and effectively excising the other from her mother’s court.

Diana herself gets similar treatment. Last issue, we were presented with her deep love for her romantic partner, Zala Jor-El. In this issue that love causes her to abandon her mother, her country, and chase her girlfriend, possibly eventually joining the court of El. The things that these characters do are determined by their personalities and their contexts — exactly as our personalities and context determine our actions. This logical follow through is a shockingly rare achievement in the realm of comics. And that’s a real shame. This story, set in the realm of sword and sorcery, is one of the most psychologically real books being released right now.

Personality and history are not the summation of a person’s context. The world we inhabit, our physical surroundings, our cultures, our beliefs, all of these things inform the choices that we make. For this story to work, the world building must be absolutely top-notch. And, thanks to Taylor’s literary talent and Putri’s art, what we find in this story is a complex, fully-rendered alternate reality. There are seemingly-complete cultures on display. Not just the land of the Amazons (which was already well developed in the main continuity, and which appears here largely unchanged) but the countries of Jefferson and El also have their own distinct flavors, their own ways of viewing the world (El’s seems decidedly more patriarchal) and their own political strains.

As I mentioned, Yasmine Putri’s art contributes far more than literal visual narration. She sets each scene with precision, measuring expressions, body language, the framing of action, and the occasional moment of unflinching gore with the same loving care that Taylor takes on the scripting. Arif Prianto’s colors are deceptively cheerful, illuminating the line work while at the same time enhancing, through their startling sweetness, the brutal emotions generated by the art.

Reading this story has become one of the highlights of my month. I cannot wait to see what happens next. If you aren’t reading this already, hurry up and start. You really don’t want to miss out!

Excellent character work and startling world building combine to form one of the best, and most surprising, books currently on the market.