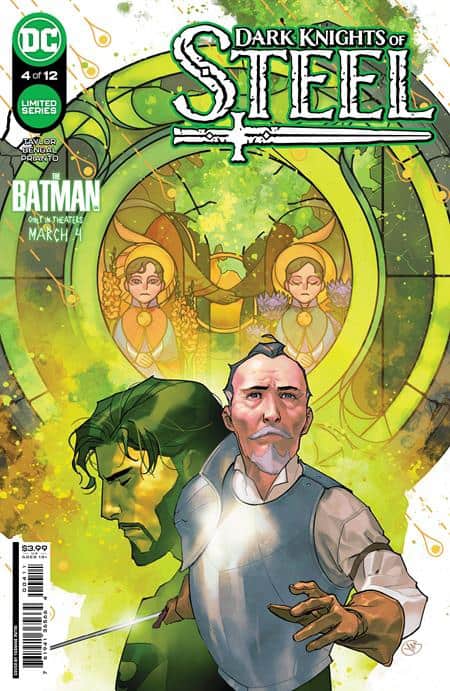 In which we encounter a truly epic exposition dump.

As I said a little further up the page, this issue is composed of a very long flashback, narrated by Sir Alfred, and designed to lend his perspective to both Sir Bruce and the readers. It’s very effective, as a device, and although I generally prefer exposition to be delivered more organically, it’s difficult to complain about the story that we are presented with. Exposition dumps are an old-school technique, and Alfred is a very old-school knight, so there’s consistency between the type of character relating the story and the way that the story is told.

The fact that Taylor chose Alfred to deliver this story was perfect casting, given the fatherly relationship he has with the grief-ridden Bruce. His admiration for all of Bruce’s other parents (seriously, he’s got five: two mothers, three fathers. And all of them are at least nominally good people. Lucky chap) surfaces in the form of understanding and compassion. He can both illustrate and mitigate Jor-El’s pride, Thomas’s unbending honor, Martha’s strength, and Lara’s naked heroism.

The identity of The Green Man was incredibly interesting. Folding Luthor into the Joker, fusing their characters, was a smart way to explain his hatred of all of the El-related characters. His motivations are simultaneously clear and believable, and that’s a rare thing in comics.

The art was sufficient for the day, but it wasn’t as strong as it has been in previous issues. I miss Yasmine Putri’s Pre-Raphaelite mythicism. Arif Prianto’s colors did a lot of the heavy lifting. It was still acceptable, and I don’t at all intend to disparage the artist, but it seemed a little sketchy and rough compared to previous offerings.

Taken together, this was a very effective installment, a strong link in the chainmail that Taylor is forging.

This is a very effective installment, a strong link in the chainmail that Taylor is forging.