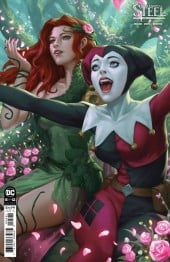 In which Sir Bruce attempts to have a heart to heart with his brother. It does not go well. Lies and treacheries abound in these pages. Read on, if you dare!

Tom Taylor just can’t seem to resist writing evil (or at least deeply flawed) versions of Superman. I, for one, can’t get enough of these twisted versions of a character whom I genuinely love. This version is, it turns out, very twisted indeed. What makes Taylor’s take on this trope unique is his insistence on inserting a deep-planted bedrock of psychological realism into what could otherwise be merely yet another hollow gotcha! designed solely to sell books. The fact that he understands these characters so thoroughly (in every incarnation) allows him to play these otherworld games in a way that feels true to who these imaginary people actually are.

In this instance, instead of an undocumented immigrant, who was taken in by good, humble people, Kal-El has been raised to view himself as a god. If the people you rule view you, despite whatever objections you might raise, as something divine, you’ll have a difficult time resisting the notion. This is a Kal who has been inculcated in an environment in which he is the epitome of capital-P Privilege, a king rather than an immigrant.

More than that, he is a King with powers that an army cannot match, who believes (to the very marrow of his bones) that he is meant to rule, and he’s just been presented with the spectacle of someone who he believes must be both physically and morally inferior claiming to be more than his brother. He heard Bruce lay claim to a throne that he deeply believes to be his.

Bruce, for his part, is still reeling on the emotional level, riding the roller coaster of his new history. He hasn’t understood, yet, that he is the heir by every measure. When he makes his revelation, Kal sees immediately exactly how easily he could be deposed.

This is only a taste of the complex writing this book has on offer. I could go on for pages about what he’s doing with Supergirl, Diana, Harley and Ivy. It’s great to see so much queer female action in this story. (I’m over here, praying that Taylor grants my wish for another mainstream non-binary character) All of the players in this book are well considered, believable, despite the fantasy tropes perennially in play.

Yasmine Putri’s art (enhanced by Arif Prianto’s astonishing colors) renders scenes of unbearable brutality with the clarity (and deceiving simplicity) of an illuminated manuscript. I cannot emphasize enough what an astonishing artist she is. This story is elevated by its devastating beauty.

This comic is as psychologically real as any  story ever was. There’s tremendous depth, and beauty, within this LARP. If you aren’t reading it, you are seriously missing out.

This comic is as psychologically real as any story ever was. There's tremendous depth, and beauty, within this LARP. If you aren't reading it, you are seriously missing out.