Valla continues her crusade against those who enabled the darkness that consumed her world, but is soon confronted with an unknown opponent threatening to kill her! 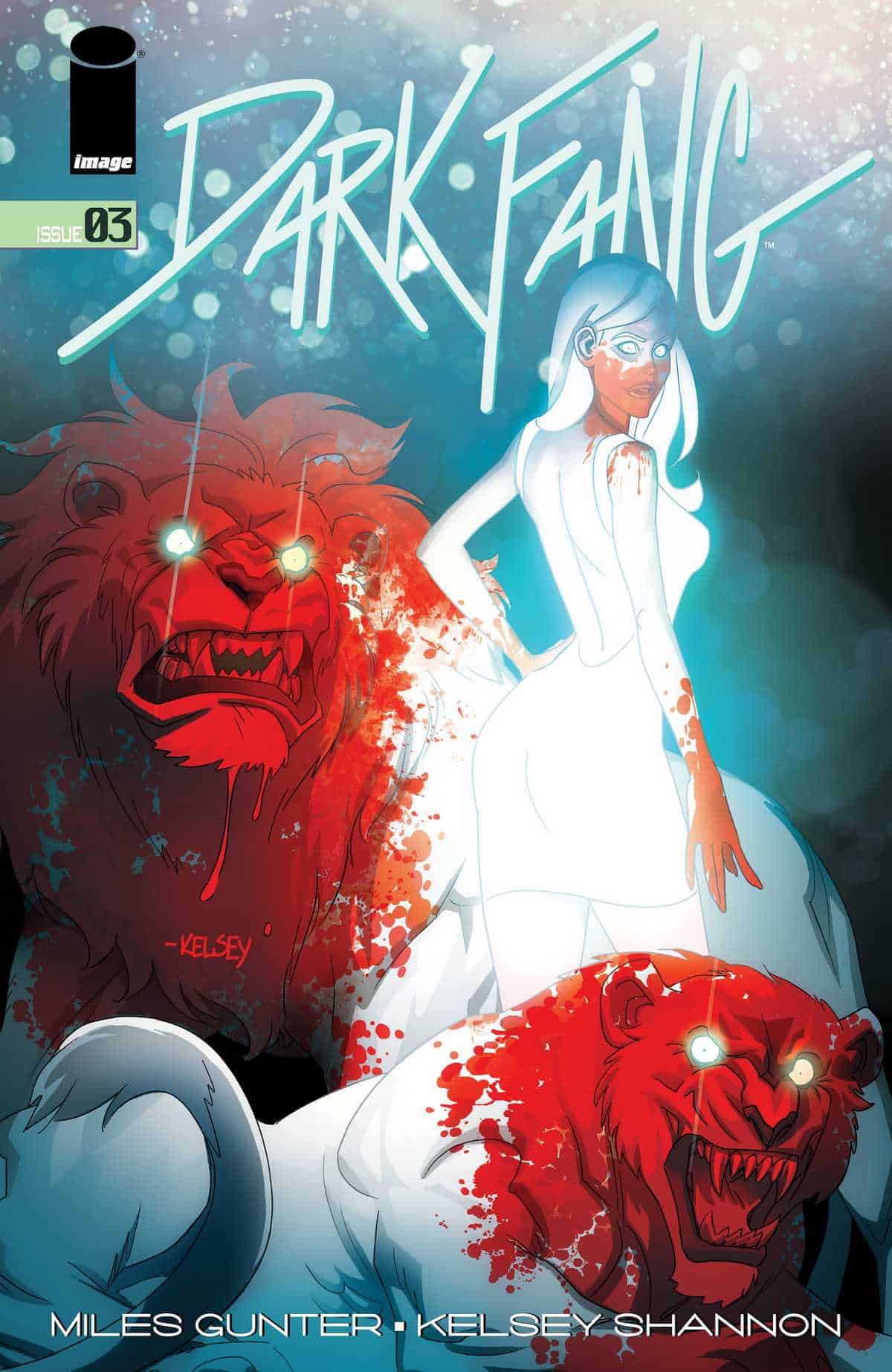 Once a simple fisherwoman, Valla was turned by a vampiric monster only to soon discover their extended lives had led to a naivety that would be their downfall. After killing the monster and his brides, Valla went into the depths of the ocean to avoid the sun’s rays and begin a new life, no longer bound by human emotion. One day, however, a darkness befell her paradise and consumed everything in its path. Only her vampiric powers saved her. Fearful of the darkness returning, Valla was forced to cut her ties and return to the surface.

Her first victim on the vastly different surface exposed her to not just the indecencies of this society, but also the potentials. By using her powers to exploit these potentials as a cam girl, Valla was eventually able to purchase none other than Dracula’s castle. Though she was swept up in the emotions of worldly possessions, she soon remembered why she was on the surface when Valla discovers a blackness spreading on her fang.

After gathering answers about her fang from the talking heads of the brides she had slain so long ago, Valla discovers a platform out in the ocean that has displaced a local fisherman due to its recent oil spill. Not only does Valla leave the platform in flames, she discovers the company responsible and soon has the name and location of their CEO.

Using her vampiric powers, she demands the CEO give a list of everyone he has done business with, including those in the government. With her new list of targets completed, she drowns the CEO in his own pool filled with jello…

We begin with a world on fire, cities decimated and the seas boiling, but Valla still endures. She has survived on reservoirs of blood taken before humanity slowly purged itself from existence, but it’s all gone now. She has used every drop of blood in the world, and now she waits for the sun to rise so that she may finally deliver herself to death. The sun doesn’t rise though, and Valla soon sees the shadows as a prison. Her immortal body suddenly ages and begins to turn to dust, though her mind still remains, hell awaits her…

This turns out to be a dream of Valla’s. These visions show to her that humanity’s foolishness will be their downfall and she will inherit their mistakes unless she changes things. 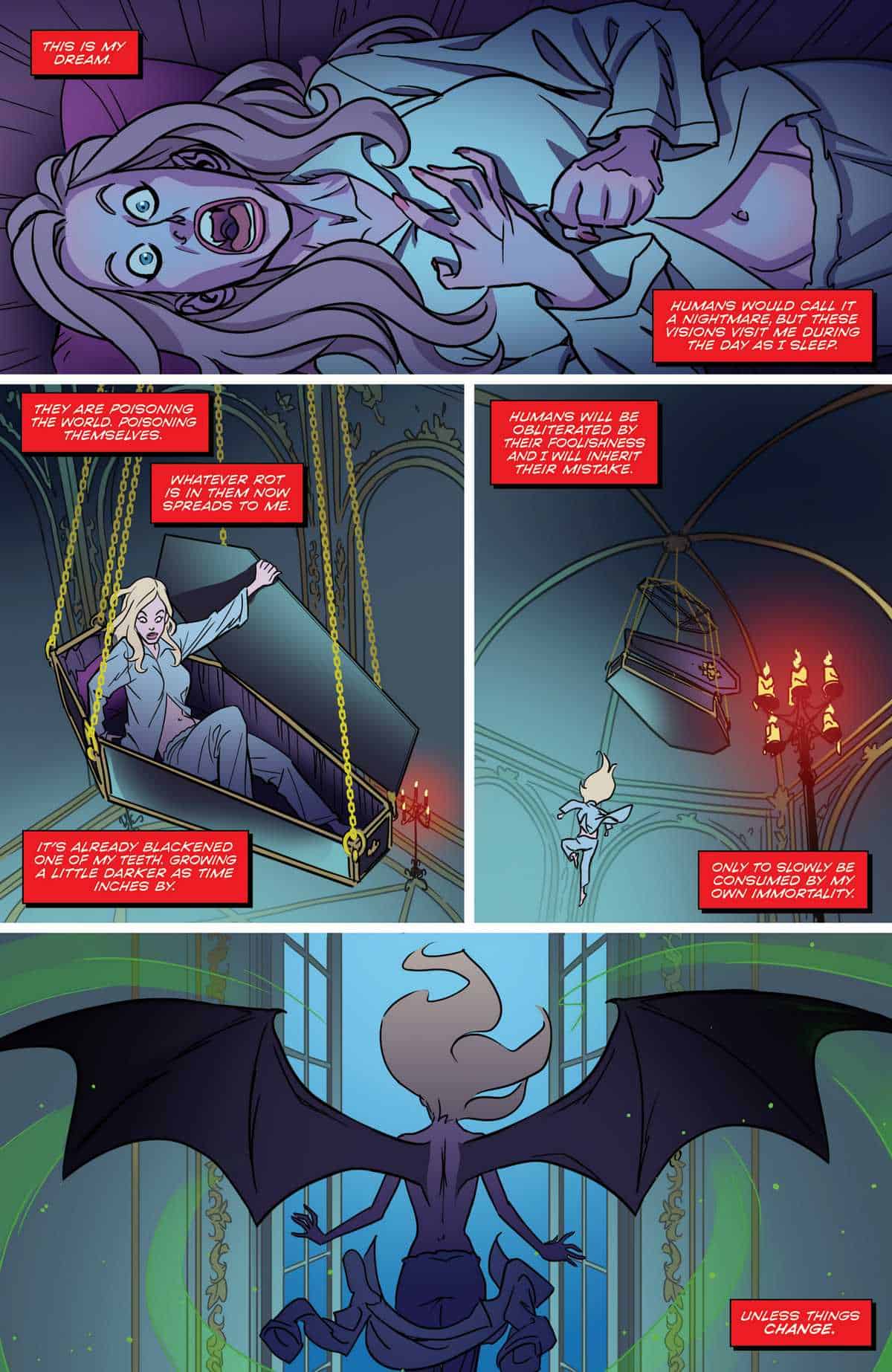 Pulling up to an enormous house with a security detail is an individual known only as “Lone Star”. As he gets out of his sports car with horns on the front, we see a man wearing a cowboy hat and bolo tie, but as soon as he enters the home Valla is there to greet him. Dressed in all white with two white lions at her side, she strides down the staircase and greets the Senator, despite the security detail pointing guns at her. Before long, the security guards join the rest of the man’s agents in a nearby room where their mentalities have all been returned to that of an infant.

The Senator laughs at first, thinking all of this to be a “gag for his birthday”, but is soon down on his knees before Valla as she uses her vampiric powers and demands him to feel humility for the first time. As he begs for his life, Valla recounts the plans the Senator had for the two lions involving a rocket launcher and champagne but explains how his property and his entire fortune will now be dedicated to the well-being of their species. Even though these two, in particular, will be sedated and flown to a safe place, Valla informs the Senator that it is important for them to eat before their trip. She wishes him a happy birthday and the blood from her victim soon covers the lions… 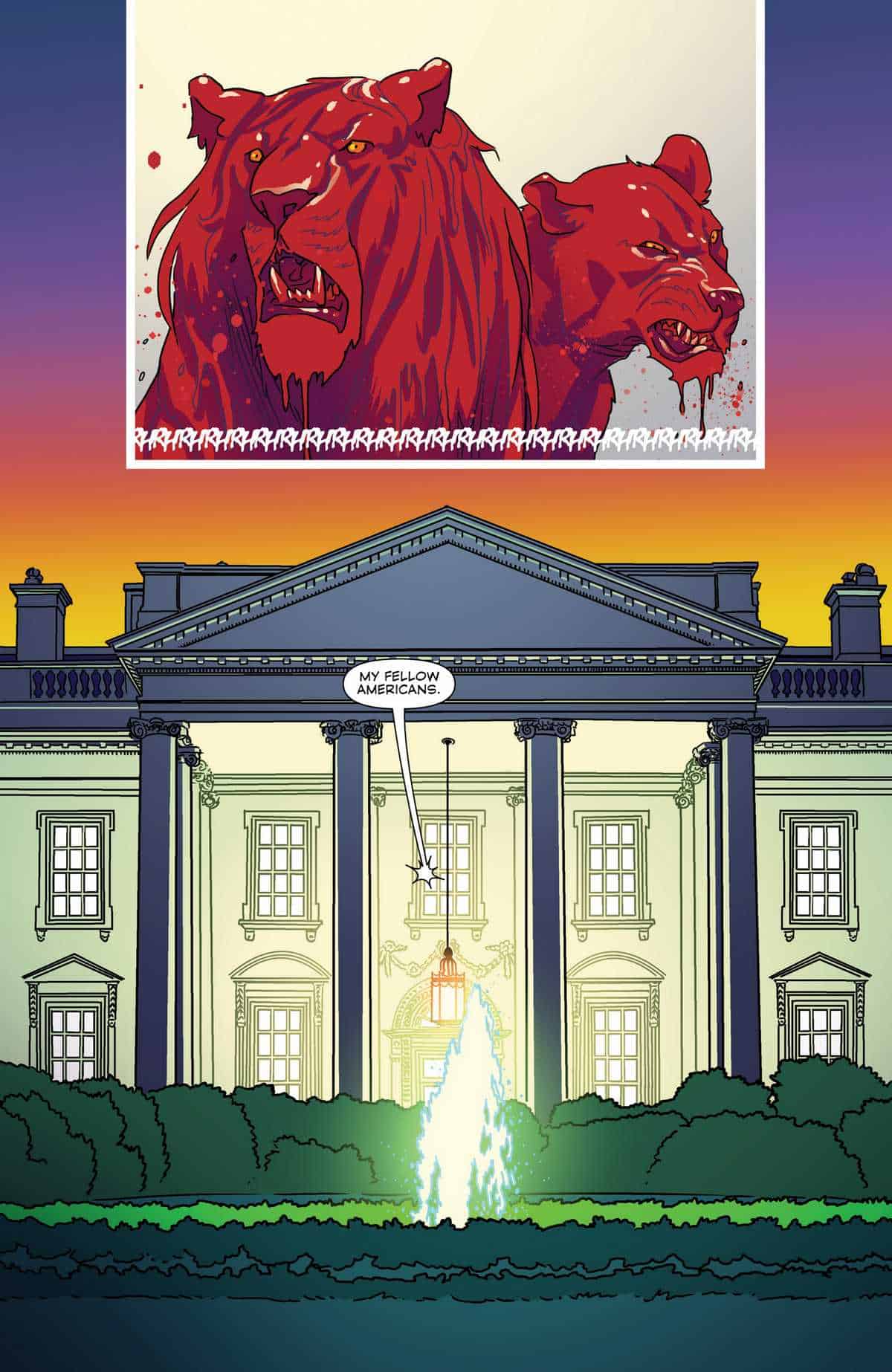 As the President of the United States addresses the nation regarding the surge in “terrorist attacks” that have cost the lives of so many who work in the oil and gas industry. As he attempts to calm citizen’s fears, he is beheaded on live television as millions watch in horror.

In a secluded castle in the wilderness, we find Director Maddox of the National Security Agency who has shown up to inform a massive hooded man who resembles a monk of the President’s death. Though he has a particular disdain for modern technology, he recognizes the woman as a “sublunar threat” and says that they must find her and put her down for the good of the country.

As a large winged bat, Valla flies over rows and rows of solar panels in surrounding fields. She had financed the largest solar project on the planet and created well-paying jobs for anyone who desired one, even though the government was furious at times. As she lands in her castle, she takes a moment to reflect on her cam girl page, without which, none of this would have been possible. However, just as she opens her phone she is struck to the ground by the massive man from before, now holding a large book with what looks to be a cross on the front cover…

Continuing an absolutely thrilling and original vampire story, Dark Fang #3 opens the narrative to an even larger world than before. This time we find Valla targeting a Senator first, then the President of the United States himself, as she continues her merciless task of ridding the world of those who contributed to the blackness that consumed her. Writer Miles Gunter expands on Valla’s unique story at a fast pace that shows no signs of slowing down anytime soon. The use of modern societal issues to drive the narrative continues to delight, as readers are given a vampiric story that is packed with heart and of course, blood.

Artist Kelsey Shannon continues to impress with an artistic vision that greatly contributes to the overall originality felt within the story. With a color palette that continues to separate the series from anything currently available, the artwork is simply beautiful. 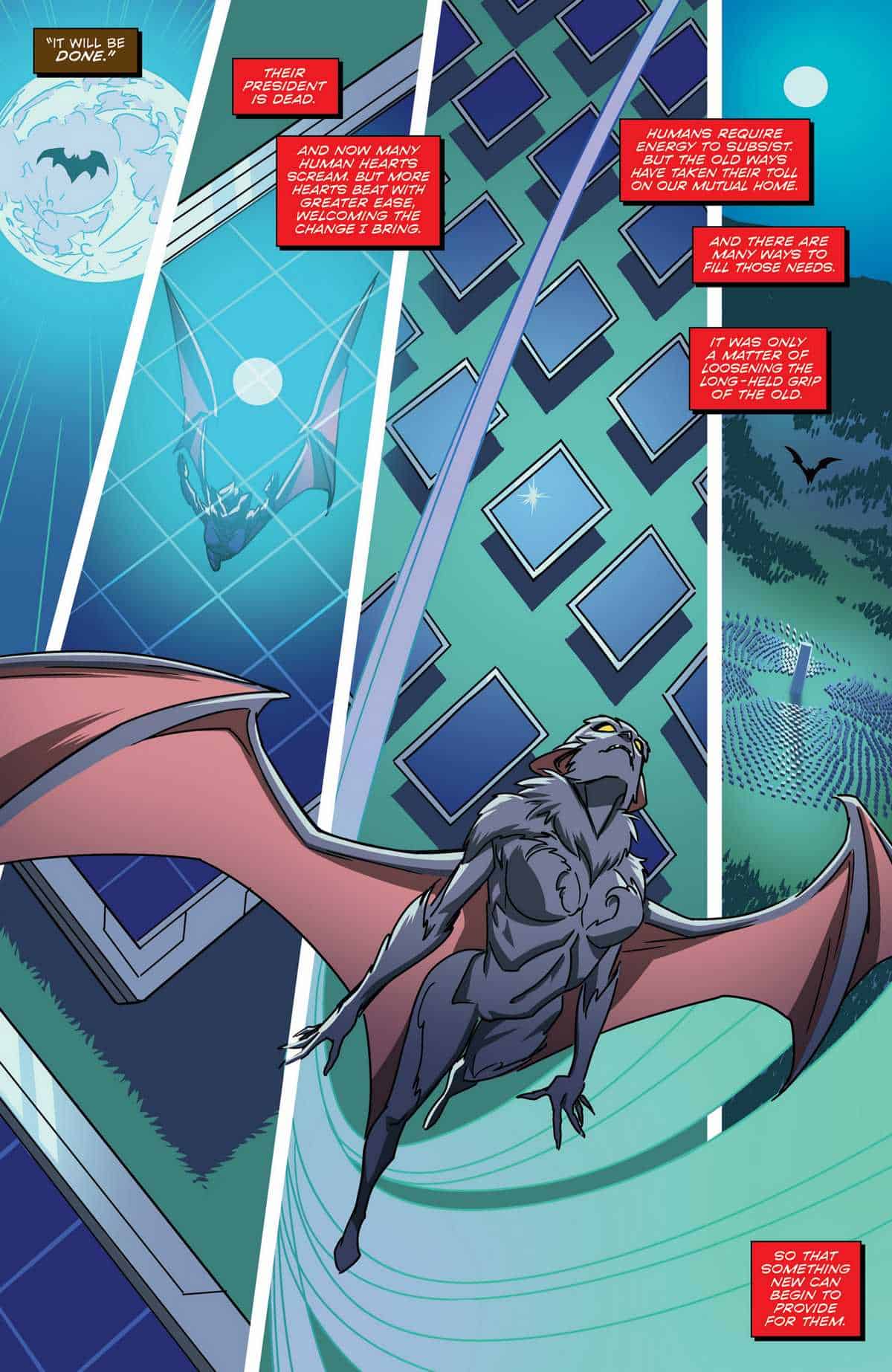 The latest issue does an amazing job of not only maintaining the intensity of the issue prior, but escalating it far beyond expectations. This begs the question, how many issues can Dark Fang continue to successfully expand on the narrative so broadly? As we go from her turning into a vampire to becoming wildly rich as a cam girl, then killing a CEO of a major organization, we now find Valla targeting the highest office in the United States. Though she now has an obvious opponent in the unknown man tasked with stopping her, I can’t help but to be curious where her plans will take her next.

Dark Fang continues to not only be a socially relevant story that needs to be told, but also just an incredibly enjoyable vampire story that consistently offers a great reading experience. Image Comics has shown their ability in the past to create original stories and differentiate themselves from competing publishers, and I believe Dark Fang is another great example of this. It is powerful, bloody, and delightful!

Final Thoughts: As the series continues to open the story to a much larger world while exploring the progress and impacts of Valla’s crusade, each issue finds its strength in ramping up the intensity while keeping it packed with heart. Dark Fang #3 equally impresses with both its narrative and artistic quality, as the series quickly proves to be among the best in Image Comic’s lineup.