Darkhold Omega #1 You’ve seen the Alpha, now are you ready for the Omega? 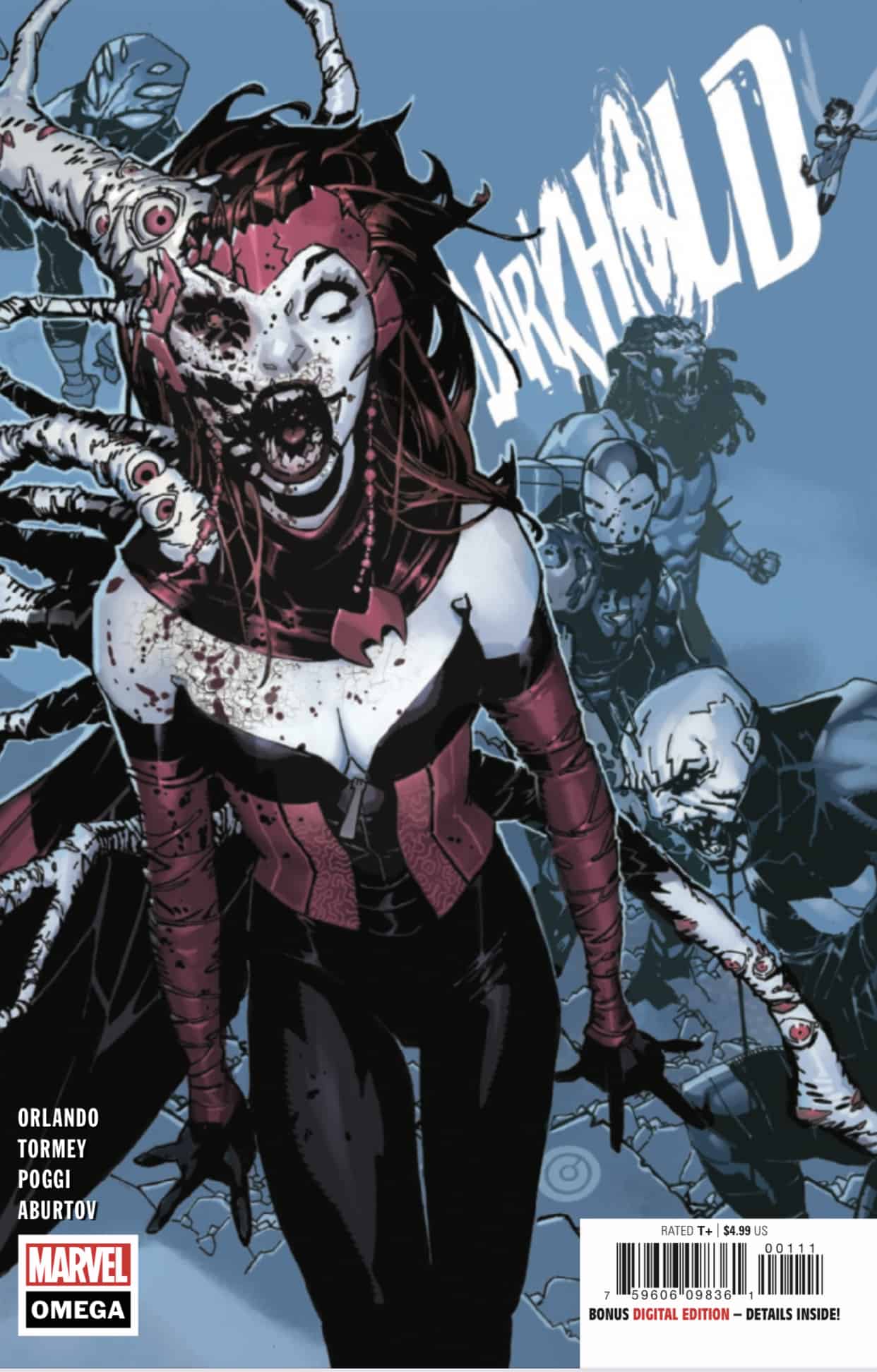 THE FATE OF ALL EXISTENCE LIES IN THE HANDS OF FIVE TWISTED MINDS! Five of the world’s greatest heroes – Spider-Man, Black Bolt, Blade, Wasp, and Iron Man – took a chance and read from the cursed Darkhold. They were meant to gain the power to fight back the dread elder god Chthon – but instead they’ve lost their minds and all they once held dear. Was it worth the cost? And who is their bold new ally – a product of Chthon’s dark dimension, or something else entirely? Steve Orlando and Cian Tormey deliver a heart-pounding conclusion to the epic Darkhold event – and introduce a hero who will take the Marvel Universe by storm!

To all good things, or in this case Ch’Thonic, must come to an end to the most bizarre magical mystery tour of 2021 (I know it’s 2022, but this WAS supposed to be released last year). This bookend to the Darkhold event is action packed from cover to cover, and is the best showing we’ve seen for Wanda in years. She’s capable, powerful, and in control. Not used as a device for Doom or Ch’Thon, which is a very welcome change, because Wanda has had decades of character advancement by being the pawn of some more powerful male characters, but Orlando certainly bucked this trend here. Tormey certainly showed out here as well, as we’re treated to a real wealth of designs for the characters, monsters, Ch’Thon, and their worlds. Also the reintroduction and redesign of a very obscure Marvel character has me tingling with anticipation for what they have planned for them.

Cian Tormey again continues to show off his skills here, and it’s a testament to his talent. Doom looks like Doom should. Wanda is powerful, and regal, and given a real sense of agency with her design by Tormey. I also really like the design Tormey has for Ch’Thon here. Ch’Thon is often portrayed as a creature right out of a HP Lovecraft novel, but here he’s more of a Lucifer/Fallen Angel type, and is quite beautiful, even though he has huge horns sprouting from his brow. It’s a take that I’m quite pleased with, which was shocking. I hope this is a launching pad for Tormey onto bigger things in the months and years to come at the House of Ideas.

This event was rather uneven, with the separate one-shots centered on the chaos possessed heroes, in a world not of their own making. The one-shots were somewhat enjoyable, but rather irrelevant to the overall story. I feel like we should have had more issues added to this event to really flesh everything out, because the Alpha issue was all set up, while this was just a slapdash run to the finish line. The lack of continuity between issues really highlighted how handicapped Orlando was with this event. Steve Orlando is a very talented and capable writer, who’s really shown his magical chops with his runs on Wonder Woman, and the 3-issue Man-Thing mini released last year, so the real lack of depth felt with this cast feels like a grave disservice to not only the fans, but Orlando and Tormey as well. Hopefully we’ll see a follow up from this team, because this event should have given us so much more than what we were given.

A magical event that was rather uneventful, despite the excellent work put out by Steve Orlando and Cian Tormey, left me wanting more. I hope this isn’t the end of the road for Wanda and Orlando, because he really has a nice grasp on who she is, when she’s not being portrayed as a plot device for the growth of other characters.

Darkhold Omega #1 You’ve seen the Alpha, now are you ready for the Omega?