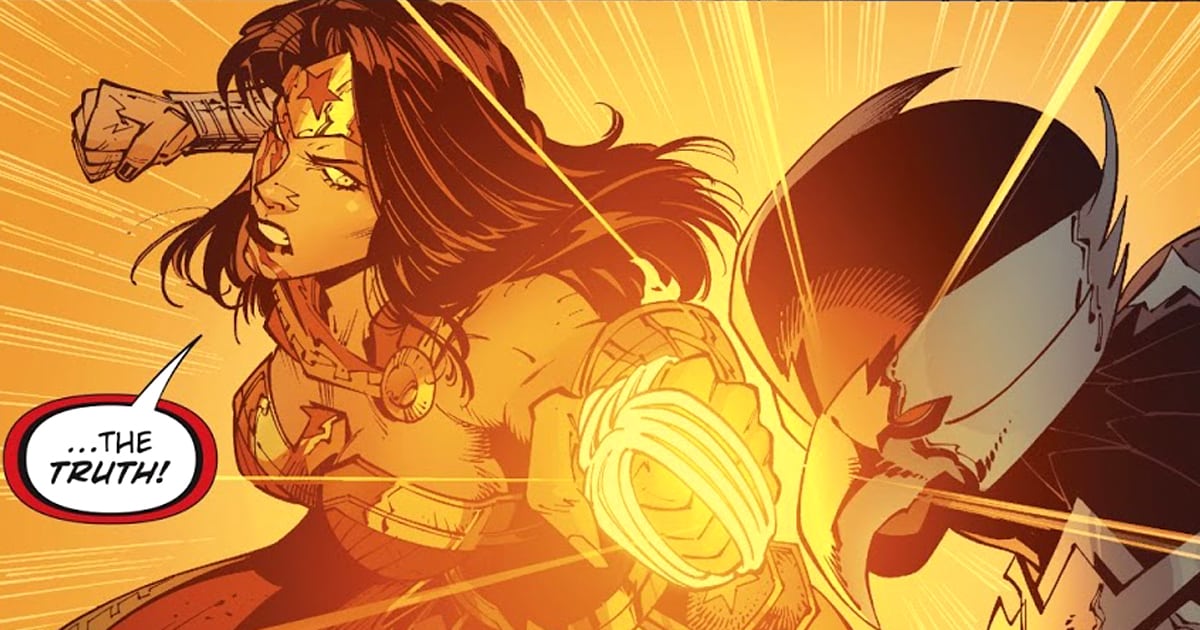 As the League is scattered across the universe, Barbatos prepares to unleash his army of nightmares.  Can the various members of the League track down the Nth Metal, now that Barbatos is in League with some of their greatest enemies?  And with the Forge cloaked in darkness, can Batman and Superman even hope to ignite the spark that will lead to Barbatos’ defeat, or is it all too late? 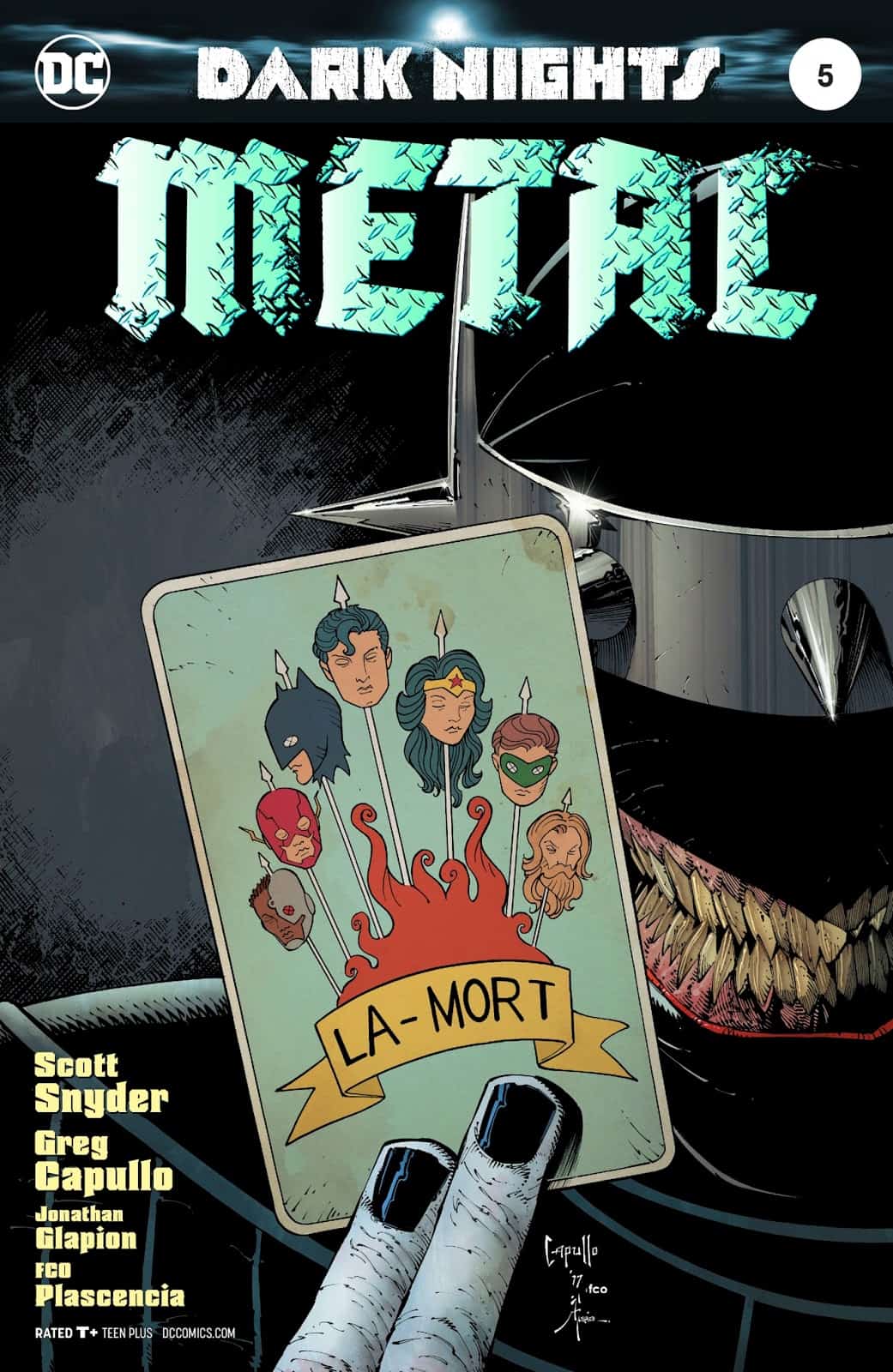 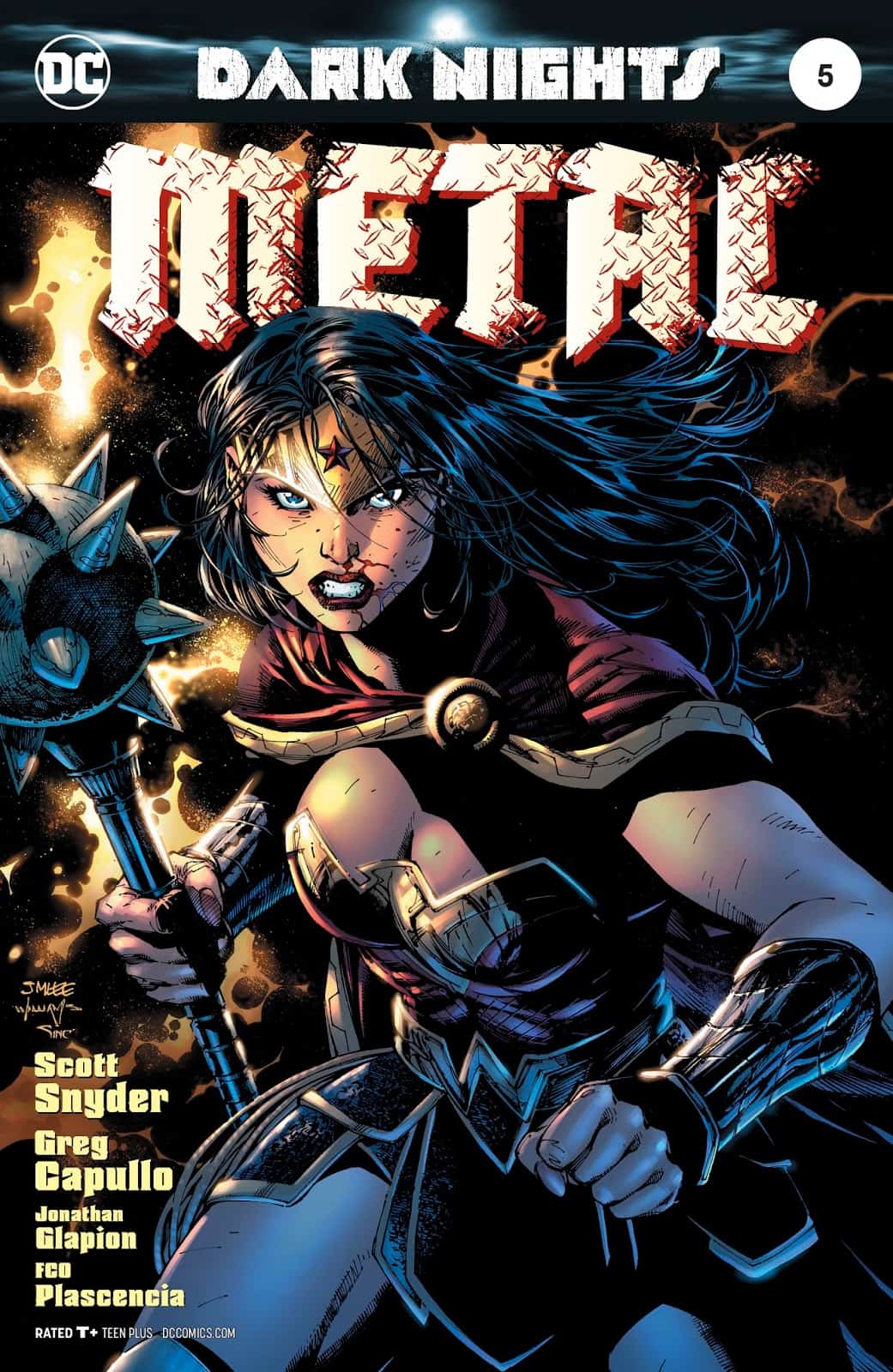 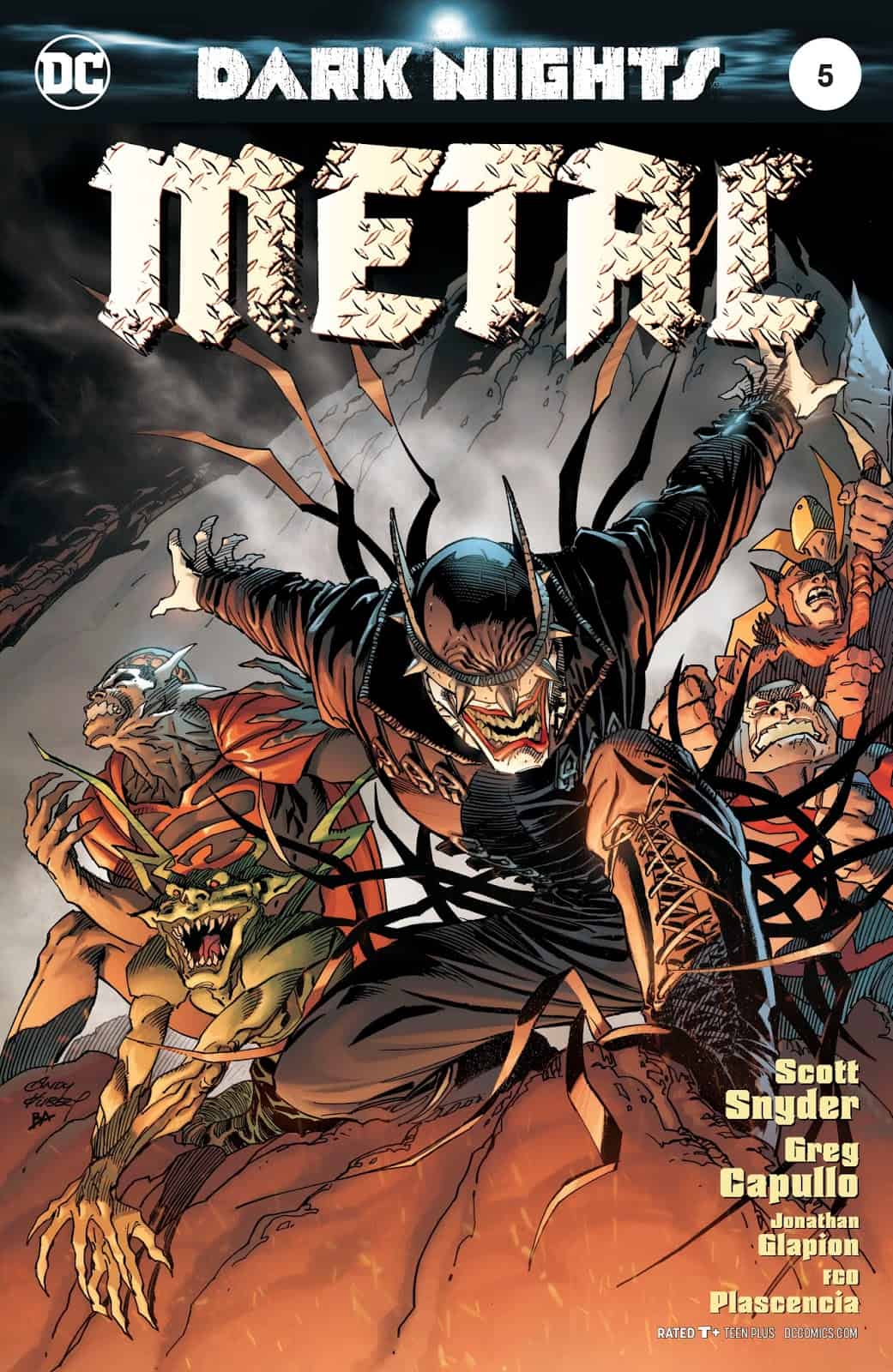 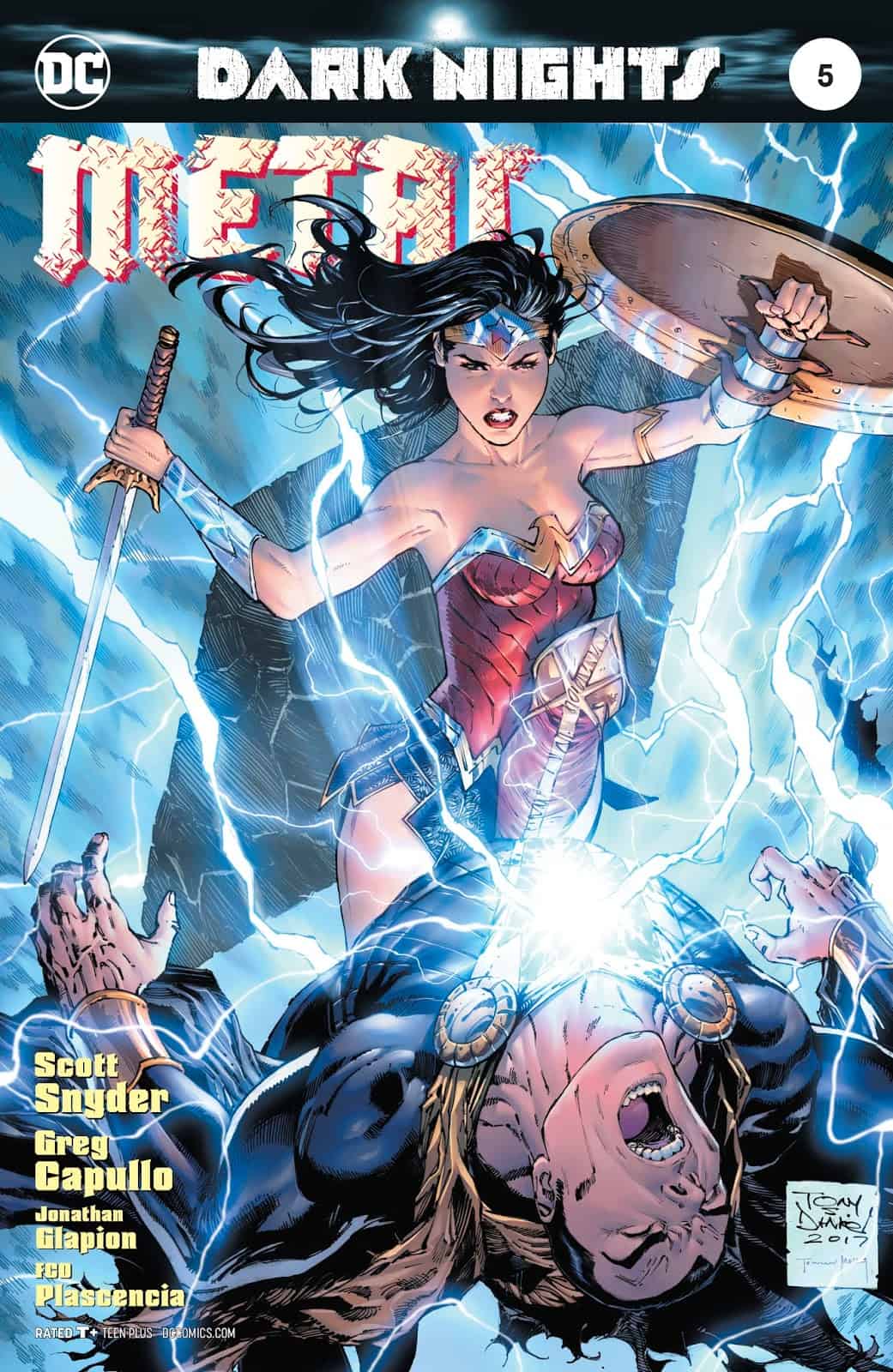 The Justice League is splintered, trying to track down the Nth Metal.  Green Lantern and Mr. Terrific are held captive by Starro.  Aquaman and Deathstroke are below Atlantis.  Wonder Woman and Kendra are seeking Carter Hall’s mace, but Kendra has transformed into a dark metal version of Hawkgirl as Black Adam shows up.  And Batman and Superman have escaped Barbatos’ engine to travel to the World Forge to reverse the effects of the Dark, but when they arrive, they find that Carter Hall, Hawkman, has been completely corrupted by the dark energies and the Forge itself is completely dark.  All is lost.

Batman and Superman leap from rock to rock, trying to avoid Carter Hall’s giant hammer as the Forge of Worlds erupts in fire.  They fall into nightmare after nightmare, while Batman (interestingly enough because usually, you envision Superman as the optimist) tries to hold on to hope, looking for the last bit of light in the Forge.  Aquaman and Deathstroke, beneath Atlantis, find themselves teleported to the center of the world, the core protected by some sort of Atlantean hybrid technology, one he knew nothing about.  On Thanagar Prime, Green Lantern tries to reignite his ring but Starro is still preventing him from forming a strong enough thought.  Mr. Terrific reminds Lantern that they must get out to reclaim the egg, which is actually Plastic Man (seriously?) who can function as a superconductor of the Nth energies.  But they can’t break out of the cell.  Hope is gone…except for the prisoner next to them who shapeshifts to reveal himself as… 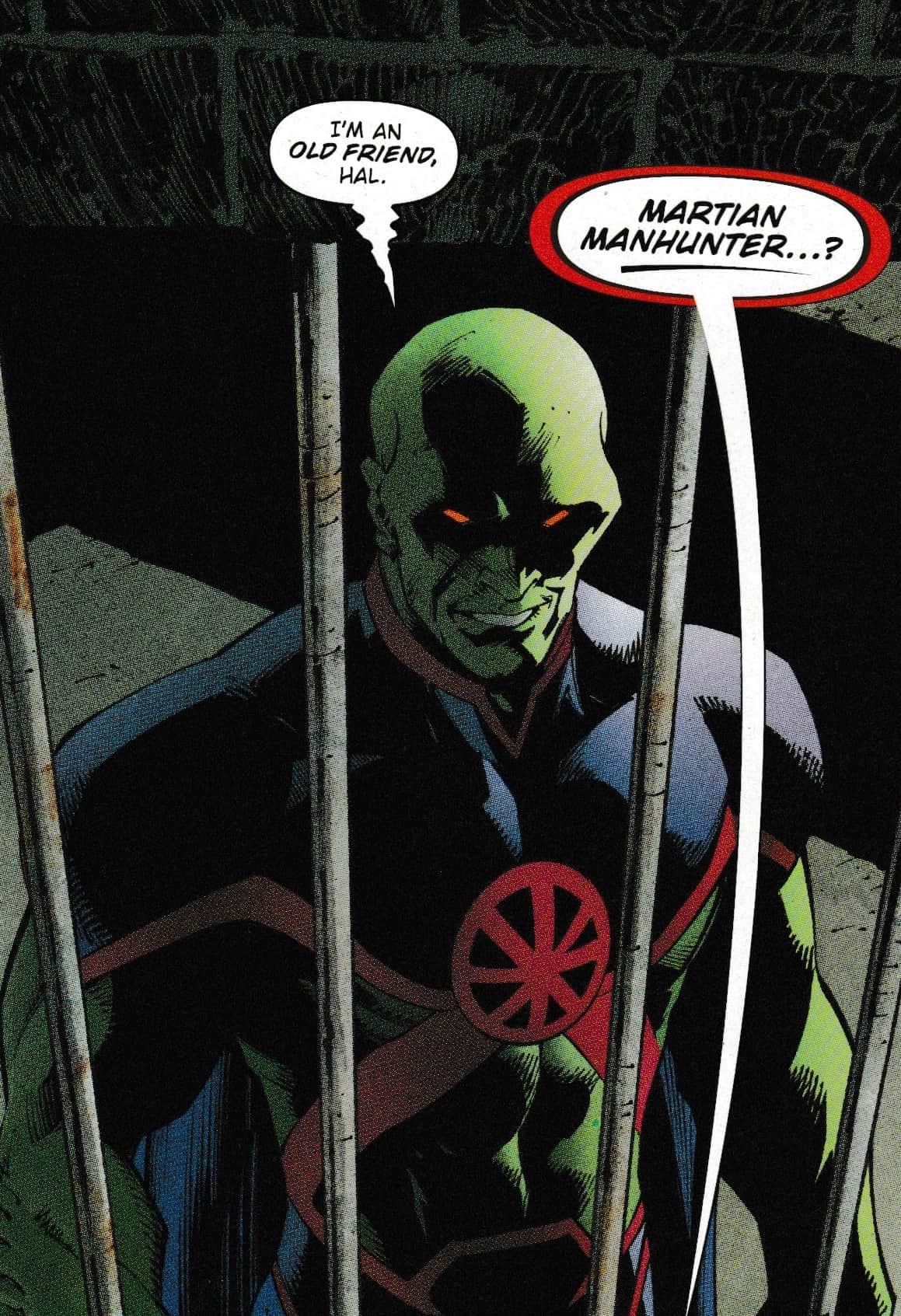 MARTIAN MANHUNTER!  I really did not see this one coming, but I had been curious where he was during all this.  Since he has telepathy, he’s able to block Starro’s mental influence over Jordan and Jordan is then able to free them.  And as Hal says, he’s going to “kick that space starfish’s ass.”

Wonder Woman lashes out at Black Adam and as they fight, she reaches out, trying to find any of the other League on the communicator.  With no luck, she turns to Kendra, who is standing there, refusing to help, watching the battle unfold.  Black Adam then blasts Wonder Woman through the wall. 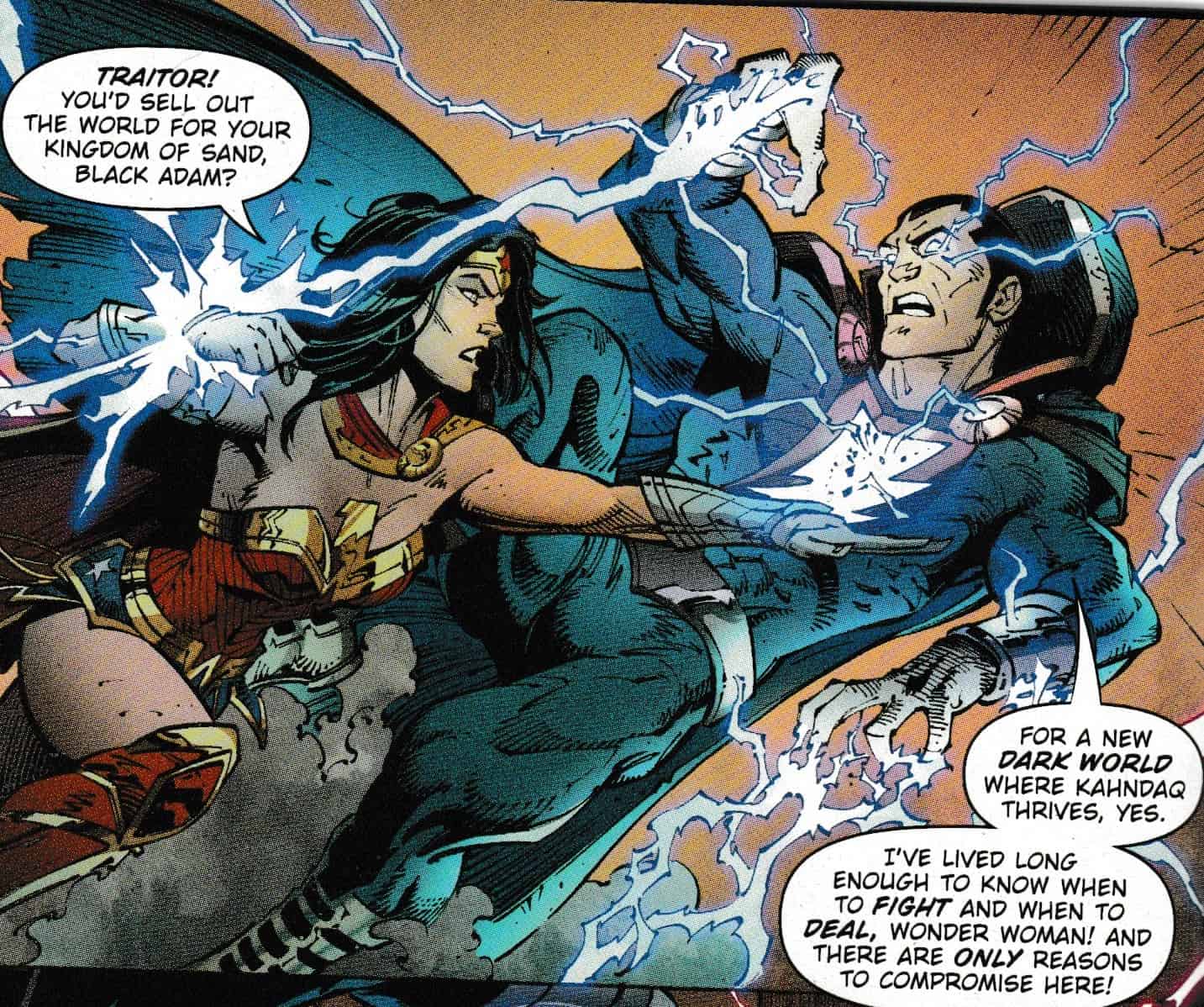 Carter keeps trying to smash Batman and Superman.  He’s been unsuccessful, but the two heroes are tiring.  Superman wants to retreat, but Batman still has hope…hope that the Forge isn’t completely dark.  He pleads with Carter, but the giant creature proclaims that Hawkman is dead.  When Batman agrees that Carter Hall is dead, the creature stumbles.  And that’s when Superman notices a spark in the Forge.

Wonder Woman looks up from the room she was knocked into and sees a crack on the far wall.  Through the crack, she sees Carter Hall’s mace, the target of her search.  She reaches through and grabs it just as Black Adam catches up with her.  He is ready to strike, but the energy is pouring off of him and getting absorbed by the mace.  And Wonder Woman clocks him with it.  Unfortunately, her victory is short-lived as she is shot in the head.  She isn’t killed but she is incapacitated and the One Who Laughs stands over her, gloating, holding the mace and a gun.

Underneath Atlantis, Deathstroke and Aquaman obtain some of the Nth metal from the core when suddenly Deathstroke is struck from behind with a spear.  When he falls, Aquaman is then impaled as well.  Behind them is Black Manta.  And appearing being Manta are three of the Dark Knights:  Red Death, Murder Machine, and the Drowned. 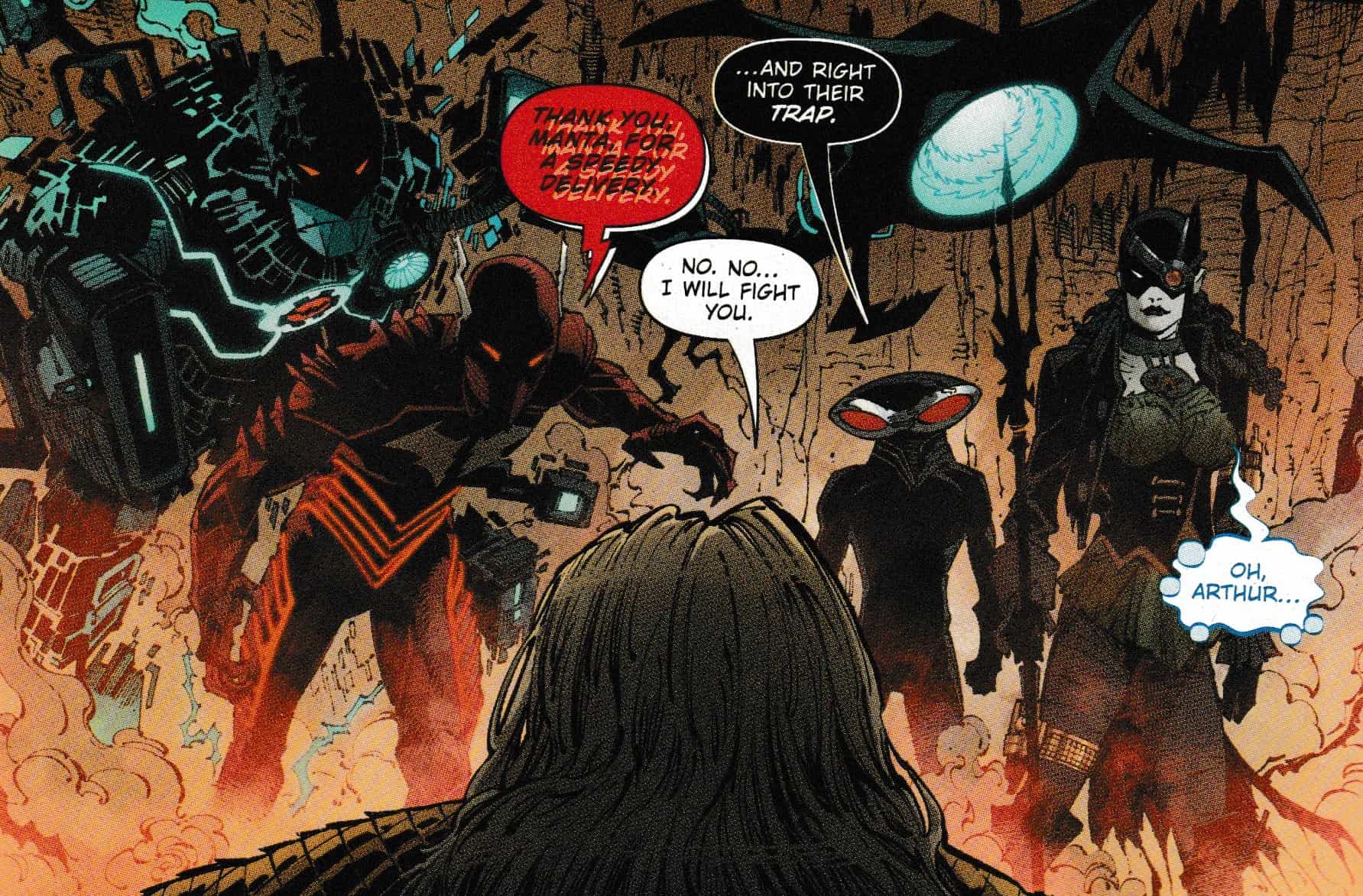 With the help of Martian Manhunter, Mr. Terrific and Green Lantern are able to battle their way through Thangadar to find Plastic Man.  With the egg back in their position, they prepare to use a giant cannon that is designed to lift the Earth back out of darkness.  However, the polarity has been reversed.  The culprits leap out of the shadows:  The Merciless, Devastator, and the Dawnbreaker.

The One Who Laughs gloats over his victory.  Thanks to the Justice League, the last of the Nth Metal in the universe was given to them:  Hall’s mace, the core of the planet, and the egg.  And with the cannon on Thangadar reversed, they can use it to cause the Earth to sink further into darkness.  It has already lowered enough so that Barbatos’ armies, all the nightmares of the Dark Multiverse, can come forth.  And thus the One Who Laughs leaves Wonder Woman to fight Kendra.

But as Wonder Woman starts to do battle, she presses her lasso of truth to Kendra’s side and suddenly Kendra sees the truth of who she is.  She keeps her armor but she remembers her true self.  The two approach the portal and leap through it.  There, they find the armies of Barbatos, horrible nightmare creations, reading to invade the Earth.

So I’ve been struggling over this review for the past almost week…and I finally figured out why.

As much as I’ve enjoyed Dark Nights Metal, this issue just felt like your standard beat-‘em-up story.  There was really no depth to it.  Maybe some great characters showing up (seeing Martian Manhunter had me cheering and I’m not even that big of a fan of his) and some big reveals (turns out Barbatos wanted the League to find the Nth Metals), but ultimately, nothing happened.

In a story where we’ve seen some mindblowing revelations and all-around creep factor, this issue was simply a setup story.  And I get that’s how it had to be.  We have another tie-in issue and then the finale with so much more left to go.  So we needed something to get the climax ready.  But after so much that Metal has given us, it still felt like just a bit of a letdown.

I mean, it wasn’t a bad issue.  Capullo’s art is phenomenal, as always.  There are plenty of fun moments, such as Hal Jordan mentioning he’s going to find Starro’s ass and kick it, and Wonder Woman’s lasso freeing Kendra, and Wonder Woman kicking Black Adam’s ass with the mace. 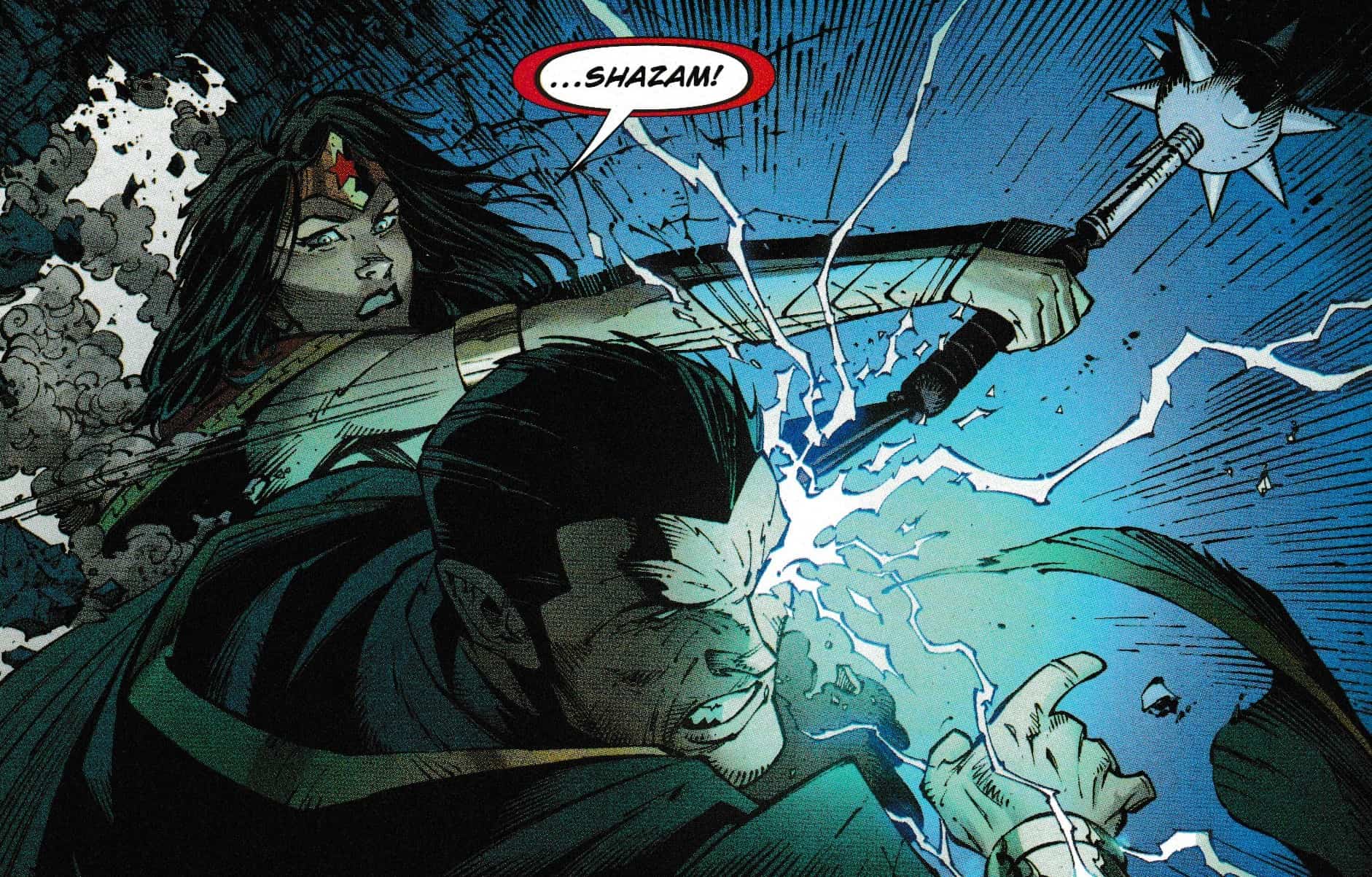 But all in all, it just wasn’t enough to rate as high as the other Metal books.  Give it a read.  If nothing else, you kind of need to before reading issue #6.  But considering what we’ve been through, expect it to be a little boring (which is sad because, on its own, it’s definitely a thrilling adventure…just not in comparison).

Final Thoughts:  It’s your standard set-up piece, designed to get everything in motion for the grand finale.  But unfortunately, it’s nothing more than that.  No real revelations, no real shock, nothing that we’ve come to expect from the Metal series.  It’s a good book, but if you’ve been a big fan of the rest of the series, you might find yourself wondering “is that it”.