Darth Vader #14: The Slyer the Moore, the More the Slyer

Darth Vader #14: War of the Bounty Hunters – The Blade Behind the Curtain 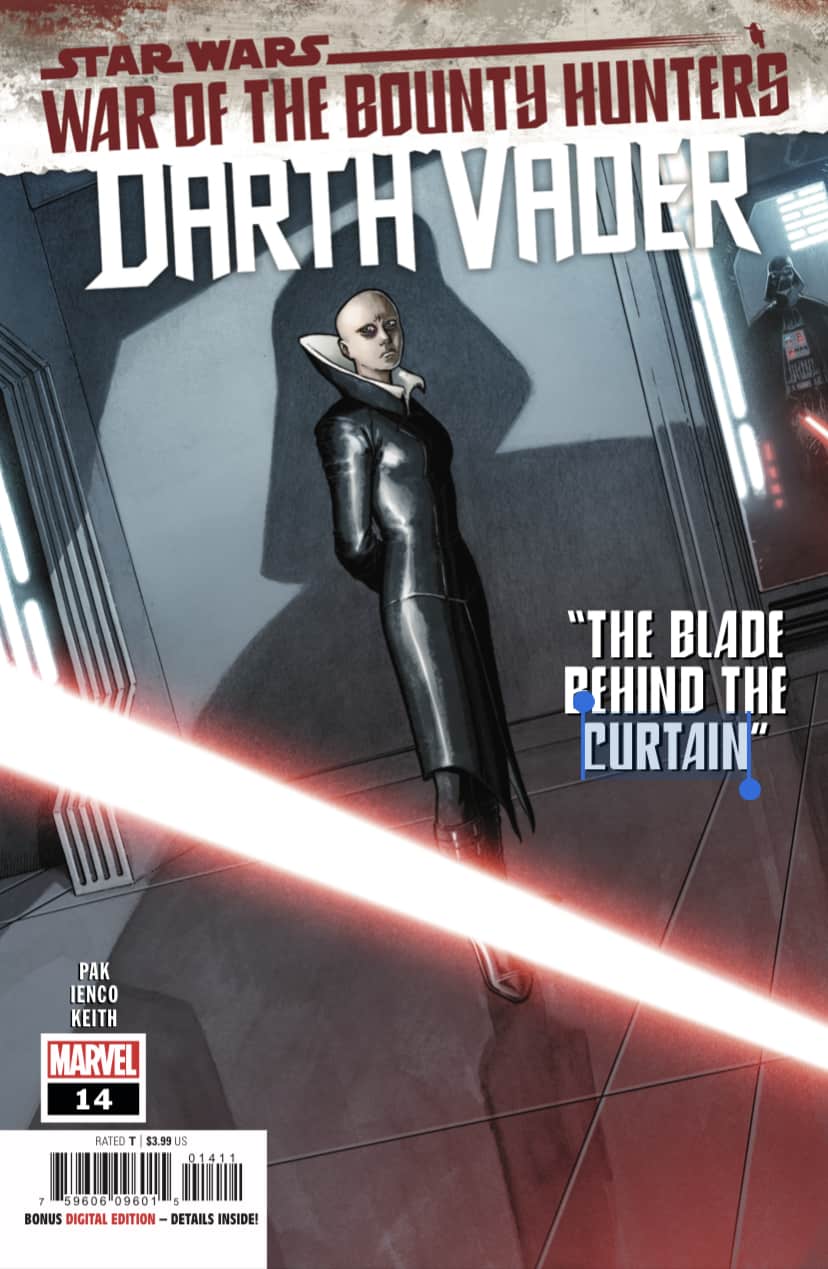 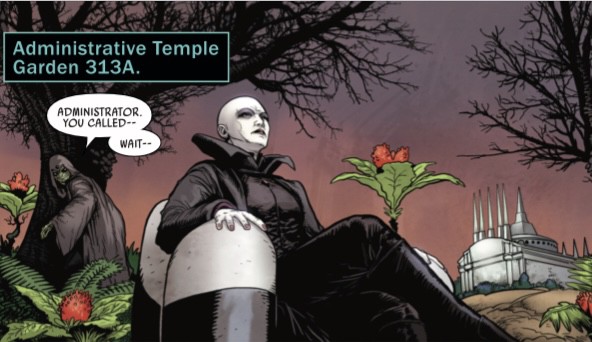 Vader has passed every test the Emperor has thrown against him, and he has regained his place at his masters side. Sly Moore has been shamed by her unsuccessful plan to destroy the cybernetic Sith. She struggles with her sense of duty to the Empire as well as her plot to finish the job she started to kill Darth Vader.

The events of “War of the Bounty Hunters” are now coming together among its many series. The auction of Han Solo has become a center piece to this second quarter of the overall series. This issue wastes little time in getting right to that point. This makes complete sense as the “Doctor Aphra” series has placed both Moore and Vader at the scene already. This issue is sort of a precursor to that. About half the issue takes place before the last one in this “Darth Vader” series. The purpose is to reveal Sly Moore’s motivation as to why the last issue ended with her and a group of hooded figures vowing to destroy Vader, having hired IG-88 who lost against the Sith titan. Once the issue gets up to speed with the last one, it focusses on the auction itself. It is clear that the conflict between administrator and Dark Lord is not finished before the issue is done, so it would seem the power struggle will continue. 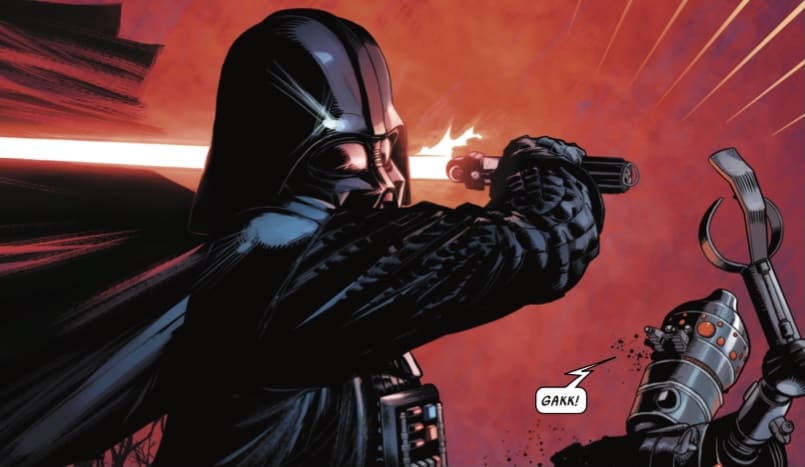 The most interesting thing about this chapter is the focus on Sly Moore. Ever present behind the scenes in the senate in Attack of the Clones and Revenge of the Sith, Moore gained her spotlight in the prequel trilogy by baking up Palpatine as one of his closest advisors. She even has had toys made out or her. Unfortunately that is where her story essentially ends. She had never really been all that much a fleshed out character, so it is refreshing to see her get a much more prominent role in this series. Her counterpart, Mas Amedda, has had much more backstory as well as future tales as he eventually becomes the public face of The Empire after it falls. It makes perfect sense to use Moore instead of Amedda here as he has had much more content thus far. Giving a well known, but under developed character a grander place in the overall storyline is one of the best things Marvel’s “Star Wars” has had to offer. It seems one of the goals of all their series is to bolster the events, characters, and locations seen briefly in the films. Moore’s involvement in this issue is a perfect example of that. Her story also ties the original and prequel trilogies together better, being a prequel character into a original trilogy era story. 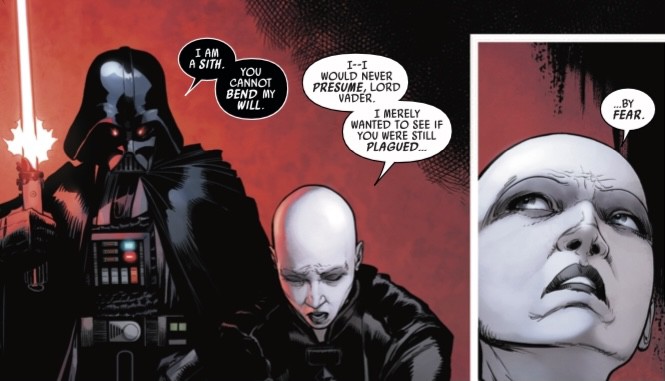 The only place this issue falls short is in the art. Not a particularly action packed issue, the story relies on facial expression and body postures to convey emotion. Although this is accomplished well enough, the expressiveness of the characters is stagnant and a little boring, which is completely unrepresentative of the series up to this point. Even the cover art is a bit stale. Nevertheless, this chapter offers a lot of backstory and brings the series up to speed with the rest of the larger “War of the Bounty Hunters” multi-series event. Yet iIt seems a waste to basically disband and destroy Moore’s cabal of hooded would-be Vader assassins before they can really do anything. However Moore survives the issue, possibly to become a thorn in Vader’s side again, or perhaps ultimately another of his victims in a parsec long list of victims. 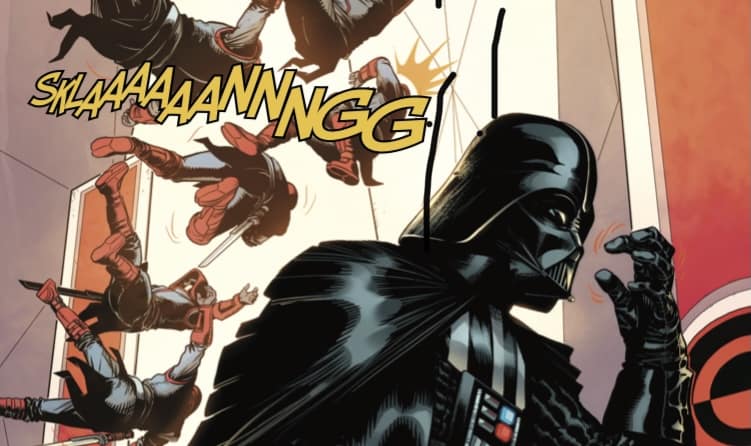 Sly Moore’s subplot aside, it is time to get back to Vader and his plans to use the frozen Captain Solo to lure out and defeat his greatest threat, his own son. With his abrupt interruption of Crimson Dawn’s auction of the infamous smuggler, things are bound to heat up further.

Darth Vader #14: The Slyer the Moore, the More the Slyer