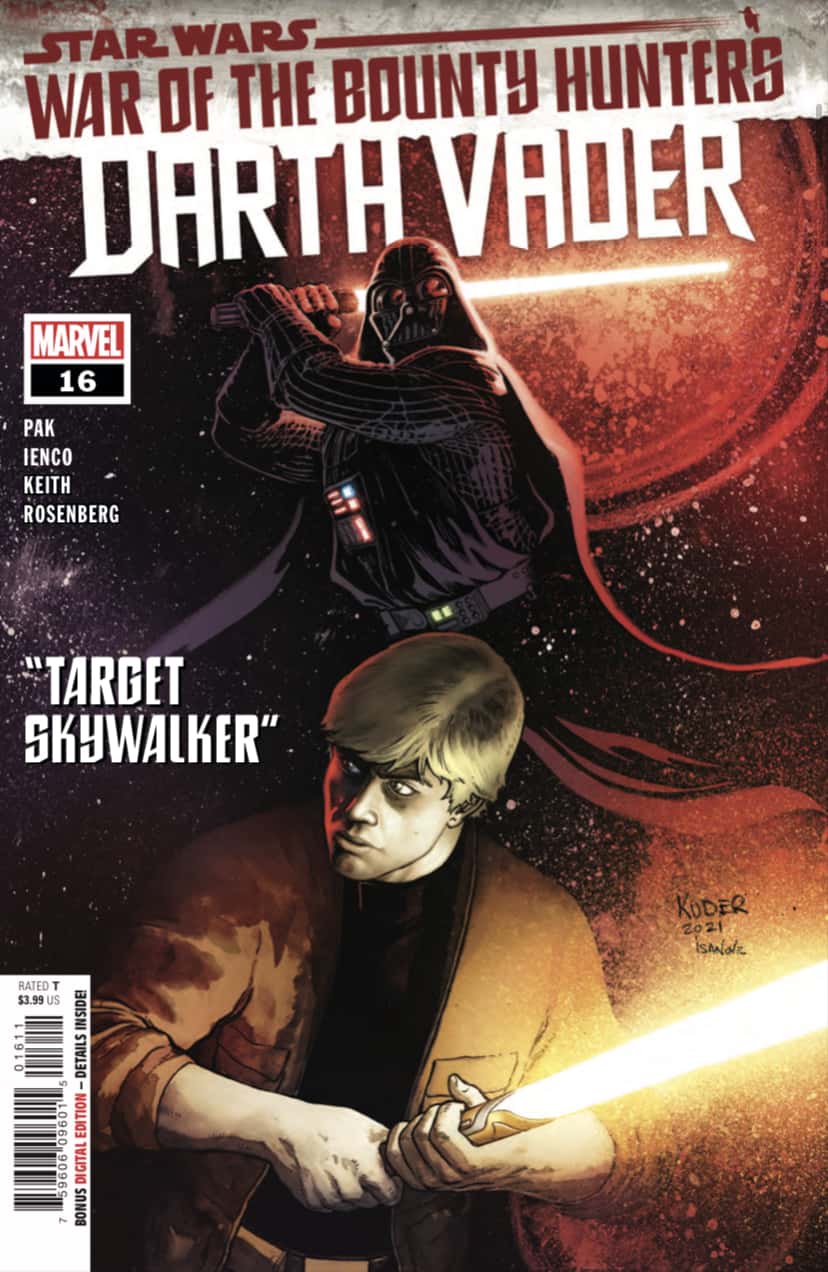 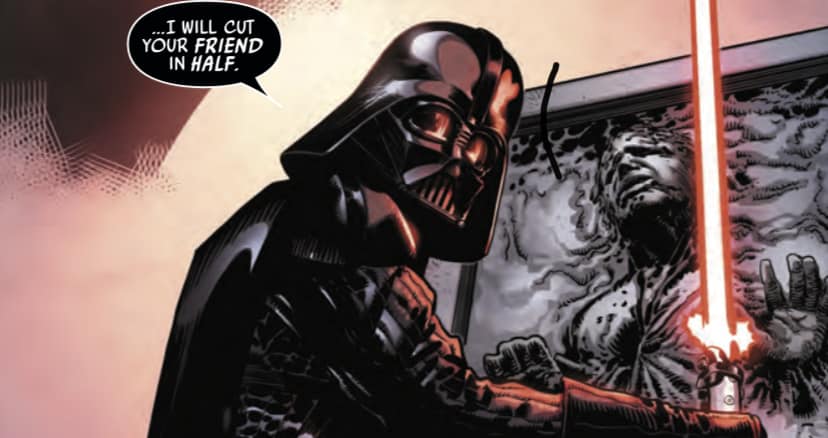 Having finally tracked down Han Solo to Crimson Dawn’s flagship Vermillion, Darth Vader threatens to cut the smuggler in half if Luke Skywalker does not face him. Leia, Lando, and Chewbacca await the Rebel pilot to come to Han’s rescue. Unfortunately Luke is not yet prepared for such a battle. Instead he attempts to draw the Dark Lord away from his friends.

The “Darth Vader” series finally catches up to the proper timeline of “War of the Bounty Hunters” in this new issue. Until now it has stood a bit separate from the rest of the event, taking place well before Crimson Dawn’s auction of the frozen Han Solo. While the other series have pretty much all placed him there already, fighting Qi’ra and threatening to kill Han, this series has shown more of his journey to get to that point. The series took a striking design turn when “War of the Bounty Hunters” began. Until the event started, the series had a unifying theme of showing Vader’s thoughts and memories in red, mimicking how he physically sees the Galaxy through his helmet’s lenses. That went away once the multi-series event began. However this issue bring that back for the beginning part of it, showing Vader’s thoughts about Luke tinged in that unmistakable red style. It only lasts a few pages and then returns to the art theme much more in line with the past few issues, but it is a welcomed callback. 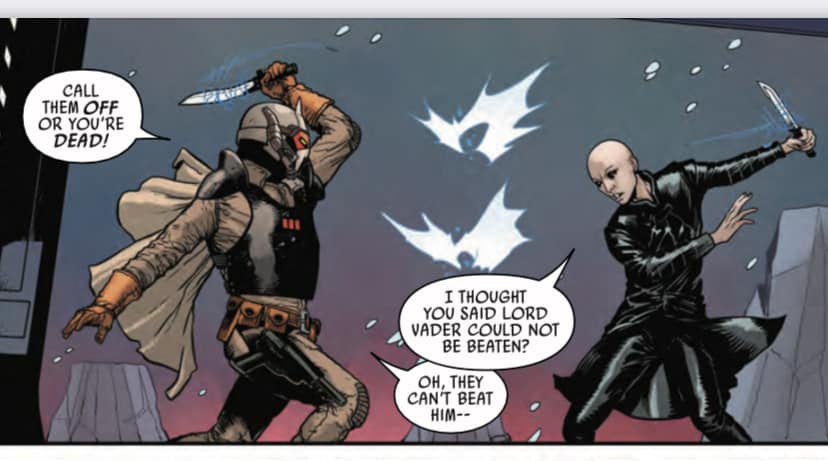 A lot of the issue deals with Vader chasing Luke’s X-Wing around space in his Tie Fighter. Luke succeeds in getting the Sith Lord off of the Vermillion and away from his compatriots. Pirates, droids, and even Hutts get in their way, but merely act as a minor distraction for Vader as he pursues his son. On top of all this Sly Moore attempts to rid her beloved Empire of the dangerous Sith cyborg and Vader’s current companion, Ochi of Bestoon, must try and stop her. This chapter has many layers which add very much to the excitement of this issue. Bokku the Hutt, who has been basically just pushed around by Vader up to this point, gets to take a more commanding role. Ochi and Moore, two mostly uninteresting characters on their own, get to have a surprisingly exciting fight. Luke is uncharacteristically running scared, leaving Leia and her crew disappointed. Even Artoo repeatedly questions Luke’s actions while they fly around in their X-Wing. Everything in this issue seems to be shifting in the opposite direction, except for Vader. Darth Vader goes guns blazing through any and all advisories standing in his way to get to Luke. His resolve has never been stronger, making this truly a comic issue worthy of having the title, “Darth Vader.” 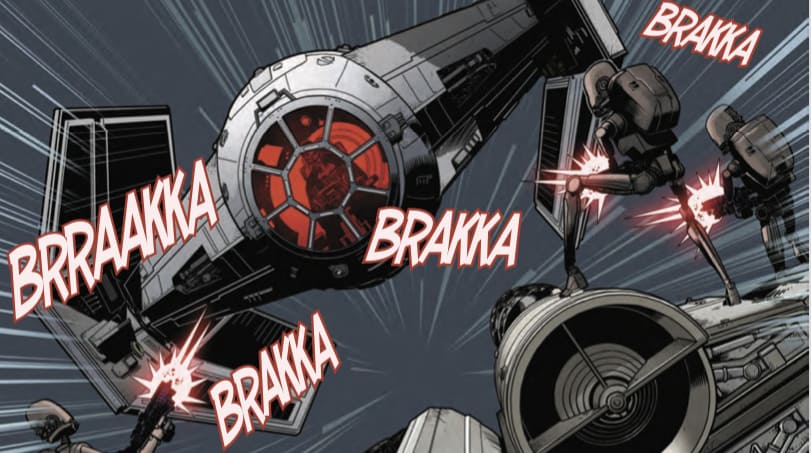 One of the things that sometimes gets lost in various “Star Wars” titles it that classic trilogy feel. It isn’t enough to simply put the characters together and expect it to just feel like the movies. Many previous comic series and books for decades have fallen into that trap. This chapter is a nice exception to that rule. The appearance of Vader’s custom Tie Fighter chasing Luke’s X-Wing very much feels like the original film. Luke adventuring in his pilot gear also has a nice echo of not only A New Hope but also his part in the Battle of Hoth in The Empire Strikes Back. Of course there is plenty of new elements, but they tend to blead into  background of all the classic images. They newer elements are not without merit either. Ochi of the sequel trilogy fighting Moore of the prequel trilogy provides a kind of bridge to unify the entire Skywalker Saga. This series has been extremely good at doing just that, and is in many ways a secondary theme to Vader’s red memories. This issue accomplishes being classic, new, fully engaged in the “War of the Bounty Hunters” larger series, as well as still connecting the events between The Empire Strikes Back and Return of the Jedi. All in all it a very well compact example of how a “Star Wars” issue can indeed pulls all its various elements together to create an engaging story. Hopefully that continues into the next issue. 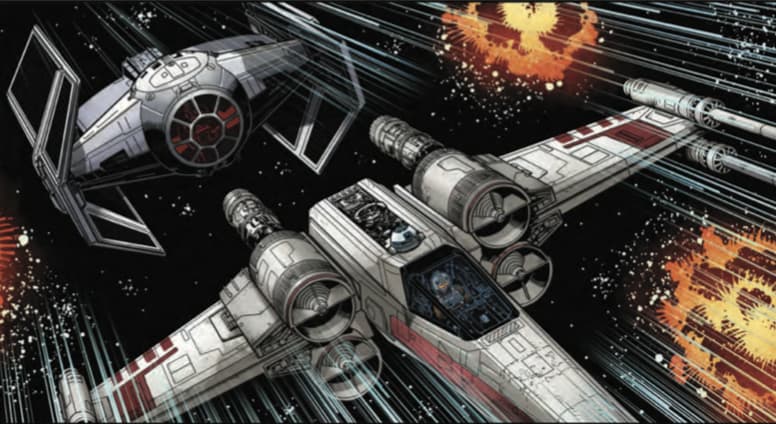 Luke has managed to get Vader’s focus off of his fellow rebels. However it seems that Han is being transported away from Crimson Dawn and is flying right into Luke and Vader’s path. Still being dogged by his dark father, Luke will need to come up with a new plan. He can’t run forever.