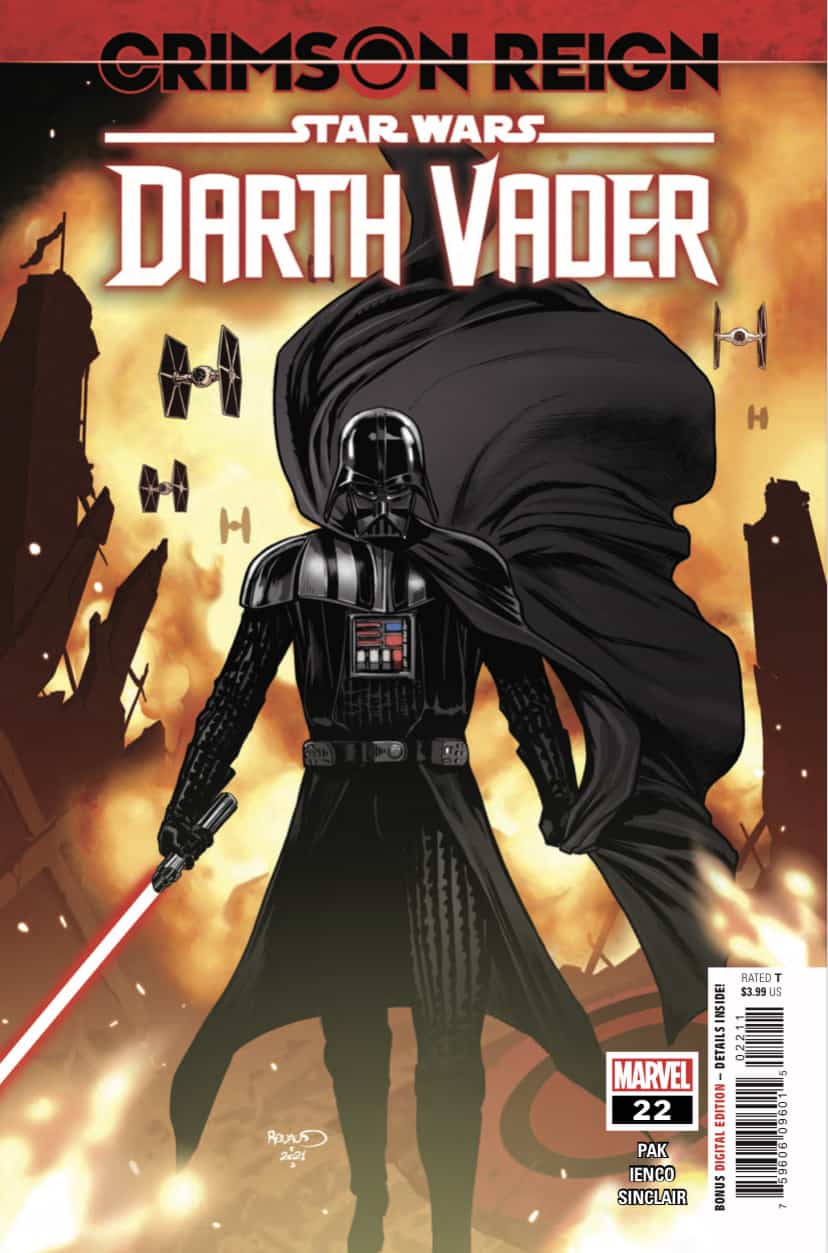 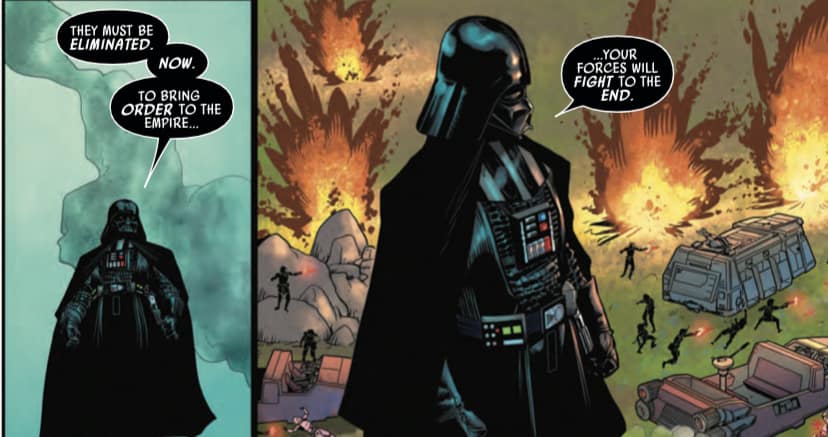 Darth Vader has caused chaos across the galaxy as he attempts to cut the heart out of Crimson Dawn. He has revealed that he has always known of Ochi and Sabe’s plans to destroy him. Instead of killing them, Vader seeks to use them to get closer and closer to Crimson Dawn.

Since this series has begun it has gone through some amazing changes. What started out as somber tales filled with tragic flashbacks has become one of the most action packed, betrayal filled, and dramatic series in all of current “Sar Wars” series. This issue continues with that trend by pitting Ochi and Sabe up against ferocious monsters, having dramatic shootouts, and containing many plot twists and turns. Vader has been on a huge winning streak the past few issues and it shows here. He has placed every piece on the chess board and watches it all play out. The result is chaos everywhere. No one trusts anyone. The Empire doesn’t trust Vader. Ochi and Sabe don’t trust him. Even his band of Crimson Dawn hating heroes are starting to doubt him. None of it matters as long as Vader gets what he wants. This chapter is Vader at his most manipulative and powerful. This issue shows readers why the series bears the name “Darth Vader.” 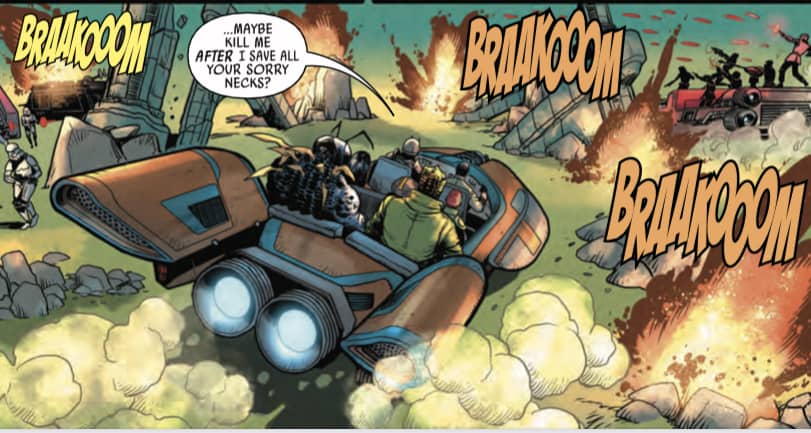 The events in this series have little to no impact on the larger saga. While Lando, Leia, Luke grow into who they will be in Return of the Jedi, Vader has hit a character development wall and is basically just doing his own thing up until the events of that film. This leaves a huge sandbox for Greg Pak to play in because Vader isn’t tied to anything else at this specific point in the timeline. And play he does. Giant monsters, even larger giant monsters, troops, aliens, droids all fight because Vader demands it. This issue does takes a very interesting turn to add a little something new to keep things fresh. Vader is certainly using Sabe to meet his own goals, but she is learning about him to. It seems like they may be able to work very well together. Ochi continues to play all sides, which further plays into Vader’s plans. 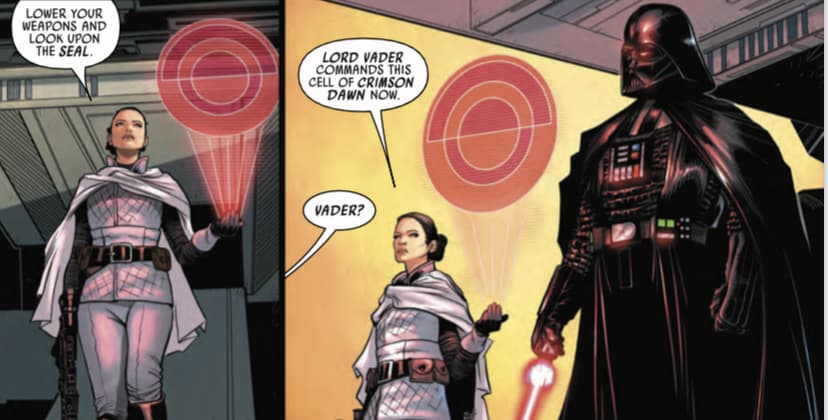 This is a particularly colorful issue with some stunning art. To flip through this issue is to flip through a rainbow. Each set of pages seems to have its own colorful flavor. The bright images are accompanied by very detailed art in a variety of settings and battles. There are scenes in mountains, ruins, starships, around holographic battle tactic tables, etc. The issue depicts many strange and detailed creatures, vehicles, and explosions. To put it bluntly, this issue was very exciting. The story doesn’t further the saga of Darth Vader much, but it does make for a great chapter of this story arc. This issue is so chaotic, that it is impossible to predict where it will go next. 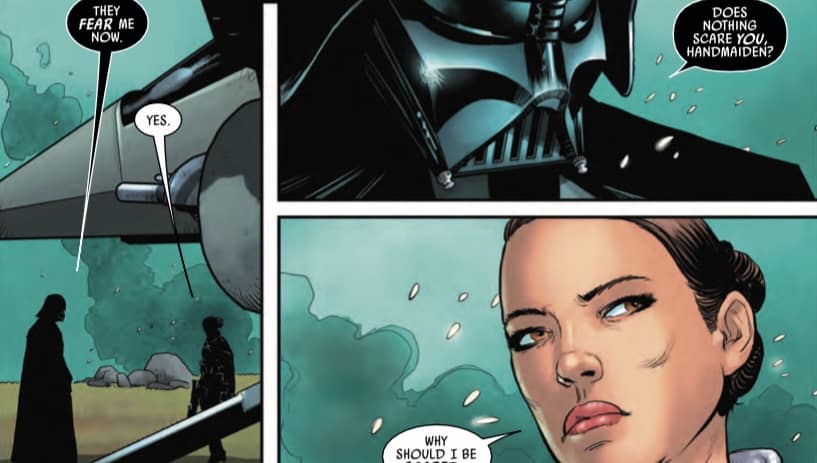 Sabe knows a secret about Vader. Vader is able to crush her at any moment. The two have goals that align and pasts that conflict. This could lead to and explosive climax.