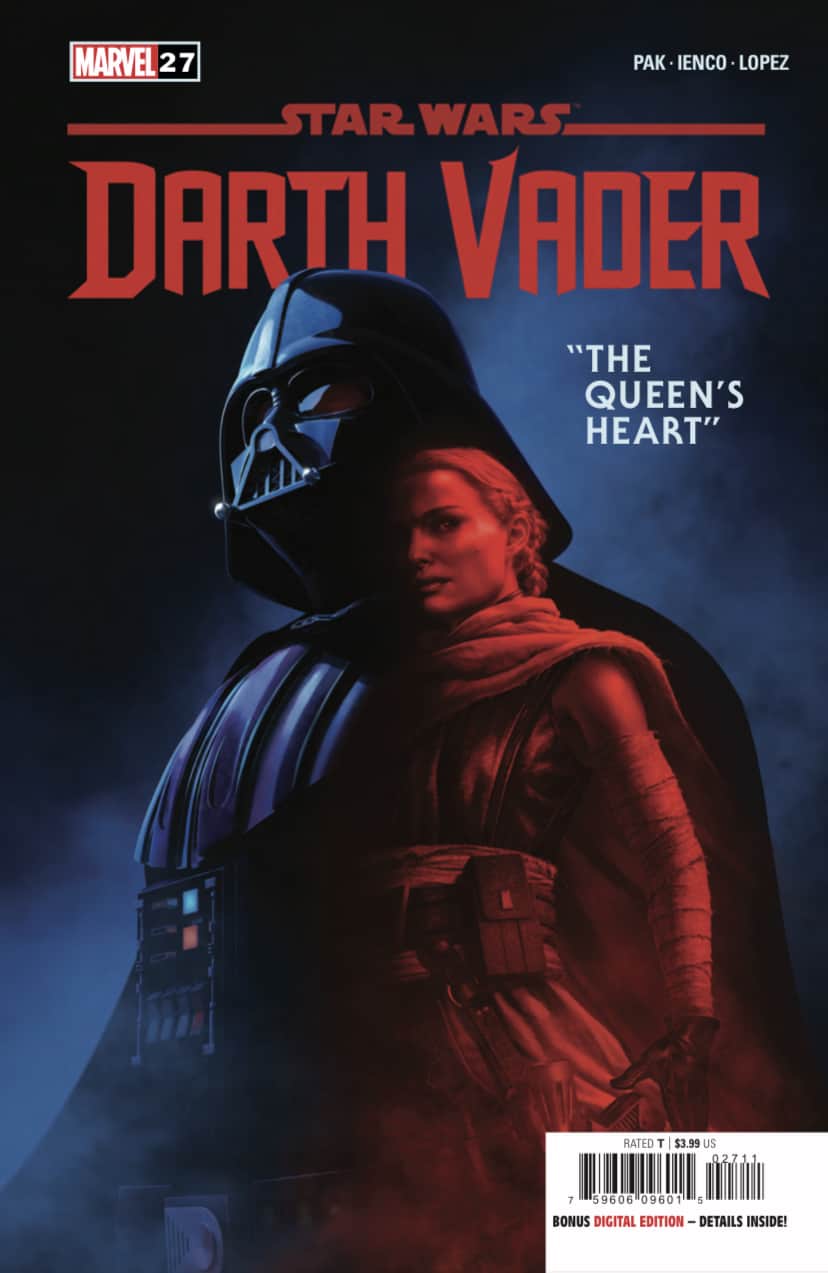 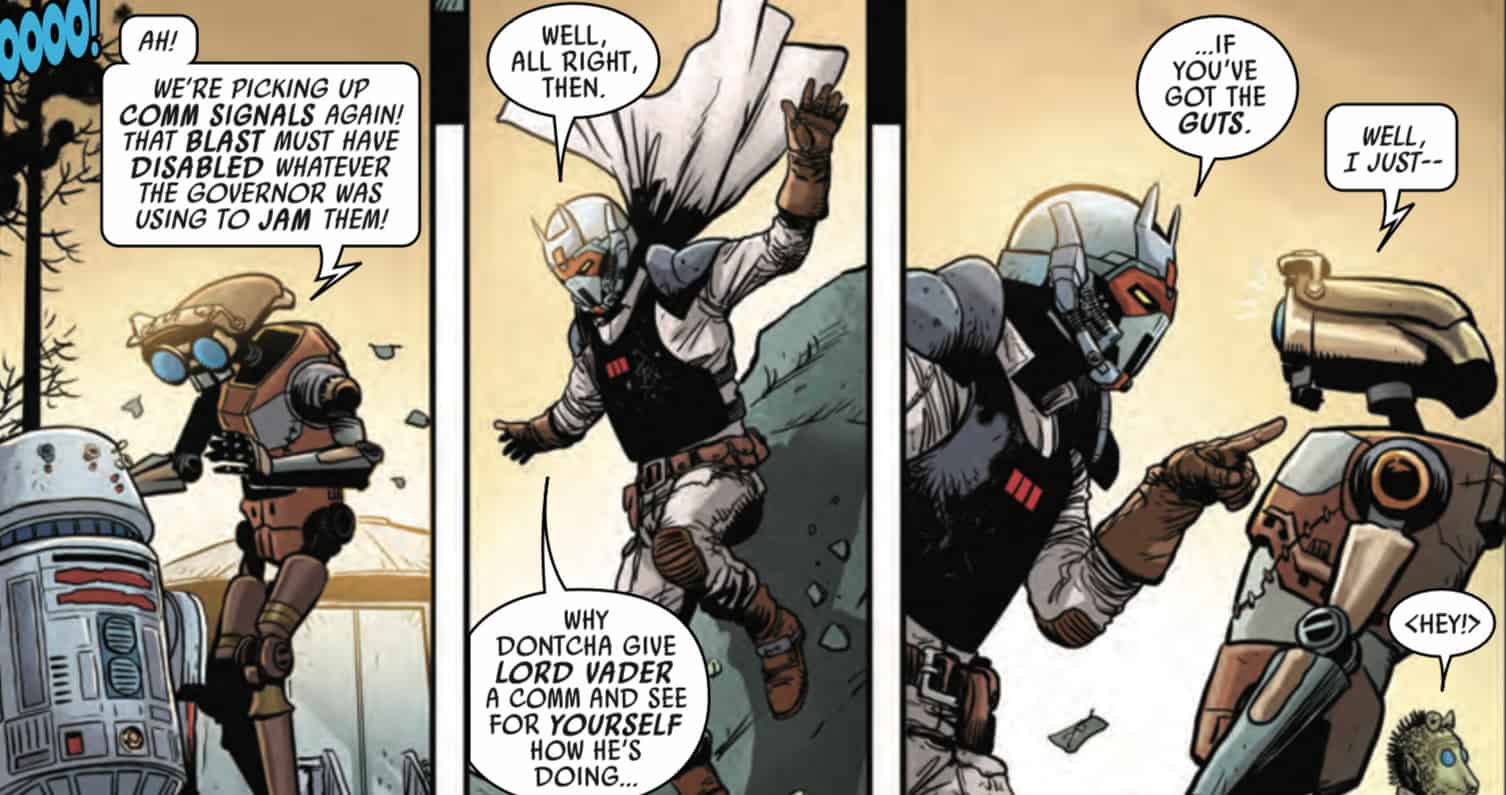 Sabe, former bodyguard to Padme Amidala, and Vader have teamed up to save a dying planet from its corrupt leader. Not only is Sabe a constant reminder of Anakin’s past, but the presence of two of Anakin’s childhood friends have also put the Dark Lord in a rare protective mode.

This series, now closing in on thirty  issues, has dealt with Anakin’s memories haunting Darth Vader. The series has sometimes shown him as a victim or beat down into practically nothing. However this story arc gives Vader a little time in the sun to be a hero in his own title. This issue in particular give him a much needed win, surrounded by childhood friends of the man who’s body he now possesses. Time is short for Vader and Anakin. The gap between the current timeline and the events of Return of the Jedi draws ever nearer, as does their impending death therein. This arc gives Vader a chance to be that Clone Wars hero one more time. If there has been a consistent message in this series, it is that Anakin is still very much a part of Vader and has been since he discovered and met his son. This issue gives him a win against an enemy and tighter bonds with his allies. It even gives him a sense of defeating evil, which may influence future decisions. Even the staple device of Anakin’s red tinged memory flashbacks is used only once and briefly in this issue because it is about Anakin alive, real, living, and breathing, and not limited to just memories. The Jedi has returned, in part. 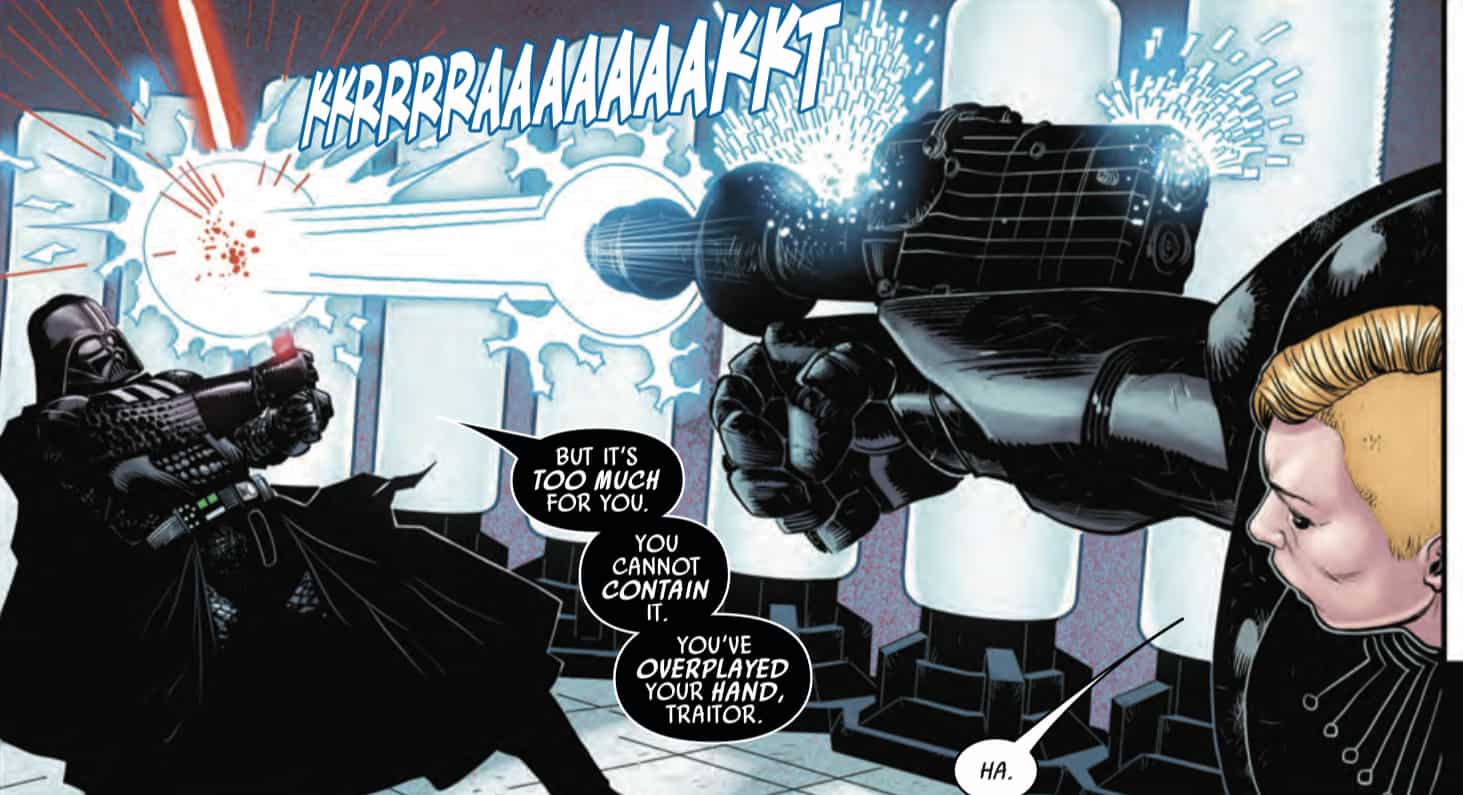 The only real drawback to this series is the other characters. That doesn’t really distract from the story much since they are basically background methods of telling the narrative, but as characters they come off as dull. Ochi of Bestoon is useless in this issue and offers very little comic relief. Wald and Kitster are fun throwbacks, but aren’t exactly fleshed out characters. The two droids seem like Artoo and Threepio rip offs, but not charming. Even the Imperial villain is completely forgettable. She even gets to have the most page space and the most fighting action she has had all story arc, and yet still she seems like a throw-away character. This story arc is simply all about Vader and all other characters are just overshined as pawns in that tale. The exception is Sabe. Not only has Sabe had a ton of recent backstory through a handful of novels, but this series seemed to be the follow up to those to make her history more robust. She has changed much in this series alone, starting as an underground operative on Naboo, to becoming a Crimson Dawn spy, and then ultimately working with the cyborg that used to be married to her late best friend. This issue gives Sabe a choice and despite what the outcome was, it was certainly a different choice than she would have made much earlier in this series. 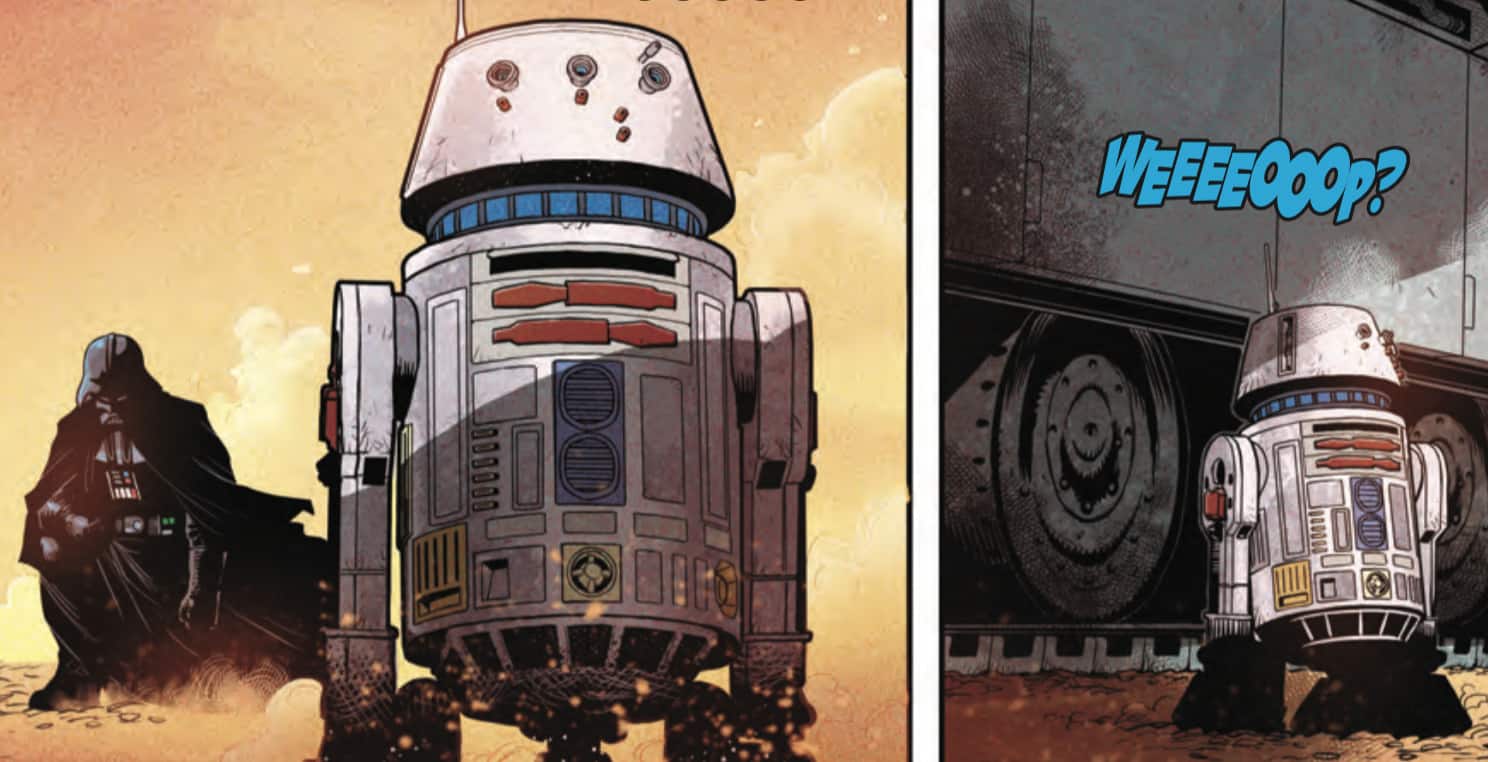 On a technical level this chapter offers quality work, but nothing ground breaking. Colors and contrast are there, but not in a way that stands out in this series, or any other “Star Wars” titles either. It’s a great story which enhances the readers understanding of Vader, but that’s become par for the course in this series. It has an impact on the overall saga, but in a way that makes it almost okay to pass by. Action is again confusing where is isn’t always clear what’s going on, but no reader should really feel too lost. There is a consistency in the level of art throughout which carries the narrative better than the depiction of action, which is often shown on pages with no text to its detriment. This could have been avoided with some inner-dialogue from Vader to describe things better, but sometimes his silence drives his character. This was unfortunately not one of those times. 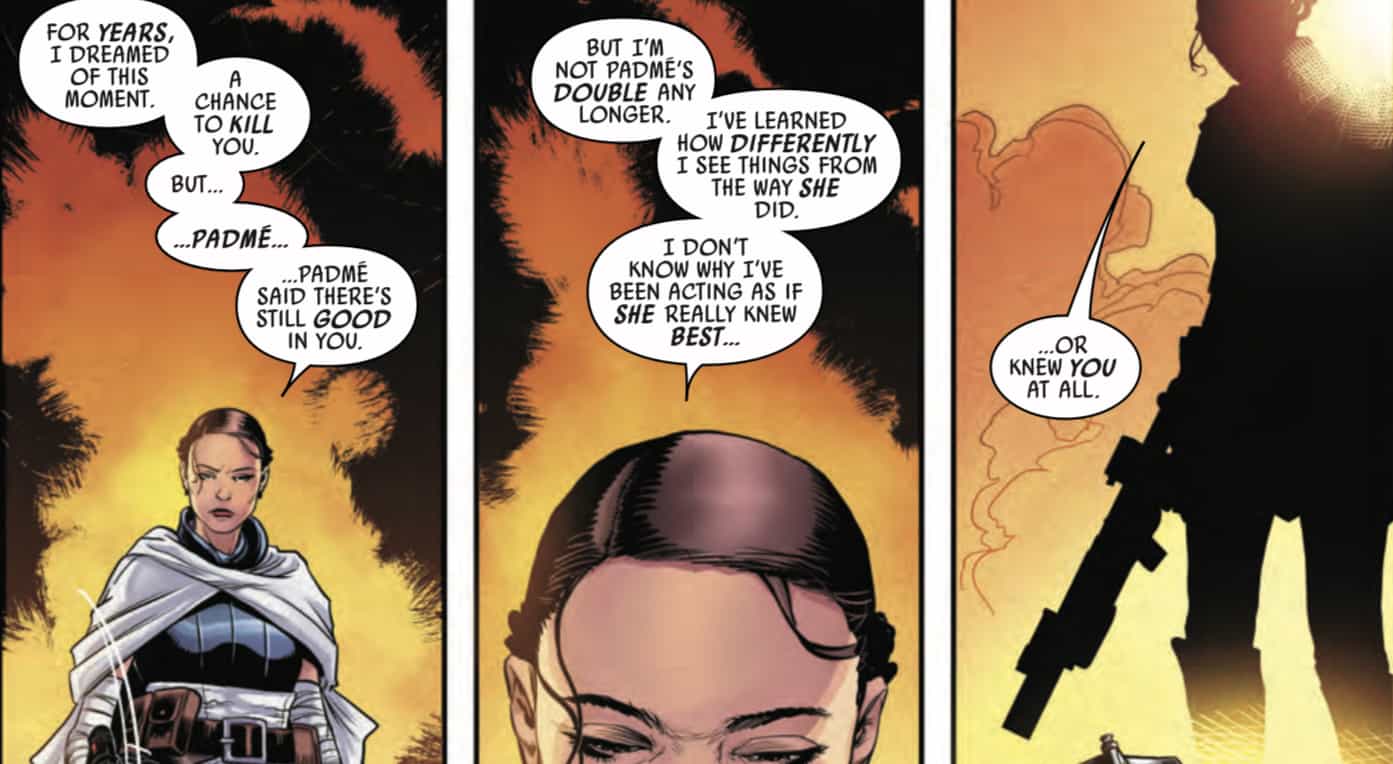 It seems like this story has wrapped up for now, but new stories are always coming. Sabe has made a place for herself in this series and promises to continue on into the next arc alongside Darth Vader.