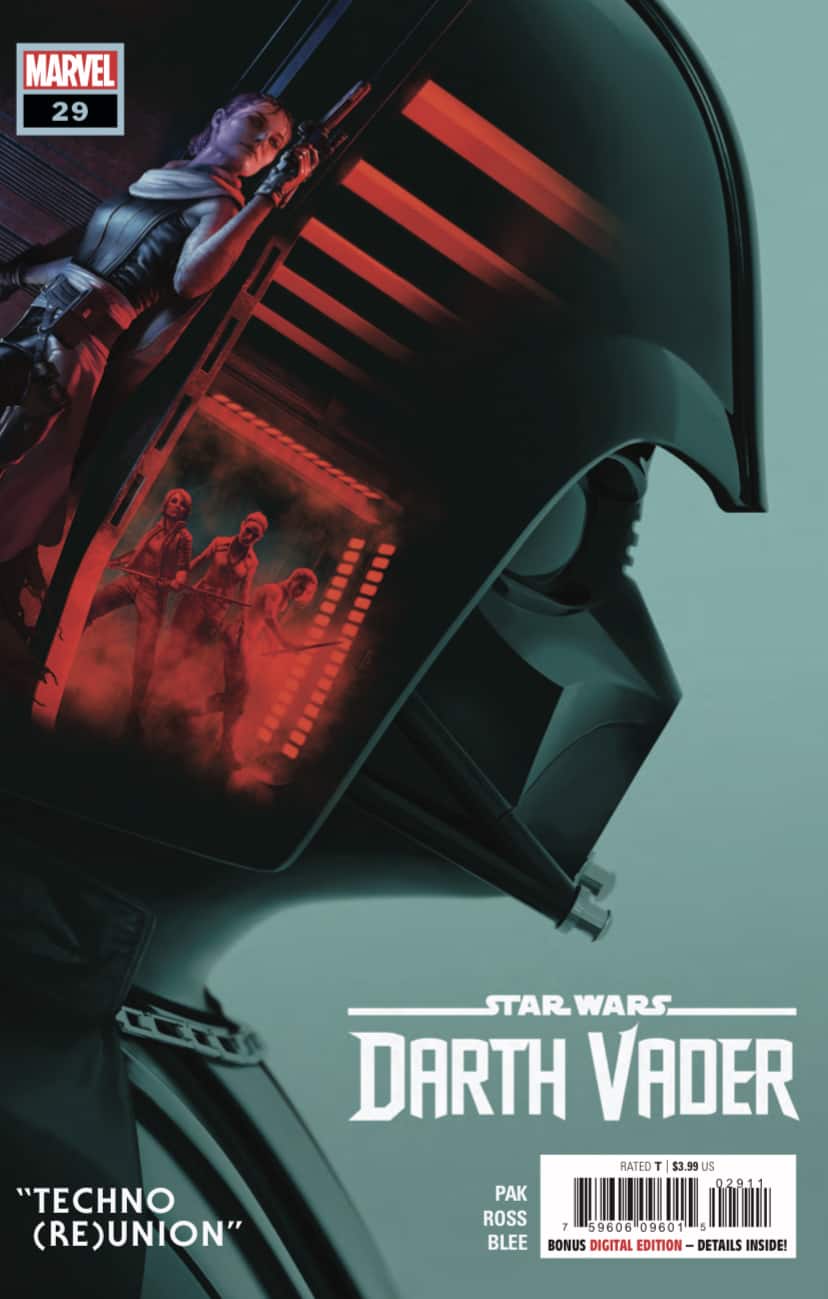 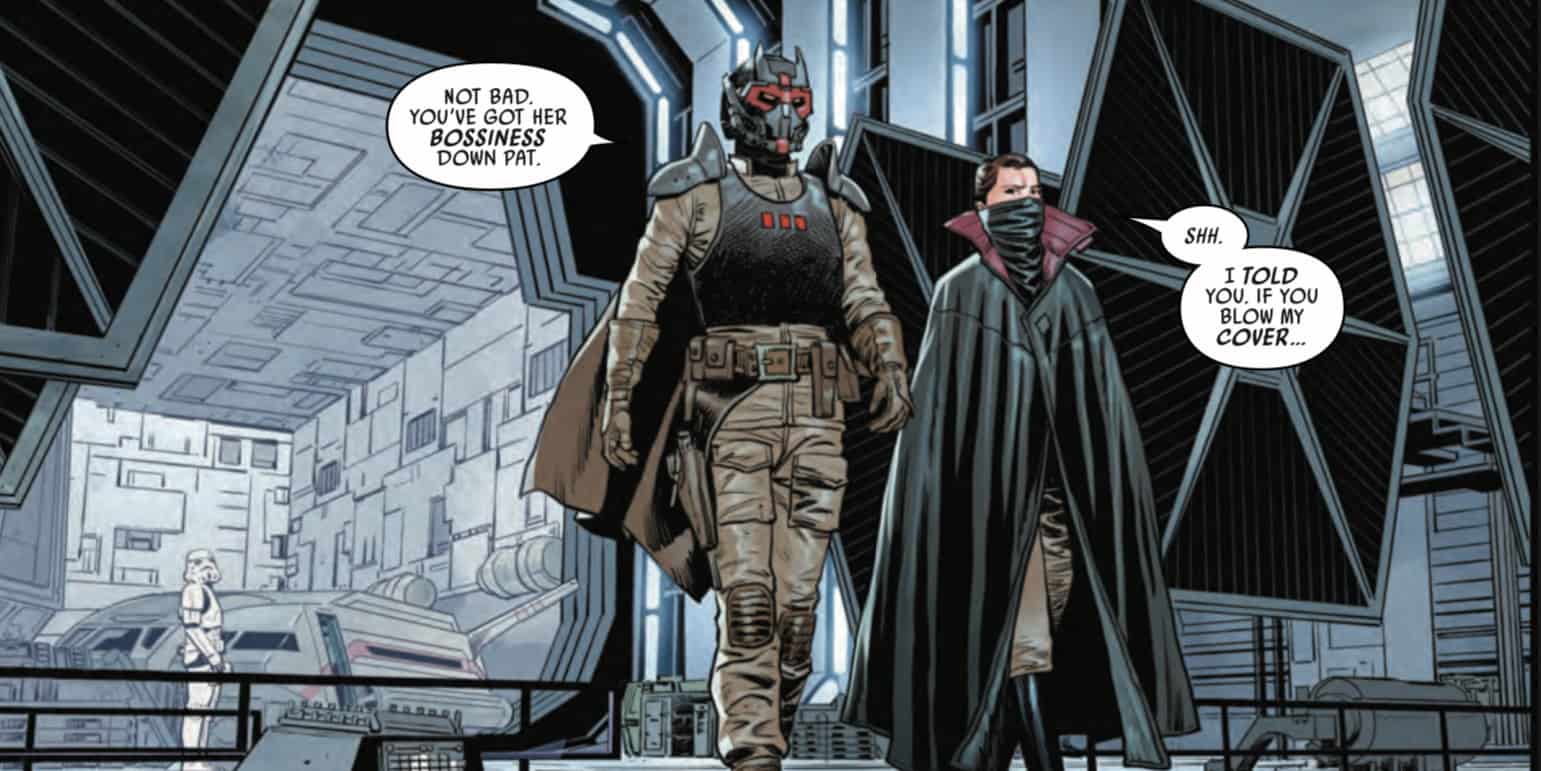 Sabe, former handmaiden of Padme Amidala, has become one of Vader’s commanders after impressing the Emperor. Meanwhile Dorme and Ochi of Bestoon attempt to infiltrate Imperial ranks in a search for more info on Sabe’s current whereabouts.

Sabe has dominated this series as of late, often being the central character or at least second to Darth Vader. That is certainly true of this story arc. This issue, although very much a Sabe issue, turns sharply to focus on one of  Padmes’s other handmaiden’s Dorme. In the past couple years, the handmaidens of Amidala have gaining a lot of strength as characters in “Star Wars” Not only have they been a focus in this series, Sabe especially, but they were also featured in a trilogy of YA novels about their time with Padme. To suddenly focus on two of them in the same issue is a bold and exciting direction for both characters. These were heavily trained doubles for the Queen of Naboo, so it stands to reason that they could double for each other as well which is featured in this chapter. The addition of Dorme in to series is a wrench in the machine, but one that may cause improvement as opposed to destruction. She adds some positive chaos to spice up the series. 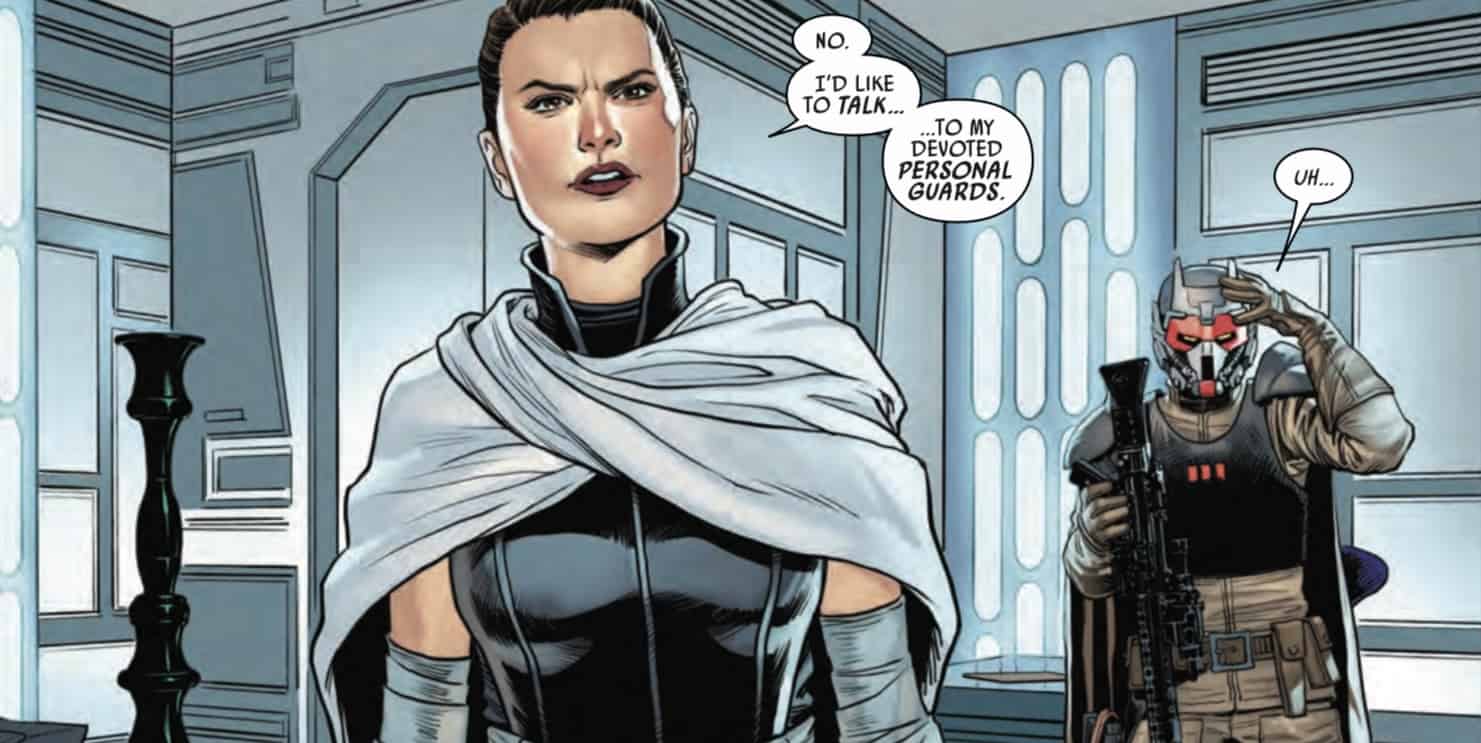 This series has struggled a bit to introduce new characters that are interesting and worthy of repeated usage. Ochi is used far too much because of this, and is a character that readers either need a break from or need to see in a new light. This issue give’s him the latter by teaming him up with Dorme, changing his direction and allowing Sabe to have adventures independent of Ochi or Vader at all. Incidentally it gives Vader a second agent who is also a double of his dead wife, forced to work with him or die. Sabe continues to be the main character of interest and is consistently evolving. This issue takes a few bleak moments to outline the destruction she has caused in her wake of hew mission. It is clear her hands are not entirely clean herself, which makes the formerly noble agent much more complex.

For a “Darth Vader” issue, the Sith Lord does not appear much in it. He is there and has plenty of dialogue, but he has shifted from main character antihero to background character for Dorme. He is barely a part of Sabe’s tale at all. Because of that this issue stands alone in its narrative shift away from Vader as protagonist. That is not to say that the issue goes way off the rails. A familiar face in the form of the droid warrior Gee-Ninty shows up to ground the issue to the “Darth Vader” series. The also issue still has the red colored memories of Anakin Skywalker as well as red used appropriately elsewhere in this chapter, although not as much as other issues. The color scheme seems to borrow from “The High Republic” and focuses a lot of emphasis on lighter colors and yellows. This shift also mirrors the shrift the narrative takes in this issue by getting away from the vivid, almost violent, colors of Vader’s focus and letting the audience see the lighter side of saber and Dorme’s perspective.

Vader now has two handmaidens working for him to do his bidding and that of his master. Yet what influence will they have over him as they cause him to remember Anakin’s lost wife? Only time will tell, and for Darth Vader time is running out.