REVIEW: Darth Vader #12 (And You Think YOUR Job Sucks!)

Vader returns to Coruscant with one goal:  to find out who in the Imperial Palace ordered his assassination.  But those behind the mercenaries aren’t done yet and it’s not even sure if Darth Vader will make it home in one piece!

Vader is on the hunt for people skilled in the Force.  But while investigating a cantina, he is attacked by mercenaries, hired to kill him.  Although they were unsuccessful, Vader learns where their orders came from: the highest order of the Imperial Capital.  It appears that Vader’s enemies are everywhere.

Vader’s personal ship is speeding through hyperspace back home.  Vader reassembles his lightsaber while his droid recites details of the kill contract.  Vader orders the droid to provide him with a list of names of individuals who would have appropriate access.  As Vader ignites his new lightsaber to ensure it works, they drop out of hyperspace above Coruscant.  But the Ninth Sister announces there may be a problem:  they can’t transmit their authorization code to the orbital defense platform.  They are being jammed.

And because of that, the defenses meant to protect Coruscant fire upon Vader’s ship.  Vader immediately takes over piloting, deftly avoiding the blasts and missiles.  They don’t escape entirely unscathed, with their ship crashing on Coruscant, but thanks to Vader, they both survive.  But surviving isn’t enough.  Vader is determined to find out who is behind these attacks.

He goes to see his Master in the former Jedi temple.  He blatantly asks Palpatine if the Emperor is behind these attacks.  The Emperor first takes Vader’s lightsaber and examines it.  He then explains that he did not order the hit on Vader, but ultimately, this is what power will require.  Vader will constantly have enemies, seeking to undermine him. 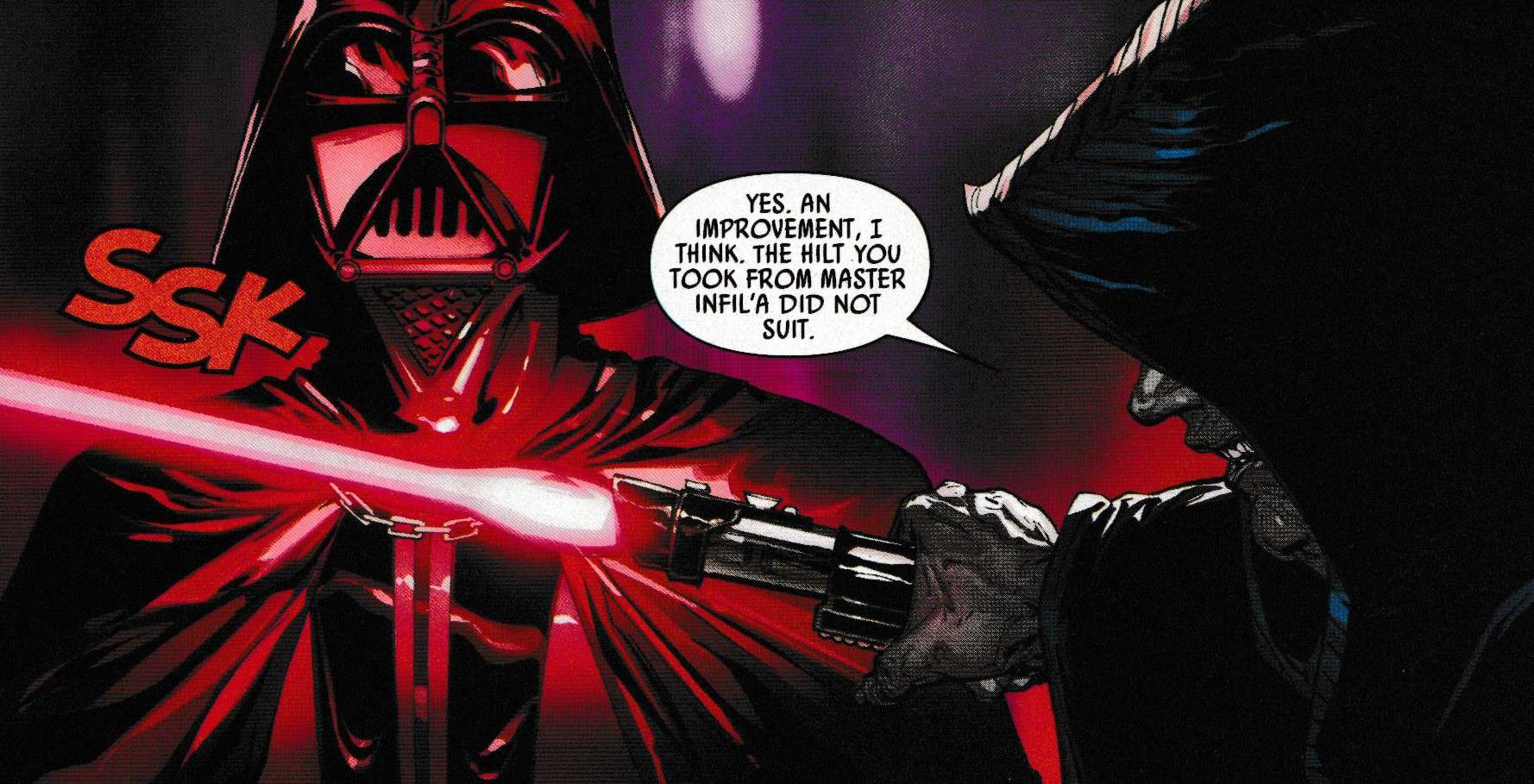 Elsewhere on Coruscant, in the Room of Masks, two individuals discuss how both of their attempts to kill Vader have failed.  They have no idea who Vader is, but the way the Emperor has elevated him has them both suspicious.  There is something between both the Emperor and Vader that they don’t understand.  They are not yet deterred, though.  They plan to try again and again until they succeed.

In the Emperor’s throne room, Vader knows what needs to be done.  The officers don’t realize that he is in charge.  They don’t respect his authority.  And so he makes a request of the Emperor.  Palpatine grants his request…as long as Vader doesn’t choose Tarkin.

A short time later, the Emperor introduces Vader to the Imperial officers.  He announces that Vader is his second in command and they must all obey him just as they would the Emperor.  With that, Vader steps forward and calls out five random officers.  The five-step forward.  Vader announces that he knows it is someone within the officers’ corps who has been plotting his assassination.  He may not know who for sure, but for their crimes, he has picked five at random.  And with a wave of his hand, the five random officers crumple to the ground, dead.

The Vision once said, “Our very strength incites challenge”.  And this is never truer than when dealing with Darth Vader.  Soule gives us a glimpse into the political infighting (taken to the extreme) in the Emperor’s new order.  Vader is powerful.  But that power is seen as given to him, not earned, and so he is challenged.  Maybe by the Emperor, maybe not (I still wouldn’t be surprised if he ended up manipulating things because that’s how he rolls).

And so this issue is all about Vader finally establishing his dominance over the military.  He is more than just the Emperor’s subordinate.  In all of the Empire, he is the #2 individual, and here he demonstrates it.  The assassination attempts may continue or they may stop, but at least now, the Imperial officers understand where they stand.  They live or die at Vader’s whim and that’s got to be a very scary place to be.  But I can only imagine how horrible it’d be to go to work each day, wondering if you’ll be chosen at random to die.  To worry that one little slip up could kill you.

And that’s what makes this issue so enjoyable.  Sure, there’s a little action here and there, such as when Vader gives us some fancy flying above Coruscant.  But it’s the ending, where Vader clenches his fist and five officers die…it’s the ending that makes the issue.  And this was a fantastic ending.

Final Thoughts:  It may not be as wild as the other issues, but it’s definitely more thought-provoking, giving us some great insight into how Vader establishes his dominance.  It’s a well-told story and any Darth Vader fan is sure to love this!  Heck, any Star Wars fan!