Jocasta wants the Inquisitor out of her library.  The Inquisitor wants her dead.  Add Darth Vader to the mix and you get an explosive situation that all may not walk away from. 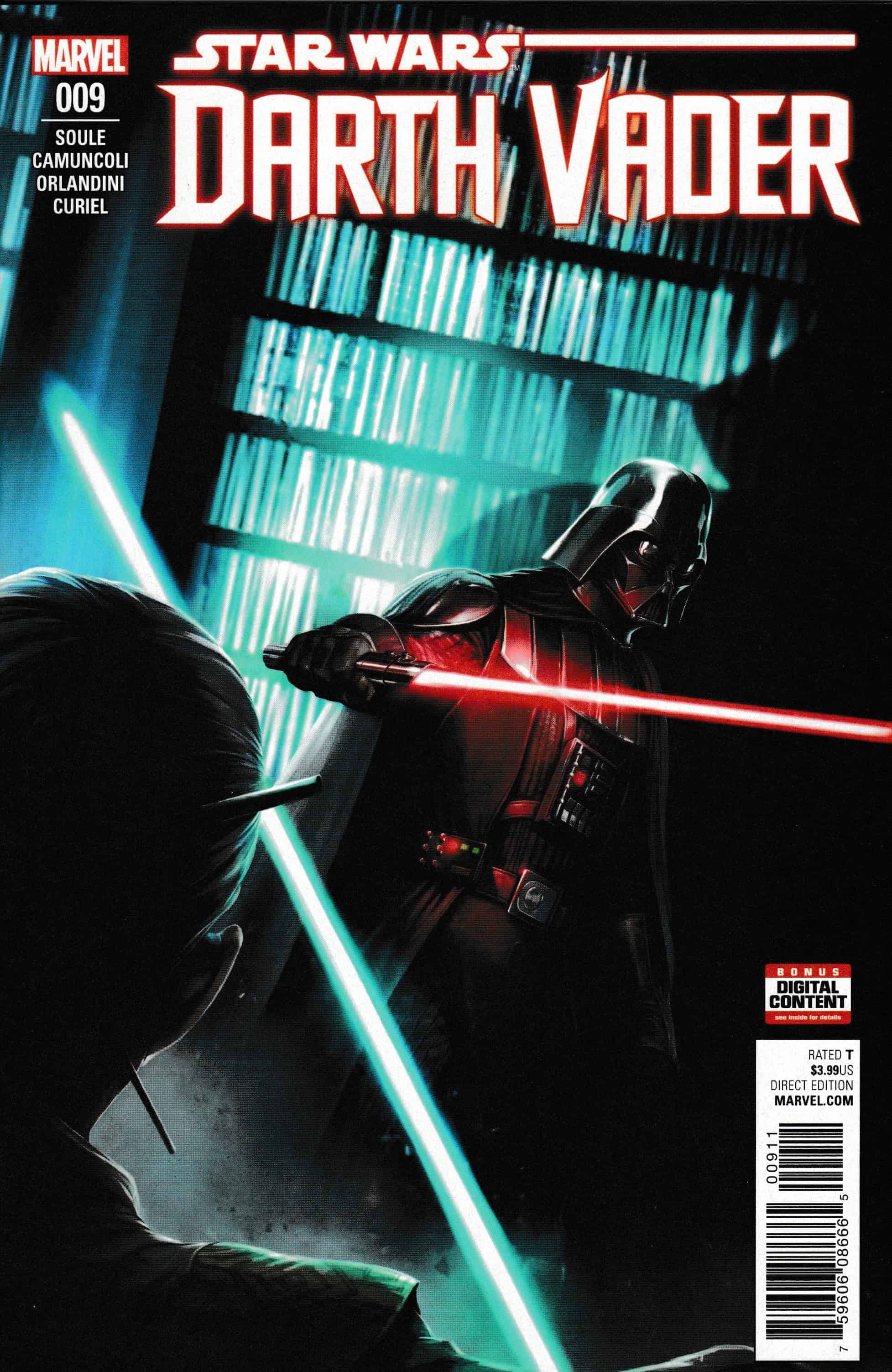 Darth Vader has been given the job of training the Inquisitors, a group of force sensitive dark side users.  But that training is on hold as Emperor Palpatine has given him the job of hunting down Jocasta Nu, the Jedi librarian.  However, he doesn’t have to travel far.  Jocasta has returned to the Jedi Temple on Coruscant to purge the library’s databases.

A platoon of clone soldiers has surrounded the Jedi Temple as Vader strolls in, after a reported Jedi.  Inside, Jocasta has confronted one of the Inquisitors in the library.  In fact, it’s not just any inquisitor.  It’s the Grand Inquisitor.  The two fight, parrying each blow, throwing each other with the Force, until finally, the Inquisitor stands triumphant.  However, as he swings his final blow downward, Darth Vader is there, blocking his strike.  The two argue, but this gives Jocasta enough time to hurl shelves of datapads at the two, burying them both.  The Grand Inquisitor is left unconscious and Vader is stunned enough for Jocasta to flee into the library. 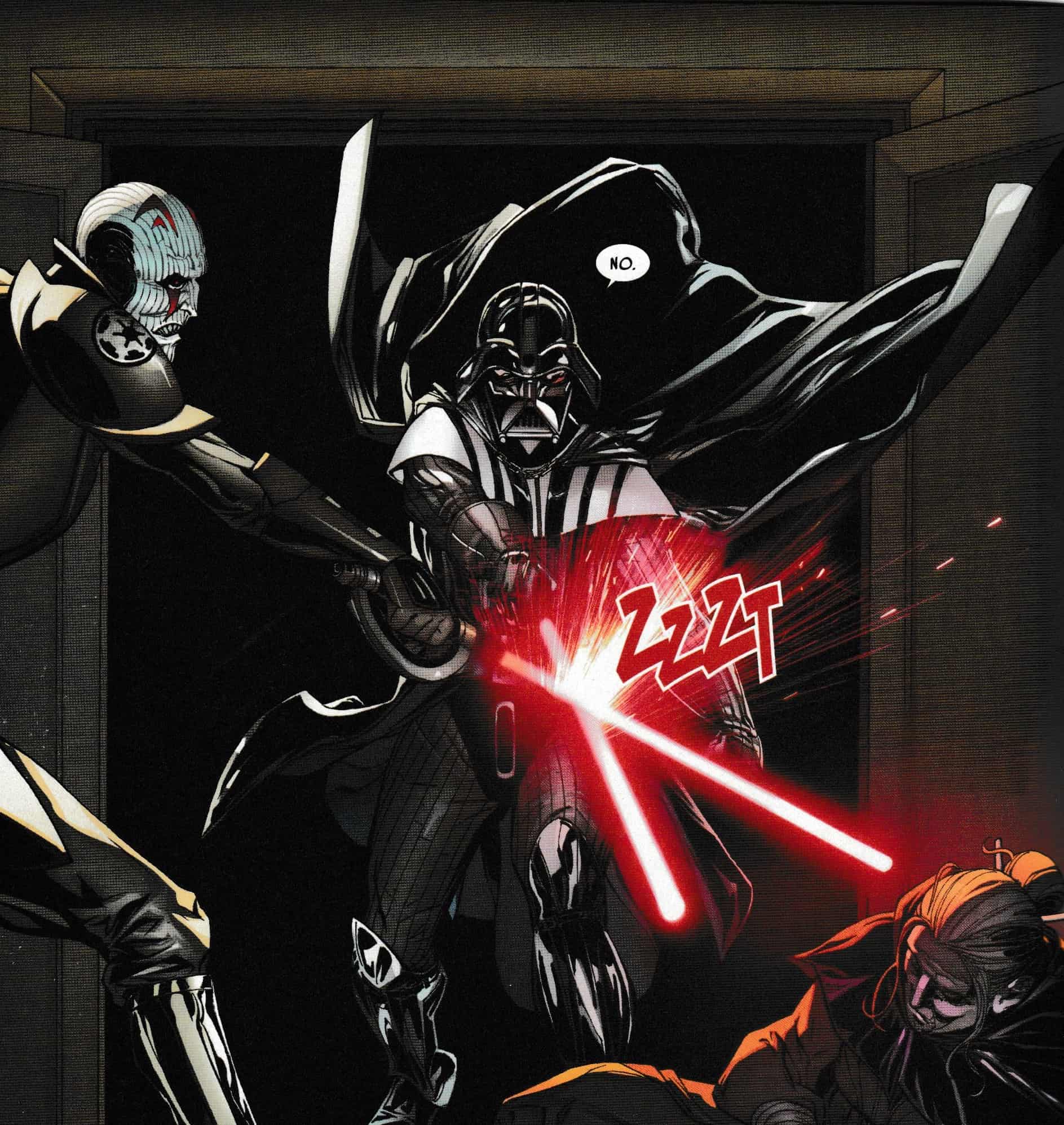 However, escape is not her plan.  Even as Jocasta attempts to stall him with her words, she hides, entering codes that will purge the library of all its information.  Once that is done, she retreats further, but Vader continues after her, unrelenting.  He encounters a guardian robot who recognizes Vader as the former Anakin Skywalker…so Vader beats the robot into scrap.

But even once this happens, he is blasted by a rather large beam of energy that even his saber cannot deflect.  There stands Jocasta with a rather impressive looking rifle. 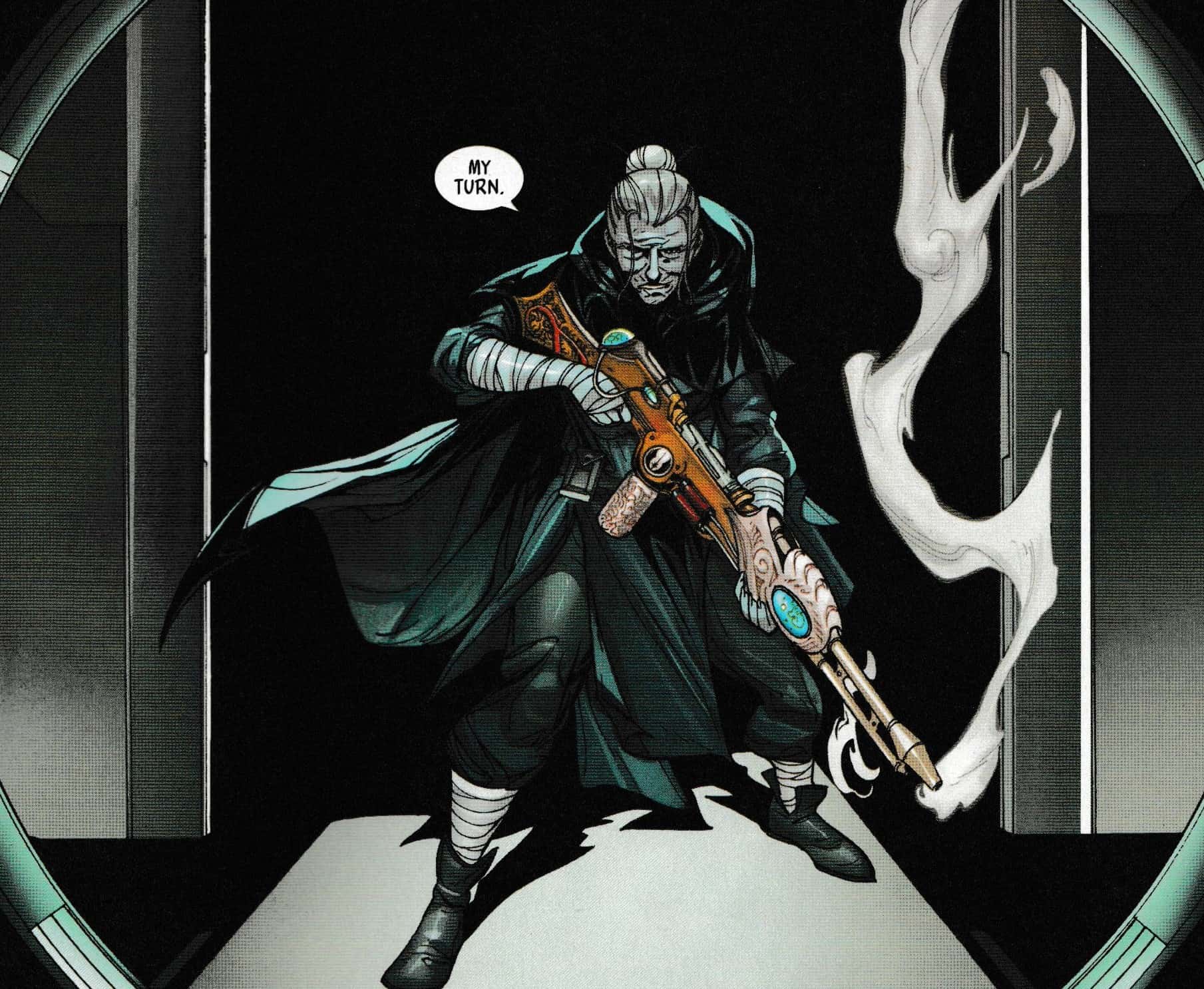 Darth Vader is the first Star Wars comic I’ve read since….well since Dark Horse had the license.  And I must say…If this is how all the Star Wars comics are, I have really been missing out.

Ultimately, this isn’t some story where the action takes center stage.  It’s really about conflicting ideologies, which is what Star Wars does best.  I mean sure, we all love the lightsaber fights and the X-Wing versus TIE fighters and the Death Star super laser, but Soule instead reminds us that these are people who used to be friends.  Or at least colleagues.  We are dealing with traitors, and ironically each side views the other as the traitor.  Jocasta sees the Inquisitor as someone who betrayed the Jedi Order.  The Inquisitor sees Jocasta as the Jedi Order who betrayed him.  Darth Vader requires blind obedience from the Inquisitor who would instead prefer to just slaughter Jocasta.  And the Inquisitor sees Vader’s interference as a lack of trust.

I really enjoyed Jocasta’s reaction to the idea that the Inquisitor used to be a member of the Jedi Order.  It was as though she couldn’t believe that these dark side users used to be her friends…her allies.  Once again, we see the betrayal.  It’s almost personal for her.  Once again, we’re reminded of the hubris of the Jedi that led to their downfall.

The art is decent enough.  Nothing to get terribly excited about, although Camuncoli does an amazing job with the Inquisitor, making him terrifying.  But the colors by Curiel really stand out, which to me, is more important than the art itself.  The glow of the lightsabers, the contrast between the red and blue (I thought it was great how even the rifle blast at the end was a striking blue against Vader’s red saber), it was all fantastic.

It’s funny when you think about it.  When we see Jocasta Nu in Revenge of the Sith, she seems to be just a very old woman, a typical librarian.  But here, Soule throws us a curveball and we get to see that Jocasta really can be a warrior.  She may not be the flashiest one out there, but she’s not your typical librarian.  Or maybe she is.  Maybe we should all look at librarians a little differently.

Final Thoughts:  I will never look at librarians differently.  Soule gives us a fantastic story of betrayal and shows that even the old librarians know how to kick ass.  If you’re not reading Darth Vader but are a fan of Star Wars, this is a series you should definitely pick up.  Soule has demonstrated that he knows these characters and he knows what makes Star Wars so enduring.