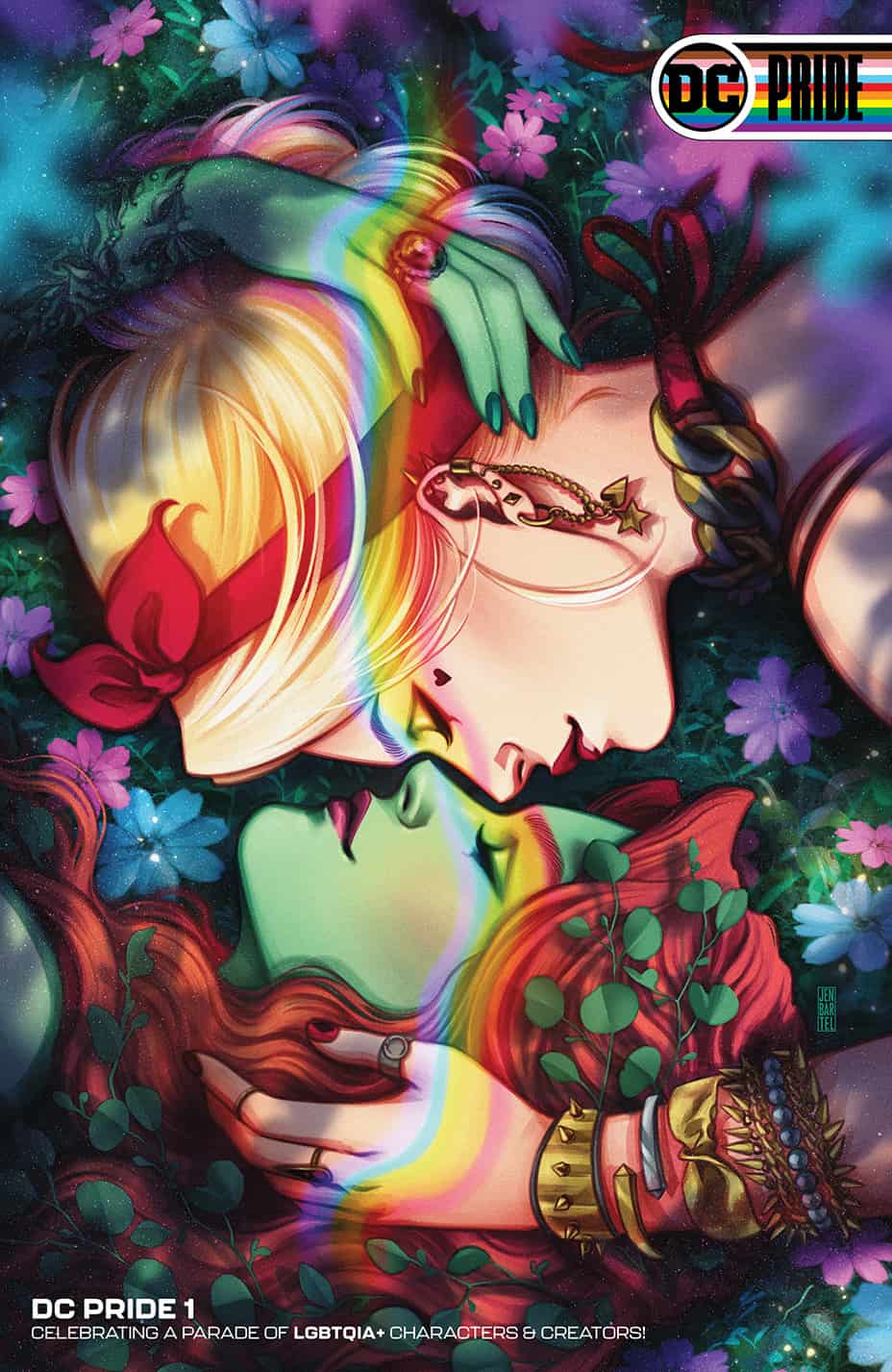 As Harley and Ivy face… whatever that giant plant monster is?!?!? they also need to talk about their.. Benevolent bond? Tactile agreement? R…. Royal Interlude?

I can’t stress how important this story and the framing it does around sapphic relationships, and the particular relationship between these two messy messes, is. But more on that later. Right from the beginning, ‘Another Word For A Truck To Move Your Furniture’ delivers a colorful all around fun execution that giftes us a bunch of fighting slimy stuff and being messy and hilariously ironic (as it’s only fit for a Halivy story), as the story takes the reader to the center of a conversation around relationship dynamics, boundaries and definition.

What Tamaki lays here in dialogue is precious, naturally evolving, extremely in character for what both of these characters have survived and gay to the heart. Then, Reeder’s art takes the extra mile reminding us in every panel how lively, dramatic and sentimental these characters are, with Louise’s colors seemingly popping out the page, filling our eyes with their emotions, and rounded up by backgrounds filled with live and adorableness. And Maher’s  FX effects that go beyond the edge of the sheet, as well as coloring and styling inside the bubbles, contribute as much to this emotion of having the story shout to you how much it wants to talk about Harley and Ivy, and how much these two fit within each other, and how both absorbing and healing is to witness this beautiful comic. 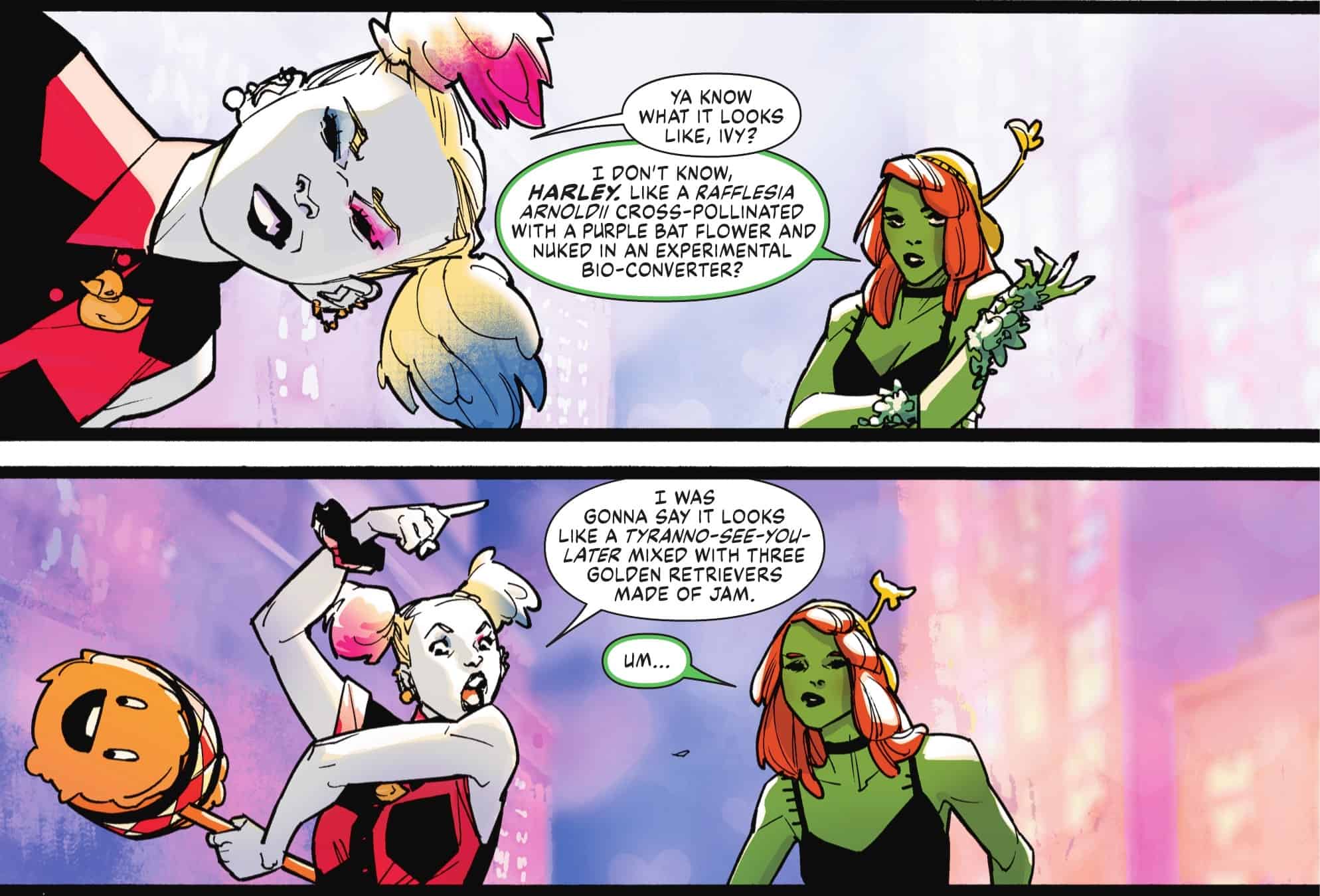 Here’s to the ‘later’! As someone who, as Harley, has survived abusive relationships that have affected my capacity to trust emotional bonds, and, as Ivy, am very insecure about the people I like and how ‘real’ our relationship is (specially within this specific dynamic of liking another girl in a society that doesn’t teach you how to navigate that and that considers romantic and/or sexual relationships between women as ‘less of a relationship’ than the ones that involve men)… this story was more than relatable all around and brought legit tears to my face. As it is acknowledging those feelings and the ways in which Harley and Ivy can navigate a relationship that has weight, agency and a power in self-defiance and self-definition outside of heteronormative rules. I have to say I do have a very small “but” to it, which mostly revolves around the story only implying the relationship between Harley and Ivy as a non monogamous one instead of explicitly stating so, but, to be honest, there’s only so much stuff you can do in literally eight pages… and they’re just starting to talk about it! (like, Duna, give them a rest!). Their romance has always been framed in non monogamous terms (even if within the Conner and Palmiotti run it was not explicitly romantic and committed as it is here), and this comic does respect that in the way Harley doesn’t want their relationship to oppress them, so certainly the reader can make the extra leaps necessary (specially if they’re familiar with the characters), but I just have a little “I wish” about specific words appearing in the page. As I type this, I realized I kind of just want a sequel to get more in-depth about these talks be honest!

All around, and within my experience of a girl in a sapphic non-monogamous long relationship (5 years soon!), this is one of the first times I have seen myself in that way in a comic. And with two of my favorite characters, in such a beautiful package that I, honestly, swoon at how they love each other and how this comic takes the time and care to explain why they decide to love each other like this. And that kiss! That kiss is the most adorable ever!

Adorable, emotionful and immensely important short story that puts Harlivy in its place as the cutest girlfriends of DC, and that goes to the necessary lengths to make them justice. Overall, really happy about this, and, if you're a fan of them, there's no way you won't enjoy it!