DC vs. Vampires #10: Blinded by the Light 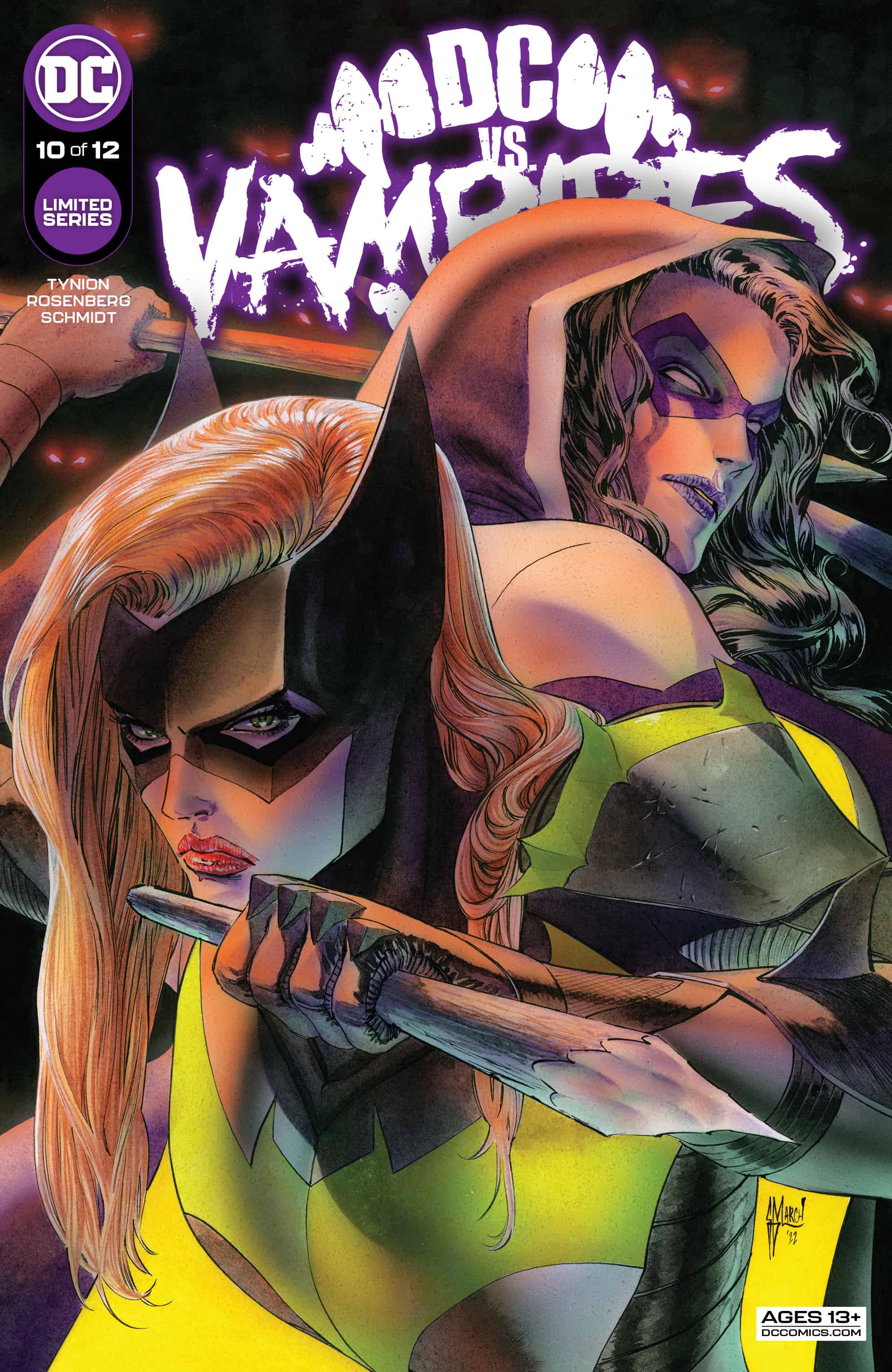 The war for Earth takes a decisive turn as the heroes prepare to strike back! Can Supergirl and her team in Australia escape to space? Will the Birds of Prey’s infiltration of Gotham City go unnoticed by the Vampire King? Can Green Arrow save the human cattle from the Blood Farm? The shocking answers await!

Motion and action can be some of the most difficult elements to capture in any art form, but especially in sequential art. The medium is inherently static since its composition relies on static images to build pages and tell stories. An artist may use expressive linework on figures, illustrate lines to showcase action, or use effects to trick the mind to understand a subject is moving. It takes a competent artist to imbue every line and form with a sense of dynamism that not only keeps the pages moving but captures the inherently dynamic aesthetic ideal of the superhero genre. The art in a book like DC vs. Vampires is one of those styles, working from page one to capture a sense of fluid energy that ensures the book never stops moving.

DC vs. Vampires #10 – written by James Tynion IV and Matthew Rosenberg, with art and colors by Otto Schmidt, and letters by Tom Napolitano – continues the final assault of the remaining humans against multiple vampire strongholds in Gotham, Smallville, and Australia. Batgirl, Black Canary, Harley Quinn, and Damian Wayne are set to kill vampire king Dick Grayson, Green Arrow is working to free more humans from the blood farms of Kansas, and Supergirl, Steel, and Jayna are working to bring sunlight back to Earth. The issue continues a split focus between the plotlines, as each group faces challenges like vampiric Black Adam, Hawkman, and the wastelands of Tamala. Batgirl’s plan is revealed as the remaining batfamily has been planning their revolution in Gotham, using UV batsignals to bring the fight to the enemy’s gates. Arrow lets himself be captured, revealing he’s snuck into the Swamp Thing, the two ready to inspire the humans to revolt against their captors. The trio in Australia also finds their goal, the downed Watchtower satellite.

The script for this issue is peppered with great bits as the book shifts gears into its final issues. Where else can you get a literal pissing contest between Green Arrow and Grifter, solid jokes at Punchline’s expense, and weaponized batsignals that cause Batman rogues to burst into flames? Tynion and Rosenberg have spent nine issues establishing this new world and the various interpretations of DC characters, and that work pays off in spades with this issue. Even as the book is juggling three distinct, separate plans with mismatched casts, the narrative core is lean and tight, telling a strong pulp story. It leans into the genre trappings, both the vampire and superhero aspects, to tell a story that has big crisis energy without being an actual crisis.

If Tynion and Rosenberg pulled a Dark Crisis and revealed the actual name of the series to be DC vs. Vampires on Infinite Earths, not only would be believable, but it’d be pretty exciting based on the book’s track record. The script does a great job of never losing its voice across the cavalcade of characters it uses, anchoring the audience thanks to Batgirl, Green Arrow, and Jayna. The book also makes clear that the writing duo needs to tackle a Green Arrow/Grifter-led revival of the Hard Travelin’ Heroes. The banter between the characters is a great encapsulation of what makes the issue’s writing a standout. It’s an interesting trio that ensures an outside perspective is shared while looking into the large DC Universe and allows for more humor to naturally occur. The book’s use of character balances well with the simple but expansive plot, working in harmony with Schmidt’s art to focus on what matters in every panel and scene. This is a book that ensures that no moment or beat is wasted while maintaining a flowing pace that doesn’t feel rushed.

Schmidt’s art is a perfect fit for the pace and tone of this series, and this issue is an excellent showcase of that fact. The style that’s all kinetic action, knee-wobble-inducing smirks, and a myriad of costume choices match the snappy dialogue and joy of seeing second-string characters take the lead. Schmidt’s scratchy linework gives the book a sense that everything is always in motion, imbuing a sense of potential energy that snaps at the right key moments, bursting into dynamic action. Sometimes it might be a streak of fire that ignites Black Adam, while in other moments, it’s a naked Harley Quinn sneaking around the sewers after knocking out her guards.

Every panel is teeming with energy and sells the pulpy nature of this series. It’s that same energy that speaks to this book’s feeling of a crisis. While the current DC crisis feels lacking, in part due to a lack of voice, it also has action sequences and a scale that is multiverse spanning geographically but emotionally lacking. In this issue/series, the inverse is true. The stakes are greatest for the central characters of this world, not the larger universe/multiverse. The art is great for both series, but it’s what Schmidt imbues into his art that sells the scope and stakes of this series. What also helps DC vs. Vampires is Schmidt’s coloring, which gives it the tonal palette of a modern crisis.

The coloring choices for the series at large have been killer, but Schmidt’s palette does a great job of enhancing the storytelling with this issue. The standout points are the artist’s use of lighting in Gotham and Australia. The UV-infused light of the batsignal brings a dimension to the page that sparks conflict and resolution almost immediately, clashing with an even more gothic-inspired Gotham to illustrate the narrative crux of heroes fighting vampires. The blue/whites are splashes of color breaking the bloody reds and deep blacks that cloak Gotham and signal a new day for the city that’s perpetually on the edge of an abyss, and Schmidt makes sure the reader is keenly aware of it.

Pairing that lighting with the harsh, endless faded reds and oranges of the bushland is a great showcase of the visuals that Schmidt has brought to life for this new world. The coloring takes over the expansive terrain, and in panels, it’s difficult to make out anything besides the characters in the frame. That same coloring occurs in the Kansas prisons, and it creates a uniformity for the world affected by the vampires, equating the American heartland to the bushland of Australia. Both are extensive territories ready to swallow human survivors up while serving as oppressive reminders on the page that nowhere is free or unaffected by the machinations of Nightwing or his hordes of vampires.

DC vs. Vampires #10 is an excellent escalation of the plots established in the last issue, translating the visual style of Schmidt into a moving pace that barrels towards the inevitable conclusion of heroes vs vampires. The scale and color palette of this issue channel the aesthetic of a DC crisis, and gives this series a fun dramatic core, as though it's a sense of pulpy counterprogramming to the mainline event taking place on the other end of DC’s publishing landscape. With a strong script full of fully realized characters, dynamic art, and a powerful color palette, DC vs. Vampires holds up as one of the best books that DC is putting out right now.

DC vs. Vampires #10: Blinded by the Light