DC vs. Vampires #11: Racing in the Streets of Gotham 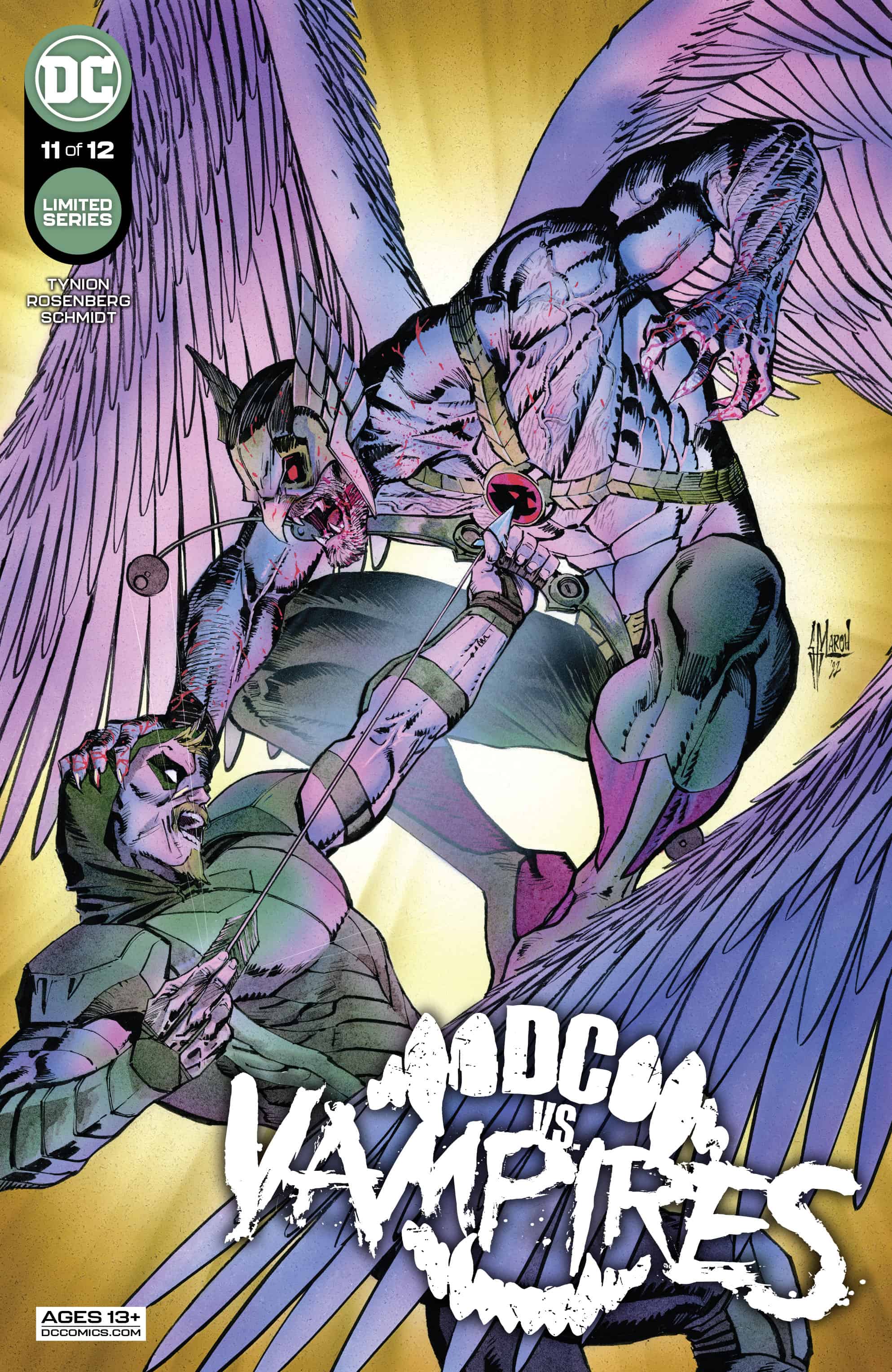 Humanity’s final battles against King Nightwing and his vampire armies have seemingly failed on all three fronts. Who lives? Who dies? As all hope is extinguished, will the surviving heroes be able to stop the extinction of the human race?

The thrill of an Elseworlds title is the unrestrained creativity that can arise thanks to the separation from continuity. Writers don’t have to be beholden to what status quo is going on in the Batoffices, artists, and colorists can pick and choose costuming and aesthetics that resonate with the story rather than what’s established. It’s a blank slate that can spring new and innovative elements that exceed any expectations from fans, while still playing off those same expectations and streamlining them into something original. A book like DC vs. Vampires is a title that makes the case for these types of stories from the big 2, playing firmly with the DC Universe to tell a story unlike anything else on the shelves.

DC vs. Vampires #11 – written by James Tynion IV & Matthew Rosenberg, art and colors by Otto Schmidt with Francesco Mortarino & Pierluigi Casolino, and lettered by Tom Napolitano – reaches its penultimate issue, thrusting the audience into 22 pages of almost non-stop action. Batgirl’s contingency of Black Canary, Robin, Frankenstein, Harley Quinn, and the extended batfamily hidden in vampire-controlled Gotham battle endless hordes of the creatures while Supergirl, Steel, and Jayna attempt to break onto a rocket heading to space, filled with various DC aliens. In the third plot, Green Arrow and Swamp Thing cause chaos thanks to Grifter’s help in the Smallville blood farm.

It’s a rock-solid, simple plot that goes full speed ahead, never taking its foot off the gas. Tynion and Rosenberg play off the momentum set in the previous issues, paying off the establishment of the world and its players to an effective degree that makes this issue come off as a breeze. The three plots are unique and deliver vary different aspects of the DC Universe’s action sequences, from the hyperkinetic, vicious fighting from the Bats of Gotham, while the Supergirl/Steel conflict with a vampiric Martian Manhunter is short but brutal, utilizing a Lobo cameo to indulge in a swift bit of carnage. The Green Arrow plot gets the least page of real estate but offers a tense arming scene as Swamp Thing prepares for an all-out assault on the facility.

Beyond the action, Tynion and Rosenberg’s scripting continues to capture the pure ethos of the DC Universe, pulling from continuity to deliver fun cameos and larger implications for the world. This issue makes clear that this book is more than just fun pulp, as it examines the vampire’s response to earth’s sprawling cosmic population, having decided to send any aliens unable to be turned back to their homes to avoid galactic politics. It’s a small moment that allows for the issue’s cliffhanger, but in the larger context of the series, shows the effort that has gone into working out the mechanics of a world run by vampires. It also allows the duo to drop in even more characters, like Martian Manhunter and Lobo, and shows that the writers can capture their voices just as well as the ragtag superheroes and urban vigilantes.

Schmidt’s art is once again the biggest draw of this comic, elevating everything that works with the scripting to infuse a core momentum and character to this Elseworld. The action is front and center in the issue, with Schmidt delivering some career-defining art in the sequences set in Gotham, first with ground combat as the team battles hordes of vampires. Even in the tense situation, humor makes its way through as Damian fights a vampiric Condiment King. Schmidt renders the joke character in the same serious way that Black Canary or Constantine appears on the page. The fight between Damian and the villain is a quick two pages but serves an important function in establishing how the vampires see Robin, and affirming Damian is still the character readers know.

Couching the furious fighting of Batgirl and Black Canary between more humorous moves by Damian, fighting the Condiment King, and then spearing a vamp through Frankenstein, Schmidt ensures the action is more than a hollow spectacle. It’s gorgeous to look at, sure, but it also reminds us that these characters are more than hollow avatars enacting carnage. After the harrowing fight, the creative team ups the ante by throwing the team onto roaring motorbikes equipped with UV batsignals.

The chase/fight sequence is stunning, giving Black Canary and Napolitano’s lettering a chance to shine. The lettering for the SFX is paired with a striking canary yellow that not only breaks up the page but is rendered in a font that plays on Dinah’s weariness. It’s scratchy and ragged that gels with Schmidt’s style of linework, and heightens the emotion of the page. It also combines with the sound wave effect to create a cohesive cause and effect between the two panels that force the eye to the subject. The panel work in the sequence is tight and concise, ensuring that the figures are never lost as Canary launches an overwhelming canary cry. Schmidt chooses to give the bulk of the panel focus to Dinah herself, and then showcases the collateral of the move in a smaller panel, putting on display the artist’s strong sense of what makes the action work.

Schmidt knows that the action should be an expression of the story, conveying what can’t be put into words, and Black Canary’s sonic scream is the perfect manifestation of that. The line work conveys a weary hero that’s still willing to fight, emptying the tank to buy a few seconds for a sunrise that she may not see, at least as a human. When Dinah returns to the sidecar after that screech, there’s a resignation that she’ll have to try and use her ability again, but the strain is clear on her face. It’s a brilliant detail that just sells what a powerhouse Schmidt is for action as an expression of character.

Schmidt’s colors, with assistance from Mortarino and Casolino, enhance the clarity of the action, especially in the motorcycle chase. The sharp contrast of the Canary yellow of the scream against the crimson red background of the world ensures that the action pops, and is carried over in the various costumes of the vigilantes. The same contrast happens in the clash of greens with Swamp Thing and Green Arrow, drawing the eye and ensuring that the harsh backgrounds are always present but never swallowed the panel’s objects. The coloring also helps to build and establish the panel work, as Schmidt generally avoids solid panel shapes and lines, favoring colored, faded lines without gutters. The choice of layouts paired with the palette of reds, blacks, and yellows for the panel outlines gives a flowing feel that feeds into the non-stop momentum of the series.

DC vs. Vampires #11 begins its ending with a bang and multiple jaw-dropping action sequences that showcase the full range of the creative teams’ talents. Tynion and Rosenberg’s script starts to bring various plot elements and new elements that feel like organic additions, to Schmidt’s art that capture the electricity of kinetic action, and the coloring and lettering that reinforce the art and its clarity, this issue does not miss. It’s a tragedy that this series is coming to an end with the next issue, but one can only hope that it will share success like similar series DCeased, and see the creative reunite every few years to deliver more art and stories in the vein of DC vs. Vampires.

DC vs. Vampires #11: Racing in the Streets of Gotham