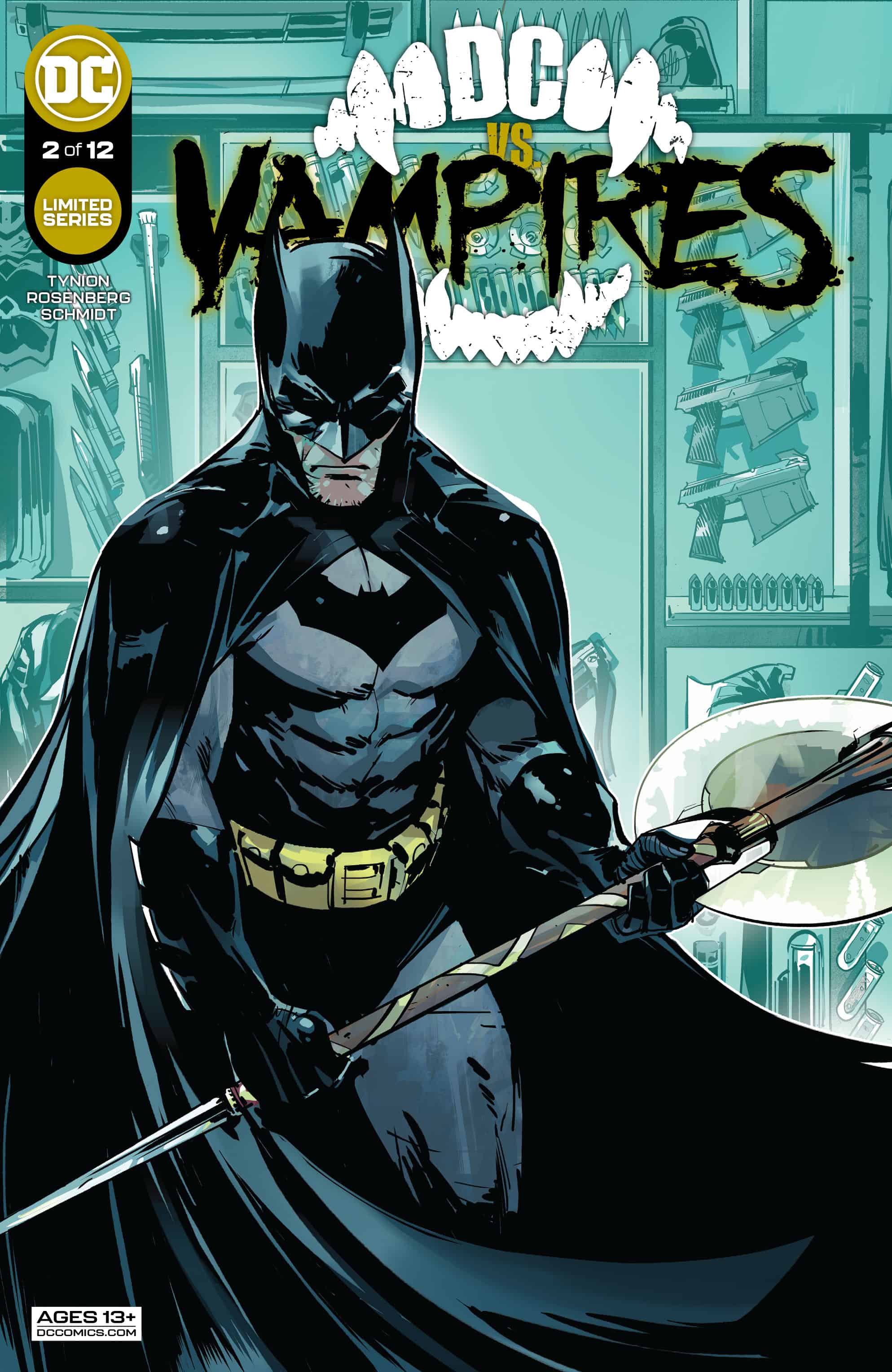 The war for the very survival of the human race has begun! A mysterious new vampire lord has already put a plan in motion to conquer the Earth, and the first step is-destroy the Justice League! But the World’s Greatest Detective might be Earth’s last hope, and it’s time for the Bat-Family to hunt!

Team books always seem the hardest for an artist because it inherently requires an artist to have to try and adapt multiple styles or conventions into a single issue. A book like Justice League, which depending on the roster, usually requires a healthy blend of sci-fi aliens, bombastic superpowers like magic rings and bursts of speed, and rough and tumble, gritter hand to hand combat. It’s a lot to expect from any artist, but especially on the chaotic production schedule of a big two book. It’s all the more impressive when an artist takes that challenge and knocks it out of the park, taking their style and incorporating it into that wide range of genres across the shared universe. It’s honestly no surprise that DC vs. Vampires’ sophomore issue, written by James Tynion IV and Matthew Rosenberg, with art and color by Otto Schmidt, is one of the issues that can tackle that spectrum of style and come out on top.

The script is an expertly paced and constructed story, anchoring the plot in the revelations of the coming Vampire war from Batman’s analytic p.o.v, while also continuing the mystery of Green Arrow’s role and setting up a sympathetic beat for the vampiric Hal Jordan. Tynion and Rosenberg deliver excellent moments between both the extended Bat-Family, and Hal Jordan and Barry Allen. The way the writers handle a potential story ending Deus Ex Machina in the form of Barry Allen’s Flash is excellent, misdirecting an almost invisible story mechanic with a heart-wrenching scene between one of the finest duos in the DC Universe. It’s a standout and natural scene that is both enthralling to watch and a masterful twist.

Otto Schmidt continues to be a tour-de-force in this book, making it look natural to switch between crazy powers and high flying superheroes, like a wonderful depiction of the Flash’s powers and the grittier, street-level action of fighting that a hero like Green Arrow incorporates. Schmidt’s style is like an artistic chameleon, blending into whatever genre it needs to based on the plot. With Schmidt handling both the art and colors, it creates a perfect sense of cohesion that allows the book to make those leaps and bounds across the various genres and aesthetics.

The art is also stylized enough to make the book’s long stretch of exposition from Batman a page-turner. It helps that the writing duo has a masterful control over the voices of the massive group, and based on Schmidt’s Twitter presence, he may have an influence on the characters as well. Schmidt’s equally a master of action and facial expressions, with every smirk, frown, and tear feeling like a perfect gut punch while reading. His signature style shifts from those quieter moments balancing character dynamics to excellently crafted action sequences, never allowing his panels or pages to feel cluttered or busy. They’re lean, kinetic, and page-turning in what feels like a breezy and effortlessly seeming way. It’s a technique that makes a book fly by but justifies a time to go back and read it again.

With DC vs. Vampires #2, it’s clear that Schmidt, if he wants to, deserves to be working on a Justice League book or a universe-spanning crossover. This is proven by his ability for scope and genre, and his deep understanding of how to portray a massive spectrum of character designs, powers, and action. The issue is a thrilling showcase of Schmidt’s talents as an artist and is bolstered by tight scripting from Tynion and Rosenberg. Even though the book has only reached its second issue, it’s a testament to the overall craft going into the series that makes it a contender for an instant classic.