DC vs. Vampires #4: Do You Believe in Magic? 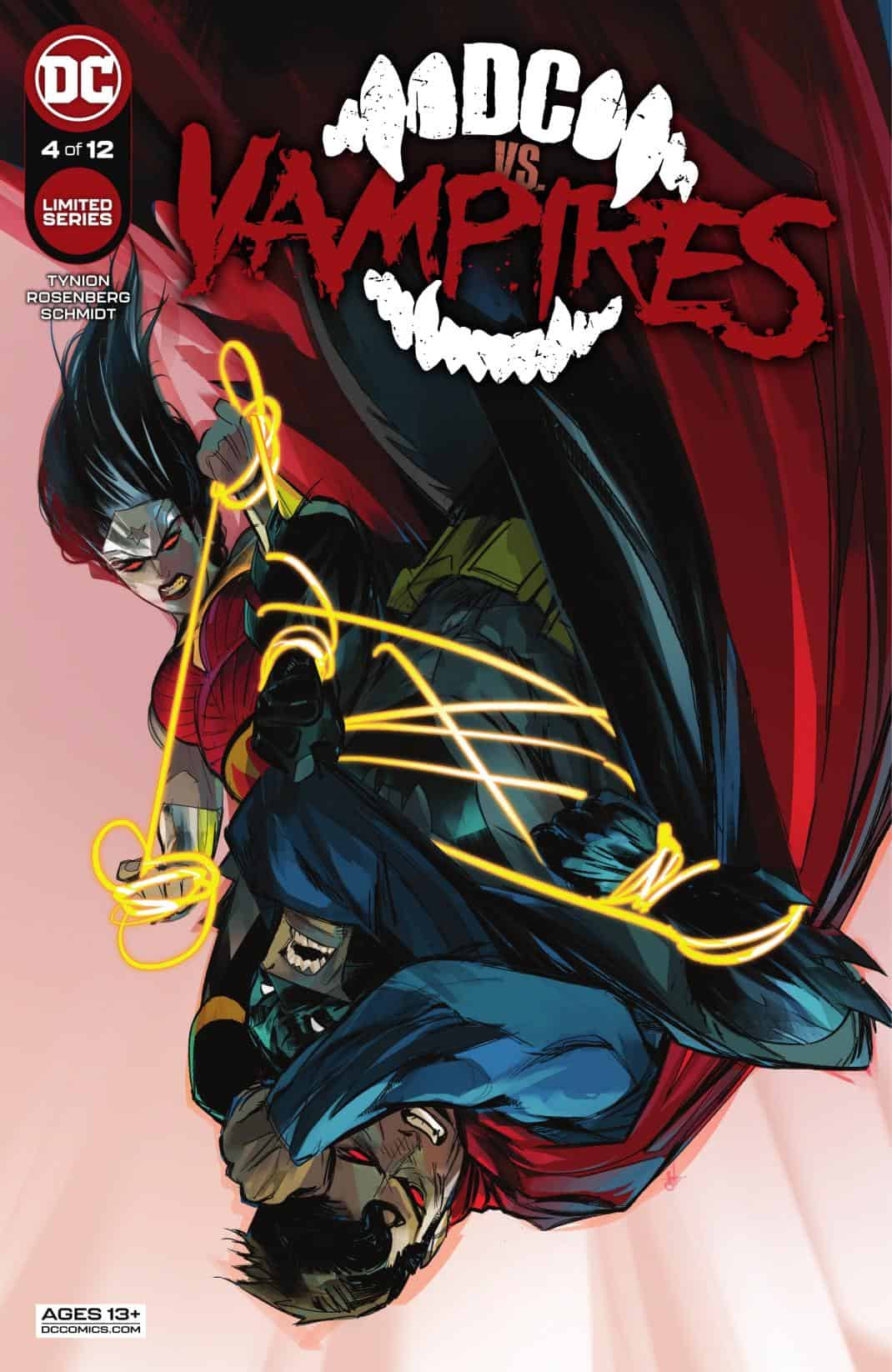 Batman has confirmed who in the Justice League has been turned into a vampire…but can he make his move before the Justice League is turned against him? It’s hero versus hero in this blood-drenched chapter…with clues to who the new Vampire King might be!

It’s said that variety is the spice of life, and if that’s the case, then Otto Schmidt’s art is not just the spice, but the entire rack. DC vs. Vampires feels like it would promise something specific, superheroes battling vampires, but instead delivers something new every issue. Issue #4 continues to provide something new and fresh, with a script from James Tynion IV and Matthew Rosenberg, with art and colors from Schmidt and letters by Tom Napolitano. The issue feels like the alchemy of Tynion’s established time working with characters like Zatanna and Constantine and Schmidt’s ever-evolving art.

The book is equal parts fun and frustrating, with art and action that outpaces the story. In an age of DC experimenting with ways to publish books, DC vs. Vampires feels like a lingering maxi-series from an older era. The book would benefit from either a shorter run like the Supergirl eight issue mini or a weekly Injustice and the DCeased spinoffs. The writing duo has clear and distinct voices for each character in the rotating cast, and the scripting shines in the dynamic between Zatanna and Constantine, Nightwing and Batgirl, and Batman and Green Arrow. Each pairing feels charged with a different dynamic, and feels it would lend itself to the Injustice style of mini-arc that focus on specific sections of the universe like vignettes building to the bigger plot.

Rosenberg and Tynion’s pacing for the series feel off, mostly due to the disparate plotlines that only feel tangentially related. It’s entirely possible that by issue seven or eight, everything will come together, but it doesn’t bode well when this issue feels like it should be the halfway point and not a third of the way in. The series will hopefully read better in trade, as the book feels like it was written specifically for the format.

Schmidt’s art continues to remain excellent and always feels refreshing while playing with a new element, in this case, magical spells from Constantine. Every new scene in the book works as an unofficial pitch for Schmidt to get to draw a new book, and this issue indicates he should get the first pick for the next Justice League Dark run. His method of rendering mystical energy is well – forgive the pun – magical. It’s the combination of impressive line work and vibrant colors that add a whole new dimension to the current art of the book. It’s honestly fascinating to watch Schmidt crush any and every genre and element of the shared universe put in front of him.

Along with Schmidt’s stunning magical interlude, the issue’s most captivating scene is a confrontation between Green Arrow and Batman, which the creative team has been set up for the first three issues. The progression of the scene, which is cross-cut with a little interlude of Nightwing and Batgirl detecting and flirting, is Green Arrow launching a surprise attack against Batman in the Batcave. The fight is broken into two parts, which are equally gripping, first with Batman shutting off the lights and Arrow trying to shoot him down in the dark.

The pages are a masterclass in coloring being used as a light in the scene. Schmidt uses computer monitors and the tips of arrows to illuminate the cave and adds to the tension of the cat and mouse game. The two then come into conflict and begin a rough and rugged fight that rolls across the best double-page splash of the year so far. It’s a variety of panel shapes and sizes, with arrows snapping, batarangs flying, and bloodied heroes. The fight ends in a standstill, with both fighters realizing neither is a bloodsucker. This fight feels hyperkinetic, with the style of action Schmidt mastered during his time on Green Arrow and Hawkeye: Freefall. It’s stylized and weighted art that is compounded onto by the coloring, making every impact and trail of blood feel real and firm.

DC vs. Vampires #4 is an issue that highlights the best and worst of the series, showcasing Schmidt's art and the odd pacing of the book. The book is worth reading for the art alone, and there’s still a chance the book’s mid-stretch could shift and come together, but it’s still too early to tell. In any case, the book is a fun, pulpy book that works in its best moments as a showcase of Schmidt’s art and Tynion and Rosenberg’s writing of specific character interactions.

DC vs. Vampires #4: Do You Believe in Magic?