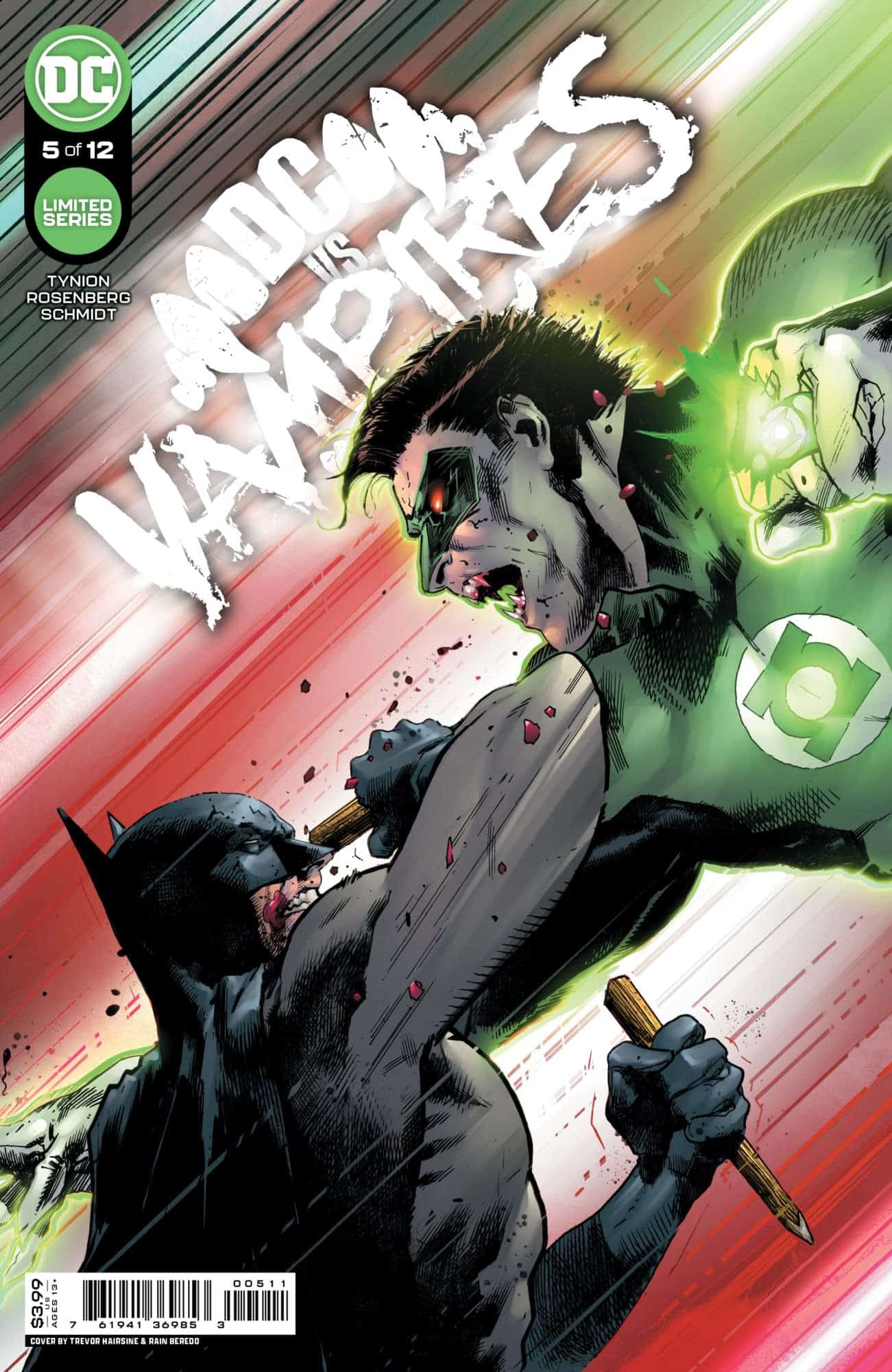 The future of the world is at stake as a battle to the death ensues between Batman and Hal Jordan! Will the vampiric Green Lantern be too much for the Dark Knight? Will the future of humanity be in the hands of…Jayna, vampire slayer? The bloody, bestselling series continues!

When done to great effect, the pairing of multiple artists on a single issue of a comic book can be invigorating. In a highly visual medium, getting to place two distinct styles side by side can elevate a book and make it stand out on the spinner rack. Otherwise, a shift in art like that can make a book uneven or rushed, one artist feeling more like a benchwarmer or filler rather than being a cohesive natural progression in the storytelling. Issue 5 of DC vs. Vampires, written by James Tynion IV and Matthew Rosenberg with letters from Tom Napolitano, sees regular artist and colorist Otto Schmidt joined by fellow double threat Simone Di Meo.

The issue picks up with a break from the previous story of the Justice League battling Batman and Green Arrow, and instead focuses on what Task Force X is up to as vampires spread across the world. Tynion and Rosenberg continue to bring pitch-perfect voices for the various characters, both writers showing their knack for ensemble books. Between this series and the other creature feature written by Rosenberg (Task Force Z), it would be nice to see the writer get a crack at the flagship Squad in the future.

It’s also thanks to the rise in profile for the team due to multiple films and animated projects that a fairly standard roster had emerged. While objectively a vampiric King Shark is amazing, it would have been nice to see some D-listers fill out the roster. With both writers’ histories on their various big two books and their knacks for pulling deep cuts, which would have been nice to see flexed in this corner of the world.

It’s curious why the creative team decided to bring in Di Meo for the art shift in this issue. The story is not a backup, but ties directly into the main plot, and is intersliced throughout the issue. Schmidt has had no issue bouncing around the various groups and corners of the DC universe, but the choice to bring in a secondary artist for the Suicide Suicide subplot is a fascinating one. Compared to a book like Strange Adventures, which had two artists on the entire series for a specific reason, this rotation just felt a little out of left field. With a little more connective tissue – maybe a bleed between the styles as established plotlines with the Batfamily cross with the Suicide Squad – the issue would have been perfect. Instead, it feels like an experiment that just barely misses the mark.

Thanks to the styled nature of both artists’ work, the change is not jarring enough that it takes away from the reading experience. It’s interesting that the two styles can exist together, as they feel like the opposite ends of the spectrum. Schmidt’s is scratchy and volatile, while Di Meo’s is much more smooth and fluid. What helps that smooth transition from one style to the next is the fact that both artists also work as their own colorist, creating two distinct but well-paired segments. Combined with Napolitano’s lettering that seamlessly adapts to the various factions of the universe, there is a consistency that makes the book feel like it’s cohesive even when those art styles jump back and forth.

With the book moving closer to its halfway point, DC vs. Vampires remains one of the most consistent and pulpy books on the shelves. The issue makes an interesting artistic detour with Di Meo exploring the Suicide Squad’s reaction to the vampiric invasion. The alternating styles feel like two puzzle pieces that just barely lock in together, and it’ll be curious to see if they end up linking more in future issues.