DC vs. Vampires #6: A Dhampir in the Family 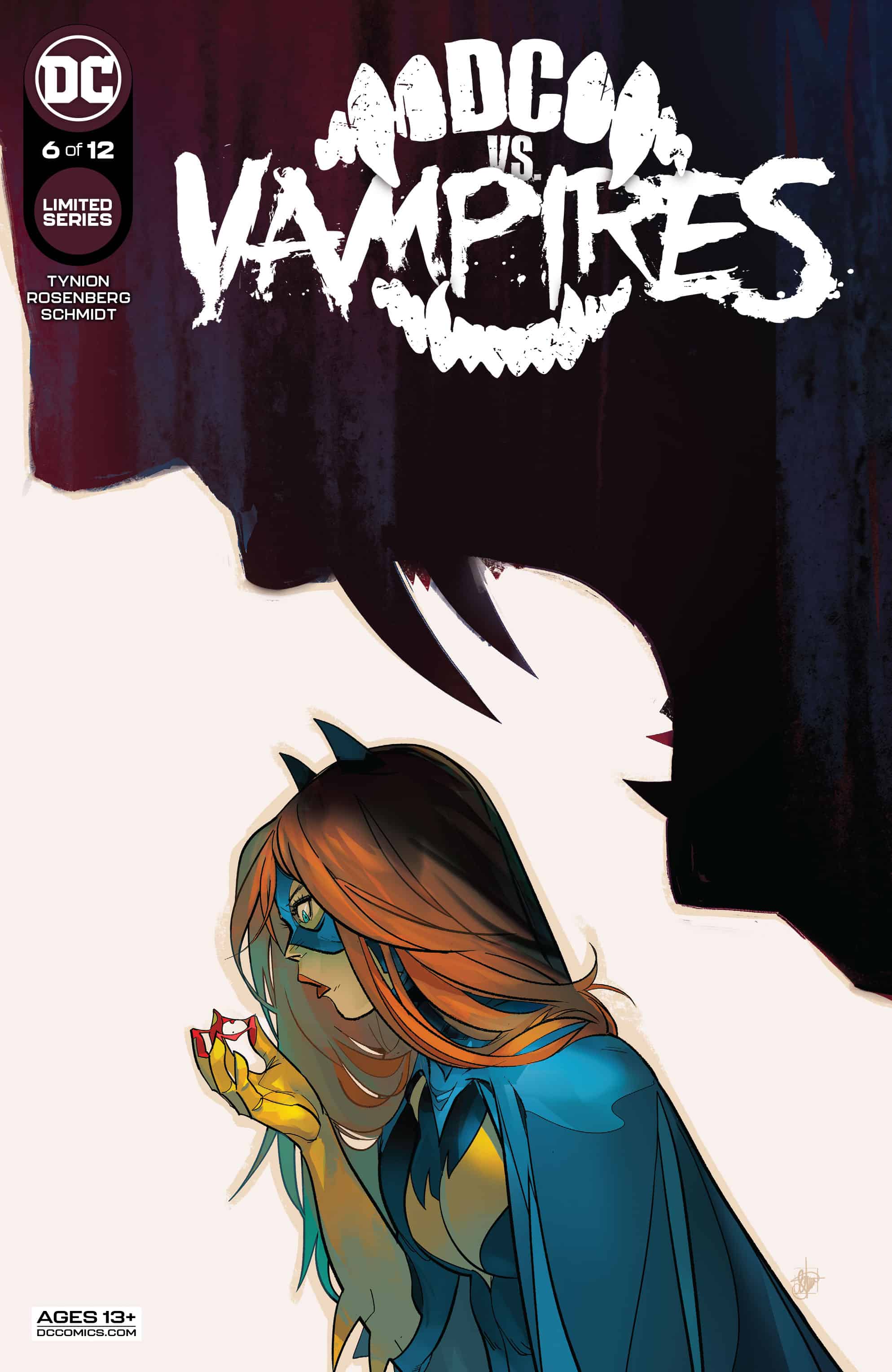 Batman gets the upper hand on the vampires who have infiltrated the Justice League...but the Vampire King finally reveals himself, and it will be the most jaw-dropping moment of 2022! The shocking, bestselling series reaches its blood-drenched halfway point!

DC vs. Vampires #6, written by James Tynion IV and Matthew Rosenberg with art and colors from both Otto Schmidt and Simone Di Meo, are joined by additional artist from Daniele Di Nicuolo and colorist Rex Lokus, with letterer Tom Napolitano rounding out the creative team.  The issue crosses the midpoint threshold of the series, and finally reveals the big bad. The book employs the Joker as a red herring for the identity of the Vampire King and sets the Bat-family onto a direct collision course with the newest villain. The issue also employs a surprise attack to take Batman off the table, mirroring how vampire-Hal Jordan was able to take the Flash down. It’s a smart way to take out DC’s resident master planner, and plays to the emotional core of the character, instead of the rational one. As the Bat-family and Green Arrow battle the Vampire King, the team is whittled down, and the creative team delivers an amazing last stand for [REDACTED]. The issue ends with the vampires stepping out of the shadows and on top of the heroes and world, setting up an excellent status quo for the back half of the series.

The subversion of the Bat-family tropes and roles is a stroke of genius from the storytellers. The choice to invert the expectations for both Dick and Jason is obvious in hindsight, but in the moment it’s such a spectacular reveal. Without going too deep into spoilers, which would ruin the experience of reading the issue, the script continues Tynion and Rosenberg’s excellent ability to capture such a wide breadth of character voices across the DC universe, even as the series has narrowed its scope to the Bat-family alone. The writing is reminiscent of Tynion’s time on Detective Comics, which proved his ability to handle a large ensemble while making sure the voices were unique to each character. Even with iconic characters being overtaken by vampires and turned into the undead, the writing duo manages to infuse a humor and tone that strikes at the core of the heroes dealing with these conditions.

The art shift from Schmidt to Di Meo is still distracting, breaking the flow of the book, and weakening the stellar art of the main story. The art change isn’t enough to discourage recommending the series, but it does hurt the overall experience of the series. It’s unclear if the change was an intentional decision from the creative team, or if this was a way to give Schmidt a break and a chance to catch up for the next leg of the series. In either case, the decision hurts the flow of the book, and it feels like two separate styles forced together rather than being a natural proceeding from one art style to the next. Changes to the art of the book can be employed to great effect, but the conditions have to be just right.

An interlude from an artist like Carmine Di Giandomenico would be a more natural fit with Schmidt’s style, as both have that kinetic, sometimes frantic, sketchy linework. With a partnership between a similar style, the change in art in this issue would have been a less jarring reading experience. The lack of cohesion between Schmidt and Di Meo’s two very stylistic pencils and colors ultimately do more harm than good to the book’s flow. The second shift, this time from Schmidt to Nicuolo is an easier change, as the two styles are closer together. Even though those styles are closely aligned in terms of linework, Schmidt’s pencils and expressions are more refined and polished and makes some of Di Nicuolo’s work appear unfinished or sloppy in comparison. Going from Schmidt’s expression filled art work to the last two pages with Di Nicuolo’s snapshots of the DC Universe is a change in detail that will not be for everyone.

It’s also possible that giving four issues of Schmidt’s unique pencils and absolutely stunning colors uninterrupted set an unfair expectation for the book, and any change in art no matter how talented the interlude artist is (which Di Meo is definitely one of the more talented choices) will be a slight disappointment. The experience would be like Ivan Reis rendering pages in between Greg Smallwood’s art for The Human Target.

It would be an interesting experiment to see Schmidt provide colors to Di Meo and Nicuolo’s art as a possible way to try and bridge the art, as coloring has proven to be a great cohesive force in varying styles. One of the reasons that the one-two punch of House of X and Powers of X was so effective and felt so in harmony was thanks to the sublime colors from Marte Gracia. His colors provided an additional layer of continuity to the two art styles spanning time, reality, and genre. It would be fascinating to see if either Schmidt or Di Meo redid coloring on the other’s linework if it would help to ease that jarring experience of switching between the two styles.

DC vs. Vampires #6 is a masterclass in subverting the tropes of extended superhero families. Certain expectations are ascribed to specific heroes, which can sometimes cause rote stories, and it takes a deft hand to invigorate those characters. Tynion and Rosenberg channel their experience as Batfamily writers to put a fresh spin on the roles each one exhibits and sets a striking reveal in the family. Joined by the separately impeccable art and colors from Schmidt and Di Meo that doesn’t meld well, the book keeps the seemingly simple premise of the DC Universe battling vampires in a Secret Invasion-esque storyline fresh and unexpected.

DC vs. Vampires #6: A Dhampir in the Family