DC vs. Vampires #7: In the Air Tonight 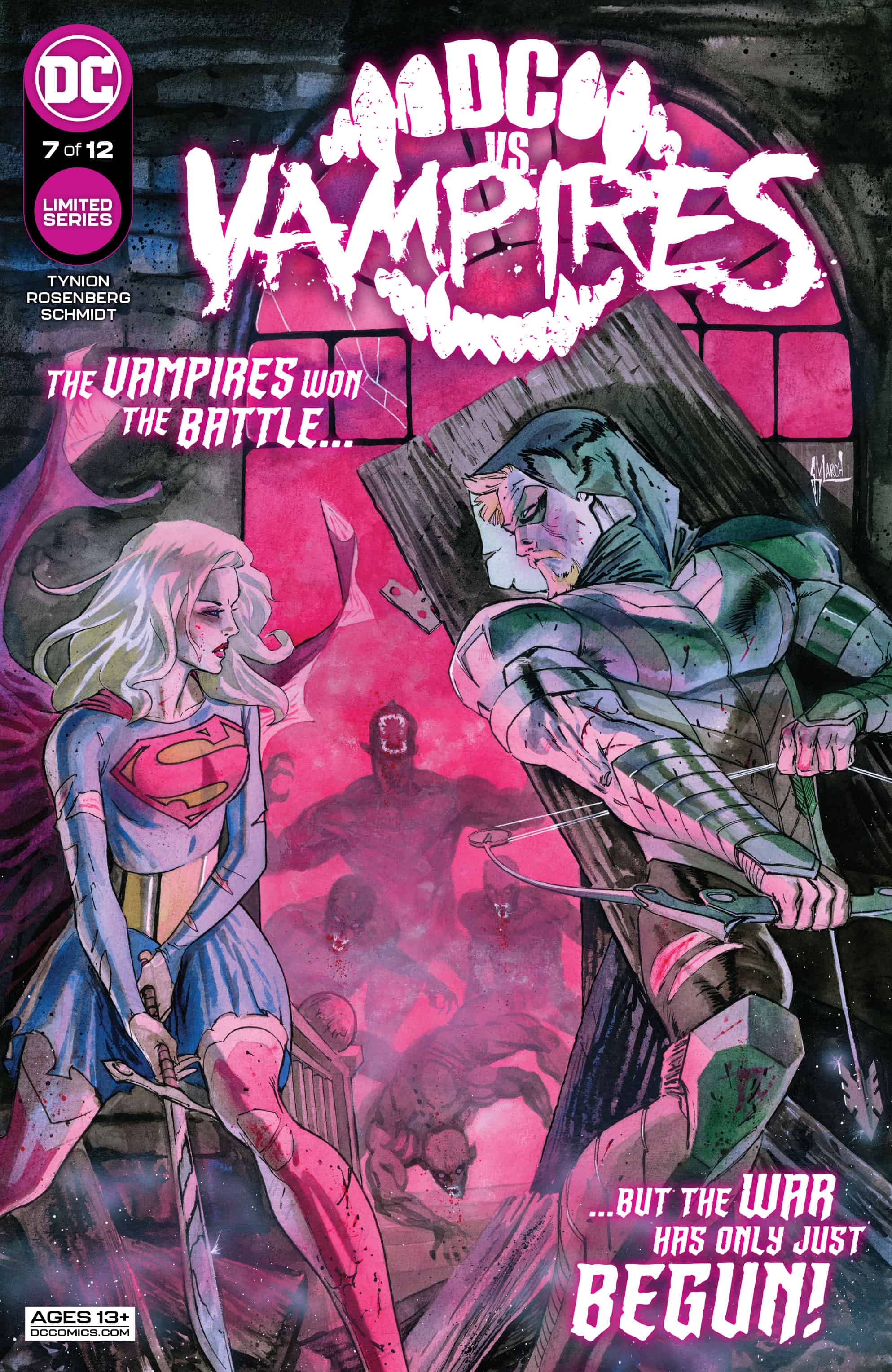 The nightmarish second arc begins! The Earth is now cloaked in darkness as the victorious vampire empire has taken full control. Pockets of humanity can still be found, and they struggle to live but hope fades with every darker day. The leaders of the last surviving resistance force-Green Arrow, Batgirl, and Supergirl-hatch a desperate plan to save the world...or die trying!

One of the best parts of superheroes and superhero comics, in my humble opinion, is the element of costuming. There’s a reason why certain designs and looks stick with some and repulse others, and why even after 80-plus years, there’s still a debate about trunks or no trunks on Superman. Costumes provide numerous functions in superhero comics, from imbuing personality to distinguishing characters as legacies only grown. Look at the Bat-family, for example. Across five Robins (four of which have taken new identities), three Batgirls, a couple of Batwoman, and more, each character has been able to establish themself both in relation to, and against Batman. Through a character’s costume decisions, a strong artist can provide a cohesiveness across a line of heroes that still retains their individuality. A book like DC vs. Vampires showcases the power of good designs as it moves across the DC landscape, giving artist Otto Schmidt the chance to flex his muscles and render these characters in amazing detail.

DC vs. Vampires returns with issue #7 with its initial creative team of writers James Tynion IV and Matthew Rosenberg, artist and colorist Otto Schmidt, and letterer Tom Napolitano. The issue quickly recaps the end of issue 6, along with details from the two one-shots (All-Out War and Killers) that have bridged the gap between the arcs of the story. The Vampire King has been revealed to be Nightwing, and the bloodsuckers have successfully infiltrated the superhero community, converting powerhouses like Wonder Woman, Green Lantern, and Superman. Societies have also fallen, the vampires having blocked out the sun, throwing the world into an endless night. Tynion and Rosenberg waste no time getting the audience refreshed or caught up, letting Schmidt provide the reminder in three stunning pages.

The bulk of this issue establishes the stakes (no pun intended) and the ordinary world under the thumb of the vampires. The contingent of heroes left to resist the vampires, led by some of the lead p.o.v characters from the first half of the series like Batgirl, Green Arrow, and Jayna of the Wonder Twins, are reduced to hiding in an empty bottle city of Kandor. It’s a bleak status quo, and even as these characters have been shrunk and dealt with tragedy after tragedy, the writing duo still maintains the character’s respective voices. Constantine is still flippant and desensitized; Green Arrow is still a voice of opposition, and so on. It’s a testament to Tynion and Rosenberg’s script that even as more characters are introduced or reestablished that no one feels out of place or actively working against their character.

With the book having also taken a good chunk of the Bat-family off the table in the first arc, the team gets to start pulling in deeper cuts. The book starts with a team consisting of Adam Strange, Wild Dog, Killer Frost, Raven, Negative Man, Peacemaker, and Crazy Quilt. It’s a shame the team functions like the Suicide Squad and gets taken out quickly because the team endears them instantly, and DC needs to give this team a six-issue mini, stat. Mr. Bones, the leader of this merry band, is dispatched as well, but is found and instructs a post-apocalyptic themed Jayna to deliver a package to the resistance of heroes. That’s the lead plot of the rest of the issue, and even though it mostly serves as a set-up for the back half of the series, Tynion and Rosenberg obscure the minimal story through characterization. It’s a smart move to help orient the reader in a brand new world that’s been upturned in the span of six issues and once again reinforces the duo’s storytelling ability.

The scripting would not work with all artists, and in terms of a magic trick, Schmidt’s art serves as a distraction for the storytelling sleight of hand. It’s a welcome distraction as Schmidt returns to full art and coloring duties for this issue, elevating the premise and solid writing. The first splash of the issue alone makes up for the art changes in previous issues, detailing a massive, Civil War-esque fight sequence between the human and turned heroes. With this issue jumping forward in time, Schmidt also gets to flex his costuming muscles, giving established characters like Barbara Gordon’s Batgirl, Green Arrow, and John Constantine new designs. Anyone who follows Schmidt on social media knows the artist’s love for reinventing and tweaking character designs, and giving him the chance to incorporate it into this book is an inspired choice.

The designs are more than just cosmetic, as they key the audience into the state of the world, revealing just how rough it’s gotten since the vampires blacked out the sun and took over. The costume change for the characters also serves a practical reason, as characters like Batgirl, Constantine, and Green Arrow have upgrades that provide additional neck coverage, a necessity that could have saved other heroes earlier in the book. It’s a small detail but shows just how much Schmidt puts into the design work of the characters he’s drawing at any given time.

Schmidt’s designs on their own are great, but combined with the artist’s visceral colors, make the book feel even more of a powerhouse. Reds permeate the issue more than those previous, giving the book a feeling of a vampire story, obviously, but also that of a Crisis. Of course, this is not a reality-shattering, continuity rebooting story, but the scope of the series plus its focus on secondary characters feeds into that echoing effect towards the foundational DC stories. Schmidt also knows exactly how to play off the reds as well, not letting the background swallow the action or colors of the foreground. There’s a battle between Heatwave and Killer Frost in the issue, and Schmidt’s coloring gives a perfect delineation between the burning flames from the heat gun and the blood-red skies. That matched with Frost’s bluish-white ice powers gives the book a visual feast that is hard to encapsulate in words. It deserves to be experienced without description or expectations set, much like the rest of this issue.

In a climate of Dark Crises, Flashpoint Beyonds, and Shadow Wars, which all claim to be the biggest events, and promise that the DC universe will never be the same, it’s refreshing to jump into a book like DC vs. Vampires. With issue 7, the book has proven that a simple story, amazing art, colors, and a fun, pulpy concept can mix and form a compelling read. For fans of DC characters or the fun sketches that grace Otto Schmidt’s social media, DC vs. Vampires is the book for you. It’s nice to only have to worry about the continuity of six issues (or eight, depending on your tie-in opinions) instead of an entire decade’s worth.

DC vs. Vampires #7: In the Air Tonight