DC vs. Vampires #8: Who We Do in the Shadows 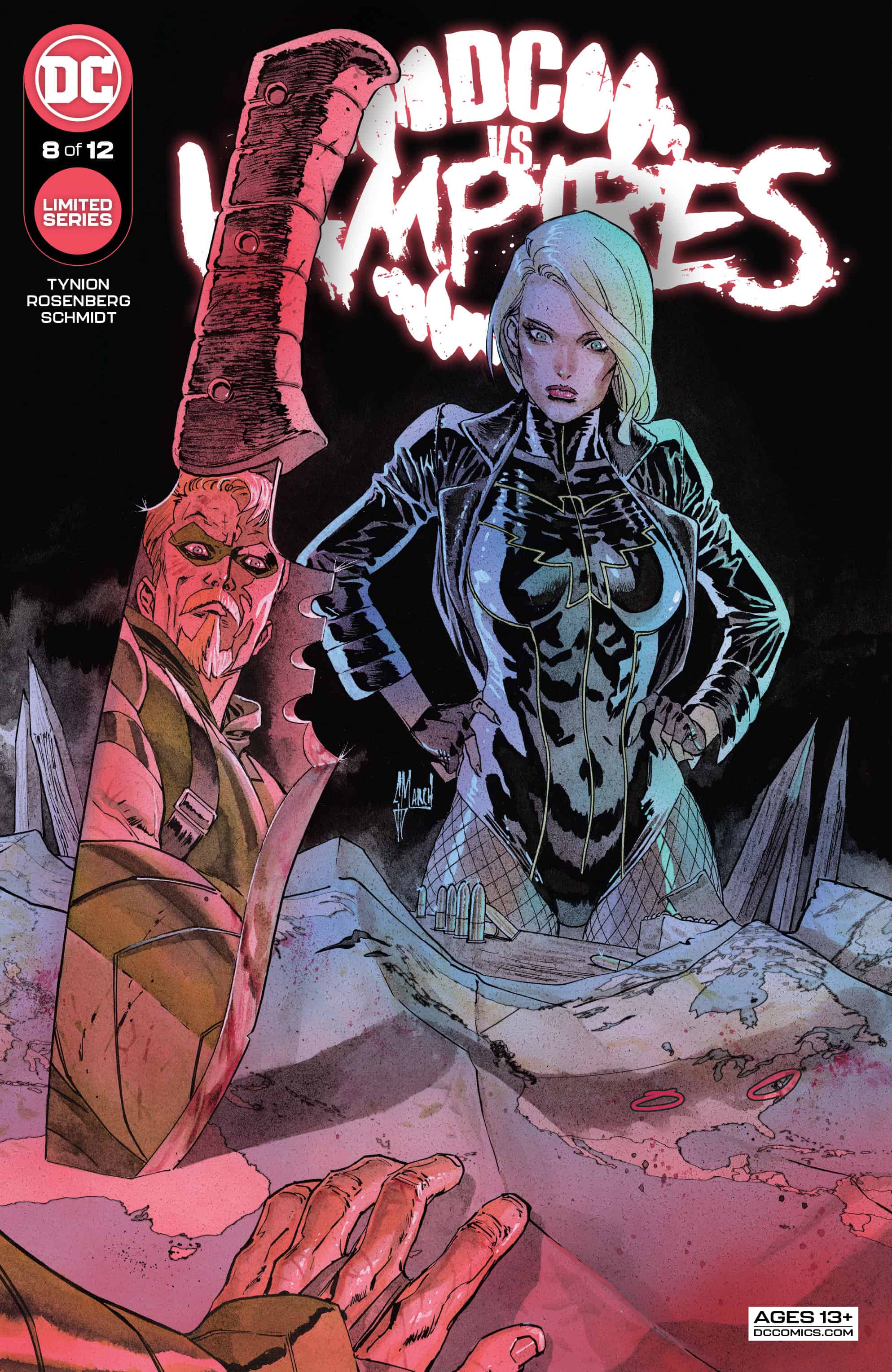 THE BATTLE FOR EARTH CONTINUES IN THIS BLOODTHIRSTY SERIES! The surviving heroes put their various plans in motion in their last attempt to save humanity! The Birds of Prey are out for blood and head back into the heart of the vampire kingdom: Gotham City! Supergirl must cross a vampire-infested ocean and Green Arrow’s mission is…just too horrifying to mention!

DC vs. Vampires #8 – written by James Tynion IV and Matthew Rosenberg, with art and colors by Otto Schmidt, letters by Tom Napolitano and additional art by Daniele Di Nicuolo, and colors from Pierluigi Casolino – works as a regrouping and set-up issue, taking the various pockets of surviving heroes and villains and putting them on their respective paths towards the series’ conclusion. The script makes sure to weave the Justice League Dark’s attempts to cure the vampires, the tension between Green Arrow and Black Canary’s priorities, and Batgirl’s plan to finish The Vampire King (Nightwing) into an emotionally compelling read with minimal action. It’s a chance for the entire creative team to refocus as the series makes the sprint into the big confrontation with the ruling vampire nation, and explores interesting character dynamics in what feels like a bated breath.

The collision of unexpected characters and elements is the biggest draw of this series, both on a narrative and a visual level. Tynion and Rosenberg can leverage their strong understanding of the DC universe and the core tenets of characters across the hero/villain line, and get something new from dropping them into this pulpy, vampire-controlled world. From seeing Damian Wayne work with Constantine and the Justice League Dark to Supergirl and Ryan Choi’s Atom sharing a tender and comedically undercut emotional moment, there’s so much to enjoy in just how the wider DC Universe can be when Superman and Batman are off the table.

Another strength of the script is the continued rooting of the p.o.v in Black Canary and Green Arrow, who gives a grounded perspective to the massive threat while maintaining an emotional core that keeps the human survivors unified. The most compelling sequence of the book isn’t a magical ritual, a massive action sequence, or dramatic cliffhangers. It’s the quiet moments of Ollie and Dinah realizing their paths diverge in the back end of this series, and choosing to embrace one another before they depart. It’s a gut punch that affirms why this couple is one of the beating hearts of the DC universe and affirms the personal stakes for these heroes as they begin their final attacks on the vampires.

Much of that care comes from the book’s scripting, but it’s matched in equal part thanks to Schmidt’s linework and coloring. Schmidt gets to take some interesting swings in this issue, giving a layer of emotional depth and romance to a pretty straightforward pulp action series. First the one last time before the mission embrace that Green Arrow and Black Canary share, which is much more formalistic and in line with Schmidt’s typical style, using a lighter palette to evoke magic hour with the lighting. Later in the issue, there’s a dream sequence of Barbara meeting up with Nightwing that starts in Schmidt’s defined style, but quickly devolves into an even looser depiction of the two embracing, the coloring and penciling evoking an abstract painting, the two literally merging before refocusing towards the end of the dream. It’s an enthralling page, showing just how loose and abstract Schmidt’s work can get with the right subject matter.

The art shift in this issue is a lot less distracting than the previous ones. When Di Nicuolo takes over penciling duties, paired with Casolino’s colors, the shift feels more natural and carries on the spirit of the visual language. Schmidt’s art is one of the most unique and gripping styles working in the big two. The danger of having such a unique and specific style is that when set next to other looks, it can cause a major dissonance. The art, and the coloring as well, that Di Nocuolo and Casolino bring to the issue curb that dissonance and made me double back to check the credits page. It’s a cohesive change that allows the book to keep its flow and underlying ethos.

This book is a fun story, with pulpy art, vibrant colors, and stunning lettering choice, but above all else, is a great reminder of Schmidt’s talents and a portfolio for various books that he would crush if given the chance. It’s an honest tragedy that Schmidt has never worked on a Birds of Prey series (either an ongoing or a mini), and every issue of DC vs. Vampires proves that a Justice League Dark with Schmidt’s visual of magic would be spellbinding. Hopefully just as DCeased gave Tom Taylor’s career a push, Schmidt will make a bigger footprint and get more opportunities to play in various parts of the DC sandbox.

DC vs. Vampires #8: Who We Do in the Shadows