DCeased: War of the Undead Gods #1 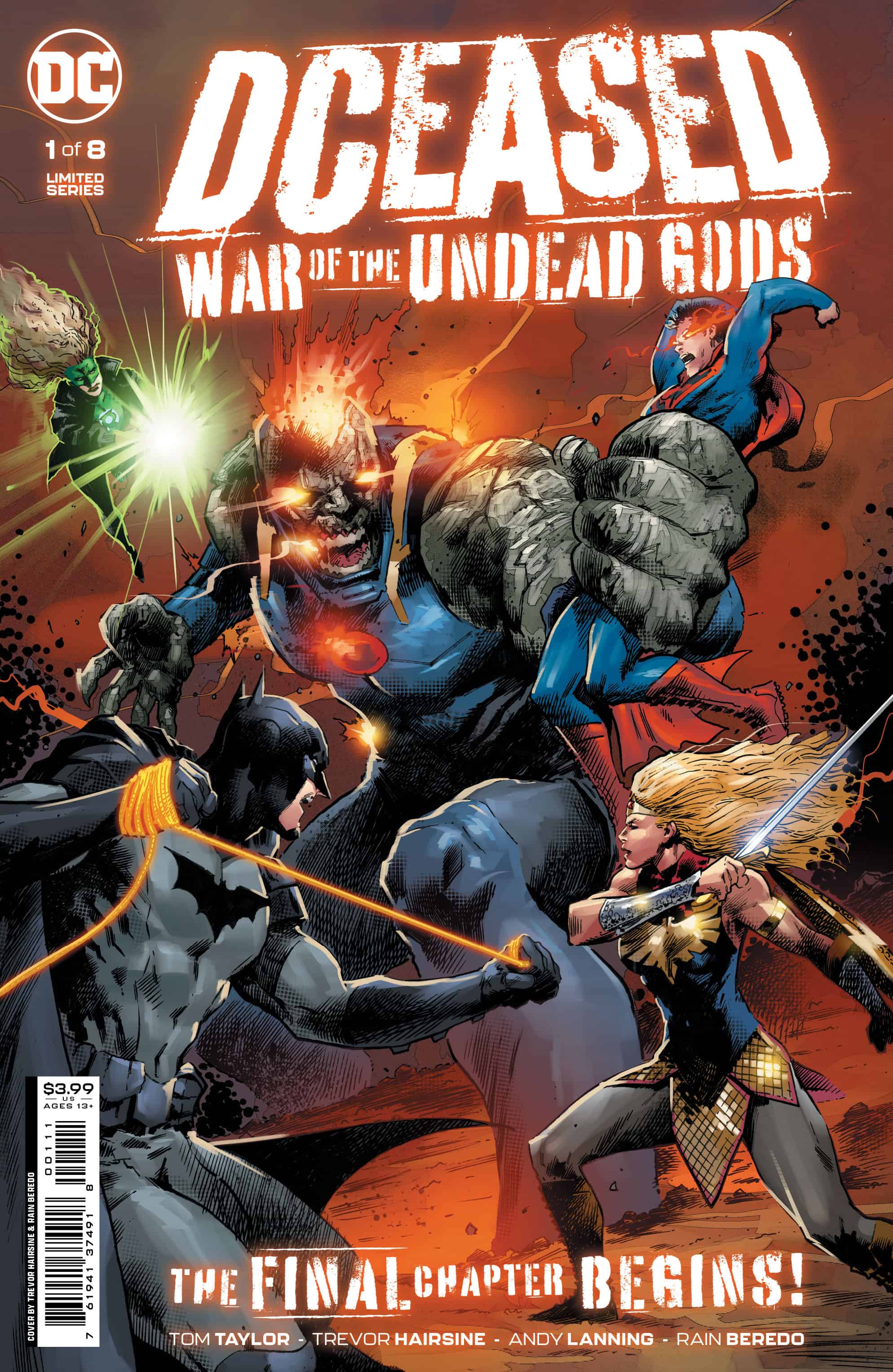 What began as a battle for Earth has become a war for the galaxy as the epic final chapter in the massive DCeased franchise is here! The emergence of a reborn, undead Darkseid in DCeased: Dead Planet sets the stage for the most devastating conflict yet for Batman, Superman, and Wonder Woman! As the Anti-Life Equation spreads into the cosmos, the survivors of Earth prepare for the coming apocalypse and realize their only hope could lie in the most powerful surviving hero from the first DCeased series... The bestselling creative team of Tom Taylor and Trevor Hairsine return for their third and final installment in War of the Undead Gods!

A problem with interconnected universes, and especially those that have existed for 80+ years, is even with reboots and retcons, continuity can become tangled. Thinking of a shared universe like a garden or lawn, the extended shared continuities are usually overgrown and untamed, having to contend with both newly potted plants and the native species that sprout in the soil. Writers, storytellers, and editors generally have to play the role of gardener, making the choices on which plants to transplant, remove, trim and more. The trick, in some cases, is to just start over and design a new garden from the ground up, taking a few of the pivotal plants from the original, and using a new fence (genre or format, to relate to comics) or planter. But by starting that new garden and letting it prosper, it becomes apparent that with a rolling of the sleeves and some determination, the original garden can flourish just as much. Books like DCeased are those new gardens, showcasing the established characters and ideas, but making them more organized thanks to a methodical realignment of continuity.

DCeased: War of the Undead Gods #1 – written by Tom Taylor, with pencils from Trevor Hairsine, inks by Andy Lanning, colors from Rain Beredo, and letters by Saida Temofonte – opens with an exploration of Kara Zor-El’s origin in the DCeased universe, diverting from regular continuity by having her parents send the young, but fully grown, Kryptonian to New Genesis to live with the New Gods. The Zor-Els are fully aware that Jor-El is sending Kal to Earth, to live with what they call “the primitives” while Kara will have the chance to live with Gods. From there, the rest of Kara’s origin is left intact, where she travels in stasis across the universe, but another zag occurs when Kara finds the planet consumed by Anti-Life, thanks to the events of the original DCeased series.

After the prologue of Kara’s story, the issue jumps back to Earth and Earth-2, dealing in the aftermath of DCeased: Dead Planet, in which the heroes were able to find a cure for the Anti-Life virus and work to restore the zombified population. As the new Trinity of Jon Kent Superman, Damian Wayne Batman, and Cassie Sandsmark Wonder Woman, go to work with Cyborg and Green Canary to restore the original Superman, Brainiac and his probes approach the newly restored world and give a warning of a new threat to come, one teased at the beginning of the issue.

Taylor’s script for this first issue does a great job expanding the DCeased world, building up just as much as it destroys throughout the main titles and the various spinoff mini-series. In an issue that introduces Supergirl, reestablishes the New Gods, and seemingly cures the Anti-Life infected on Earth, it’s a testament to Taylor’s craftsmanship to ensure the issue never feels rushed or detached from the character work that has defined the series.

Taylor perfectly blends the high concept, cosmic moments with intimate scenes masterfully, grounding the book and giving it a substance that justifies the continued existence of the series. After the zombies have been cured, Taylor hits hard with a scene of Alfred having to reckon with the fact he killed a large portion of the Batfamily in the original series, and Damian is the one who has to try and comfort the butler. It’s an excellent role reversal and works on multiple levels to reflect the wounds that have yet to heal.

The ability to balance the two elements is proof that in the hands of capable creators, DC’s lore and continuity are a boon and not a hindrance to the story. It seems that DC’s Elseworlds-style books (even though they won’t be called Elseworlds these days) are the place that can play with established continuity and thrive in it. Compared to the mainline, which feels disjointed and unfocused in light of Flashpoint Beyond and Dark Crises, these out-of-continuity series like DCeased, White Knight, and even DC vs. Vampires can handle legacy characters and DC lore without issue. It’s of course easier when a creator can pick and choose what continuity they plan to use, along with working in a much more limited scope. Series like DCeased should be proof to DC that with strong talent, and adequate time, creating a cohesive line is possible, and rewarding narratively.

Hairsine’s art is strong in this opening issue, separating itself from the previous DCeased titles by embracing a style more reminiscent of action-oriented comics, and less influenced by horror styling. The action is less visceral and more bombastic as the big fight is the heroes vs Brainiac. The established visual language of how the infected and characters look from previous volumes is still on the page, but Hairsine expertly adapts to the shift in scale and tone. Part of that change is thanks to Lanning coming on as an inker for the series, giving the linework a less harsh accent, as though a weight has been lifted from the characters and their reality, if only temporarily.

Hairsine also continues to do a great job distinguishing the various versions of heroes and their legacies. In sequences with two Supermen, multiple Amazonians, and more, characters stick out and exist clearly on the page. One can only hope that some of the designs from this series carry over to the main continuity as characters like Cassie and Damian only get older as time in the main universe lurches forward. Some of the facial expressions can get a little dicey with non-masked characters, especially in panels with Lois Lane or the returning Kent’s, but its so minimal that it doesn’t take from the issue’s flow.

DCeased: War of the Undead Gods #1 is a strong first issue on all fronts, propelling the title into its third (and final) act. With an establishment of new elements to the wider DCeased universe and the return of vital characters, it's apparent that Taylor has prioritized character and emotional storytelling over spectacle and the trappings of the zombie genre, and that narrative throughline is clear in the art and inking as well.

Fans looking for a DC universe that is coherent and willing to embrace its legacy without abandon should pick up this series, along with those interested in the intersection of the Superfamily and New Gods. On its own, War of the Dead Gods is a fun read but will benefit from going back and reading the other titles in the DCeased universe.