DCeased: War of the Undead Gods #2 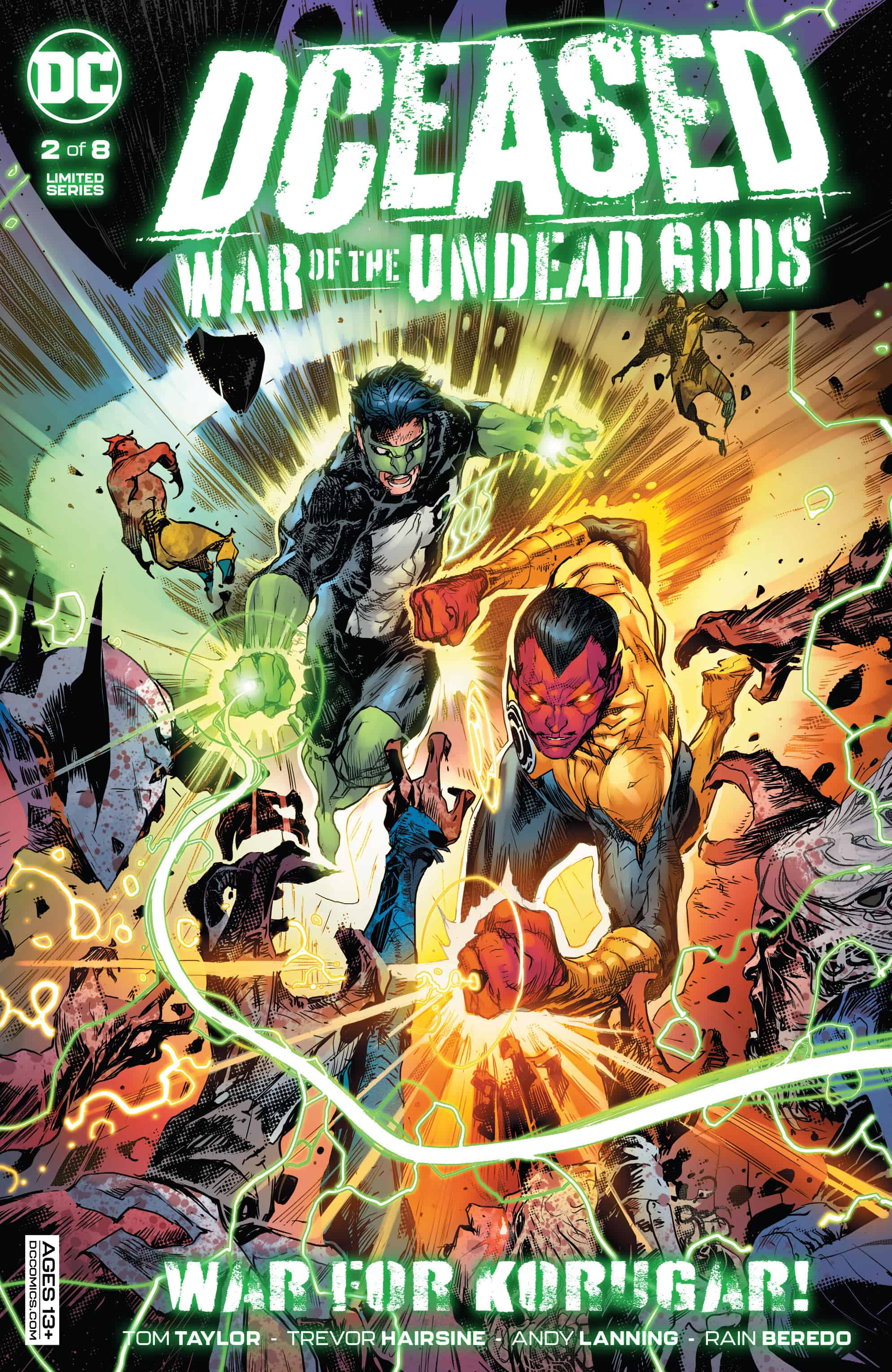 The undead Darkseid begins his assault on the galaxy…attacking Korugar first! Could the fate of the planet depend on the Yellow Lantern Corps teaming up with a Green Lantern? Also, what horrors do Big Barda and Mister Miracle find on New Genesis?

Outside of red, bright colors and horror might not seem to go together on paper. Still, talented creators can use a variety of palettes to alter the effectiveness of horror in a story. A bright pop of color can be used to signal significance to a character or item, or it could help to push a killer or monster into the more abstract, working against expectations. A muted palette may feed into the inherent darkness of a horror story or give an edge that creeps into the audience’s mind as the terror sets in. In either case, the use of color can bolster the effectiveness or brutality of a horror story, and a book like DCeased knows it.

DCeased: War of the Undead Gods #2 – written by Tom Taylor, pencils from Trevor Hairsine, inks by Andy Lanning, colors from Rain Beredo, and letters by Saida Temofonte – continues to deal with the fallout of the previous series, this time linking to the original tie-in issue of DCeased. Big Barda, like the other heroes of earth, has been cured of her infection, and she and Mister Miracle head to New Genesis to find their son. Instead, they’re treated to reveal that Darkseid has infected the New Gods and their Motherboxes and is working to infect his way through the universe. Meanwhile, the information is confirmed by Brainiac to those on Earth-2, explaining his reasons for allying with Superman and his enemies.

The second half of the issue is focused on Darkseid’s attack on Korugar, aka Sinestro’s homeworld. The villain and his yellow corps find themselves aligned with Kyle Rayner and Soranik (Sinestro’s daughter). The makeshift alliance begins to repel the infected but is dispatched the moment Supergirl makes her twisted appearance, Siniestro buying the Lanterns enough time to escape. Darkseid decapitates Sinistro and infects Warworld itself, signaling more doom for the universe at large.

Taylor’s writing is solid in this issue, keeping in line with the previous titles, pulling from the lore he’s worked to build over the three volumes. This is a series that promised a chance for characters like Barda and Superman to move forward, but it does an excellent job reminding the past is more than just a prologue. Taylor has cultivated his own continuity across the horror series. The crop is plenty in the endgame, as the script can reap those emotional beats enriched by the titles’ history. The Barda/Mister Miracle plot would lack the punch it has without the one-shot, just as the threat of Darkseid works, thanks to the original series.

Hairsine’s art is consistent across the issue, but in a title dealing with Zombie Gods and the DC cosmology, it would have been nice to see it dip into more cosmic horror. The book leans closer to action/horror like previous DCeased titles and could have used the variation. The style is not a detriment to the issue but would have bumped it higher to expand the spectacle and visual language. The closest it gets to something in that vein is Supergirl, appearing initially as a blurring figure across the page. Hairsine and Lanning give Kara a frantic, unhinged updating of her traditional design, with jagged scars across her face, matching the lines used to convey her moment. The rendering gives her a feral appearance that gives the impression she is a force of nature, untethered to even the power the Lanterns have. It serves as a pretty effective introduction for the character to other heroes in the DC Universe. It could have been even more powerful if she was never shown or only given a glimpse.

Elsewhere, the art is more in line with the book’s previous style, the linework being more contained and calm with Brainiac and the other heroes. Those moments lack the hectic action of Lanterns vs. the infected, but Hairsine still gets to play with some horror iconography with Brainiac’s suspended, half-destroyed body. It’s a scene reminiscent of a half-finished Frankenstein’s monster or a half-functioning creature stuck in a sci-fi horror story. His design is unnerving even as the villain argues with Guy Gardner about intelligence ratings. It’s a sequence that functions as the calm before the storm, with unbound energy just simmering beneath the pages.

That sense of frantic, chaotic linework is matched in the book’s coloring, with Beredo’s palette utilizing more reds, crackling blacks, and the gold of Supergirls hair. The colors from the Kryptonian overwhelm on the page, and her sequence of implanting an infected Motherbox on Warwold is stunning, her speed trail forming from a strip of her costume’s colors bolstered by the red/black Kirby krackles and blood red heat vision matching her face wounds. It’s a literal horror show and indicates how well the horror blends with the bright, almost technicolor shades of the DC Universe.

DCeased: War of the Dead Gods #2 is another strong step towards the inevitable conclusion to the zombie-themed universe. Taylor’s script builds off of and thrives thanks to the established lore of this universe while Hairsine and Lanning's art sells the action horror of the upcoming conflict. Supergirl steals the show in this issue, thanks to a brutal introduction, and stunning use of colors. Those colors give the book an additional dimension, especially when Lantern's rings fly, or energy krackles. It might be a little daunting to jump in now, but this issue makes the case to revisit and see what other seeds were planted in previous issues of DCeased.