Deadbox #1: “The Downfall of Civilization Will Be Its Willingness to Defend Stupidity as Freedom” 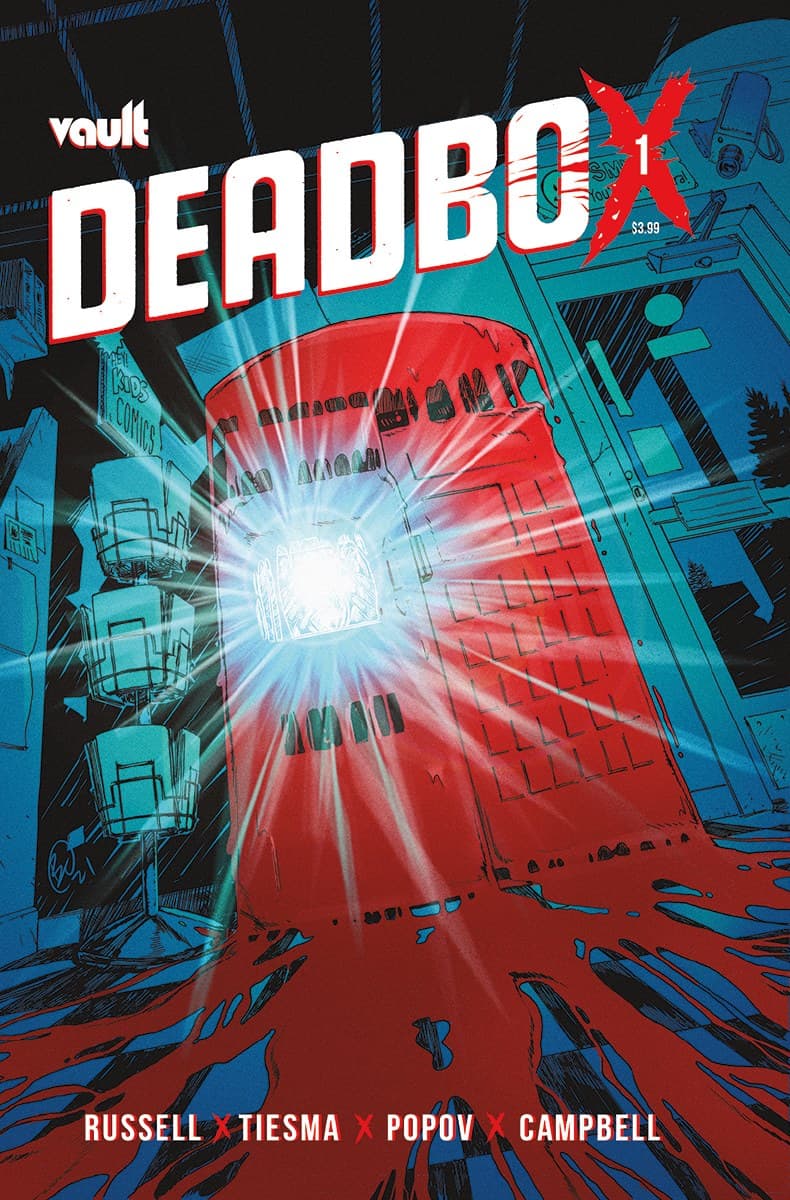 Forget Redbox... this is DEADbox! In the do-nothing, go-nowhere town Lost Turkey, Penny was all set to go to college when her dad got sick. All she has now is to care for him and run his convenience store. The town's only source of entertainment is the store's Deadbox, which contains movies nobody not only has never heard of, but don't seem to have ever existed at all.

And these movies might know more about the townspeople's fates than they do...

DeadBox, the latest from master satirist/social commentator Mark Russell, has a heck of a lot to chew on. Less on-the-nose with its analysis than previous entries in his oeuvre, there’s commentary, to be sure, about the concept of ownership in and of itself, and maybe about a half-dozen other things, but what Russell is trying to say, exactly, isn’t evident just yet. What he does do is set the mood and tone for his story in the exact right way that a sense of ominous dread sets in within a few pages. Although what that dread is just yet remains to be seen.

On its surface DeadBox has a fun, Saturday-night-basic-cable premise: a haunted (maybe)  DeadBox machine whose movies seem to tell the fates of the town’s denizens. Penny, our heroine, is stuck having to shelve her college ambitions in order to care for her sick father, and is feeling the crushing ennui of small town life. The DeadBox, though, only contains movies no one has ever heard of, and there is no record of having ever been made. It’s also the town’s only source of entertainment: there’s no movie theater, nor even any WiFi. The town’s residents are low-key quirky in a way that sets up there’s more to be revealed about them on down the line. Especially the cowboy, paraphrasing Kierkegaard… 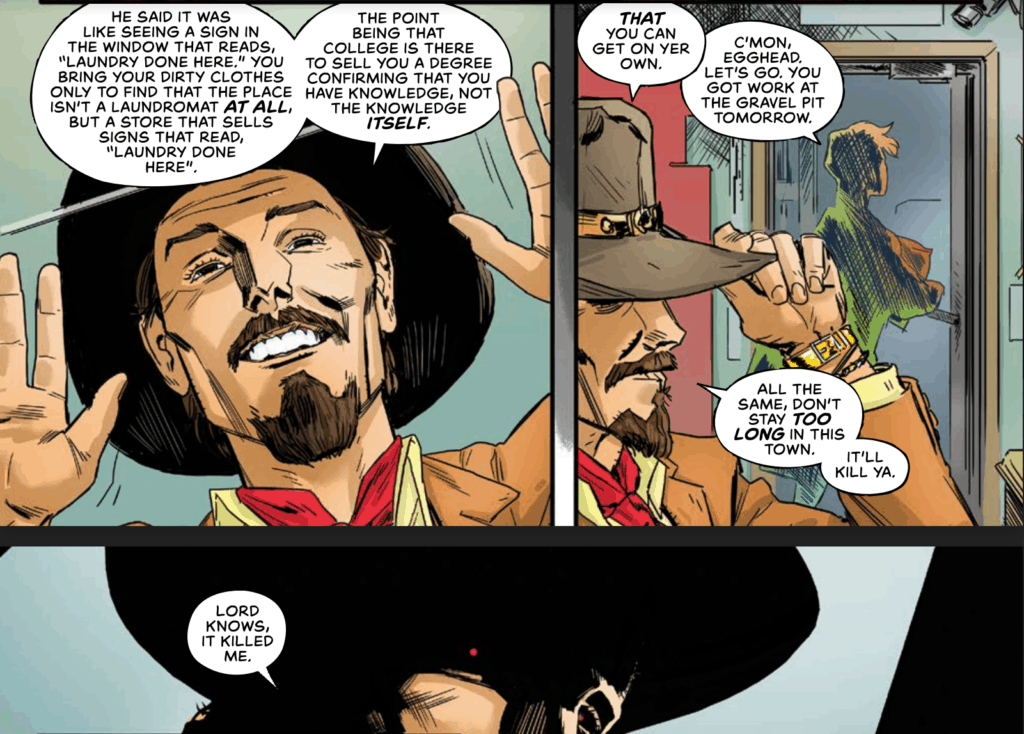 There are a couple of different allegorical levels that Russell is working on here. One is a book Penny is reading about the concept of ownership, specifically to land but the concept in and of itself in general. What does it mean to “own” something? Especially something as universal as land? It’s not quite clear yet how this plot thread dovetails with the goings-on in Lost Turkey, but it’s a damning indictment of Manifest Destiny nonetheless.

The second interlocking subplot is from the DeadBox movie Penny chooses to watch, “The Lonely Planet,” about a space traveler who takes fifty years to reach his alien destination and be the first Earth man to make contact with an alien race. Both species are excited, but by the time the traveler arrives five decades hence, let’s just say things don’t go as joyously as planned. The final page of this issue seems to be the twist that interlocks “Lonely Planet” to Penny’s tale, but unfortunately it isn’t totally clear if that’s the case. Which is fine, because I was hooked enough to want to read the remainder of the story, but depending on the reader’s take, might be a bit too vague. Either way, there’s a lot to process, as Russell is a writer who adores working on multilevel stories, and that’s a great thing. Intelligent writers operating on the level he does are few and far between.

Of course, DeadBox isn’t a one-man band. Along for the ride are penciller Benjamin Tiesma, colorist Vladimir Popov, and letterer AndWorld Design. Tiesma has cut his teeth on the considerably gnarly Dead Body Road from Image, Popov has worked on various other Vault projects such as Lunar Room, and AndWorld has worked lettering magic on pretty much everything you can imagine. Tiesma brings a grounded sensibility to DeadBox‘s slow, creeping dread that reminds me of the late, lamented Chilling Adventures of Sabrina‘s art by Robert Hack (who graces the book with an awesome variant cover). There’s a groundedness to Tiesma’s art that brings the entire story down to Earth, honestly feeling like it could be taking place in the tiny town next door. And that seems to be exactly what Russell is going for here, in his first foray into straight-forward horror. After all, what could be scarier than the horror right down the street, lurking in broad daylight?

DeadBox #1 brings a sense of creeping dread to small-town ennui that is steeped in allegory that will leave you pondering this comic long after you've finished reading it. Don't miss out!

Deadbox #1: “The Downfall of Civilization Will Be Its Willingness to Defend Stupidity as Freedom”