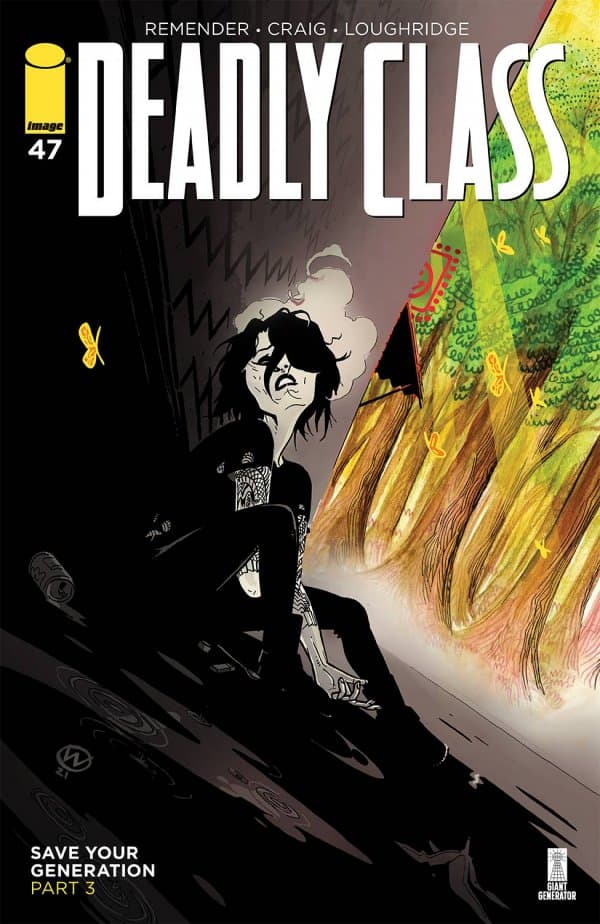 In the years since leaving King’s Dominion, Saya has – like so many of her other (and still-breathing) classmates – fallen on hard times. Chewed up and spit out by not only the system but a world she was never ready for, things are looking increasingly perilous for the former master assassin… 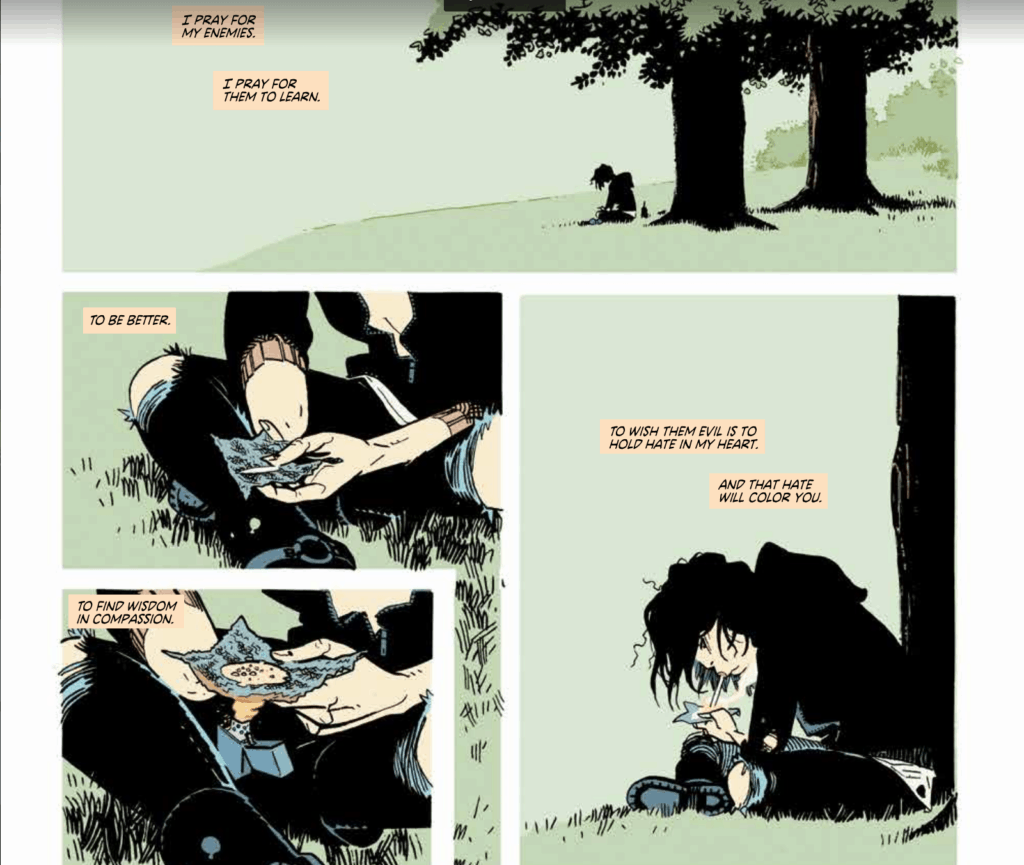 Deadly Class is a comic that will break your heart. Every time. Issue forty-seven is no different from the preceding forty-six, focusing this month on Saya. Jumping the story ahead to 2001 (as has been writer Rick Remender’s gameplan for the current arc, “Save Your Generation”), we catch up with the one-handed former master assassin living off of pawned, stolen watches and freebasing crack. This is not staring-at-a-trainwreck voyeurism, though – there’s a wistfulness in Remender’s narration from Saya that is full of a quiet sadness and tender longing for a life not led.

Throughout the course of its run, Deadly Class has served as a blistering commentary on the social mores of Generation X, echoing Remender’s own youth as an angry punk in the ‘80s. “Save Your Generation” part three takes the anti-authority adolescents of the ‘80s and jump-cuts them hard into adulthood, and discovering the hard way that piss and vinegar alone aren’t enough to change the system. More often than not, Remender seems to be saying the system just happily steamrolls over even the most ardent anarchists and reformists alike with indifferent glee, leaving only their hollow shells in its wake. All of which is personified in Saya – formerly, the coldest and baddest of badasses; now, unable to cope with the real world, she’s a burnt-out shell of her former self. Life, Remender is telling us, will mess you up no matter how prepared you think you are.

What do you do when the world has left you behind? When you don’t fit in no matter where you go? When you can’t cope? These are themes that Remender has been mining since day one of Deadly Class. The earliest issues were all about teenage cool and its exhilaration yet ultimate shallowness; the middle years were analogous to reckoning youth with budding adulthood; and now, as “Save Your Generation” slices back and forth between the early ‘90s to the ‘00s, Remender takes a look at life in your ‘20s and realizing how unprepared you actually are. Certain wounds never heal. And just like actual high school, assassin high school leaves scars that never fully heal.

It would be impossible to talk about Deadly Class – as personal a book as it obviously is for Remender – without mentioning the art team of Wes Craig, Lee Loughridge, and letterer Rus Wooton. These three are a dynamic trio that together produce one of the most visually striking comics on the stands. Craig’s pencils have always leaned a bit toward a less-shadowed, more Art Deco Eduardo Risso (no small compliment in and of itself), but this month, it’s Loughridge who absolutely steals the show. Using flat colors in bold, broad swaths, Loughridge paints each page with minimal variation in colors, choosing instead to opt for maximum impact. And it works better than the veteran colorist could possibly have intended: each page portrays Saya’s world in stark extremes, not black and white but rather drab and dulled – a side-effect of her drug use, sure, but also a visual metaphor for the state of her life at this point. If Loughridge hasn’t won an Eisner yet in his storied career, this issue is sure to shoo him into contention. And Rus Wooton – an industry vet of no small stature, either – ties it all together with a delirious tango of lettering brilliance. Deadly Class continues to be one of the best comics on the stands today, and one of the most affecting as well. This is both a love letter to and an excoriation of Rick Remender’s generation, for better or worse – and as a reader, we’re all the former.

Deadly Class #47 is a perfect comic, full of desperation, resignation, generational lies, and - yes - in the end, the faintest whiff of hope. Don't miss out on the latest installment from Image's best read.