Deadpool #1: Being Used For His Body 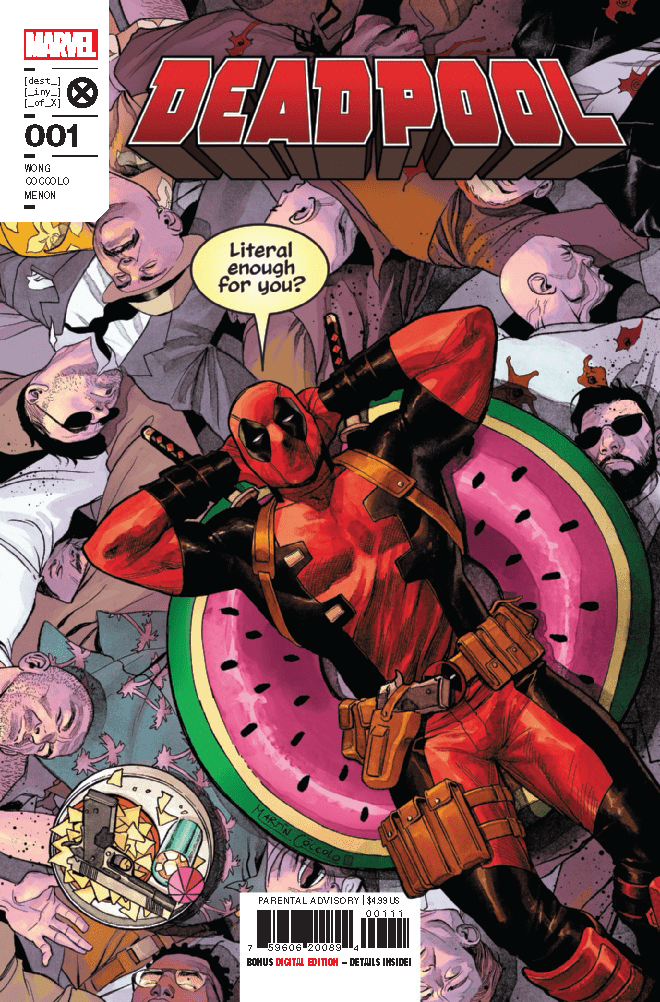 MARVEL’S TOP MERC IS BACK IN BUSINESS! We all know Wade Wilson is one of the top mercenary/assassins in the Marvel Universe, even if he is simultaneously the most annoying one…but he’s pushing to make that recognition official as he auditions for the elite group known as the Atelier. Now, he has 48 hours to kill one of the world’s most famous supervillains. Only problem? He’s been kidnapped, and something…strange…is GROWING INSIDE HIM. Things are going to get gross as writer Alyssa Wong (DOCTOR APHRA, IRON FIST) and artist Martin Coccolo (BANNER OF WAR) take out their pent up aggression on everyone’s pizza-faced, jabber-mouthed, misguided, hate-to-love, love-to-hate fave…Deadpool!

Anytime Deadpool is involved in a story, you know it’s going to be a fun read no matter what. This issue is no different. I will admit that when the first pages of this issue shared that Deadpool is part of the mutant nation of Krakoa and by extension, part of the House of X/Powers of X (HOX POX) X-Men storyline, I was a little worried. That story arc is so large and vast that I was worried I was going to be lost in the backstory and have trouble following what’s been going on.

But to my pleasant surprise, this seems to be a story that stands on its own and does not rely on background knowledge of the current X-Men arc. 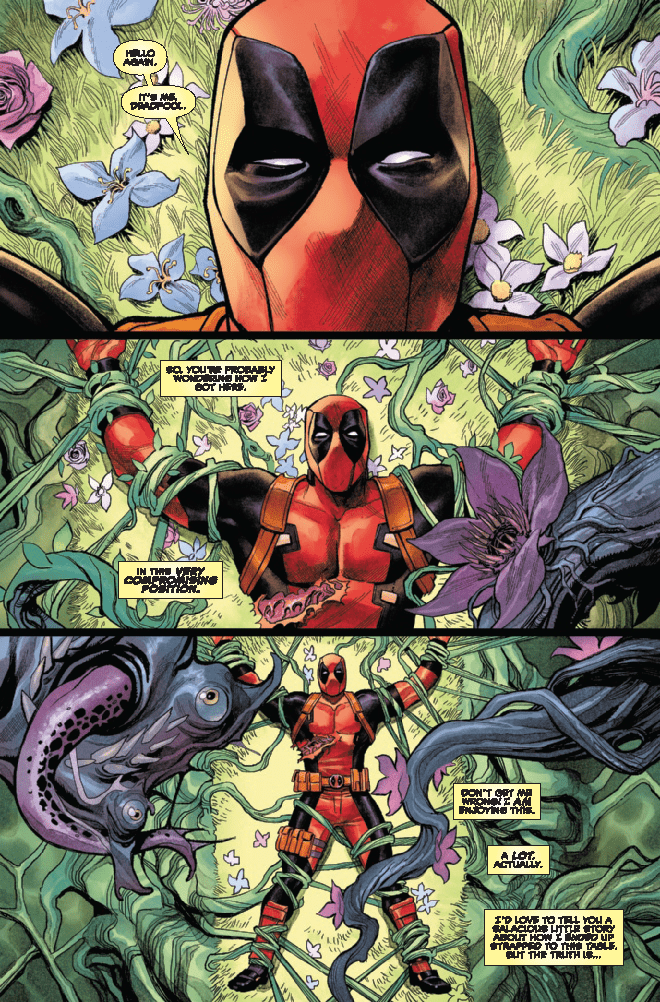 The story is fun, interesting, and funny. Wade Wilson is given 48 hours to assassinate Doc Ock as an audition to join an exclusive group known as The Atelier. Should he fail, he will never have this chance again. It’s unclear why he is wanting to join the group, but he does immediately gain a crush on one of its members, Valentine Vuong. He spends the next 24 hours working on his assassination plan when he’s unexpectedly kidnapped and knocked out by The Harrower (essentially a Marvel version of Poison Ivy that was just introduced into the Marvel Universe last year). She reveals to him that she needs Deadpool’s body in order to create a hybrid Carnage symbiote so she can have one that she can have complete control. And this is just the first 25% of the issue – crazy, right?!?

Wong does a great job of capturing the character of Deadpool in his dialogue while writing out a really interesting story that involves a lot of characters that do not cross paths with one another regularly without making it seem like it’s a dumping ground for the story. Although we don’t know why The Atelier chose Doc Ock yet, it’s clear that more will be revealed in future issues so I’m confident that they will make it all connect by the end of the arc. I’m not sure if there’s any story in Marvel’s history that focused on exploiting Deadpool’s powers and body as a symbiote host (or something like it), but even if there was, this seems like a really cool and exciting concept for a story. 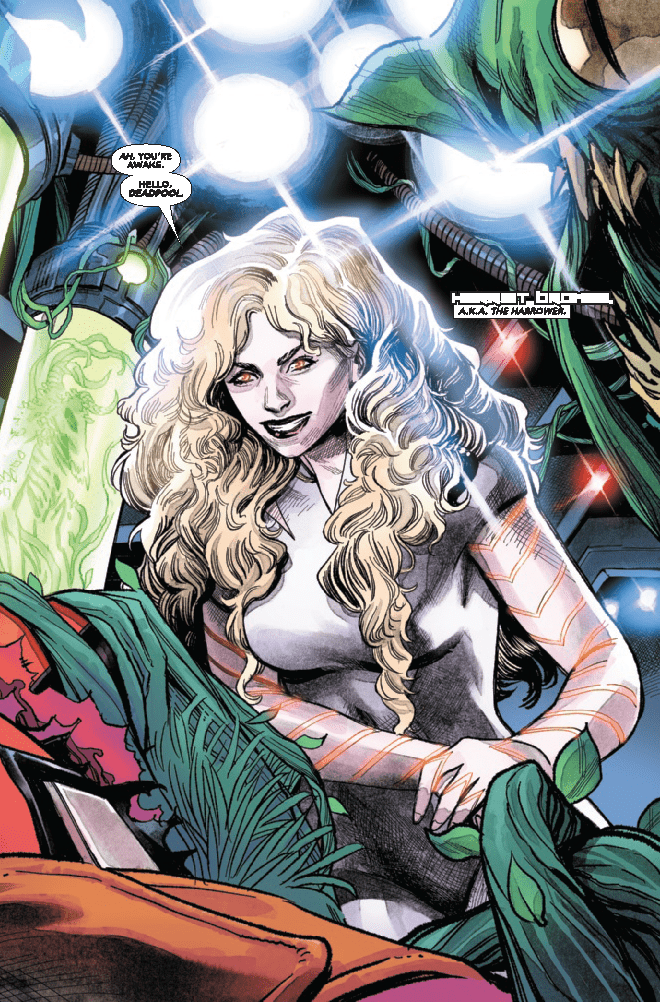 The artwork by Coccolo and Menon was well done. There were enough crisp lines and imagery for you to enjoy the scenes and character details without having it be so specific in details that it felt like there wasn’t any room for imagination for the reader. It definitely fits the style of a Deadpool comic so if you’ve read some other Deadpool comics, you’ll appreciate how this artistic style seems to continue that mental world of Deadpool that you’ve come to love and appreciate in all of his comics.

Because Harrower is a fairly new character in Marvel and this is my first experience with her, I am not sure if her portrayal is accurate or an artistic style that didn’t jive for me necessarily. It seemed like whenever she appeared on the page, her aesthetic and appearance were somewhat inconsistent, and her color scheme for her always seems to be more washed out than the other characters and environment of the panel she was in. That definitely distracted me from the story and not sure if this is something that will be a problem for future issues or if this is living up to the authenticity of the character. 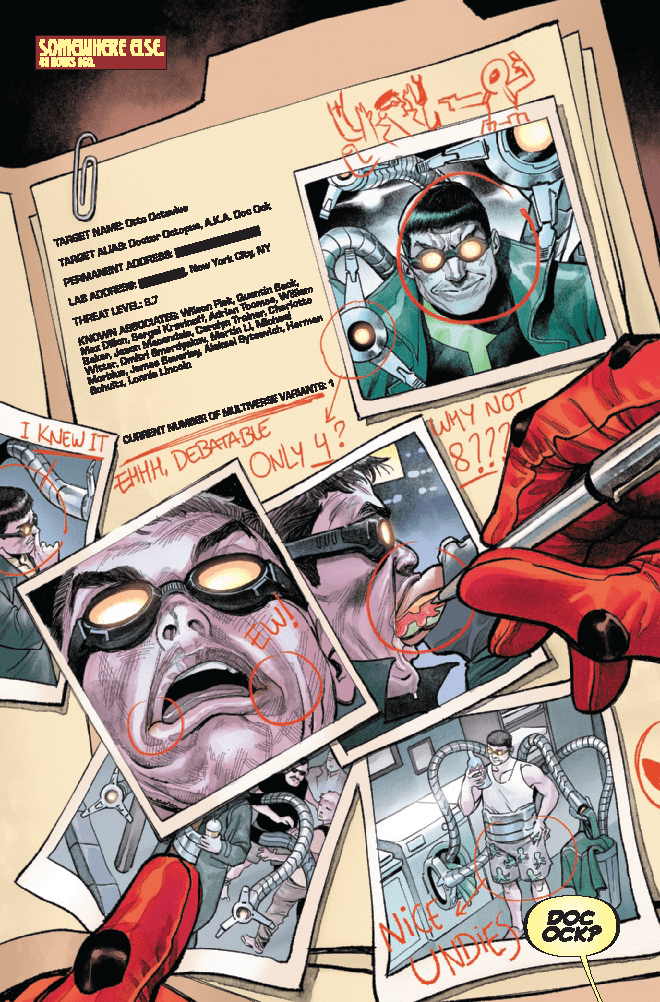 This is a great first issue for a Deadpool story. If you are someone that has always been interested in getting into a Deadpool comic run for the first time, you can't go wrong with this. It captures the character of Wade Wilson well and you don't need to have any previous knowledge of any story to dive in and enjoy this next adventure of the "Merc With A Mouth."

Deadpool #1: Being Used For His Body