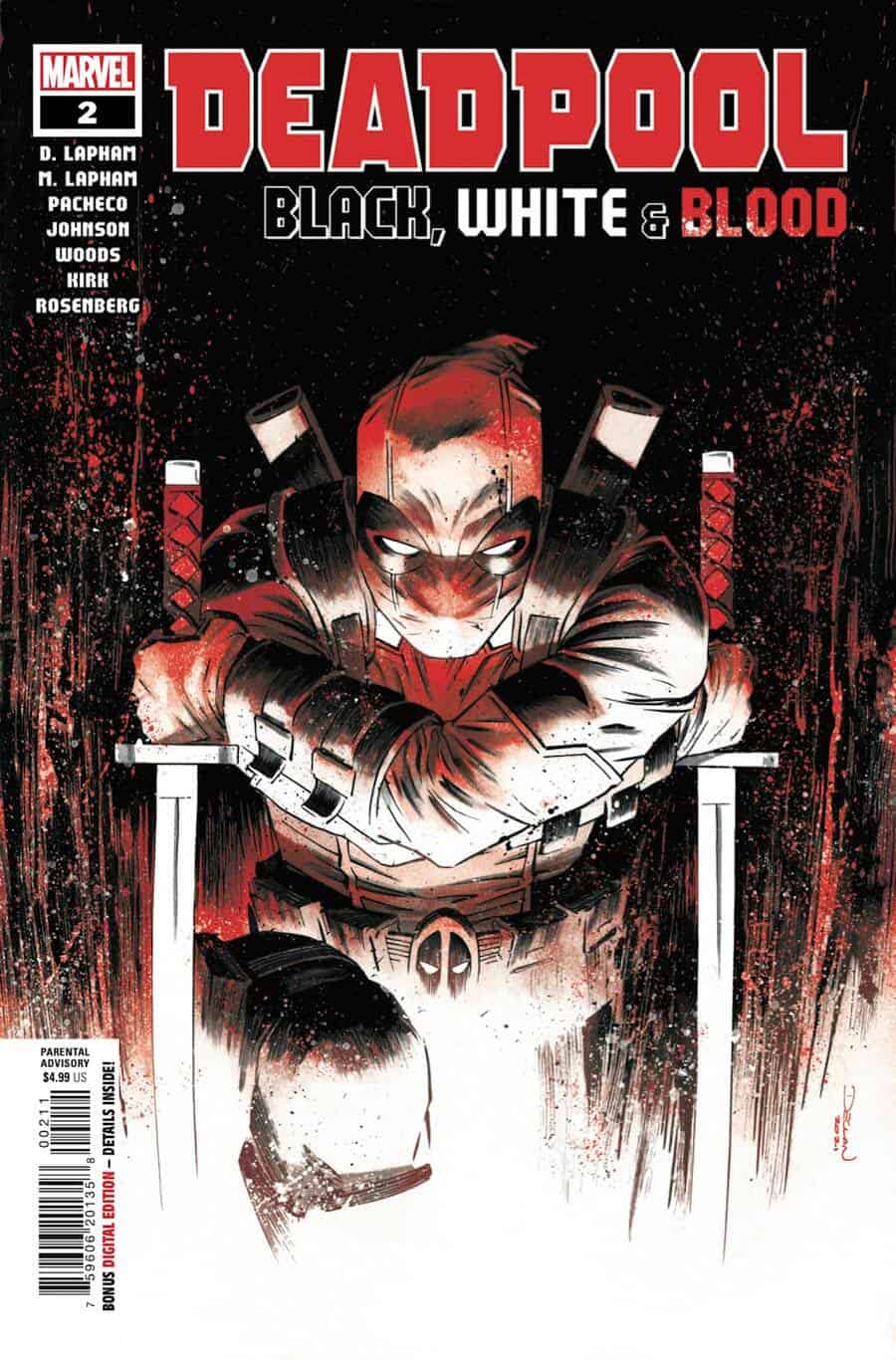 This story featured a not-very-purple Purple Man, a knife through a jaw, something resembling cooking, some crayons, sight gags, explosions, and a little medium-witty banter. There was also just the faintest whiff of sweetness in the mix, just enough to cut the odour of blood. In short it was everything that a reader could want from a Deadpool story.

The art was heavy on the inks and blocky as anything by Miller (thankfully without the racism that comes with that artist) and the limited palette fit the tone perfectly. Indeed the colors, or lack thereof, enabled a joke that made me snort-laugh. I won’t spoil it, but trust me. You’ll find it.

This creative team is one that I’ll be looking out for in the future.

Do you like semiliterate meta-jokes? Vampires? How do you feel about hyperviolence and a guest appearance by Gambit? How would you feel if I stopped asking you literally unanswerable questions and told you that Gambit never wears a shirt?

Literally all of those things appear in this story — up to and including the unanswerable questions. This was a bonkers firecracker skit and I loved every all-too-brief second of it. If Karla Pacheco were given a chance to write this series for real I’d buy five copies of each issue and never regret a single penny.

The art was very sketchy. It was too cartoony and short on details to be really effective, but the high-energy slapstick line work made up for some of the lack in other areas.

What the actual F¥©K, Daniel Warren Johnson? I don’t read €u©|{ing Deadpool stories to cry all over my computer screen.

Punch me right in the face next time. It’ll be easier on my heart.

In all seriousness, this story is something special. Daniel Warren Johnson starts by playing with the usual Writer’s Block meta-jokes, segues into riffing on team-ups and dance contest shakeups before swerving onto a seemingly different track and saying something very real about both the creative process and the importance of superheroes.

I don’t want to give away anything more about this story than I already have, so I’ll just say that if you were ever curious about the process and genesis of storytelling, buy this anthology. I’ve written nine books (poetry and novels) that were published by five different publishers, and it all started when twelve-year-old Bethany fished a battered old comic out of somebody’s recycling. Johnson captured that shocking, revelatory, feeling of finding a new world and sinking into it absolutely brilliantly.

If you’ve ever heard this artist’s name you’ll know what to expect from the art in this segment. It’s breathtaking stuff, rich in fun, mayhem, and feeling. It’s absolutely perfect for the story it’s telling.

This trio of stories reveals the absolute best of Deadpool. I cannot recommend it strongly enough.

This trio of stories reveals the absolute best of Deadpool. I cannot recommend it strongly enough.