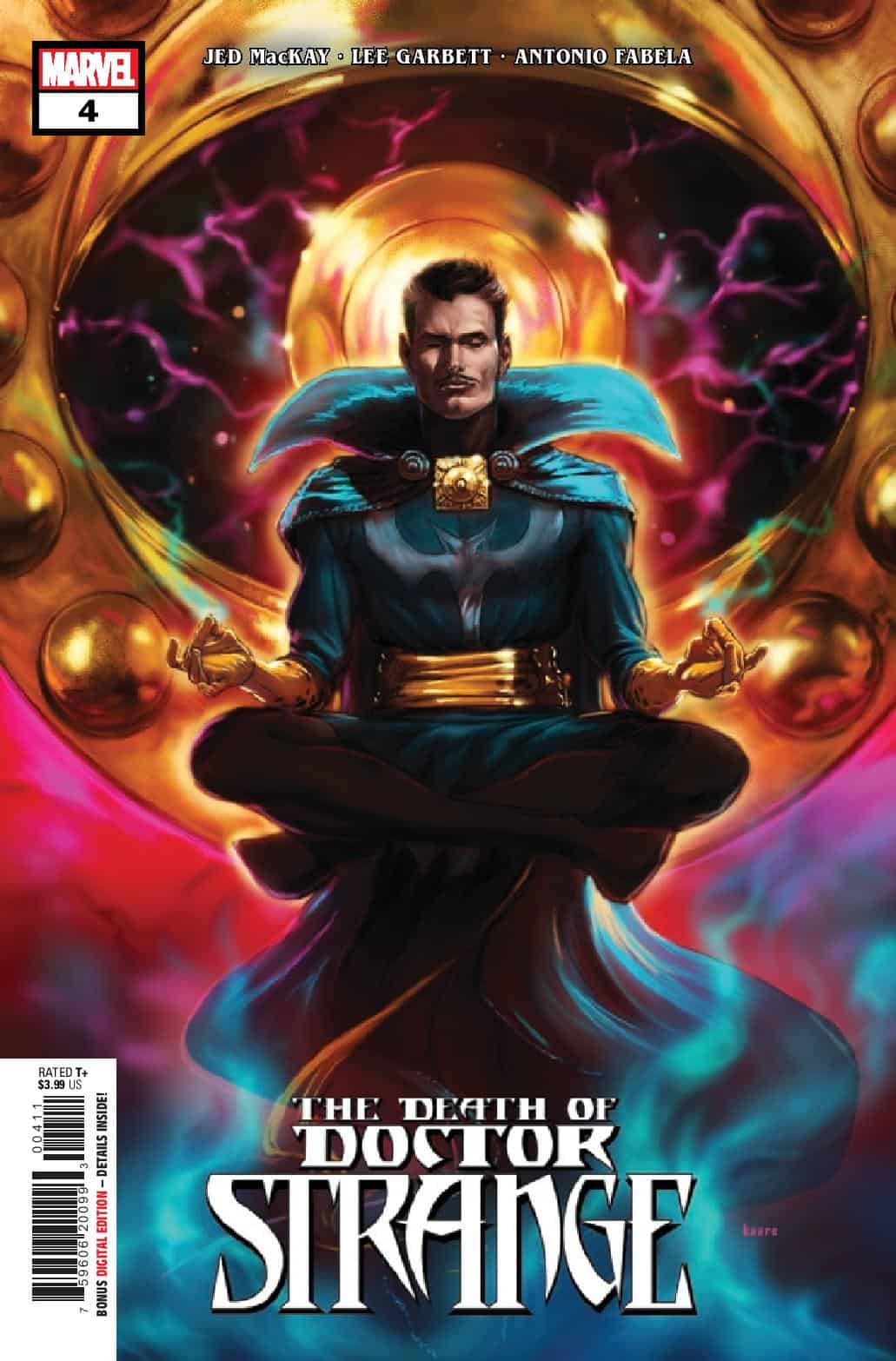 WHO WILL BE THE NEW SORCERER SUPREME? Someone has to stop the giant mystical threat devouring all magic, and it can’t be the Avengers. Or the Fantastic Four. Or the X-Men. It’ll take someone with the greatest skills and command over the mystic arts to save us all. It’ll take the Sorcerer Supreme. But who will that be?!

The mystery of who killed the doc is discovered by the end of this issue, and the culprit is…I’m not going to tell, because that’s not what I do. By now you know that Stephen Strange is going to be replaced in the upcoming new year by the Sorceress Supreme from the Dark Dimension, his paramour, Clea, but his final fate hasn’t exactly been determined because there’s one more issue left to go. Will Jed MacKay and Lee Garbett be able to wow us? Let’s discuss (or better yet, I’ll meander about what happened, what I think will happen, and what I hope will be the final outcome for this miniseries).

With the revelation of the killer is? Meh. I honestly was hoping for something a bit more…grandiose and larger than like to take out the Sorcerer Supreme, but the reveal was rather lackluster. Will that color my opinion of this mini before it’s concluded? No, because Jed MacKay has done some exceptional work that has garnered some very good will in regards to my expectations for his work (if you haven’t read his run on the recently concluded Black Cat series, I strongly recommend it). With one more issue left, plus the reveal of what happened to Strange’s hands, there’s a lot of room for that WOW moment to happen for this mini. So a lot’s going to ride on the next issue’s conclusion.

Lee Garbett continues to wow with his work. While I was rather underwhelmed by the beginning of this series, after further looking at his craftsmanship on the book, and his designs not only for current and past Strange, but also the designs for Clea, Umar, Mordo, the Three Mothers, and the rest of the designs a little bit more every time. It’s weird, and abstract, and something you’d expect from a series surrounding Doctor Strange, but also it’s very much Garbett. His style sings with a project like this, and I’m so glad to see him on this.


MacKay and Garbett have put together a rather enjoyable murder mystery, that has both high and low points, but overall the highlights have made up for the low points. I’m really enjoying Clea’s presence here, and look forward to the upcoming series. One of the highlights of this book has been MacKay’s penchant for injecting humor into everything, and it’s really made it a selling point for the book. Especially with the banter between Strange, Bats, Clea, and Wong. Plus Garbett kills it with every issue, so having him here is just a huge boon for the book.

MacKay and Garbett continue with the mystery of who killed the good doctor, and while there are some things that have been underwhelming, the humor and art has made up for the shortcomings, so I’m eagerly awaiting the ending as well as Clea’s upcoming series.