After a world-wide tour to re-establish Deathstroke and his family in the newly launched “Rebirth” universe, to include run-ins with Batman and Superman, Priest interrupts our regularly scheduled program to bring us breaking news from “Chicago” in this one-off issue. 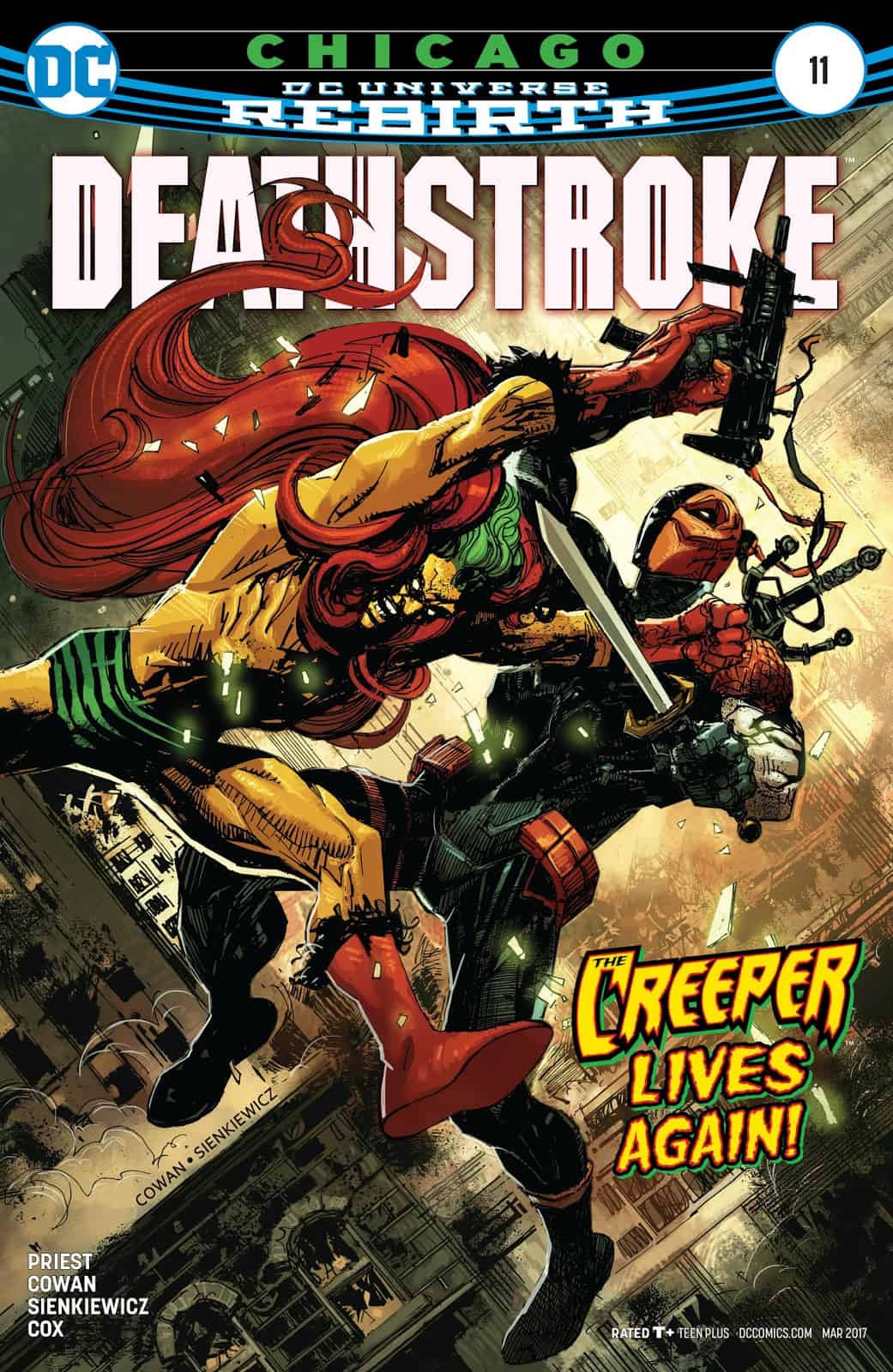 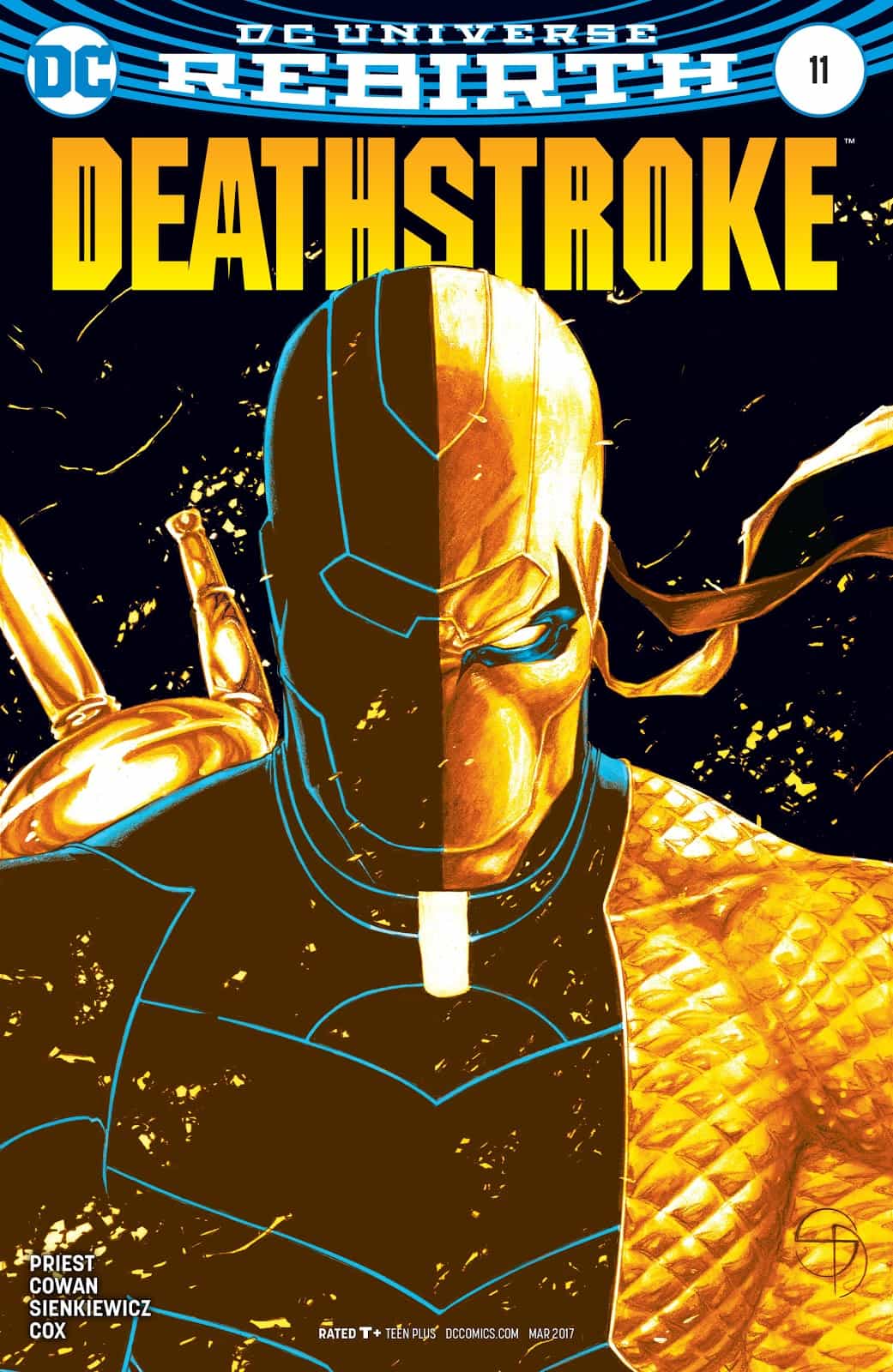 Slade Wilson, aka Deathstroke, is a contract killer of questionable morals, but not entirely without his own ethical compass. Part of the beauty of this issue is its accessibility, as these are the only facts you need coming into it.

This issue opens on journalist Jack Ryder (aka The Creeper) and a Chicago PD detective at the scene of what appears to be the accidental shooting of a 12-year-old child. The story of the shooting, in which an upper class white female corporate secretary breaks down at 1am in a sketchy part of town, is allegedly assaulted by two men, discharges her legally owned handgun and accidentally hits the child rather than the men, merely serves as a device to begin a candid and wide-scope discussion of gun violence in Chicago, and by extension, the United States. As the detective spouts the statistics, Ryder’s concern stays focused on a rumor that a number of mothers of dead children in Chicago pooled enough money together to hire Deathstroke to come to town and clean up the streets. Rumor has it, Deathstroke took the contract and has already killed eighteen gang members associated with child deaths… using no guns.

The next major sequence focuses on the group of moms, starting with putting out the initial contract for Deathstroke, followed by Ryder and a local reverend paying a visit to the mother’s group and hearing their side of the story—a story that proposes that the only solution, the only justice to be found for their dead children, is to fight fire with fire.

Back with Ryder and the detective, the narrative of Deathstroke’s series of contract revenge killings continues. Ryder mentions a similar case in Philadelphia, which appears likely to be what is driving Ryder to investigate this situation. This time, the victims are gang bangers who were going after the moms, leading to Ryder questioning where this contract would end. In a world of cyclical violence, is anybody innocent?

Ryder comes face to face with the secretary responsible for the death of the 12-year-old. We find out that the woman’s boss, already dead, had sent the secretary on a drug run, and the dead child was the drug mule. Deathstroke is on his way to kill her when she attempts to shoot Ryder, which brings out his alter-ego, The Creeper, and leads Deathstroke right to them. After a gratuitous battle between Deathstroke and The Creeper, we discover that the unassuming reverend, who has shown up all over the city, is posing as Deathstroke and executing a series of vengeance killings just as he had previously done in Philly.

The epilogue. The reverend is dead on a pew in a church, killed by the real Deathstroke for “diluting the brand.” The story closes with Deathstroke telling Ryder that he would not have taken the contract, even if the money was right, illustrating Priest’s continuing pattern of what Deathstroke’s ethical composition may be. When asked by Ryder “What is the solution to Chicago’s gun violence…?”, Wilson simply replies, “Better aim.”

This issue features a candid, multi-perspective discussion on gun violence while remaining predominantly objective in its presentation of information. Each character in the story has a role to play in acting out the debate, as do the various locations across Chicago (Austin, Pullman, New City, River North, and Humboldt Park).

The Detective: He is responsible for relaying the statistics (“4200 shootings here in Chicago last year. Over 700 homicides. The city is helpless to stop it.”; “In 2010, there were 11,000 gun homicides in the United States, Mr. Ryder. In Japan, there were eleven.”). He questions the city for its press to get a handle on smoking regulations in the wake of the tragic Sandy Hook and Pulse Nightclub shootings as he stands over the body of a 12-year-old. Later in the story, the detective emerges once again to discuss the cycle of violence, implying the problem of cyclical violence does not lie in the object used for killing, but in the society that creates scenarios where killing is an inevitability. He cites the Japanese conquest of Okinawa, where the banning of guns resulted in the Okinawan people inventing “some of the deadliest forms of unarmed combat known to man. Legislating against objects is a waste of time, Mr. Ryder.”

The Moms: Besides being the narrative catalyst for the story, the Moms introduce a number of crucial elements to the debate. All discussion of race and poverty occurs in their sequence. All of Reverend Deathstroke’s victims were black, and Ryder points out that a white man killing black men is what these mothers have signed up. The lead mother responds: “My baby was black. The gang who shot her was black. If a white cop gunned down her killer, I’d bake him a pie.” This sequence not only evokes the discussion of black on black crime but also the haze surrounding the ethics of police shootings. Later in the sequence, Ryder questions the introduction of more guns as a potential solution, showing two separate armed mothers. The women introduce two important elements to the debate. First, the notion that the secretary was legally armed, although perhaps poorly trained (as implied by Ryder in the opening sequence. Second, one mother states, “White privilege, Mr. Ryder. Why do soccer moms in Tucson have a right to defend their kids but we don’t?” This second factor points to a larger, systemic problem existing in public perception and the National justice system, but I’ll leave it to you, dear reader, to extrapolate further.

Ryder: Jack Ryder serves as a stand-in for the media. He asks all the questions as moves about the Chicago landscape, initiating each talking point in the narrative. Ryder’s uncontrollable alter-ego, The Creeper, deepens this avatar, suggesting that even the most well-intentioned and objective journalists still possess capacity to lose control of the narrative.

The Reverend: The Reverend is used to illustrate several key points in the discussion. He serves as the analog for vigilante justice—the spirit of taking control of our own communities. He looks inward at culture and the potential for hero worship in black communities to turn awry (“This is all our kids see, all they hear— ‘thug’ life. Guns.”). Finally, he could be read as a counterpoint to the idea of weapon bans being the solution to violence, as a man who has killed at least 32 armed men without using a gun. This point also speaks to the mothers using the “guns in the hands of the good guys” argument, as simply having a gun doesn’t necessarily equate to being “safe” or able to act.

The Secretary: Her role in the narrative is small but crucial. In the initial sequence, the detective states, “She defends herself. Throws shots from a .380 she has a concealed permit for. But, see, she’s had almost no training with the thing and she’s panicking, so she can’t hit the side of a barn.” This legally obtained, legally carried weapon is still extremely dangerous without proper training that perhaps should be a part of the legal acquisition process. It is also noteworthy to see that she is still walking free towards the end of the story, which could bring into question notions of economic and/or white privilege, depending on the reader.

Deathstroke: I find Deathstroke’s “solution” to gun violence to be an intriguing statement, pregnant with multiple possibilities for meaning. “Aim better.” Is this sentiment a “kill ‘em all” mentality? Is he simply implying that if you hit the right target, then the violence has done its job flawlessly? Or is it more philosophical? What are we aiming better? Perhaps he means to evoke our own sense of moral compass? That, dear reader, is the beauty of the medium. All possibilities for interpretation exist, and it is up to us to decipher them according to our own understanding of the world.

Final Thought: Priest’s run on Deathstroke is the most under-rated series of comics I can remember since… his run on The Crew. This single issue, a non-sequitur from the current “Four Rooms” arc, serves as a shining example of the relationship we, as a society, can have with our comics superheroes.