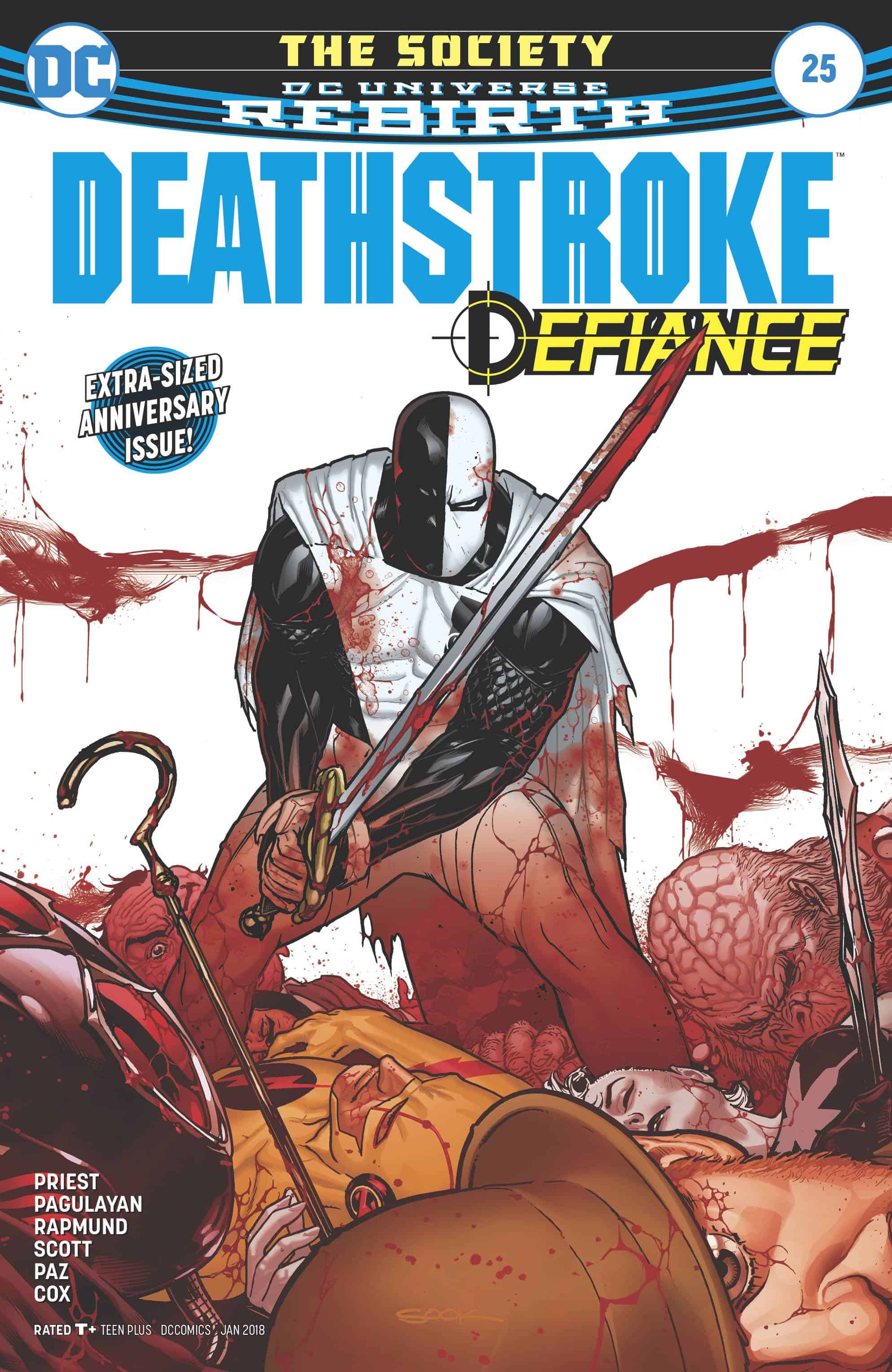 Deathstroke betrayed a fellow assassin, stole his gun, cut off his arm and violated the Secret Society of Super Villains’ code of conduct! Kidnapped by Reverse-Flash and put on trial for his crimes, Slade Wilson must rely on his court-appointed defense attorney—The Riddler! Is Deathstroke still evil? And why do some of the world’s worst villains think they really aren’t evil?

Slade Wilson has turned over a new leaf: Deathstroke has renounced being an assassin and has recruited metahuman teens to be “heroes for hire” (no good deed goes unpaid) called Defiance.  But after stopping another assassin named Deadline, stealing his rifle and accidentally cutting off his hand with his suit’s force field, Slade has been kidnapped by Reverse-Flash and taken to the Secret Society of Super-Villains for trial.

Flashback to Kentucky where a teenage Slade Wilson has been punished by his father who has chained him up inside a tool shed in the middle of winter.  When Slade’s adult friend Wintergreen shows up to free him and they look up to see Slade’s son Jericho flying overhead, that’s when Slade realizes he’s hallucinating.

Enter the Riddler who tells Slade a couple riddles and then informs him that a) he’s pumped full of drain cleaner to keep his healing factor in check and b) his trial is about to begin.  Vandal Savage is the unofficial foreman of the jury which includes Killer Frost, Hector Hammond, Ultra-Humanite, Reverse-Flash and Black Manta.  Vandal welcomes the assassin Deadline who then introduces the Nightwing villain, Raptor, as a character witness.  We get another flashback which recounts Slade’s secret origin (told in sections off-and-on throughout the book) before Riddler states he is Slade’s “defense” and that Slade’s memories show a record of evil.  But he adds, “What is ‘evil?’ How do we define ‘evil?’”

Deadline snaps and barks, “Here’s how!” Then he alleges that Deathstroke interrupted his hit, stole his Infinity Rifle and destroyed his right hand.  Riddler rebuts that the issue is pride and Vandal concurs saying that not only Slade but also Lex Luthor have turned to heroism.  Is it a sickness like a virus?  Riddler goes back to recounting how Slade Wilson became Deathstroke, but is interrupted this time by Raptor who states this seems pointless, he’s got business to attend to and leaves.

Deadline scoffs that Raptor is right which is when Killer Frost asks if the Society has similar doubts about her since she joined the JLA—and if she’s going to be allowed to live if they aren’t sure if she’s really a villain or now a hero.  Riddler dismisses her concern about labels by saying they don’t use them.  He then illustrates this by retelling how Slade lied to everyone about the powers he gained and secretly began black ops missions for hire…which was morally questionable, but maybe not evil. However, once his son Jericho got his throat cut by one of his enemies and his wife shot out Slade’s eye, “That was the day evil was given life.”

Suddenly, Deathstroke’s Ikon suit has recharged, he breaks loose and kills everyone in the room. But it’s just another Society-induced hallucination.  Only this time, the Riddler claims that Deathstroke’s dream about killing them all proves beyond a reasonable doubt that Slade is truly evil.  This line of reasoning provokes a fascinating debate among all the members of the Secret Society present… 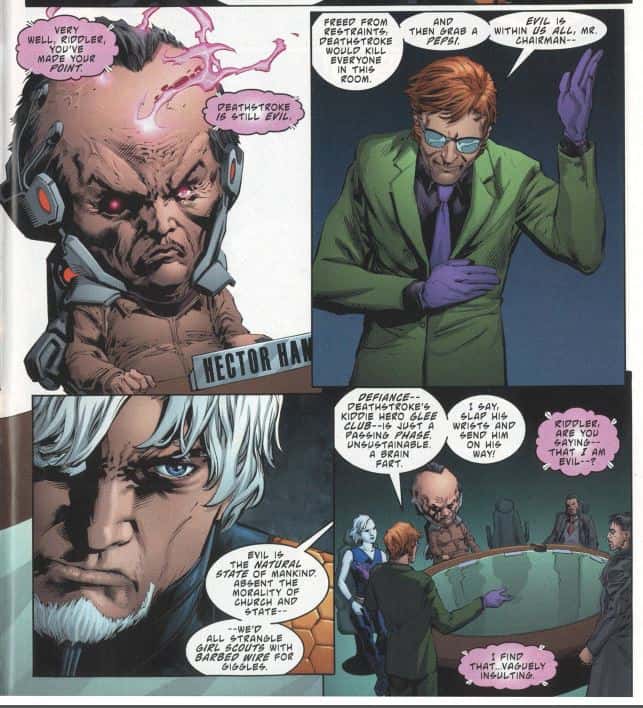 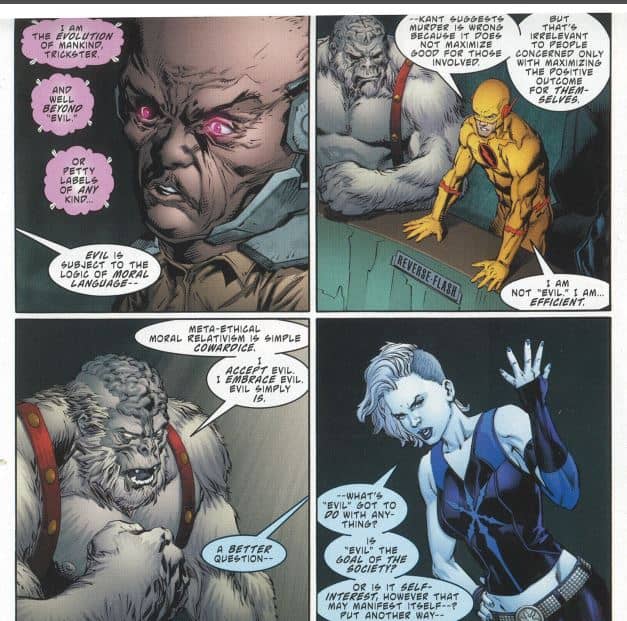 Hector Hammond is insulted at being called evil because evolution puts him “well beyond evil or petty labels of any kind.” Reverse-Flash also believes he’s not evil either; he’s just “efficient.”  Ultra-Humanite insists that this “moral relativism is simple cowardice. I accept evil. I embrace evil.” And Killer Frost flat-out asks if they’re all going to kill her for joining the JLA. To which Black Manta quips they’ll just give her some books to read.

That’s when the ceiling comes crashing down and Slade’s old frenemy Dr. Ikon (the man who created his Ikon battle suit) claims Deathstroke as his and leaps into the sky. Deadline is outraged and shouts at Vandal to go after him and kill Slade.  Nonplussed, Vandal rebuts that death is off the table, but they will make Deathstroke return Deadline’s Infinity Rifle and pay $1.2 million in reparations. Court adjourned.

Back in the Bronx, the members of Defiance are baffled by Deathstroke’s disappearance.  Terra, however, thinks he’s just vanished to put them through another dumb test…while Dr. Ikon stands on a skyscraper holding Slade’s limp body in the air as if about to drop him.

What was set up as the Secret Society of Super-Villains putting one of their own on trial was in fact an incisive, witty and enlightening examination of the very definition of evil.

Christopher Priest’s writing on Deathstroke with its frequent flashbacks and time jumps between the past and present over 25 issues is not a quick, light read.  Echoing many of the storytelling techniques he implemented during his now-classic 5 year run on Black Panther in the late 90’s, Priest requires that readers pay close attention to who is saying what to whom and how they say it and when and also in what context.  On more than one occasion, I’ve had to go back and re-read part of an issue to make sure I understood what happened and what it meant.

There’s no getting around it:  Priest likes unconventional narratives and loves playing with dialogue by framing it within subtle contexts.

The switching back-and-forth between past and present (multiple scenes recapping Slade’s origin intercut with his trial) and the cutting retorts and clever quips with layers of meaning (Riddler’s very pointed riddles at key points or the interaction between Slade and his father or Slade and Wintergreen) demand that readers pay close attention to the script.  Priest’s Deathstroke isn’t just a two-dimensional slugfest between super-villains or with superheroes. This series is an in-depth analysis of a DC character labeled a villain who is actually somewhere in the middle of the two extremes of good and evil.  Is he what in Dungeons & Dragons terminology some would call “Lawful Evil?” “Chaotic Neutral?” Or some other category altogether?

But Priest’s investigation of Slade Wilson’s complex ethics and intrinsic nature does not stop there. He widens his shots to encompass every supporting character both large and small.  Every issue we are treated to scenes that demonstrate the reactions of everyone from Adeline Kane to Ravager to Jericho to Wintergreen to Terra to Kid Flash as they interact with Deathstroke and how the stress of those situations reveals their moral centers and inner selves.

This ongoing monthly book isn’t just 20 pages of black-and-white good guys and bad guys punching each other out, fighting over a meaningless MacGuffin and screaming melodramatic threats dragged down by line after line of redundant exposition.  No, what Priest looks to be attempting with Deathstroke is an exploration of morality with many shades of gray and taking readers on a tour of all the different sides of decades-old characters while not skimping on the fisticuffs or the special effects.

One of the most pragmatic ways they’ve engineered this ride is by utilizing artists who may not be big names, but who are in fact some of the strongest draftsmen in comics with sharp storytelling skills.  Artists like Joe Bennett, Carlo Pagulayan, Denys Cowan, Diogenes Neves and others aren’t marquee superstars known by one word names like Perez, Byrne, Coipel or MacNiven. But they are experienced artists who have proven talent with slick panel-to-panel narratives and intuitive knowledge of how to block and stage scenes. Their concise and clear storytelling coupled with Priest’s ingenious wordplay, sophisticated characterization and unpredictable plots makes for one of the most compelling open-ended sagas in comics today.

The art is also enhanced in every issue by the polished and robust colors of the gifted Jeromy Cox.

The creative team on Deathstroke may be flying under the radar with the media and their book may not be at the top of Diamond’s sales to retailers every month. But given how bold, original and dynamic their book is, it has certainly earned every fan it’s got and every issue it’s sold. They also deserve more success and a wider audience.

Final Thought:  Deathstroke is one of the top ten books in comics shops right now. Priest is a superb writer working at the top of his game. Every artist he works with is delivering clean, precise art that tells the story in an engrossing manner.

Any book where the creators produce a story with A-list villains debating if they’re evolved, evil, efficient, et cetera while the protagonist manages to be active in the plot despite chaining him up the whole time and it never gets boring…well, that is how you make a good story great and classic characters ever more captivating.