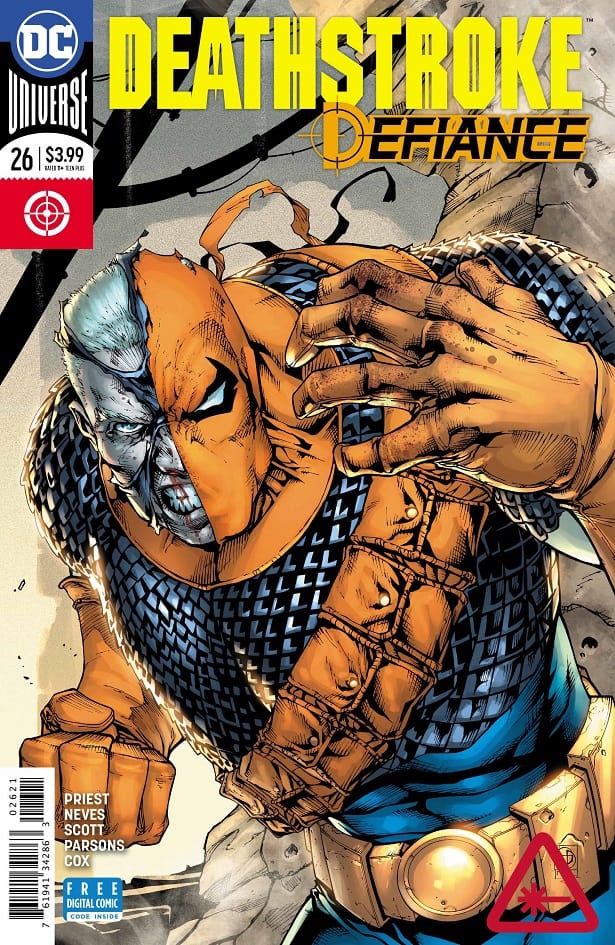 Finally convinced that their leader is missing, Team Defiance begins the search for Deathstroke only to discover his situation is even more dire than expected. Meanwhile, Deathstroke—after being kidnapped by the Secret Society of Super-Villains—finds his past catching up with him when his former friend and ally Dr. Ikon confronts the repentant killer while repressing his own uncontrollable rage.

David Isherwood AKA Dr. Ikon (the man who built Deathstroke’s battle suit) broke into the Secret Society of Super-Villains and kidnapped Deathstroke in the middle of this trial for betraying his code of conduct as a villain.  Deathstroke’s team of teen heroes, Defiance, is split over whether he’s bailed on them or if one of his many enemies has finally caught or even killed him.

At Defiance headquarters in the Bronx, Terra argues that either Slade is dead or whoever caught him is going to be dead soon.  Or his disappearance is just him pretending he’s been captured in order to test Defiance.  Tanya AKA Power Girl finds traces of energy that may be from Slade’s captor.  Rose wants to use this information somehow to track him down, but Adeline Kane (Slade’s ex-wife) agrees with Terra: don’t worry about him and go get onto their next mission in New Orleans.  Jericho agrees with his mother that they should go to New Orleans.

As they prepare to take off in their jet, Kid Flash announces that Terra has left.

We cut to a full page of a Hulked-out Dr. Ikon fantasizing about killing Deathstroke.  But he is interrupted by a priest and we see that Ikon is sitting inside a church… 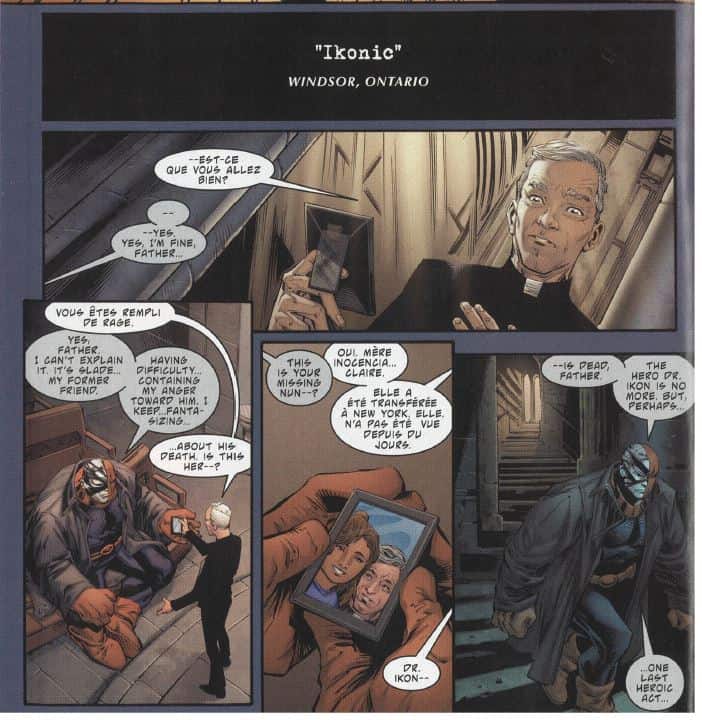 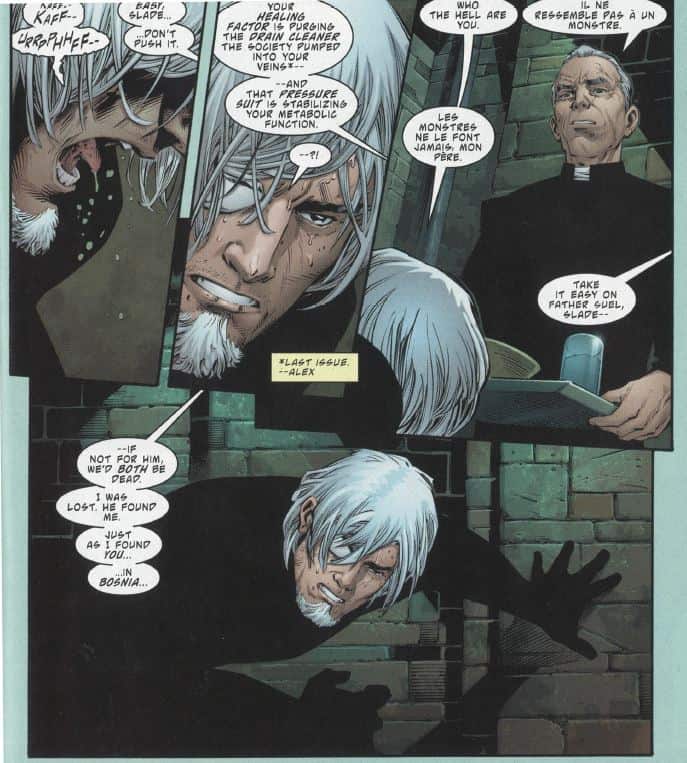 Like Greg Rucka’s Lazarus, we get multiple lines of dialogue in a foreign language. Usually, this doesn’t throw me, but I feel like I need to have Google translate panels for me here because I might be missing important information.  And then there is the matter of Father Suel being a character who is also in the next issue.  This won’t be the last time I felt more than a bit lost in this issue.

A series of flashbacks to previous issues in the series is accompanied by exposition from Ikon.  Slade suddenly recognizes Ikon as his old friend David Isherwood who built his battle suit.  Ikon makes a sarcastic comment about how clueless the brilliant Deathstroke can be in hurting those closest to him and then orders Slade to follow him.

Under Jericho’s leadership, Defiance has followed the traces of energy to the Secret Society’s HQ. Kid Flash can tell a speedster was there, but mistakes the clues for being his father, Reverse-Flash, instead of who it really was: Professor Zoom.  That’s when Terra pops out of the shadows saying she can track speedsters by seismic disturbances in the earth.  She says it looks like Slade was here, but that doesn’t mean he’s in danger.  Kid Flash asks what her problem is with Slade. She answers, “Let’s just say Slade and I have…a little history.”

We cut to yet another flashback (I lost count of how many are in this issue so far).  In this one, we see Ikon AKA David Isherwood recounting how he gave Joseph Wilson his codename of Jericho. 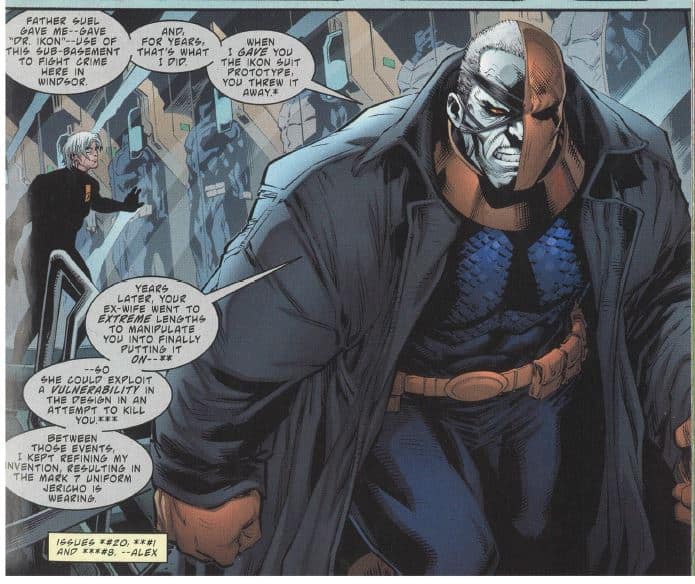 Here we run into multiple problems.  First off, there are the half-a-dozen word balloons of exposition.  Yes, it details their history together.  But referencing that also required text boxes citing 3 different back issues.  Notice something?  The asterisks are off.  The 1st asterisk (a single) doesn’t connect to any of the back issues listed.  Then there are 3 more sets of asterisks, but only 2 more lines of dialogue connecting to them.  And where is the line connecting to the set of 4 asterisks?

Your guess is as good as mine.  Which only makes all of that exposition more confusing than it already is.

Ikon tells Slade he created a new, updated version of the Ikon battle suit which Ikon now wears to control his outbursts of rage.  Slade asks for his old suit, but Ikon tells him he destroyed it and can’t rebuild it because his Hulked-out hands make working on micro-circuitry impossible.  Then he announces he found new religious faith which prevents him from killing Slade. Slade says he’s found the same faith and will never kill again…but Ikon does not believe him. And he intends to make sure Slade never kills again.

Back at the Society’s HQ, Terra tells her teammates that local junkies saw Slade kidnapped by a monster with a Canadian accent.  Kid Flash asks if maybe they should go to New Orleans for the crisis Adeline said they needed to handle, but Jericho informs him that she made that up; there’s nothing happening in New Orleans.

We go back to Ikon recounting another flashback to Slade about how Ikon had an affair with Jericho and when he threatened to tell Slade, Jericho shoved him off of a skyscraper.  This leads to an odd part where Slade says Jericho would never kill and Ikon agrees with him.  Which is a real shocker given that we were just reminded that Jericho shoved Ikon off the building where he fell dozens of stories and barely survived. (If that’s not attempted murder to them, I’m sure any District Attorney could help clarify it.)

Ikon explains that Jericho tried to save him by getting Slade’s doctor to synthesize a virus based on Slade’s DNA which gave him a healing factor, superhuman strength and bouts of Hulk-like rage.  He also adds that the reason Slade is no longer blind is because Slade’s doctor stole one of Ikon’s eyes while he was still in a coma and gave it to Slade.  Slade says fine, they’re even and now he’ll take his leave.

Ikon then informs him that he wants Slade to spend time learning from Father Suel, the priest who’s been teaching him.  As he leaves to search for Suel’s missing nun, Claire, he adds that a transmitter that inflicts pain has been surgically attached to Slade’s spine. Then he shocks Slade and warns him that he’s not going anywhere.  To keep Slade company while he’s away, Ikon has created a hologram of the Wintergreen A.I. from the Ikon suit.

Back at Secret Society HQ, Jericho asks Terra if the Canadian monster was dressed in a similar suit to the one Jericho wears. Terra says yes and Jericho orders them all to board the jet because he knows Ikon kidnapped Slade.  He radios Adeline to tell them where Defiance is going and she is furious.  The real Wintergreen asks her why they didn’t go to New Orleans and Adeline confesses she made the New Orleans mission up because she didn’t want them to save Slade who she thinks has ruined her plans for Defiance.

We close with the New Super-Man from China showing up to bring Deathstroke to trial in his country.

This was not your typical issue of Priest’s Deathstroke.

I love this series and make no bones about it:  the storylines are complicated with many flashbacks and lots of non-linear storytelling.  Sometimes I will go back and read an issue a second time just to see what I missed or may have overlooked.

But this issue was damn confusing.

All the flashbacks and, bizarrely, multiple panels that were literal recreations of scenes already depicted in previous issues were so numerous I lost count.  I’ve read this issue twice and there are still some parts which were hard for me to follow.  Having multiple lines of dialogue in French didn’t help either.

All the back history on the Ikon suit was especially problematic.  All that information could have been told with less detail in fewer panels.  Worse were the 9 text boxes referencing multiple back issues of both Deathstroke and Teen Titans, including sets of asterisks that didn’t match lines of dialogue they were attached to.

Priest is one of the smartest writers working in comics.  His grasp of narrative structure and complex plotting is superb.  But even for a hardcore, old school fan like me, this issue’s script was so full of flashbacks, editorial text boxes referencing multiple back issues and page after page of expository dialogue that I got lost more than once.  The overload of info dumps was boring and killed the story’s momentum.

Normally, I’m a fan of Diogenes Neves who is so underrated as an artist that it’s criminal.  But his pencils in this issue looked rushed.

Then there was Adeline’s plan to make up a story about a crisis in New Orleans to stop Defiance from trying to rescue Deathstroke.  Pardon me, but what exactly what Adeline’s plan for when Defiance got to New Orleans and nothing was happening there?  Why wouldn’t Jericho have then told them “Sorry, guys, Mom lied—now let’s go save Deathstroke!”?  Adeline is an Army veteran and a government agent. I think she would’ve been smart enough to realize that her plan wasn’t going to work.  Either that or Priest’s plot required her to be a moron without any explanation of the painfully obvious plothole there.

The backstory shedding light on Slade and Isherwood’s relationship was useful in terms of characterization.  The problem is, all those flashbacks combined with exposition, text boxes and info dumps dragged the plot to a halt at several points.  The story was a collage of too many talking heads and made more confusing by multiple time changes.

Final Thought:  Priest’s Deathstroke remains one of the best-written comic books from any publisher.  But unfortunately, Priest’s love affair with complex narrative and non-linear storytelling hurt the flow of this issue’s plot.  It felt like he threw everything but the kitchen sink into this script.  The heavier-than-normal (for Deathstroke) amounts of exposition and flashbacks made the script a real chore to plow through.

Add in less-than-stellar art from Neves and this is one of the less enjoyable issues of their run. Still, the characters are complex and interesting.  The jokes were witty.  Even a weaker-than-usual issue of Deathstroke is still better than most books out right now.