Father and son feud when Jericho flies to save Deathstroke from Jericho’s ex—the resurrected Dr. Ikon! Meanwhile, Terra is tricked into an ambush by the Forgotten, deadly leader of the White Lotus!  Plus: culture clash as New Super-Man demands Adeline and Wintergreen hand over Deathstroke! 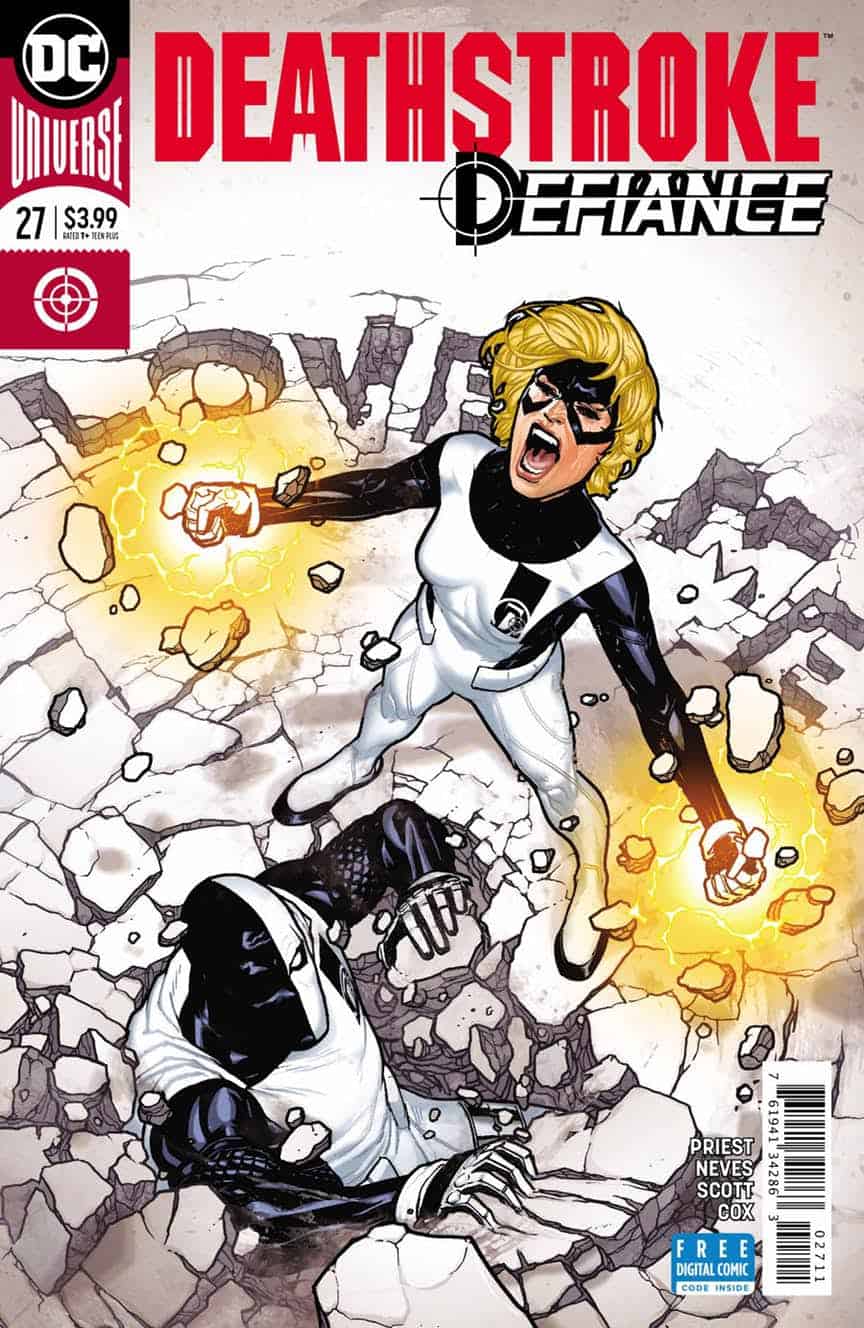 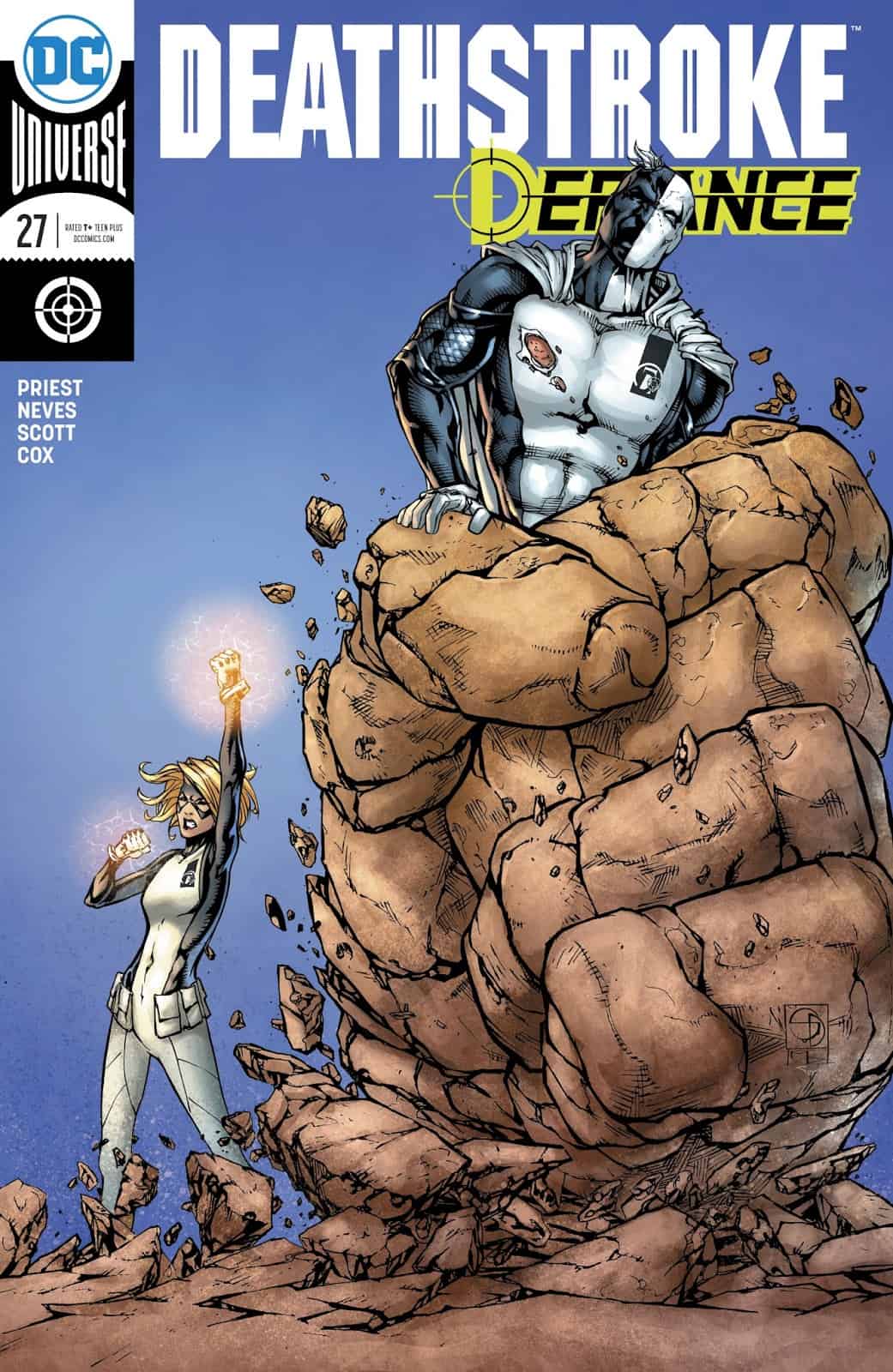 Jericho figures out Dr. Ikon is alive and holds Slade Wilson AKA Deathstroke captive so he flies to Canada to rescue him.  Meanwhile, Terra is unconcerned with their fearless leader’s whereabouts so she’s out and about and up to no good.  And Kong Kenan AKA New Super-Man from China has shown up at Defiance HQ with his country’s Attorney General to arrest Deathstroke.

We open with a flashback set in the fictional country of Markovia.  A member of the royal family’s household staff wakes up a pre-teen Tara Markov AKA Terra to spirit her out of the castle.  Someone is coming to kill Tara because she’s the child of the king’s mistress, unlike her half-brother Brion.  But the staff member is shot outside in the snow leaving Tara to fend by herself.

The next flashback is Tara at 16 dancing at a concert or rave.  Slade approaches her and she asks him if he’s looking for a date.  He says she knows what he wants and that she’ll do.  She shows a small sample of her powers and says yes, but only if the price is right.

This is followed by Priest retconning a notorious scene from the classic New Teen Titans’ story, “The Judas Contract” … 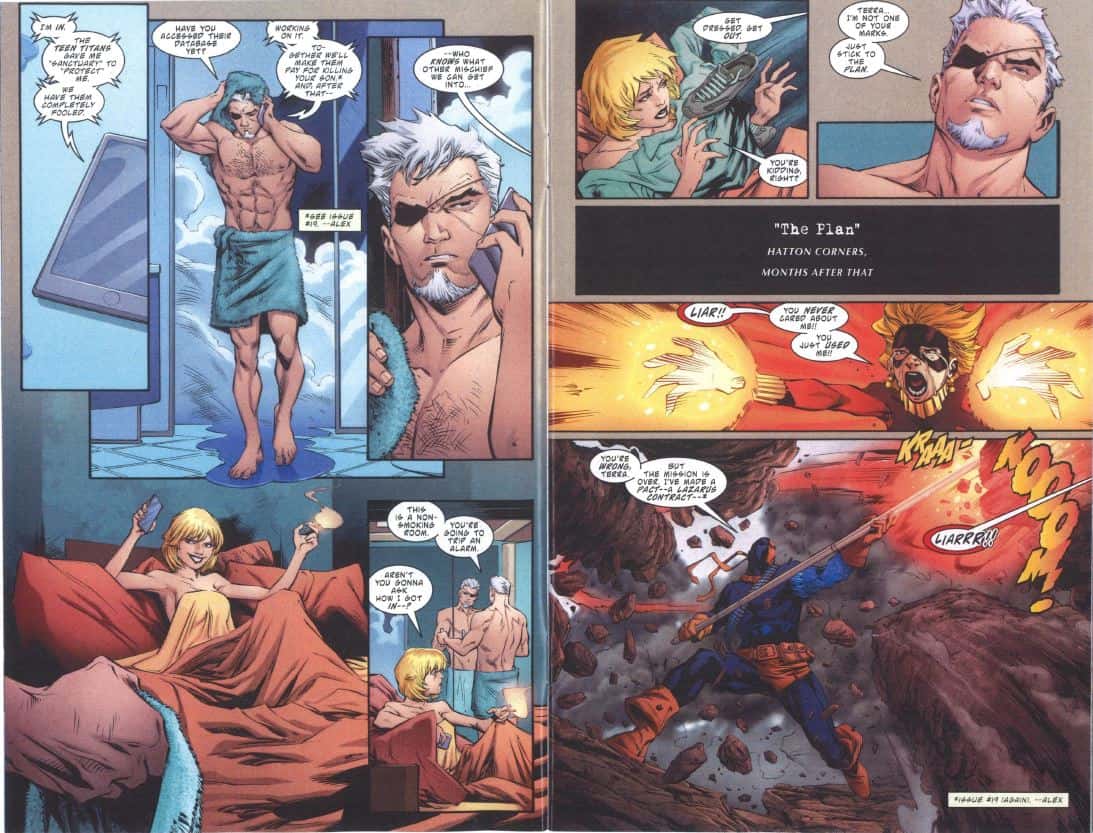 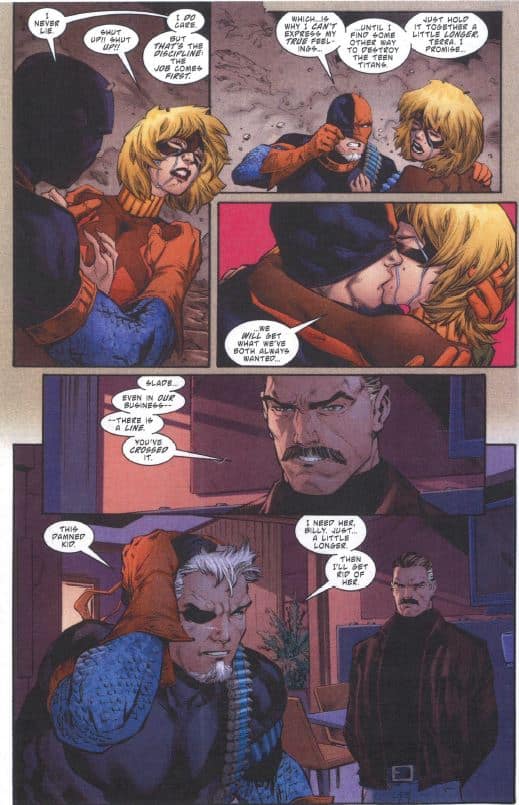 Some old school fans aren’t going to accept these changes to DC continuity.  But as a fan myself, I think it’s a shrewd and thoughtful update.  That scene Marv Wolfman and George Perez wrote in 1983 implying Deathstroke engaged in statutory rape of Terra may have made him seem a greater villain.  However, it was unnecessary and perverse.  Following recent allegations against Harvey Weinstein and now Bryan Singer, such depictions seem more appealing to a seedier minority of readers who get off on the idea of an older man having sex with an underage girl.

I’m grateful to Priest for undoing that and making it clear that superhero statutory rape is no longer “classic” Titans history.  Good riddance—and frankly, having Slade emotionally manipulate Terra into thinking he wanted or loved her reads smarter.  It attests to his reputation as a Machiavellian assassin without hinting at scenes involving adults having sex with minors.  The innuendo of a grown man screwing a teenage girl in “The Judas Contract” was ultimately done for shock value; it didn’t elevate it into mature storytelling.

We jump to modern time and a scene of Terra on a subway getting hit on by a fellow student from her high school.  Priest has real fun as Terra plays off the boys flirting about knowing her from literature class and instead says she knows him from chemistry—then lists all the metals and rocks she could pull out of his body with her powers.  The boy is clueless to her subtle threats to his life but gets cut off by Rose Wilson AKA Ravager who tells him to get lost.  She grills Terra about her missing sword.  Terra asks her why she didn’t go with Jericho to Canada and Rose replies he wanted to go alone.

We move to Deathstroke arguing with Father Suel in the Canadian church where Doctor Ikon has him captive.  Suel warns Slade he’s slipping away from his newfound spiritual path and backsliding to his evil ways.  Suel concludes that this behavior will endanger both him and his family.

Meanwhile back in NYC at a Bronx police station, a redheaded warrior called Willow chokes Benny to get information on the whereabouts of Sister Claire, the nun from Father Suel’s church that Ikon is trying to rescue.  “Willow” speaks to him in Hmong and Benny says he’s Chinese, not Hmong so he can’t understand her.  But he tells her that the leader of the White Lotus clan, The Forgotten, can be found at the Mandarin Oriental Hotel so she lets him go and heads there. 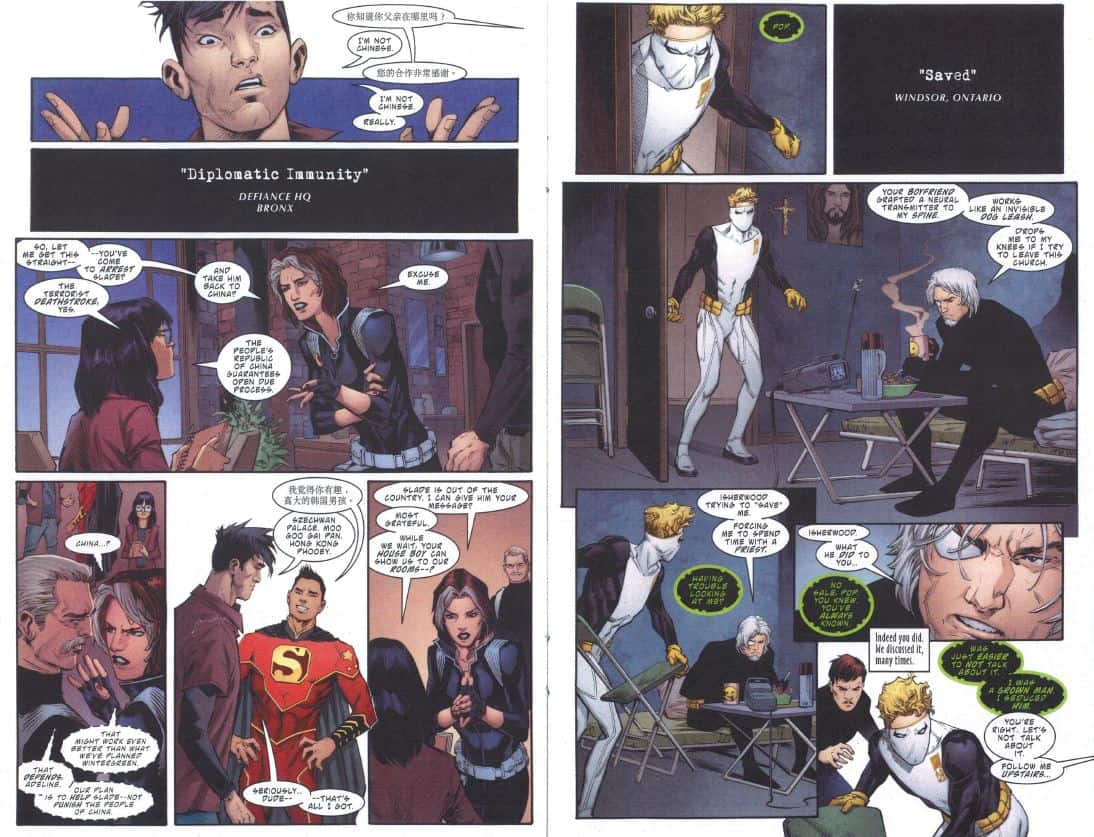 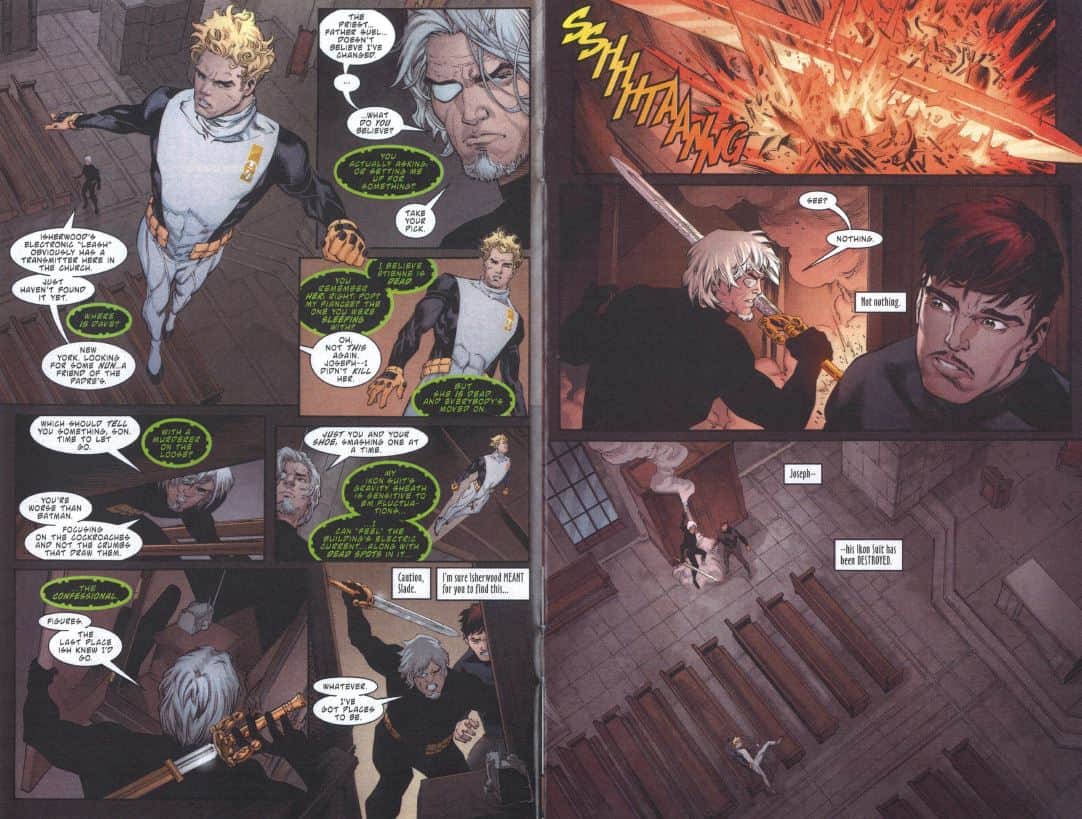 Back at the Mandarin Oriental Hotel, Terra (disguised as Willow) meets with The Forgotten asking him why he wants to hire her as a protective escort.  But he recognizes Terra and calls her out, asking why she killed his father and why Deathstroke wants to attack him and the White Lotus clan.  He accuses her of just coming here to spy on him and then his assassins try to kill her.

Priest clearly enjoys finding inventive, new ways for Terra to use her powers.  He has her pry out rocks mixed into the concrete pillars and fires them to knock down the assassins.  That’s when “Willow” throws a shuriken into The Forgotten’s chest.  He rips off his shirt to reveal a Kevlar vest and realizes he had the wrong girl now that the real “Willow” has arrived.  All “Willow” says is in Hmong and the name Claire.  Terra recognizes the voice as that of Rose Wilson.

A hail of bullets hits Rose as she falls through the window and is caught in the arms of Doctor Ikon.

Priest’s script in this issue shows him bouncing back from a weaker one last issue.  We still get multiple flashbacks and several lines of dialogue in foreign languages, but everything was clearer and easier to follow this time.

The biggest news about this issue is the retcons to the continuity of New Teen Titans.  As I noted above, I love what changes Priest has wrought here.  But what amazes me more is that DC’s editorial team signed off and gave their approval on them.

He manages to slice out a small but significant chunk of sleaze from the otherwise outstanding “The Judas Contract.”  In the process, he rewrites that highly controversial scene so that Slade is in fact far more manipulative and deceitful in a thoroughly underhanded way by having him trick Terra into thinking he wants or loves her.  It’s still a truly detestable move.  But the shock value is turned way down and instead, we are told more about Slade Wilson’s character by how he emotionally abuses Terra rather than a nudge-nudge-wink-wink moment trying to make fans think he took her to bed.

Tara Markov was always Marv Wolfman’s metatextual commentary on snide putdowns of his classic Titans run as nothing more than a rip-off of Chris Claremont & John Byrne’s Uncanny X-Men.  She wasn’t a three-dimensional person so much as she was a bit of writer’s legerdemain to trick readers into believing that Tara Markov was a clone of Kitty Pryde until…surprise, fanboys!  She’s actually a traitor!  Fooled ya, so there!

Priest giving us a few scenes about Terra’s childhood in Markovia, her adolescence in Boston and her secret life going to high school in New York helps round her out as more of a real person.  It also makes her more interesting and relatable.

The ongoing exploration of why Slade has chosen to be a quasi-hero forming a team of de facto heroes-for-hire with Defiance continues to unwind.  Ultimately, Slade is a hitman; a killer for hire.  He’s not a black or white person or a cardboard character.  He has shades of grey which Priest keeps showing through all of Slade’s actions good, bad and in between.  But it has proven to be intriguing and enlightening to read all the dialogue Priest writes for Slade where he talks about his spiritual awakening and his desire to do better and maybe even atone for his past.

This kind of characterization is unusual for any comic book.  It’s understated and not bombastic.  Priest isn’t trying to sledgehammer his points home.  Using his proven skill set as one of the greatest writers working in comics, he shows us instead of telling us with a clever combination of deft dialogue and carefully-planned characterization.  He elevates the medium and requires readers to pay closer attention to what’s going in his scripts instead of aiming for the lowest common denominator.

I could go on about how much he’s also expanded Jericho, Ravager, Kid Flash and others as characters by exploring them as well.  But I’ve only got so many pages.

Diogenes Neves and Jason Paz have become one of the sturdiest and most reliable art teams in comics.  Their visual storytelling in Deathstroke is clear, sharp and captivating.  Whether it’s quiet moments of simple conversation or all-out action, Neves and Paz are giving fans their money’s worth and beautifully bring Priest’s superb scripts to life.

Deathstroke by Christopher Priest, Diogenes Neves, and Jason Paz continues to be one of the top 10 comic books currently published.  If you’re not reading it, why the hell not?  It’s intelligent, thoughtful, action-packed, fast-paced, fun and funny.  Buy this damn book!