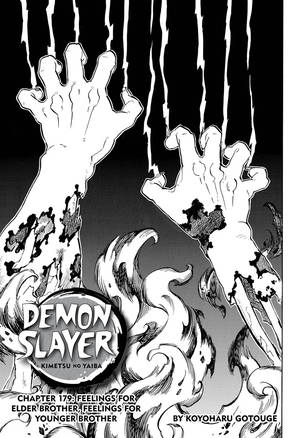 The Twelve Demon Moons have completely fallen; however, they have taken a great deal from us as well. Many of the Hashira have fallen after the battle with the Upper Moons, giving us so many tragic ends to our favorite ones. As we come closer to the confrontation of Muzan Kibutsuji we have seen many things revealed during the last confrontation of Upper Moon One. And while the revelation of the Twelve Demon Moons had been displayed for us, we cannot help but feel pity and anger towards them. And now we are feeling our hopes dashed as Chapter 179 has been released and we yet again say goodbye to two others.

Muichiro Tokito, a descendant of Upper Moon One, known as Michikatsu Tsugikuni or Kokushibo, held the very strong demon down allowing the other Hashira to take on the assault against the demon. While Genya Shinazugawa planned with Tokito in taking down Upper Moon One, however, it would cost them their lives. As Chapter 179 released, we see the aftermath of what has happened to them both as they are confronted with their past and their loved ones. With Tokito crossing over to see his brother, Yuichiro Tokito that is filled with anger over what has happened to him. Even begging for him to go back, but there is no moment for him to return. As they both confront one another about their happiness and their unhappiness about what life had given them both. The brothers give us a sense of knowing that even though they didn’t want the other die, that is life as a Demon Slayer.

And now, we see two other brothers, Genya and Sanemi Shinazugawa taking their final moments. While Sanemi had tried his best to get his younger brother to quit the Demon Slayer, we see that Genya had been important in taking down Kokushibo. And as the brothers reconcile from their past and show their brotherly love towards one another. We see that Sanemi begs for the life of Genya, and this is what all of us are hoping for, but we are given a heartbreaking moment as Genya crumbles along with our hope. The emotions that have been played out during this arc and we have been unable to breathe during it as we see so many Hashira pave the way for the confrontation of Muzan Kibutsuji. We have seen the backstories and the encouragement of them all as we move forward. While we are broken as the last of them are turning towards the demon that had brought about the age of demons.

Koyoharu Gotouge has brought forward such a beautiful and saddening moment in this chapter as we see even the strongest and ruthless Hashira fall onto their knees. They have given us a moment to say that each one of us has a story no matter who we are, a demon or a human.

It is in the end that we either seek peace or not, and Koyoharu Gotouge has given just that as we see into the past. And now we march forward and raise heads as the next chapter is to be released on October 27th. Will this be the moment we see Muzan fight with the Demon Slayers or will this be another fight with another Upper Demon Moon? We cannot wait for what Koyoharu Gotouge has in store for us.

Shadow Service #9: What Could Be So Monstrous That it Terrifies a Hell Lord?
June 24, 2021
Recent News & Reviews