A Demonstrable Show of Force (The Demon: Hell is Earth #2) 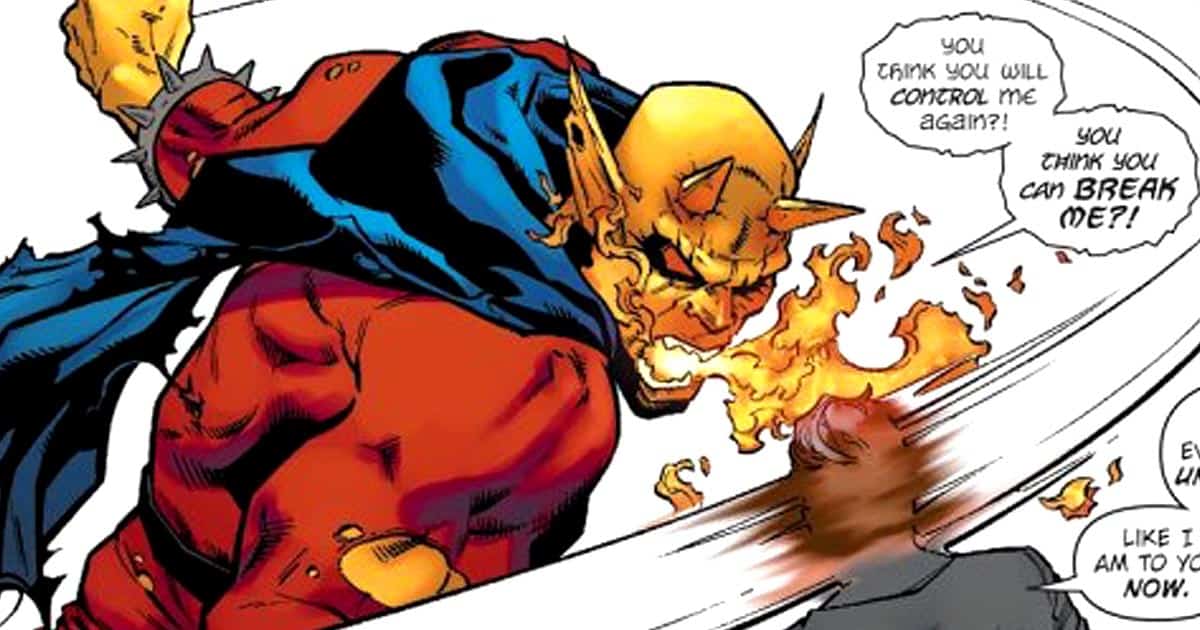 Dealing with the very literal fallout of the first issue, Jason Blood and Etrigan find themselves in a very unfamiliar situation. With Blood separated from him, Etrigan finds himself haunted by his other half. But what will happen to the psychic girl whose dreams are plagued by The Demon? Where is Madame Xanadu? Will the US Government just accept a demonic nuclear explosion? Read on! 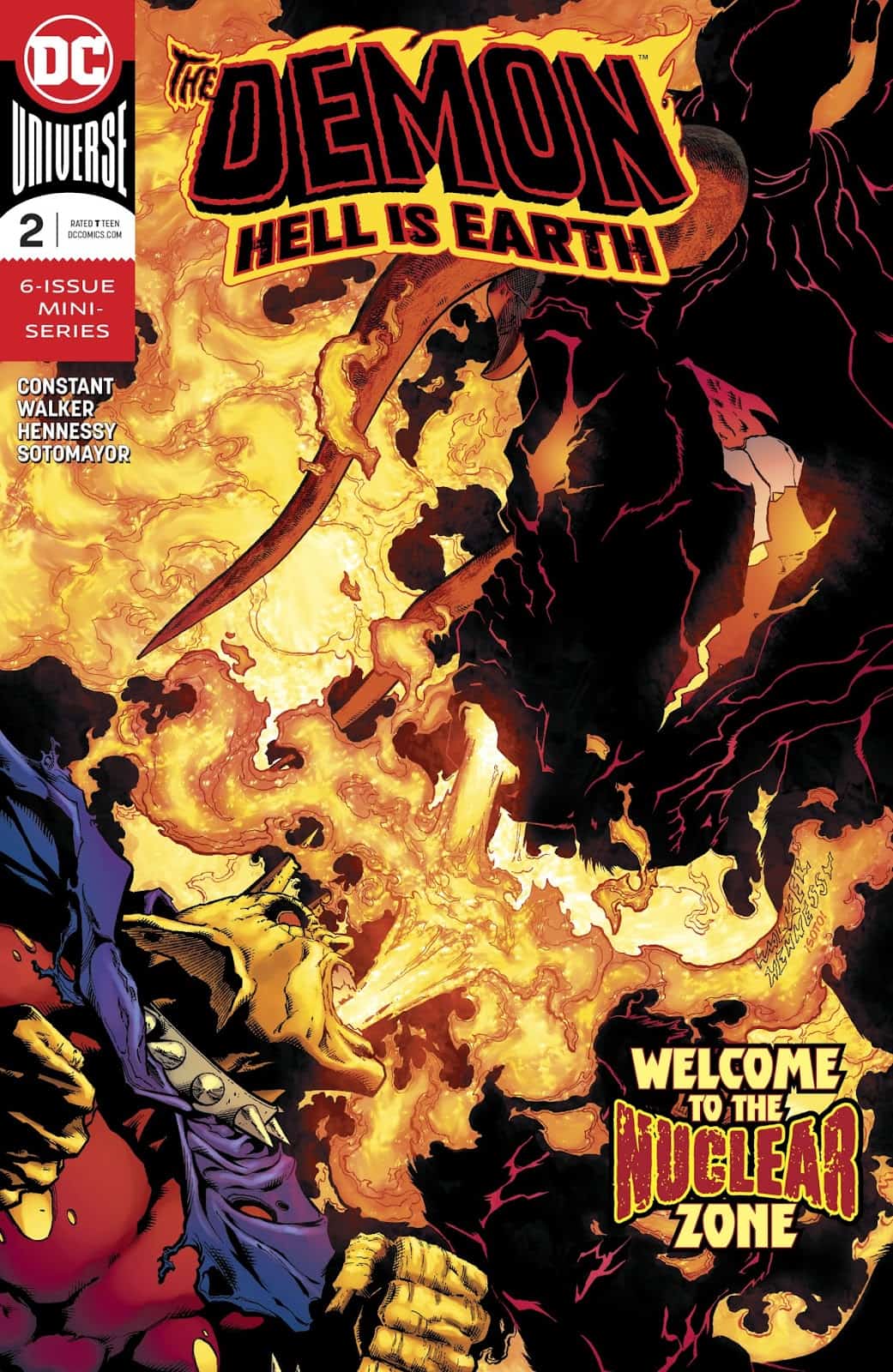 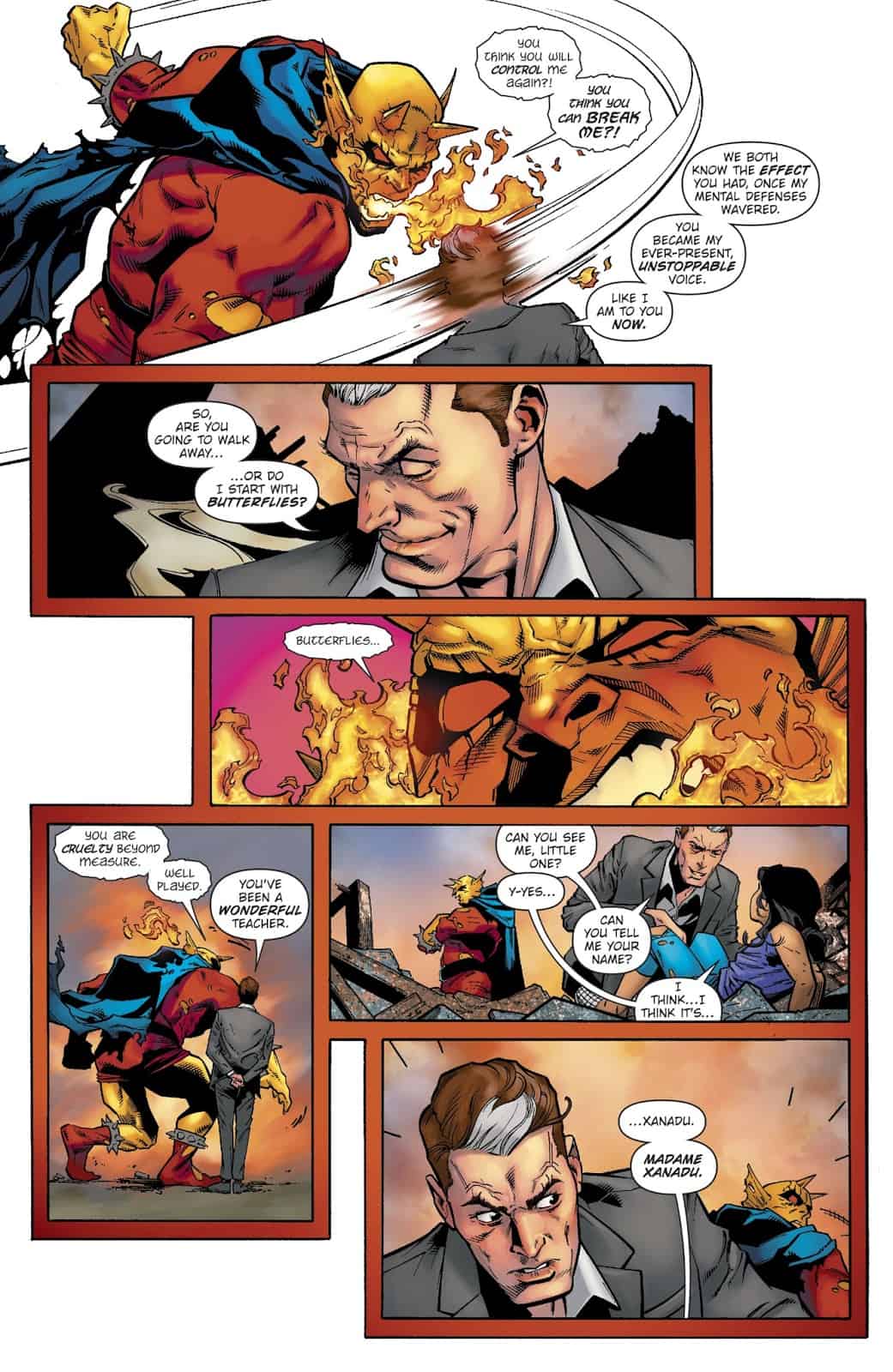 What You Need to Know:
In the previous issue, we find Jason Blood in Death Valley for mysterious reasons. Madame Xanadu is headed his way for equally mysterious reasons. Also caught in this infernal crossfire is a small girl with psychic abilities, and who has been having recurring nightmares of a yellow rhyming demon. The common thread between them all is Etrigan, The Demon. None of them have much time to consider this before a nuke is dropped on all of them. Yes, you read that right, a nuclear bomb, dropped by a general at a nearby military base who is being controlled by an as of yet unnamed demon. Jason Blood turns into the Demon to survive the explosion and is quickly greeted by other hellish creatures in the fallout. Meanwhile, the girl inexplicably survives and is beset by her former family, who are now monsters. Etrigan steps in and saves her, and is about to roast her with hellfire breath when he unexpectedly sees Blood standing there. 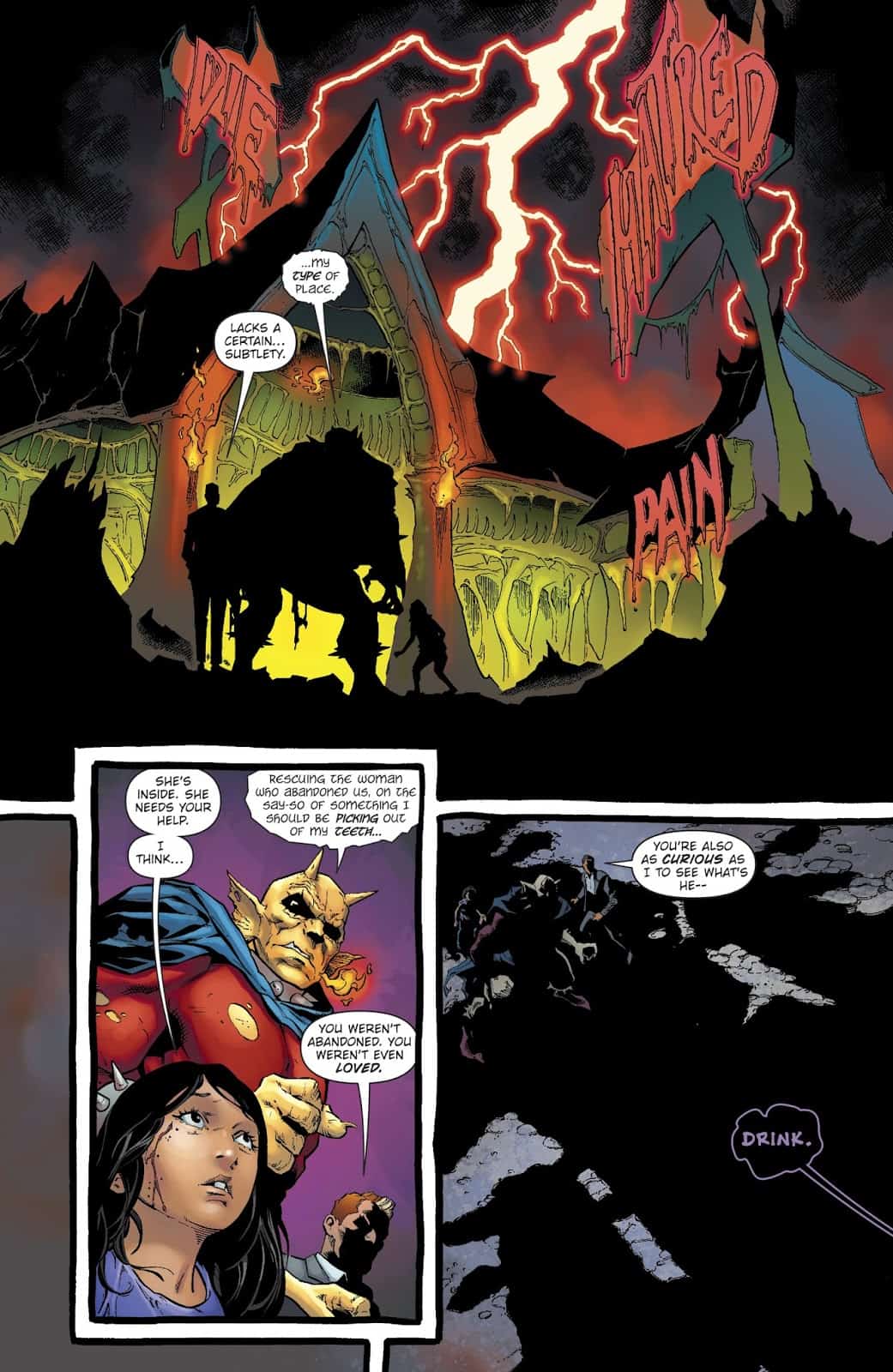 What You’ll Find Out:
We find the Demon Etrigan and Jason Blood at an impasse. Now free and stuck with Blood ironically over his shoulder, Etrigan feels the weight of his alter ego in a way he never has before. Though intent on killing Nimue, the psychic girl whose name we learn in this issue, Blood stops him. Blood tortures him with memories of love and kindness, and all things cute in general, much as Etrigan has done to him this whole time. Nimue begins to have visions again, which include a nearby Madame Xanadu, piquing both Blood and Etrigan’s interest. They go to find her and find hellishly twisted versions of the rednecks Xanadu had turned into cows in the previous issue. Etrigan rushes headlong to the fight, and Jason Blood, currently incorporeal and thus fairly useless in a fight, goes to find Xanadu. Etrigan kills all the attacking hellspawn, and everyone is left to plan out their next move. Nimue has another vision, this time of a demonic invasion of apocalyptic proportions. Etrigan is unimpressed and seemingly incinerates Nimue, leaving only a little girl skeleton. 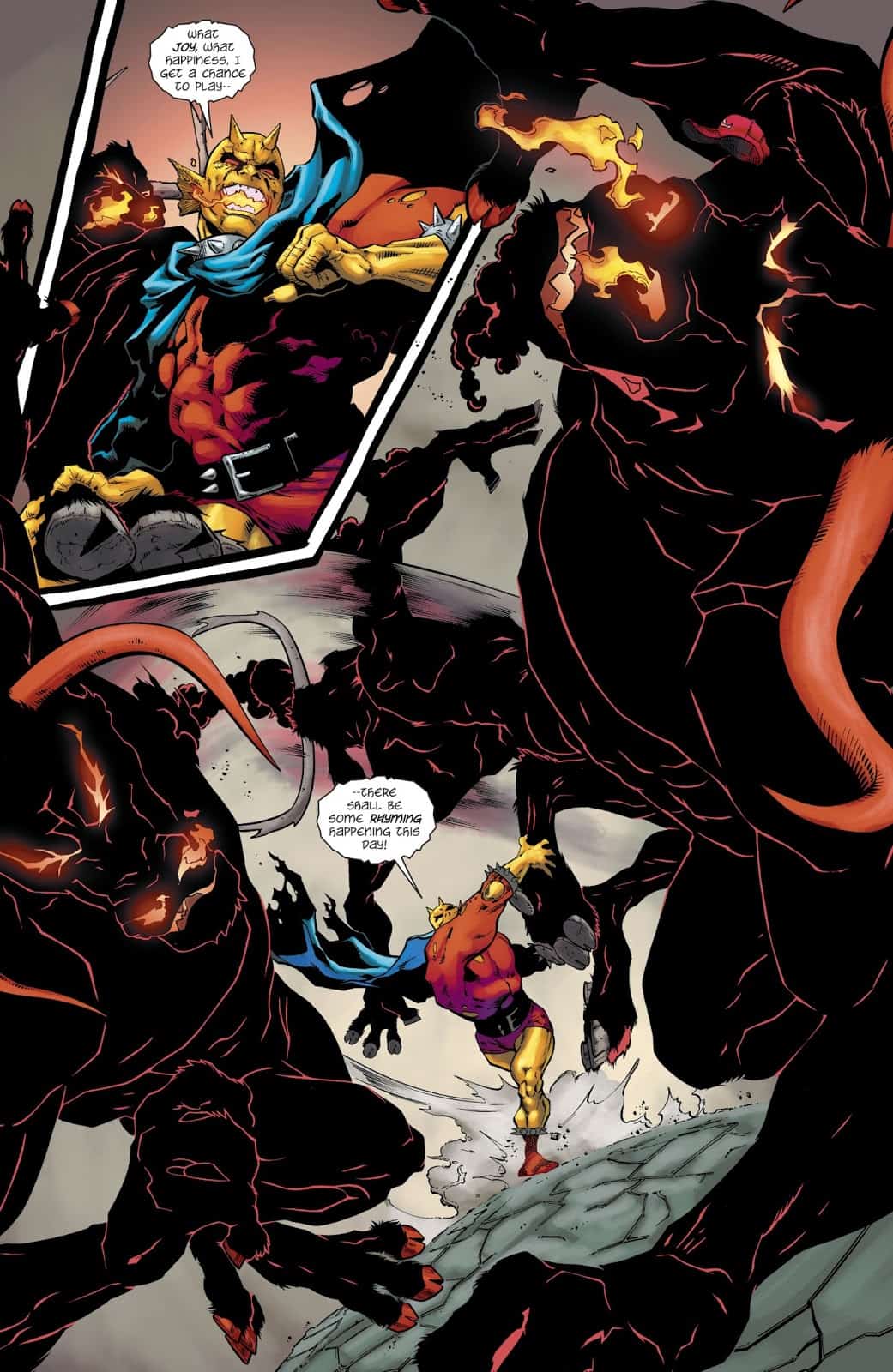 What Just Happened?
While they’re not reinventing the wheel in this series, there are definitely a lot of cool development moments for Etrigan and Jason Blood. You can really feel the resentment between the two, and it works really well here. While making changes to these characters, they don’t really affect the core of said characters, which is nice if you like the older incarnations. Etrigan is just as cruel as he ever was in the Garth Ennis stuff (although maybe without the sense of humor.)
I was particularly fond of the conceit of Etrigan’s rhyming. The idea here is that Etrigan truly enjoys rhyming, and does it for his own benefit, but has chosen not to do it in front of Jason Blood. It’s pretty fun to see him let loose in battle with the classic rhymes, but petulantly not rhyme around Blood or Madame Xanadu.
Like the first issue, the art is very fitting for the book. Walker has a very nice exaggerated horror feel in many panels that really lends itself to The Demon. It really pops at the demonic hotel with the former rednecks, now demon cattle. It looks classic, but at the same time not dated.
Ultimately, the book is just fun Demon action. You’re not going to get Shakespearean Alan Moore type Etrigan, and you’re not going to get darkly funny and goofy Garth Ennis Etrigan. This is a truly evil, completely malicious version of The Demon, and it’s really interesting to not see him played for laughs, as he very often has been.

Final Thoughts: While I don’t think it’s going to be winning any Eisners, The Demon is a damn good time and a hell of a lot of fun. It’s a good read for old and new fans of Etrigan alike.