Plans of betrayal prove to be rather difficult against time travelers as Deadpool attempts to fulfill his agreement with Stryfe! 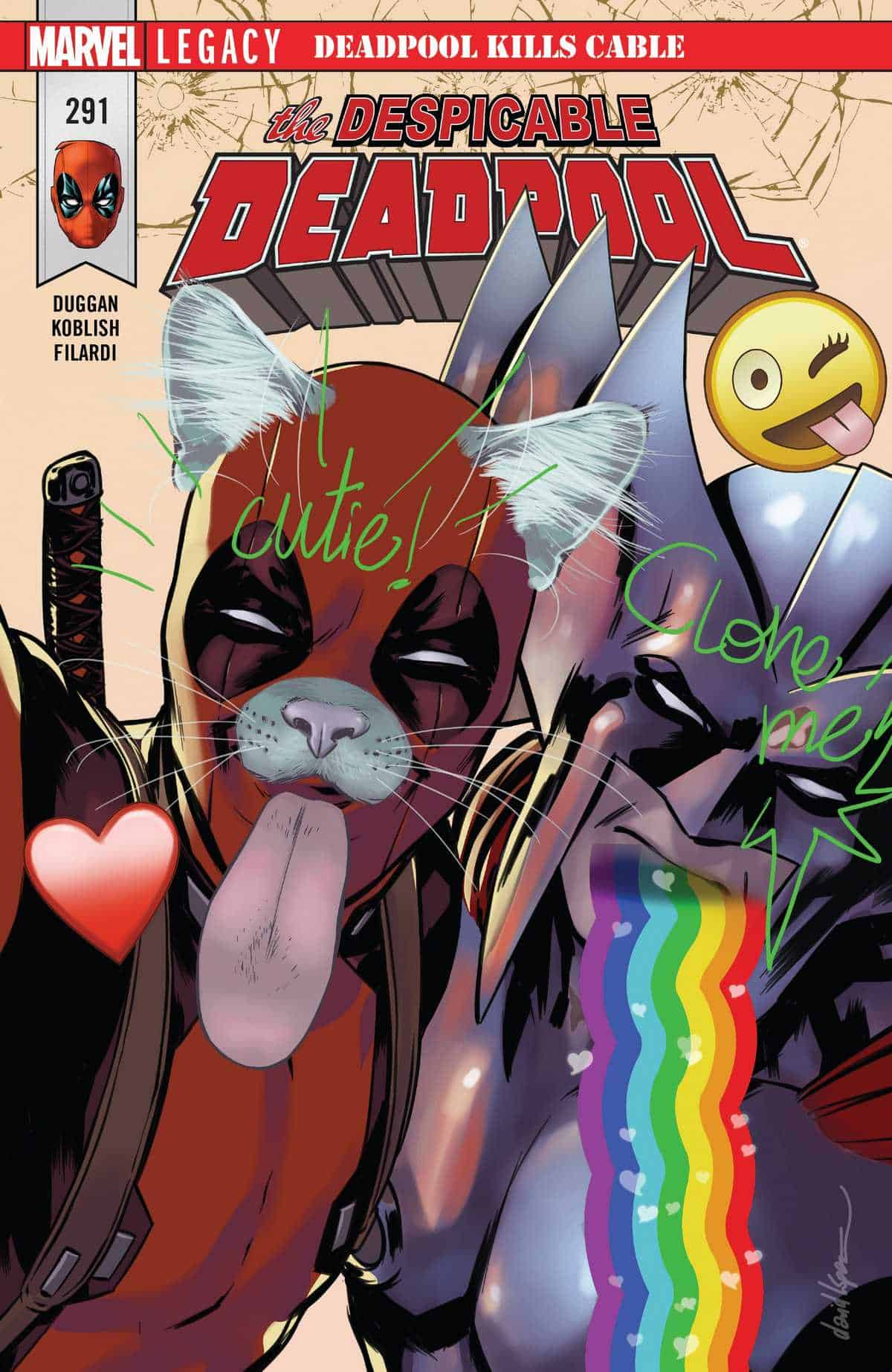 Deadpool’s hit list from Stryfe that requires the heart of Cable has led him through a series of failed assassination attempts, but now that’s all in the past. Cable agrees to help and says he has a plan to get Deadpool out of the situation. After a secure call from Deadpool’s newest home in the subway tunnels, the two travel millions of years into the future on a time-traveling bullet train.

They arrive at the final moments of a dying universe where an “Old-Man Cable” has lived to see the last light of the universe. Though “Old-Man Cable” vehemently demanded to see what he has earned, Deadpool shot him in the face anyway then used a bowie knife to cut his heart out. Now he can fulfill his requirements to Stryfe, but Cable has other plans. If Stryfe wants his heart, there is only one answer as to why. He is going back into the cloning business…

Deadpool contacts Stryfe in a phone booth to let him know that the task has been completed and he is ready to meet. In his impatience, Stryfe teleports Deadpool aboard his blimp high into the air but refused to heed Deadpool’s warnings of him currently free-balling. Within moments, Deadpool is standing in the middle of Stryfe’s room with no pants while getting drunk and asking if his decorator is Bruce Timm.

As Stryfe uses various methods of verification to identify if the heart given to him truly belongs to Cable, Deadpool makes his way around the blimp noticing that Stryfe is tracking every mutant on Earth. After disregarding this as mundane, Stryfe is quickly amazed to see that it is, in fact, Cable’s heart. Just as he begins explaining that he had expected some sort of betrayal from Deadpool, an intruder alert rings through the blimp. Confused, Stryfe demands Deadpool explain what is going on when Cable comes bursting through the blimp with weapons in hand. 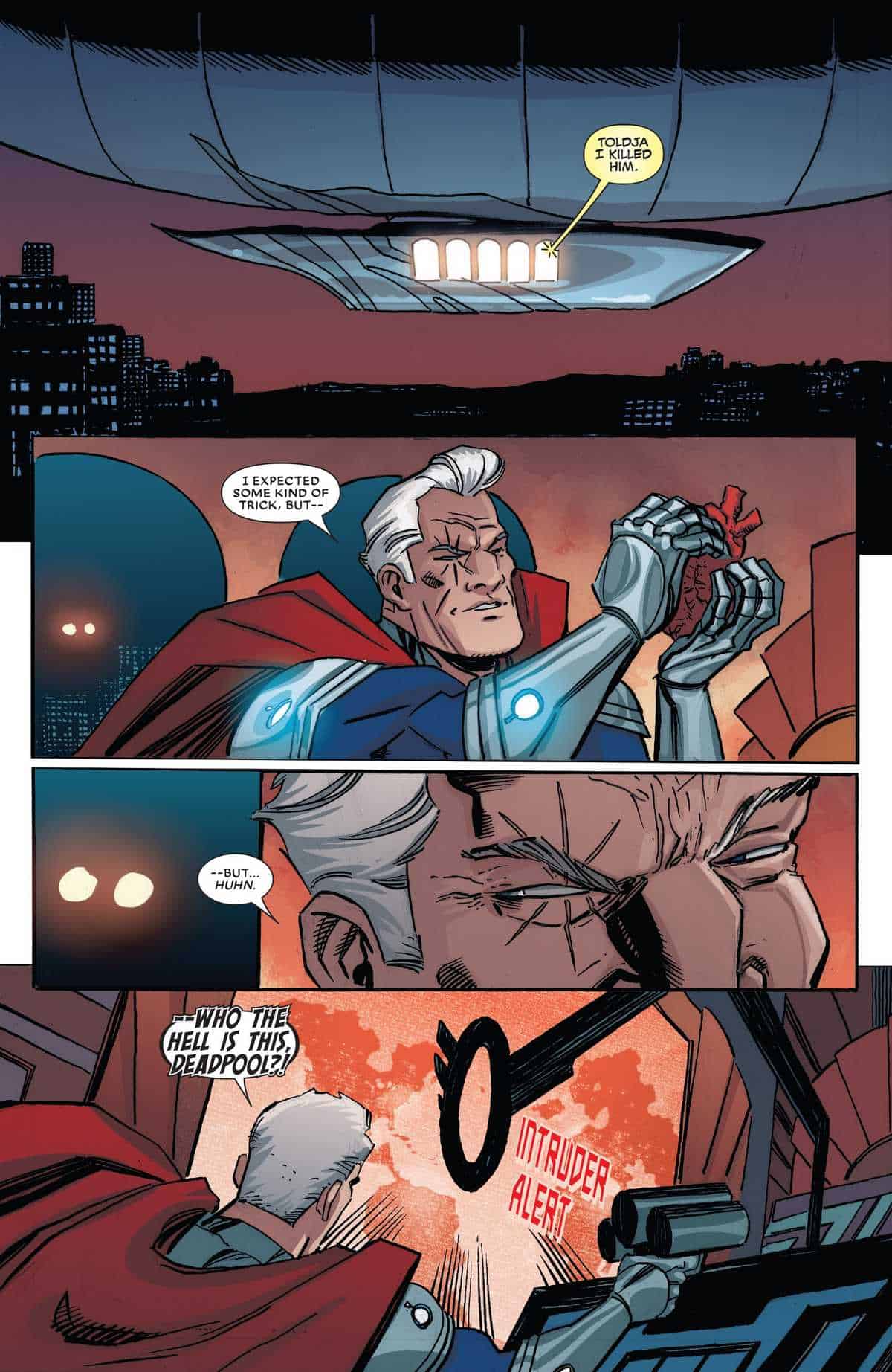 Stryfe attempts to quash the betrayal immediately with a powerful blast that sends Cable flying. Before Deadpool can react, Stryfe has his hand grasped around his throat, lifting him into the air while threatening him. Deadpool reaches into one of his pouches and with a quick downward thrust, stabs Stryfe right in the eye!

As Cable attempts to finish off the blinded Stryfe, Deadpool receives a phone call in the middle of the battle. It turns out to be Ellie, who is being held hostage at the hospital by a future Stryfe that has fixed his eye and returned to act as a fail-safe in case Deadpool did attempt this type of betrayal. Without hesitation, Deadpool hangs up the phone, says he is sorry to Cable and fights him away from Stryfe. He explains that when he had Cable’s time machine, he planted a bomb that would kill Hope and his only choice is to immediately go back in time to save her. Furious, Cable punches Deadpool to the ground saying the next time he sees him, he will kill him and make sure he stays dead.

Stryfe knows his fail-safe called and forced Deadpool’s hand, and he tells him that the next targets on his list must all be from this year. Then, he literally hurls Deadpool through the window of the blimp and sends him falling into the water below. Deadpool floats on his back through the water for a while contemplating the dead stars above with a hobo before he arrives at a sewage tunnel. 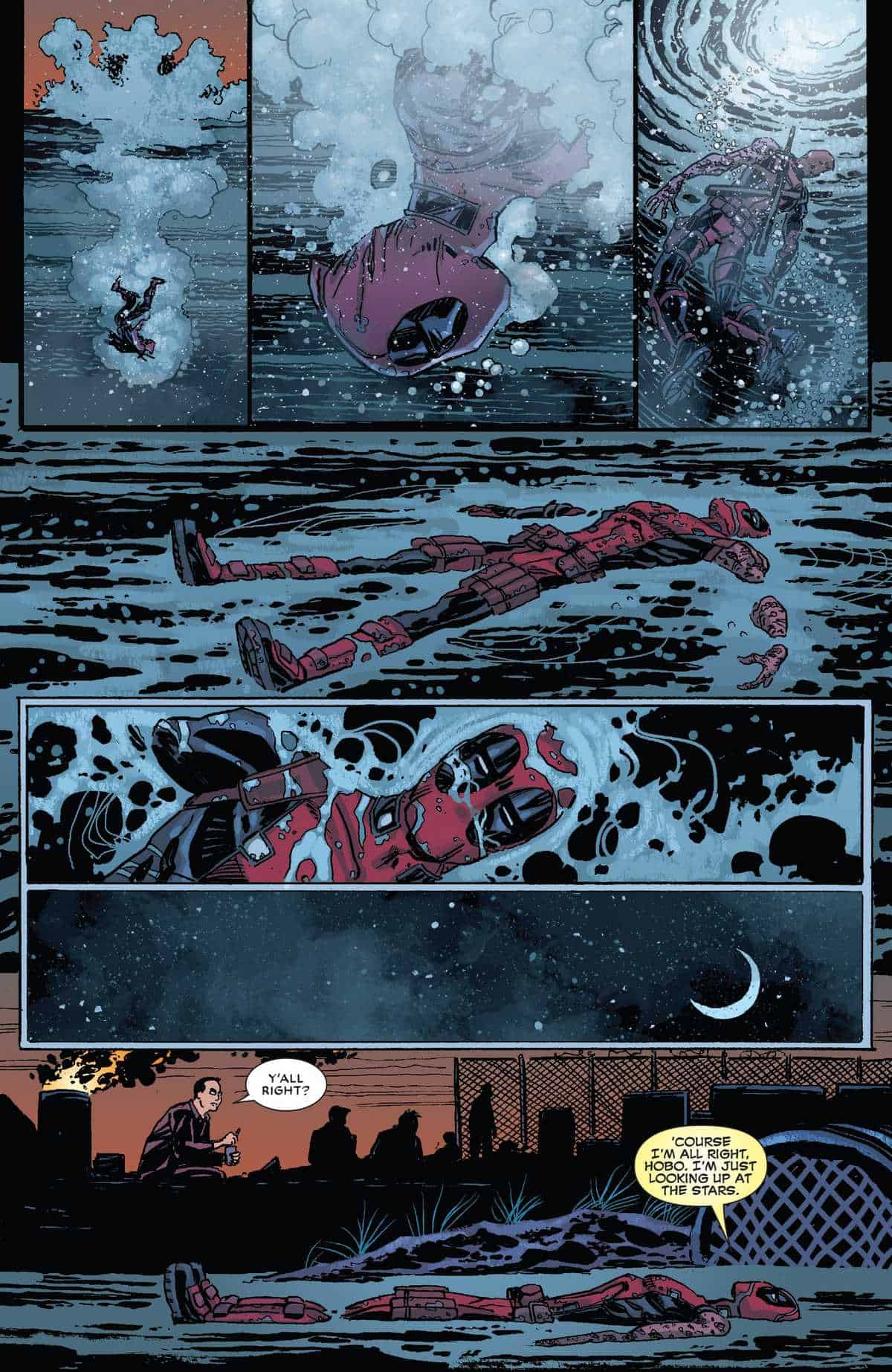 He enters what looks to be a secret hideout of his and lifts the lid on a wooden crate to reveal a mangled Preston staring up at him. As he tells her about how his day went, his old friend Bob calls him with an intriguing information.

Remnants of Hydra have found the evil Steve Rogers, and he has the details on his location…

What Just Happened?
What turns out to be the finale of the Deadpool Kills Cable arc ends with a betrayal gone wrong, but a promising lead on a high-profile target! Up to this point, the chemistry between Cable and Deadpool has been an enjoyable aspect of the story. However, with Stryfe orchestrating the events that transpire, the narrative has seemingly focused more on Cable and Stryfe.

This element, unfortunately, becomes even more prominent in the latest Despicable Deadpool issue, making it feel as though Deadpool is a guest feature in his very own book. Though there are hilarious moments like when he was teleported onto the blimp, the narrative itself focuses on the conflict between Cable and Stryfe so much that I believe the book itself even acknowledges it… 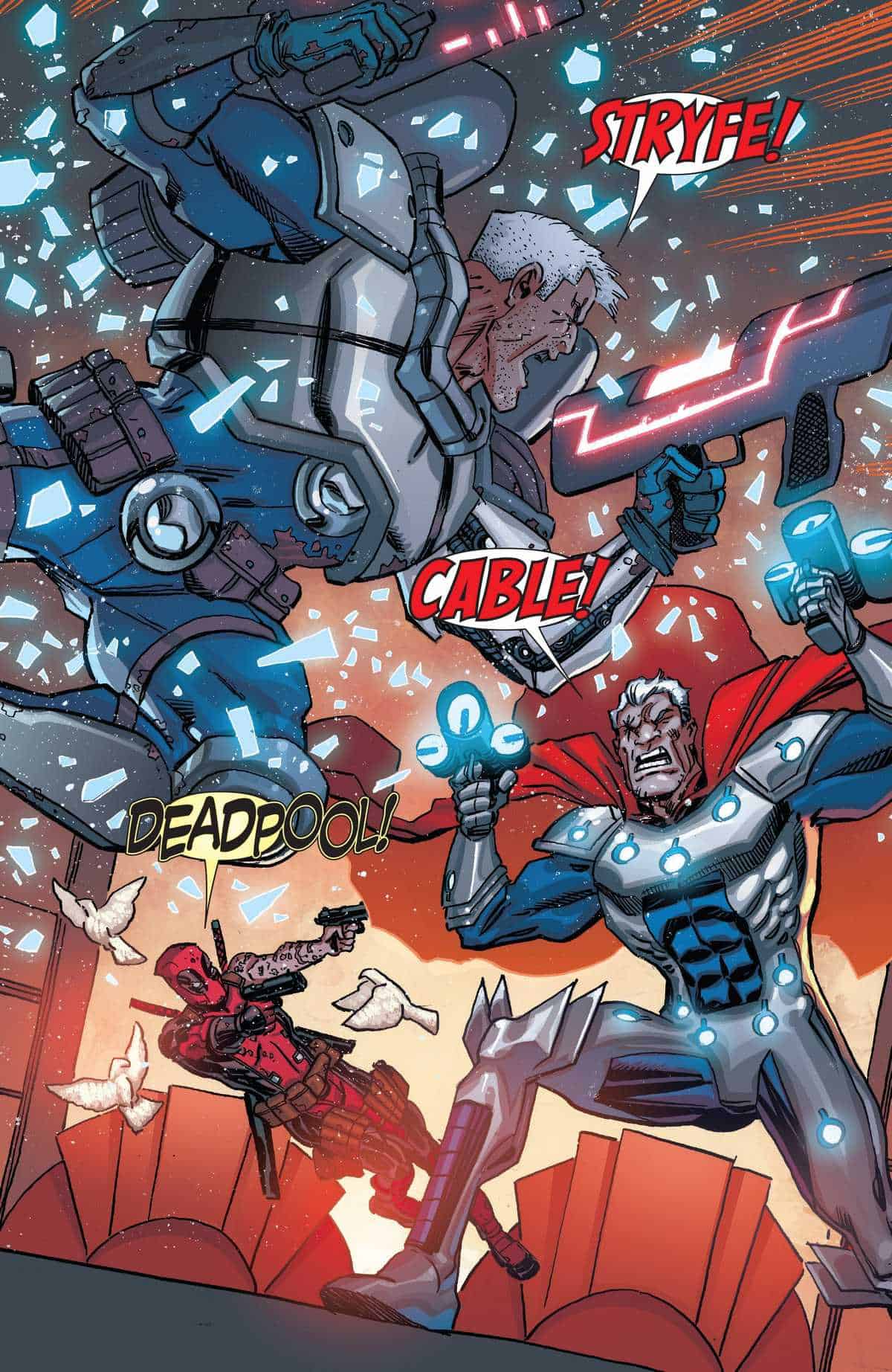 The art in the Despicable Deadpool series since Marvel’s legacy initiative has been undoubtedly great, but this issue just didn’t offer the memorable scenes that previous issues have included. From tearing Cable’s arm off to shooting “Old-Man Cable” in the face, the series has featured specific panels that are incredibly remarkable in each issue. The finale, unfortunately, seems to lack this, but this could be due to the shocking nature of the reveal at the end.

Though this wraps up the Deadpool Kills Cable arc, we are given a truly insightful moment at the end of the issue through a phone call with Deadpool’s friend Bob. We now know that evil Steve Rogers or “Stevil Rogers” has been found by Hydra, and Deadpool has the means to find him.

Overall, I am personally satisfied with the conclusion as well as eager to see where the series goes next as we follow Deadpool and his potential fight with a Nazi Steve Rogers!

Final Thoughts: The Despicable Deadpool #291 brings the Deadpool Kills Cable arc to a satisfying conclusion, despite it primarily focusing on Cable and Stryfe. While previous issues have successfully balanced these narratives, managing to detail the conflict between Cable and Stryfe without failing to give Deadpool a prominent role, this issue slightly falters. Luckily, the final pages tease a new target for Deadpool that is sure to have everyone talking!