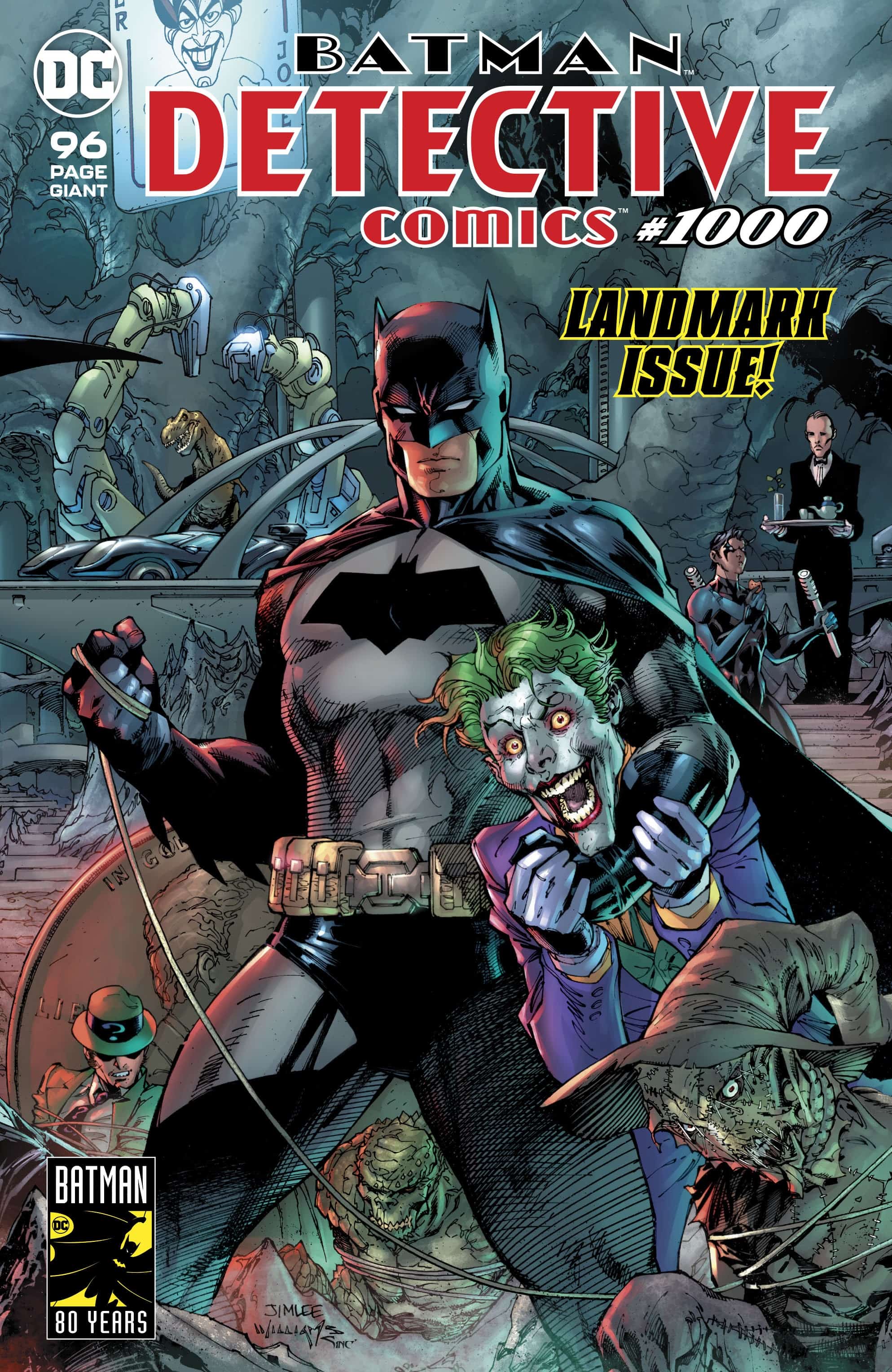 After 80 years, it’s here—the 1,000th issue of DETECTIVE COMICS, the title that literally defines DC! This 96-page issue is stacked with an unbelievable lineup of talent that will take you on a journey through Batman’s past, present and future...plus a sensational epilogue that features the first-ever DC Universe appearance of the deadly Arkham Knight! But who is under the mask? And why do they want Batman dead? The incredible future of Batman adventures begins here!

Snyder and Capullo prove once again that they are one of the Dark Knight’s best creative teams, showing us the epic conclusion to a case that Bruce has been working on since first becoming Batman. Capullo’s art works perfectly in most every scene while Snyder weaves a tale of Batman’s greatest mystery, one that took him from mountain peaks to ocean depths over many years, all culminating in a brilliant twist ending. 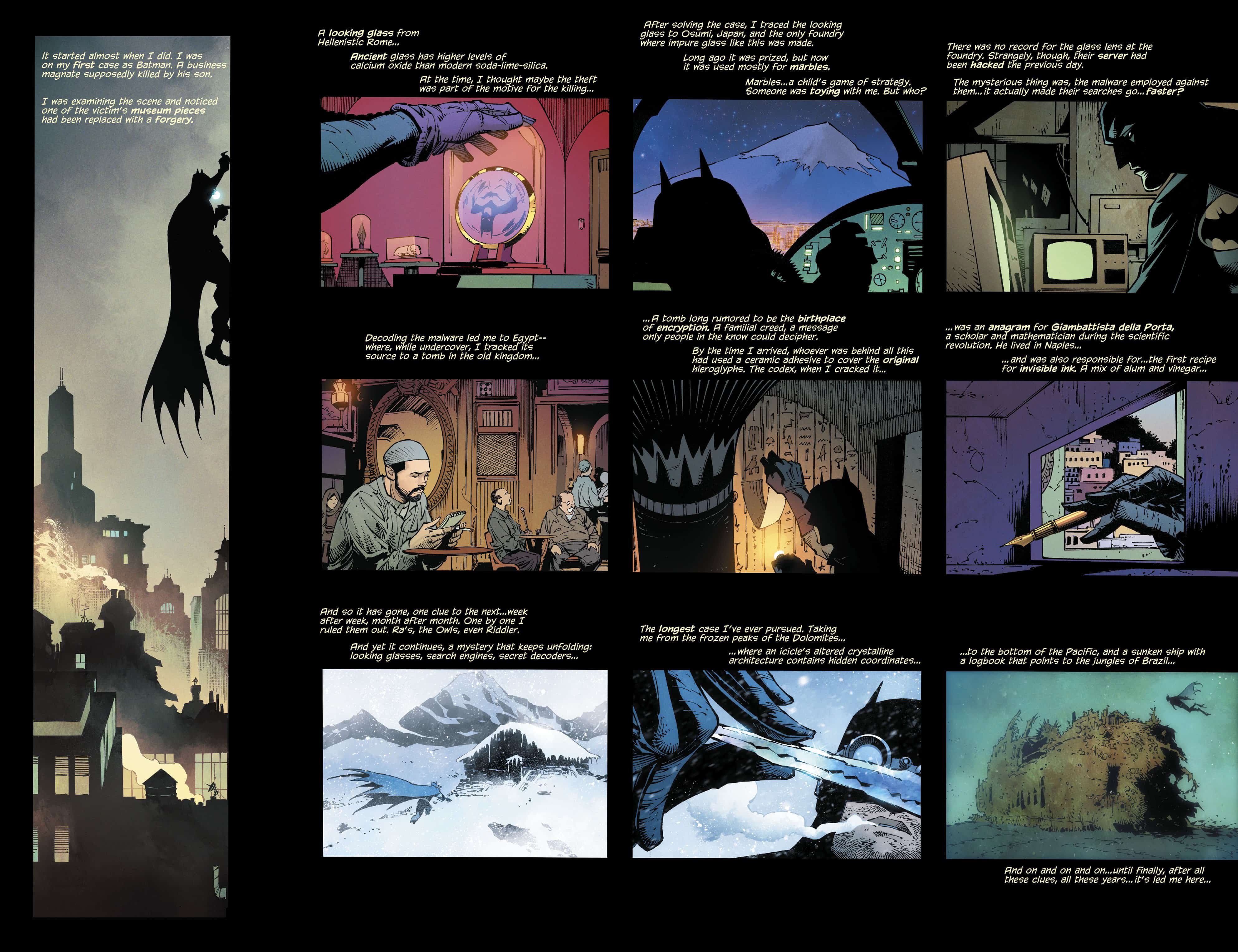 Kevin Smith and Jim Lee are a team destined for greatness in their short story for Detective Comics #1000. With the introduction of the Gotham Gift Shop, we see the truly dirty exploitation of crime offer a moment of growth for The Dark Knight. After exploring the various items for sale at the Gotham Gift Shop through a few iconic visuals, Batman reveals his intentions by purchasing the gun that supposedly killed his own parents that fateful night in the alleyway.

The emotional core is the real success of this story. Its willingness to explore a sense of vulnerability through the prism of Batman’s violent nature delves into the often-complicated duality that drives the character. This makes for an interesting story that is incredibly heartfelt. Though the message could be a bit more nuanced, the creative teams manages to deliver a truly memorable story overall.

“The Legend of Knute Brody”

Dini crafts a tale of an ill-fated henchman named Knute Brody as Bruce interogates the many villains whom Brody has worked for over the years. In each instance, Brody made a fatal error that ruined the caper for the Rogue’s Gallary of heavy hitters. We learn by the end, though, that these incidents were not in fact the work of an imbecile but a carefully crafted series of infiltrations by members of the Bat-Fam posing as the made up “Knute Brody.”

“The Legend of Knute Brody” has a very 1960s Bat-Story feel that gives this anniversary issue a much-needed expansion of historicity even if the story itself falls a little flat in execution. Nguyen’s art is perfectly fine, but the story would have landed better if Dini’s “Animated Series” voice had been accompanied by a style more in tune with the classic series (Bruce Timm. I’m talking about Bruce Timm). Not the best of the bunch but also not the worst.

As many of the other entries in this volume, Ellis and Cloonan’s “The Batman’s Design” focuses on one particular element of Batman’s persona– the meticulous planning. As Bruce chases a group of criminals from a hospital hostage situation, he does so with intent. Intent is perhaps Batman’s greatest skill, and Ellis captures that beautifully with “The Stage”– a pre-staged battleground arranged and catalogued like a chessboard, ready for just this sort of event. Ellis masters the technique of the interior monologue for Bruce, using it to both explore the terrain but also the aforementioned intent, allowing Cloonan the space to craft a stunning array of visual sequences that drive the narrative.

A visit to Crime Alley shows Leslie Thompkins just how far into this life of violence Bruce has sunk in this sequel to the classic Detective Comics #457 story “There is No Hope in Crime Alley”. 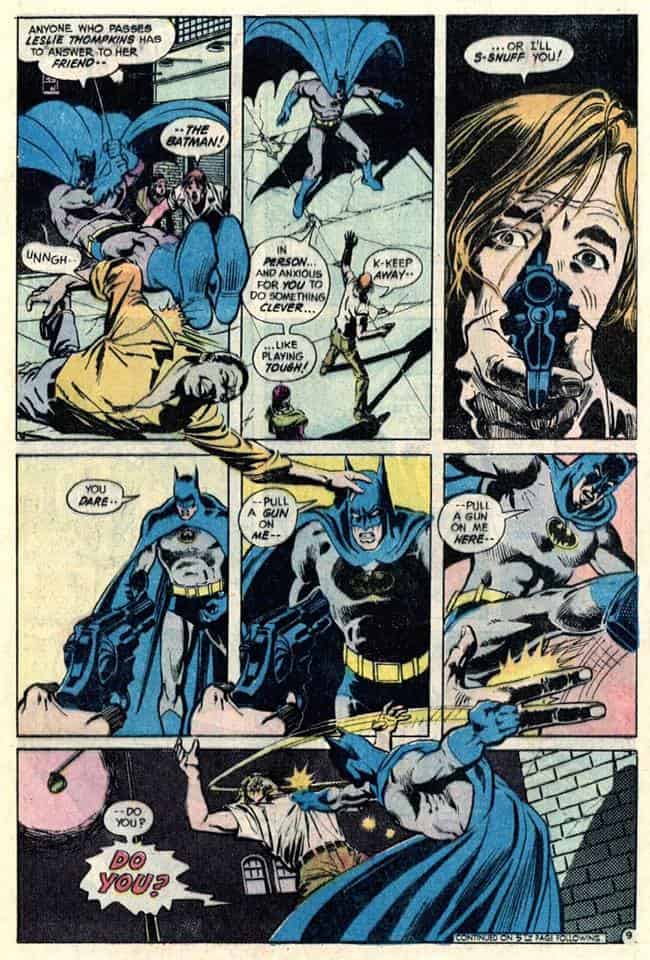 This story serves as a deeper look into the original story as much as a sequel, in the original story the centerpiece is Leslie’s relationship with a younger Bruce whereas this one seems to exist to show us Leslie doesn’t like violence or approve of Bruce, both of which we know. I liked the deeper look into Leslie and Bruce’s yearly visit but this could have been much more than it was and I was frankly a bit disappointed. The upside of this story is the phenomenal art by the always exceptional team of Steve Epting and Elizabeth Breitweiser (check out TKO Studios Sara for an entire book of their work together) which is beautiful. I liked the homage to the late Dick Giordiano’s work on multiple pages, powerful stuff.

Priest and Adams team up to craft a tale that starts as all great detective narratives should– with a mystery. Unfortunately, the mystery is too easily solved (as is often the problem with a short-anthology format) leading to a digression through Batman’s past with the League of Assassins. As rushed as the story felt, Adams’ iconic art felt even more so, particularly in relation to inks and finishes. The artwork was rough in many places and coming from one of the all-time great Batman artists, it was a letdown in many ways for such a momentous occasion. The story and art weren’t bad, per se, but felt lacking in the situation. Priest does manage to spin his yarn into a potential prelude by ending with Batman’s ultimatum to a group of Leaguers hunting heretics by ending with the words “The Beginning…”, potentially hinting at future Priest/Batman stories.

The penguin reveals that he knew Batman’s identity all along in a tale of yesterday’s present. What could the upside of revealing it be though? 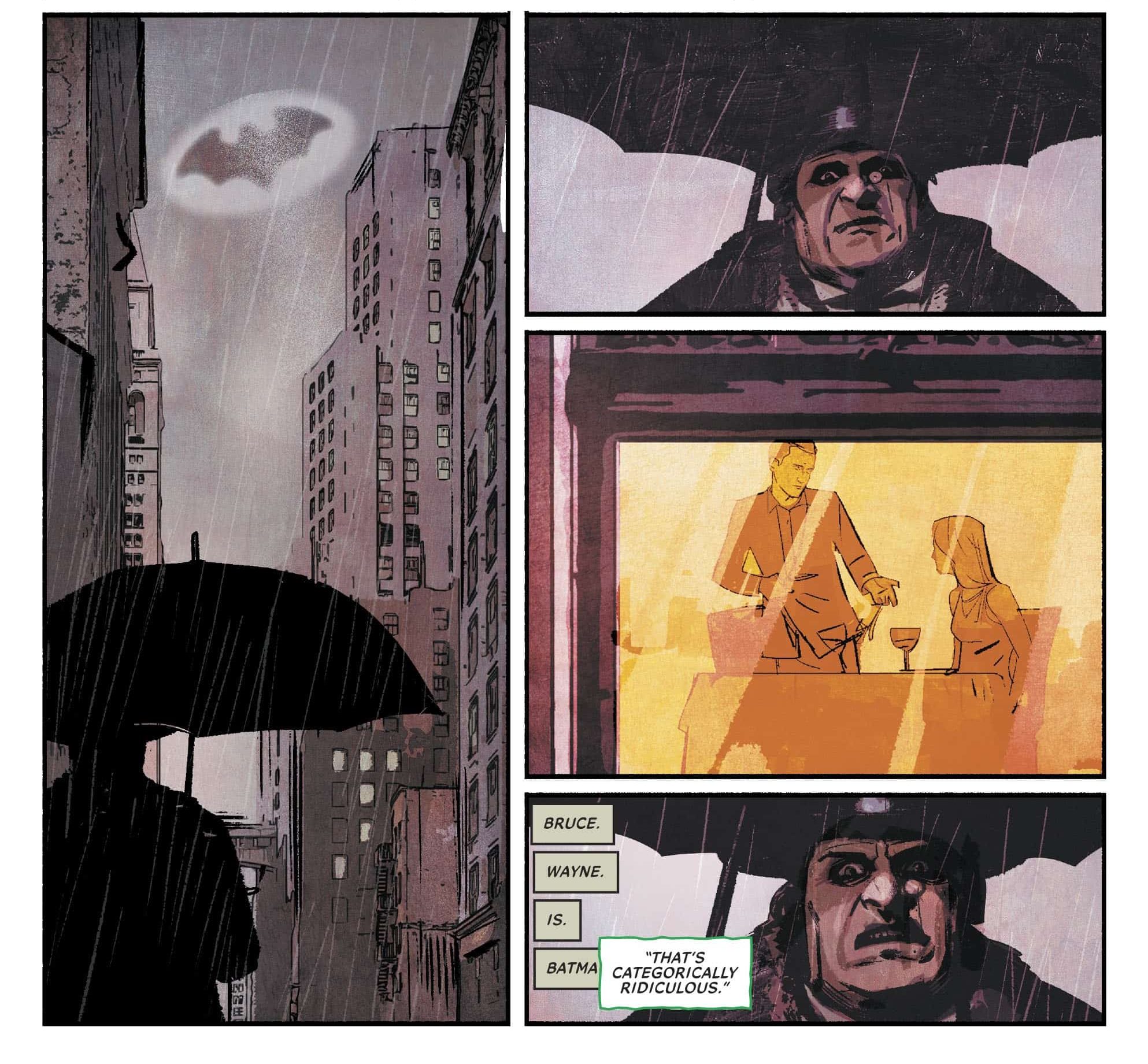 I gotta say I called this story early on in our talks of who reviews what, I actually really like Brian Michael Bendis’ voice on Batman stories, I feel like he does street level heroes excellently and his trademark humor plays as a Morrison esque wryness that is refreshing in the era of sad-bat books. The art by Bendis’ Daredevil coconspirator Alex Maleev is exactly as perfect as I would expect, he’s a treasure.

“The Last Crime in Gotham”

Writer Geoff Johns, artists Kelley Jones and Michelle Madsen, and letterer Rob Leigh flash forward to Gotham’s future while deftly tipping their hats to one of its most-fondly-remembered tales of its past, “The Long Halloween.” All – well, almost all – crime has been eliminated. So who’s behind the grisly murder of twelve? Does the Joker have anything to do with it? What do Ace the Bat-hound (COMPLETE WITH A CAPE AND COWL!) and Batman and Catwoman’s daughter Echo think about it?

Legacy is the core theme of the story. For better or worse, everybody has one – what, then, does Batman think about his (when he has a moment to relax and think such thoughts, that is)? There have been plenty of post-apocalyptic flash-forward Batman stories told over the years, but rarely if ever do any of them take on a hopeful tone. That tone, though, feels mismatched with Kelley Jones’ idiosyncratic goth-noir moodiness. His art, while not for everybody, is more than technically proficient (with a few rushed panels here and there, an oddly persistent trait) and has its best brought out by Michelle Madsen’s vibrant colors. The story wraps in a manner that is at once inconclusive yet also brings closure in a clever, optimistic way. Observant readers may guess what’s actually going on from the first oblique page, but it’s a fun, brief ride nonetheless.

I’m not sure why I never thought to slap the two together, but James Tynion IV, this guy needs to be writing Nightwing. Paired with Alvaro Martinez-Bueno, Tynion knocks out an amazing short story that delves not only into the minds of Alfred and Bruce as to what the nature of Robin truly means to them and Dick. Using beautiful breakdowns to juxtapose exposition with glimpses of the Boy Wonder’s history, Tynion reminds us all just how much Batman needs Robin just like he needed Batman. Not only that, but it’s a nice introspection into just how much one kid in pixie boots has added to the Batman mythos and the DCU in general just by being himself. The extra kicker is when a young Dick Grayson steps in and throws his 2 cents in reminding Bruce how much Batman has “changed the game” in Gotham and around the world just by existing in the first place. 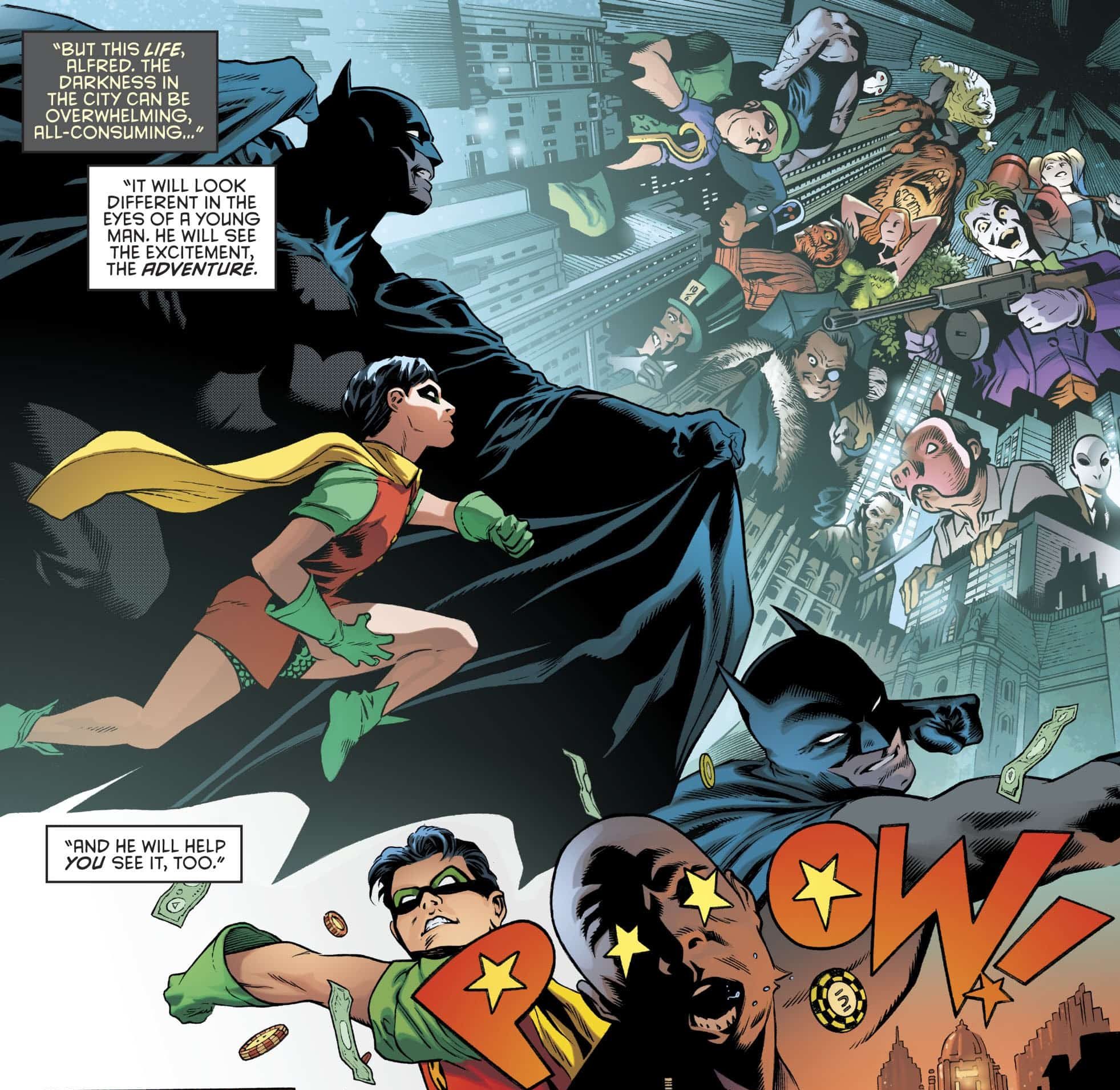 The whole story is just a beautiful example of what made the Dynamic Duo so resounding upon their debut and why the pairing has withstood the test of time. No, not every Robin has to be Dick Grayson, but the original sidekick drew the blue print for all others to follow. Tynion IV shows in just a couple pages a steely grasp of understanding on what makes the concept work, what makes Robin/Dick Grayson great, that some have tried and failed to do throughout whole runs of the character.

What do you do when you lose what you can’t ever lose?

Told through the complex relationships in the always-growing Batfamily, the conversation about Batman’s own questions and search for personal truth quickly becomes the focus. This is a character who is notorious for not just losing his only family but struggling to cope with that loss in a truly concerning manner (dressing like a bat and fighting crime, for one). However, in the chaos of so many of Gotham’s heroes awaiting Bruce’s arrival, we discover the truth he has found throughout the years. He has been surrounded by his family all this time. 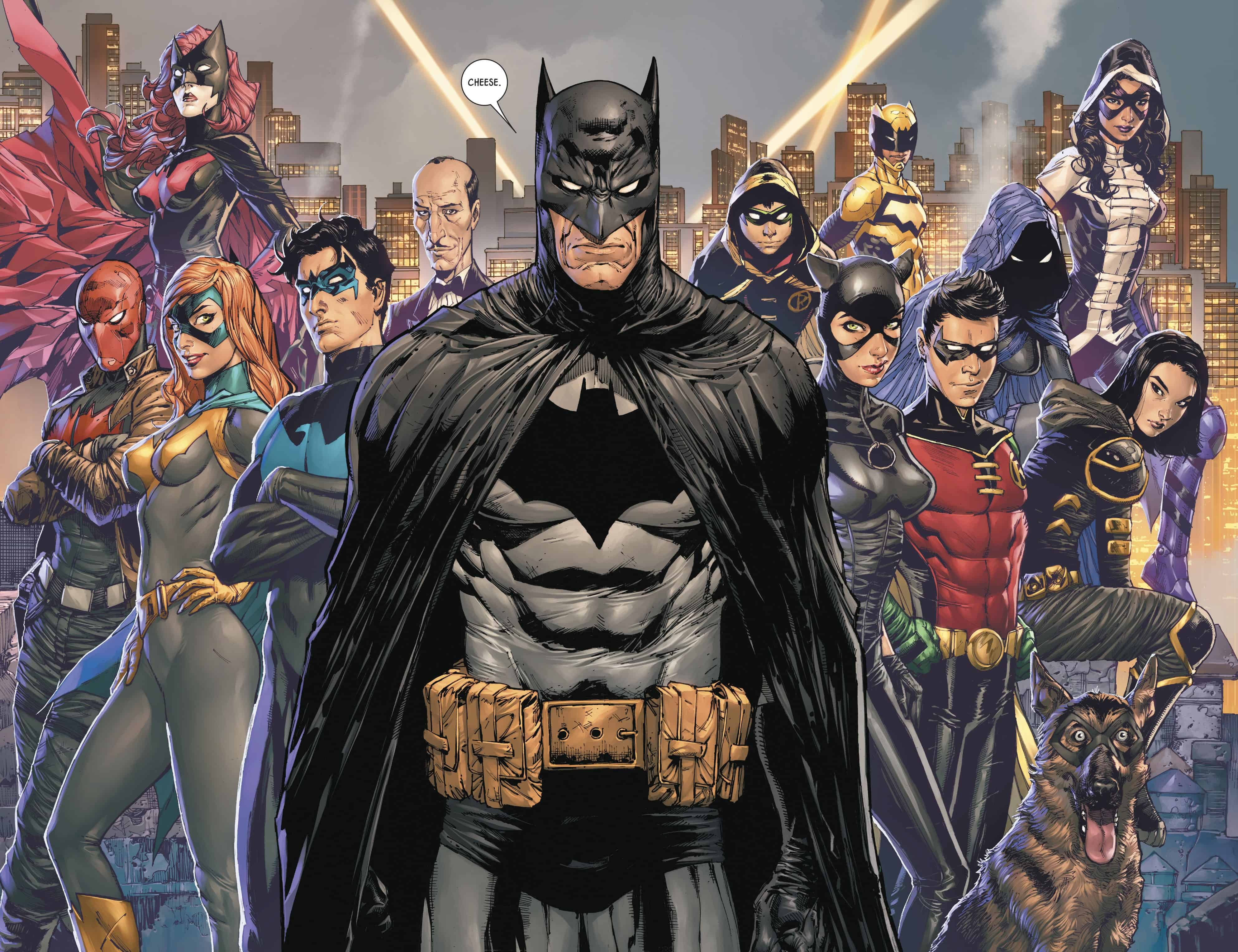 It’s a powerful concept that underscores Batman’s mysteriously complex emotional depth and luckily, is presented magnificently by Tony S. Daniel, Joelle Jonese and company. Though lacking particularly in action, the story makes up for it with more than enough heart by delving into Bruce’s emotional growth while wearing the cowl, showing just how far the character has come over the years.

In the highly anticipated story from Tomasi, Mahnke and company, we venture back through the seemingly endless encounters Batman has had with various villains in Gotham city. His relentless brutality, determination and even occasional recklessness are detailed by an unknown character who has come face to face with The Dark Knight himself. This creates an alternate perspective of how we would typically view these clashes and helps to set the stage for a curious new mystery.

But what we hear from this character isn’t the truth we have always known about Batman’s search for justice. Instead, we are given a distorted perception of the vigilante, twisted to the point where he is nothing more than just another “bad man”. At the end, we discover this conflicted narrator to be none other than the fan-favorite Arkham Knight character! This explosive (literally) reveal sets up the creative team’s upcoming arc in Detective Comics #1001 and is sure to excite plenty of fans looking to learn more about the Arkham Knight!

Detective Comics #1000 is a powerful culmination of 80 years of storytelling, resulting in a resounding success for DC Comics that absolutely shouldn't be missed by any fan of The World's Greatest Detective!