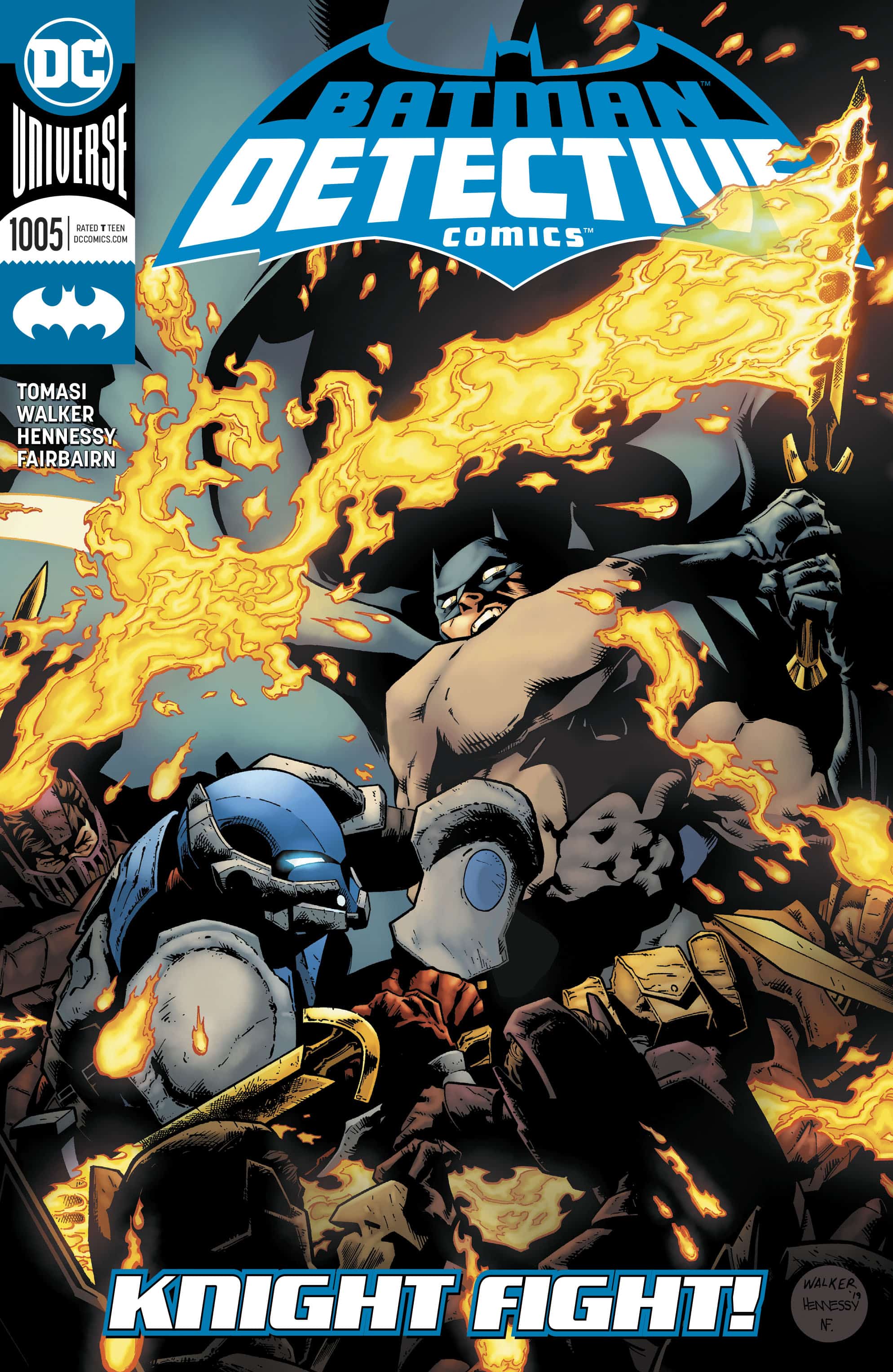 The finale of the Arkham Knight saga arrives as the Knight’s surprising cult within Arkham Asylum unleashes its full power! Will Batman be swept under by the madness? Who is the Knight, to have inspired so much loyalty? And is there any way of stopping them that won’t just cause their legend to grow?

The finale to the Arkham Knight’s introductory arc doesn’t leave any loose threads as it closes one chapter while ominously hinting at what’s to come for this fan-favorite character. 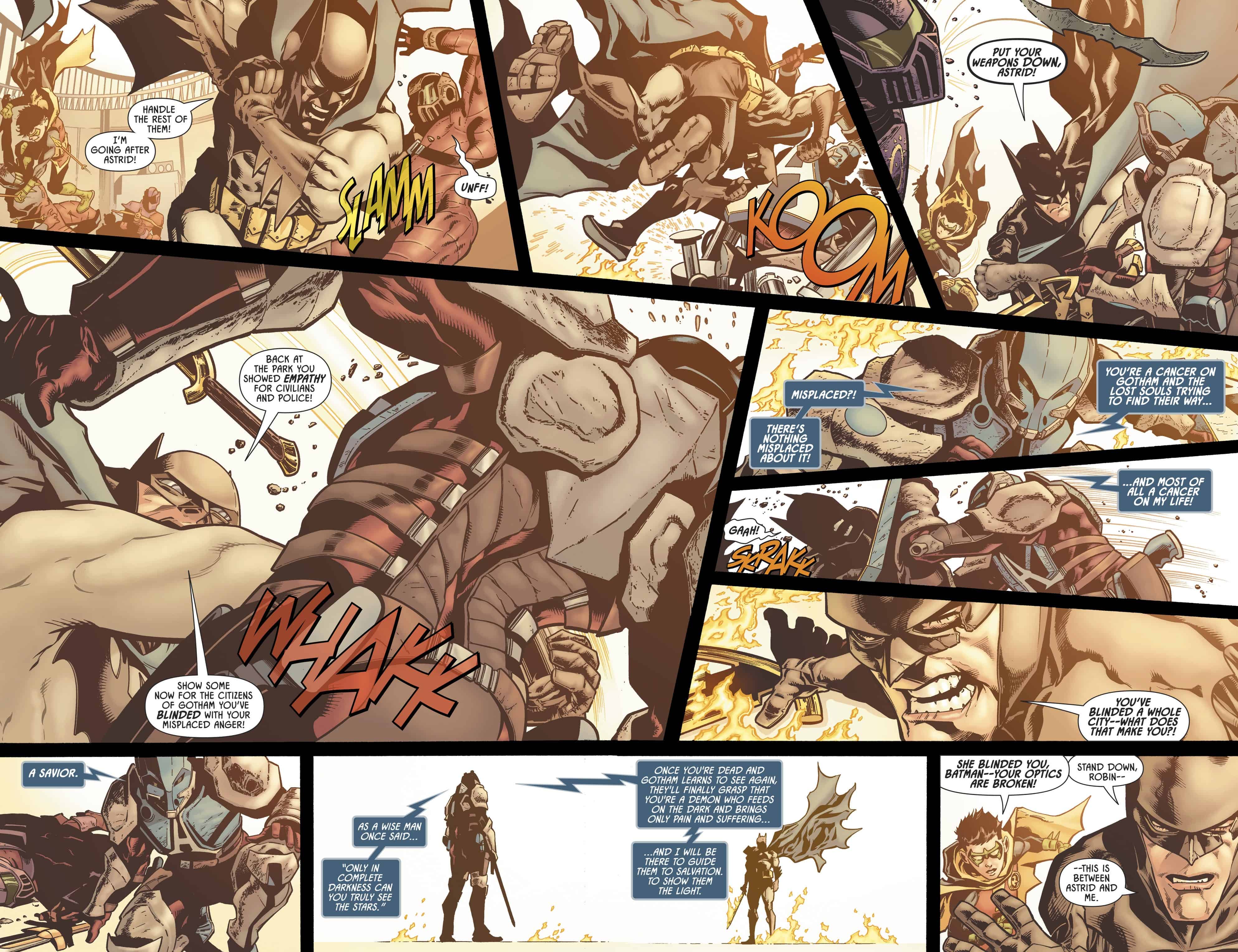 While it was an odd decision to stray so far from the character’s video game origins by revealing the Arkham Knight is the daughter of Doctor Phosporous and was raised in Arkham Asylum to hatch this devious plan, I was pleasantly surprised by how this arc managed to tell a succinct and enjoyable story. This isn’t one that requires a lot of knowledge of past Detective Comics story lines, nor does it get lost in the intricacies of its own lore.

The Arkham Knight arc has been somewhat by the numbers, which is arguably its biggest fault to date. The finale stays true to that course, giving a definitive ending to the story while also providing a small one-panel teaser right at the end. It hits all the notes that it should hit, but somehow, it feels like it is simply trying to get to the next major plot point before it fully fleshes out what’s currently happening. The most heartfelt moments come from the interactions between Bats and Robin. Tomasi clearly understands the dynamics between these two, hopefully he explores it deeper in the coming issues.

If you can get past the rather wild premise of the Arkham Knight’s introduction, there are a lot of great moments to enjoy. But for some, the mere idea of someone raised secretly by villains who attempts to blind all of Gotham just to send a message will undoubtedly just be too much. This type of comic book storytelling isn’t as off-putting for me, so I was able to appreciate the structural strength of the story while looking past some of the rather outlandish concepts.

If there is one thing we can all agree on though, its the quality of the artwork. This creative team has consistently delivered a great looking book that adds to the uniqueness of this new villain, giving an overall aesthetic that really helps to set the Arkham Knight in DC Comics lore. While Batman’s ears are slowly encroaching on being too tall for my liking, there is much more to enjoy in Detective Comics #1005 than there is to complain about. It’s just a solid book.

The Arkham Knight’s story is a testament to the professional ability of this creative team. It’s a fully realized and well-executed arc that accomplishes what it intends, even if it doesn’t always make complete sense. Fans of the video game that initially gave rise to this character’s popularity might not be as thrilled with the outcome, but the story was ultimately one that can be enjoyed by any fan and I appreciate that.

Next up, the Spectre!

'Detective Comics #1005' is a methodical conclusion to the Arkham Knight story that is entertaining at the very least, even if it doesn't always make sense.