Detective Comics #1008: An Invitation From You-Know-Who 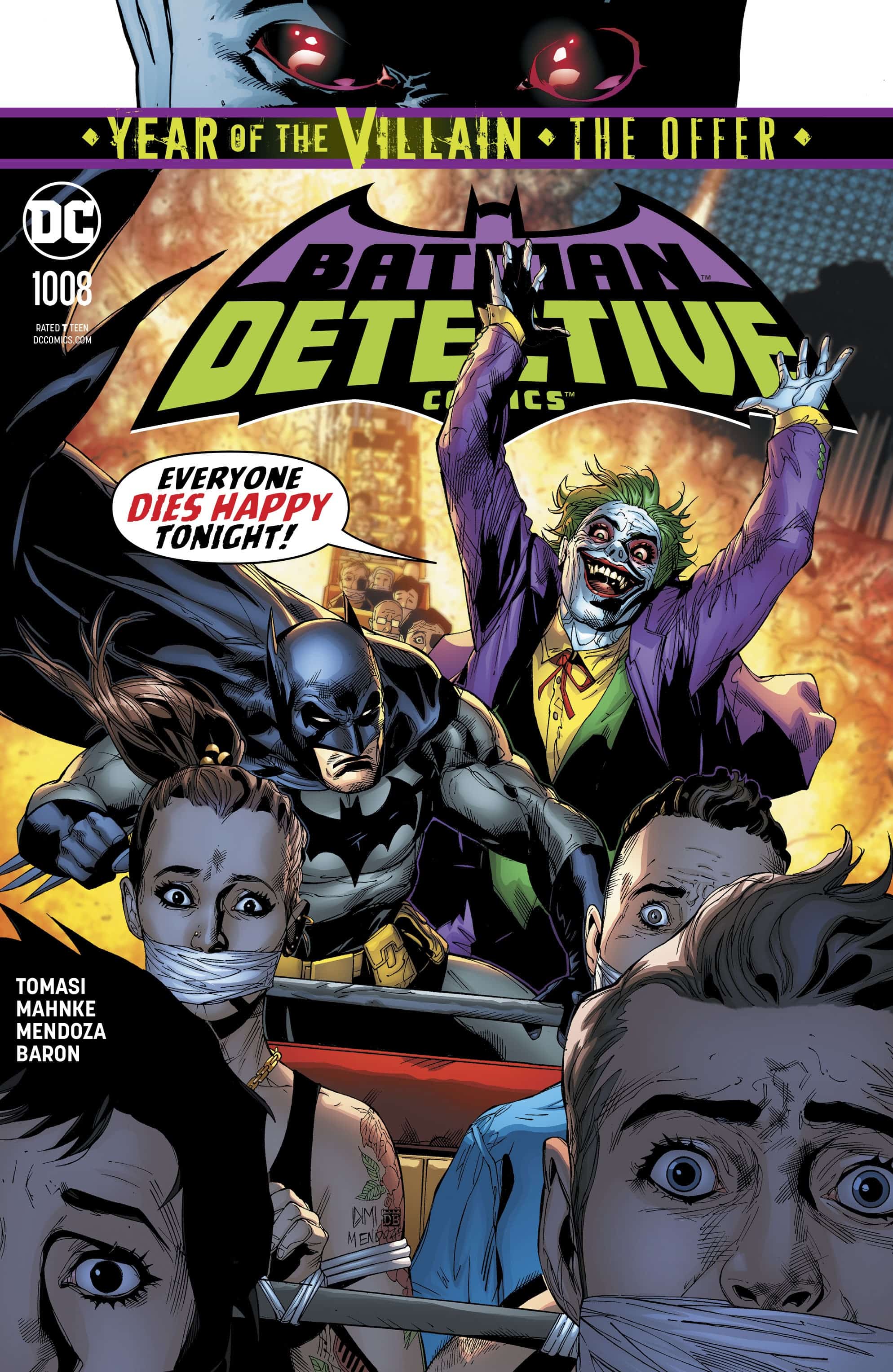 The Joker returns to Gotham City! The Joker is through working with the Legion of Doom, and he wants to get back to his roots: giving Batman absolute hell! The Clown Prince of Crime comes back with a bang—and he’s not about to take prisoners! As if that weren’t enough, Lex Luthor delivers the cure for Mr. Freeze’s beloved wife, Nora, freeing her from cryo-stasis at last! But something else is very, very wrong with Nora...

Tomasi and company return to the classic dynamic of Batman versus Joker for Detective Comics #1008, an inconsequential but still impressive one-shot! 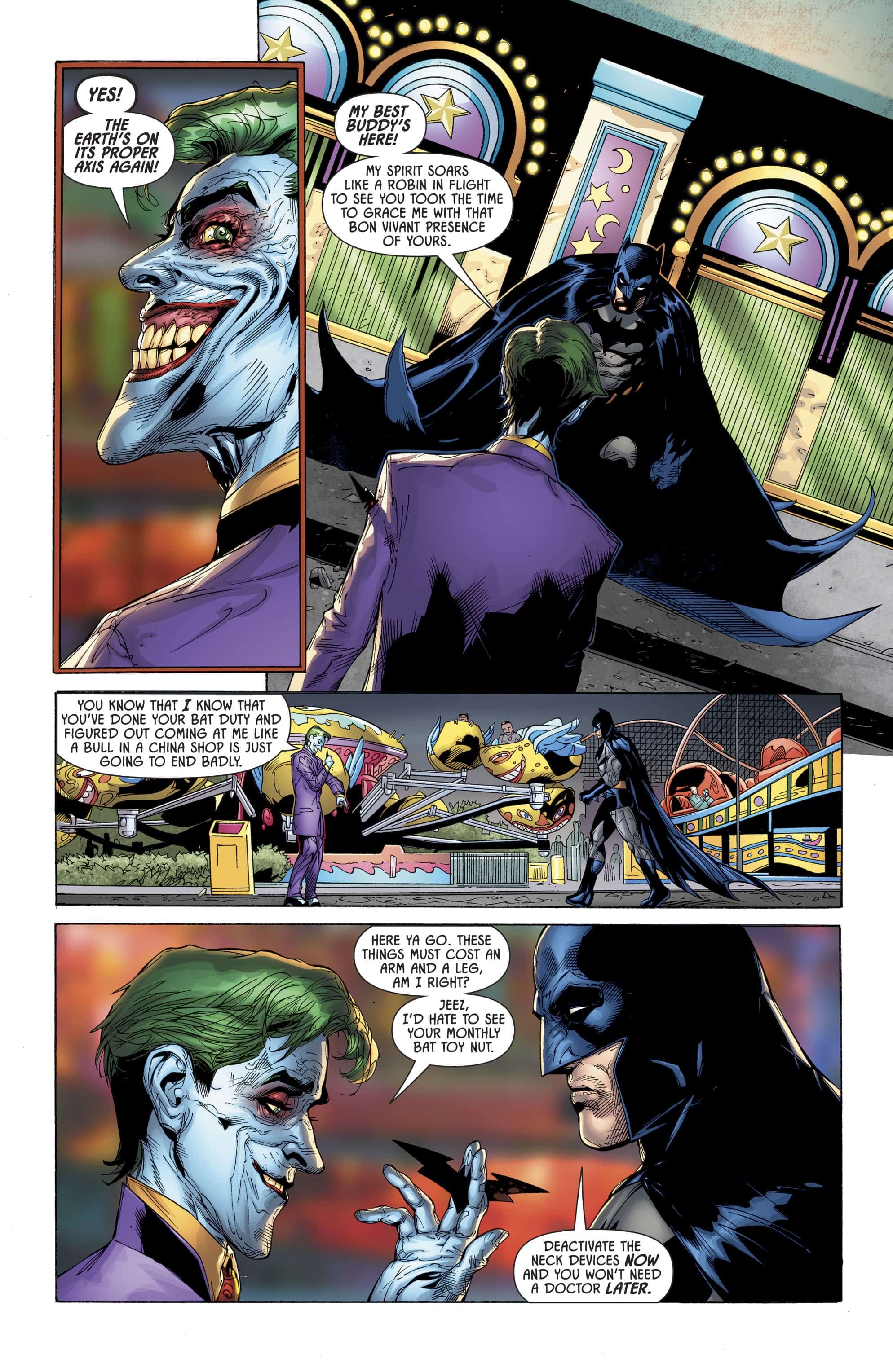 After reading Detective Comics #1008, you may find yourself asking “what was the purpose of what I just read”?

The answer is simple, there wasn’t one.

BUT, that doesn’t mean there isn’t enjoyment to be had from a book like this. The artwork from Doug Mahnke is some of the best he has delivered yet while teamed up with veteran writer Peter J. Tomasi. For those willing to dig just a bit deeper, we can see that the dynamic between Batman and Joker is the catalyst for the entire premise of this story. The inherent inevitability of their relationship serves as a foundation to explore the classic dichotomy of Batman versus the Joker.

The interactions between Bats and Joker drive nearly every aspect of this issue. But unfortunately, the duo mostly just moves through an amusement park for the majority of the issue. At one point, the they are even just casually riding a ferris wheel. Their back and forth is interesting, but we know Bats is playing the long game and attempting to thwart the Joker’s plans on their tour through the amusement park. The length that this creative team went to just to have what is basically a play date with Batman and Joker is admirable, if not slightly unnecessary.

It’s worth stating again that Doug Mahnke’s artwork alongside David Baron’s colors are without a doubt the highlight of the issue. This depiction of the Joker is horrifyingly vivid, but there is also a hint of exhausting in his eyes, playing into the overall notion that he really is just toying with Bats for the sake of it. There is no plan here, just yet another strange plot to cause mayhem. Rarely do we get such storytelling promise out of the artistic direction, but this creative team absolutely nailed it.

Overall, Detective Comics #1008 is an engaging story with some of the best artwork available from DC today. If you can get past the fact that it really doesn’t go anywhere meaningful, there are some truly interesting notions being toyed with.

If you can’t, well maybe Deadshot’s reemergence post-Suicide Squad in the next issue will pull you back in!

'Detective Comics #1008' is a commendable attempt at a one-shot with appeal that goes deeper than face value. It's a respectable issue that fans will find enjoyment in, even if it doesn't necessarily go anywhere meaningful.

Detective Comics #1008: An Invitation From You-Know-Who