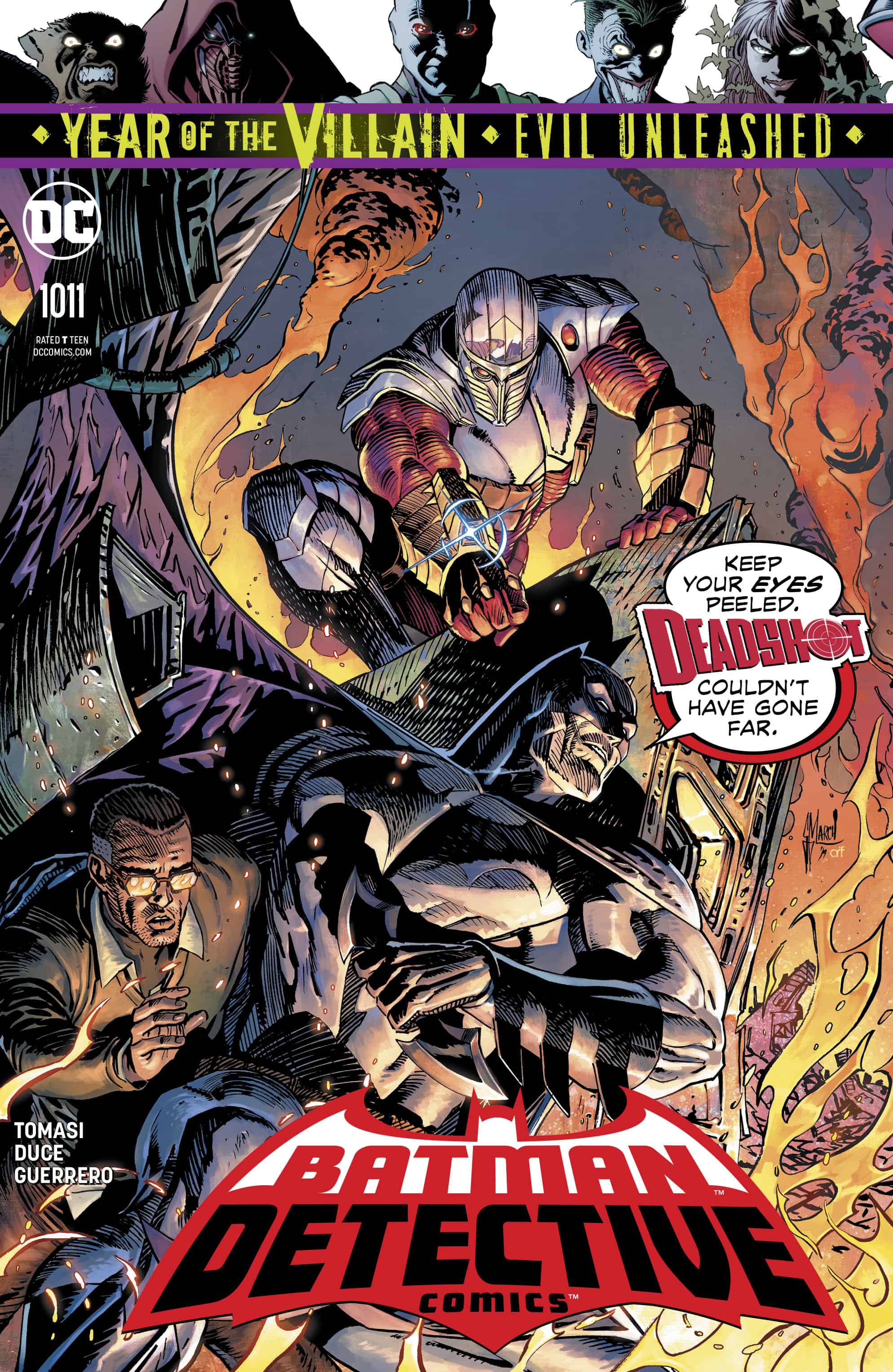 With only his two companions, Clarence and Hiroshi at his side, Bruce Wayne must use his guile, stealth and strength to overcome the skill and cunning of Deadshot while the lives of the other WayneCorp employees hang in the balance. 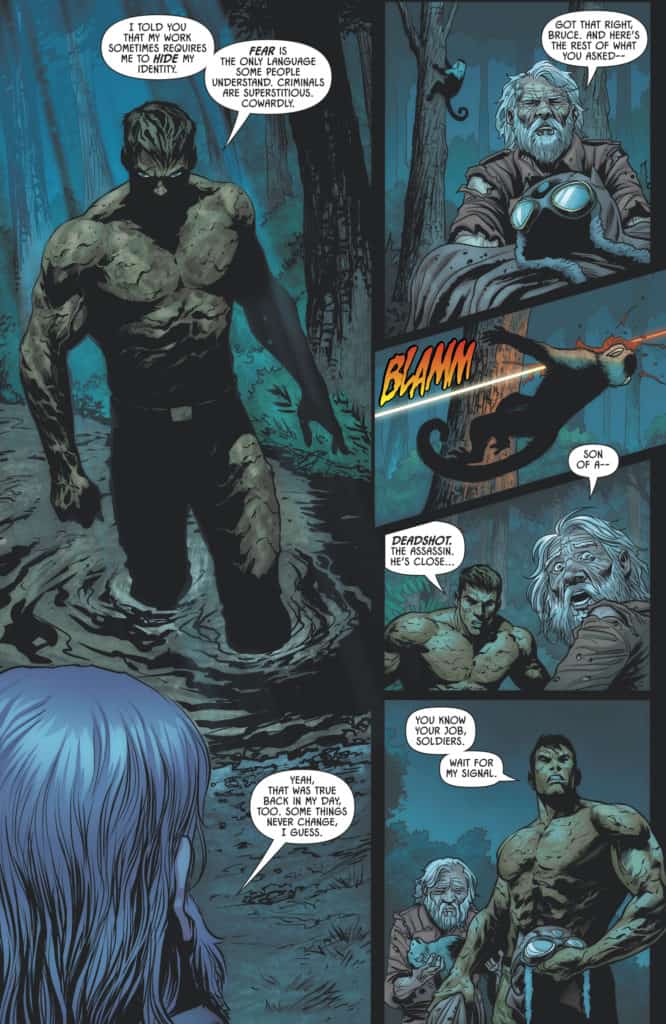 This issue was mostly wall to wall action the entire time and that is its greatest strength. After submerging himself in mud and gathering his makeshift costume from the wreckage of Clarence’s crashed plane, Batman sets his sights entirely on Deadshot. While trying to rescue the WayneCorp employees, Batman has Clarence and Hiroshi spring their plan on Deadshot, smacking him in the chest with the nose of Clarence’s plane. This gives Bruce enough of a distraction to save the employees, but unfortunately Hiroshi is injured and Deadshot escapes.

Batman chases Deadshot through the forest and the two have a pretty epic but one-sided fist fight. Christian Duce and Luis Guerrero make for a perfect combination as the Batman/Deadshot fight was spectacular. The two have fought many times before, but this one in particular was a work of art as Duce draws each panel in a way that easily shows off the momentum of attacks, dodges, and heavy impacts, especially in one amazing shot when a panel is blurred slightly to show just how hard Batman punches Deadshot in the face. 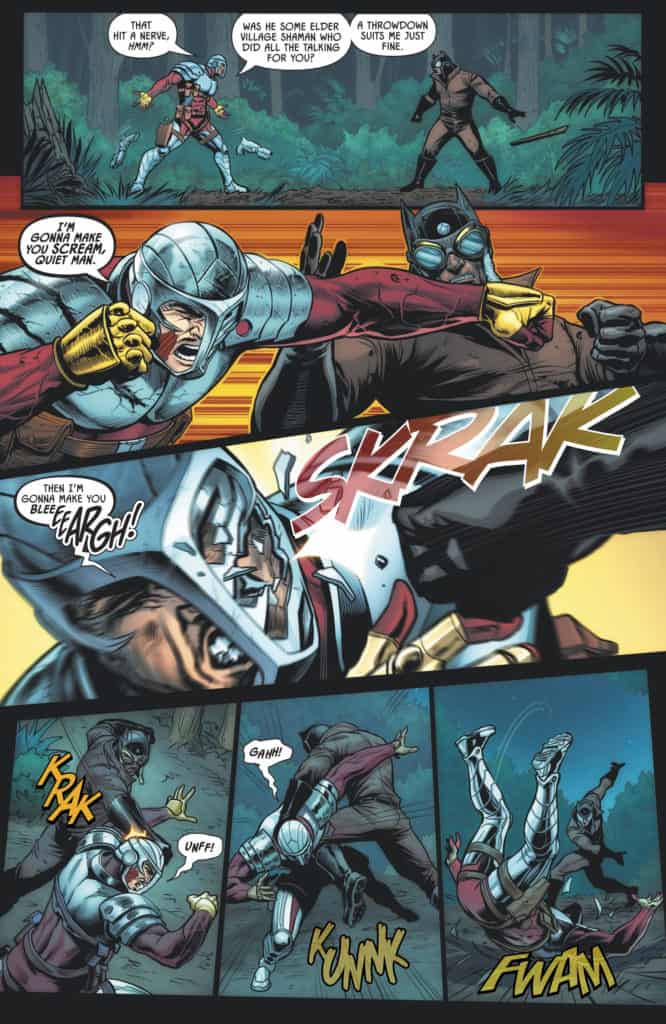 It doesn’t even end there either as Batman just dunks on him with punches, knees and a takedown. Deadshot thinks he has the upper hand when he uses the environment to his advantage, grabbing a vine and trying to choke Batman out, but Batman ever the conscious fighter, breaks the vine and ends the fight with with a stylish uppercut. 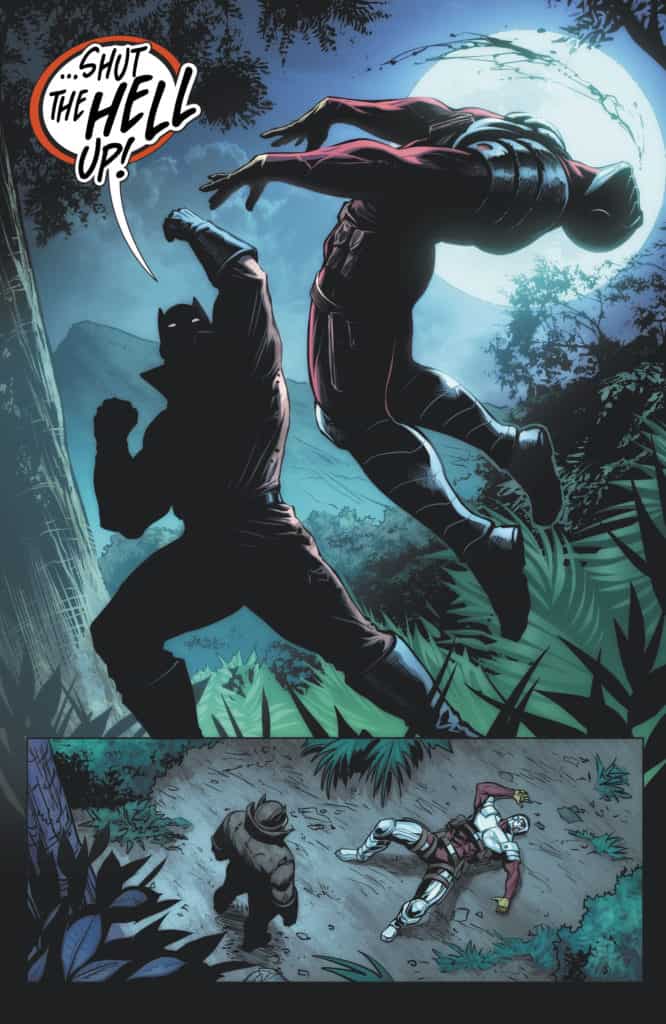 This splash page alone justifies every cent spent on this issue. Rob Leigh’s impeccable lettering captures the anger in Batman’s voice. Duce’s incredible posing draws an excellent line from Batman’s fist directly through Deadshot’s body as it flies through the air with the moon directly behind him. Guererro’s excellent coloring captures the beauty of the night and there’s just enough color from the light of the moon to where the dark shadows covering Batman and Deadshot feel even more epic and impressive. Help arrives soon after and we get our final last page teasers as we prepare for the rise of Mister Freeze.

What the book lacks in compelling and sort of camply storytelling, it makes up for in amazing art and direction in spades. This entire arc is worth reading simply for that alone, especially if you happen to love the skirmishes between the Dark Knight and the Man Who Never Misses. As we gear up for the real Year of the Villain confrontation, this was a fantastic slight detour.