The Year of the Villain is in full effect. With Lex Luthor giving offers of power to every big league player in the DC Universe, has Victor Fries dedication to saving his wife by any means necessary finally paid off? 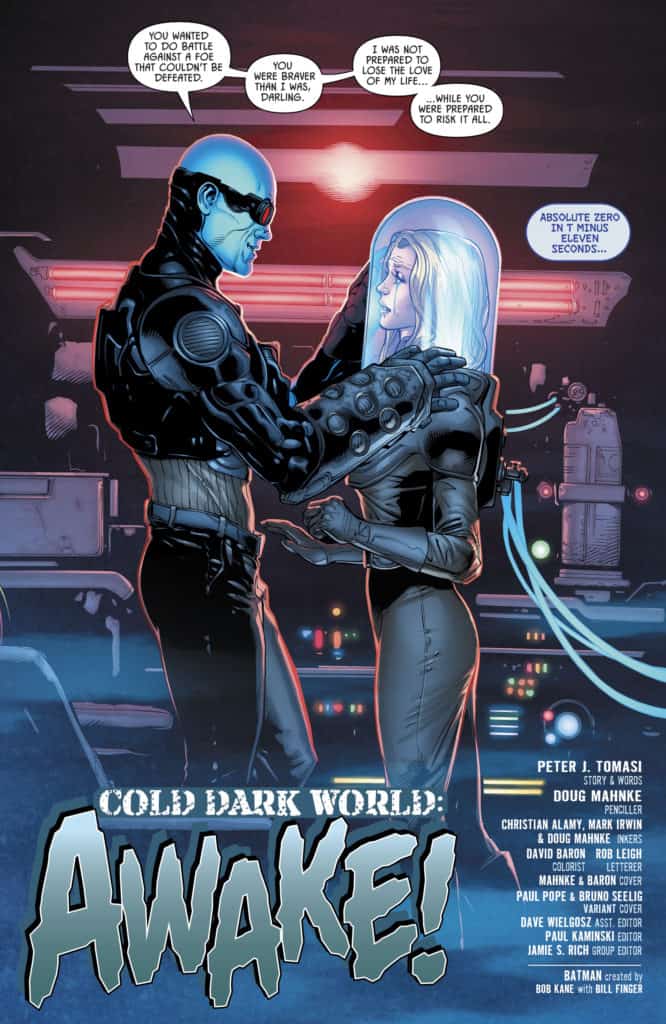 The last issue of Detective Comics saw Batman trying to thwart Mr. Freeze’s efforts to revive his wife through the use of Apex Lex’s serum. Freeze managed to get away and revive his wife, much to her dismay. This issue picks up immediately afterwards and explores the aftermath of Freeze’s decision.

In much the same way the DC Animated Batman & Mr. Freeze: Sub Zero revitalized Mr. Freeze as a character, this issue does the same for him now that he and his wife have reunited. Nora has some initial misgivings about her new condition and how she’s suffered for years watching Victor through her tube, suspended between life and death. But when Victor tells her about the many years of pain that led him to this moment, they share a kiss and unite as Mr. and Mrs. Freeze.

Doug Mahnke knew exactly what fans wanted with this issue and placed a heavy focus on Victor, Nora, their interactions with each other and the love between them. Every moment they appear, they feel genuine with many close up shots of both of them, giving knowing smiles or kisses. Victor even smiles, multiple times, something we haven’t seen in years. Great credit to David Baron’s coloring as well, keeping the atmosphere cold and chilling while also making Nora progressively more blue as the book went on.

Peter J. Tomasi does an excellent job of elevating Mr. Freeze from the relative obscurity he’s been facing since the New 52 where his origin story changed and Nora was just some woman that died in 1943 whom a crazed Victor believed was his wife. Tomasi has reestablished Mr. Freeze as one of Batman’s more sane villains, but now that his life goal is complete, where does Freeze go from here?

Mr. Freeze has always deserved better and with this storyline, he’s finally gotten it. Peter J. Tomasi, Doug Mahnke and the rest of the creative team on this book have done an excellent job of crafting a refreshing and fulfilling chapter in the life of Mr. Freeze. This issue is the culmination of almost 30 years of characterization for one of Batman’s most chilling foes. Beyond a shadow of a doubt, this entire arc is worth reading for this issue alone.