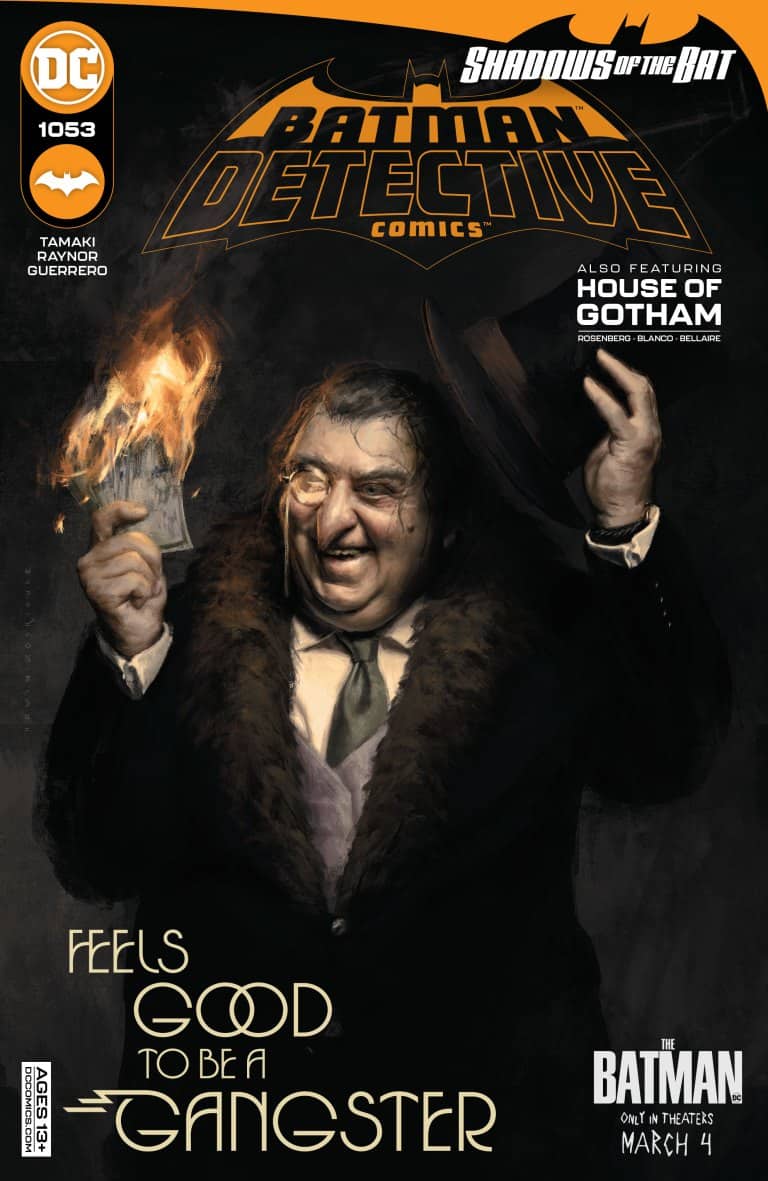 War in the streets! As Dr. Wear desperately tries to keep his plans for Arkham Tower from crumbling, a major drug deal gone bad puts the nervous doc in the sights of both the Party Crashers and the Penguin! The list of people very badly wanting to kill Dr. Wear grows, and Nightwing is on the precipice of cracking the whole scheme wide open! But with the maniacal Party Crashers waging war against the Bat-Family across Gotham, Dick must choose between helping a tower full of villains and helping his family!

The logic in moving Detective Comics to a weekly format was sound from the DC brass; rather than stall for time during Batman’s narrative absence from Gotham, Mariko Tamaki and a talented group of artists would let the Bat Family off the leash in a sprawling epic. That said, they surely knew the risks involved in assigning the writer a 12-parter, chief among them coherently pacing the story. While the first five installments of Tamaki’s “The Tower” had fans on the edge of their seats, over the past two weeks, the saga’s momentum has cooled significantly.

Though Detective Comics #1052 ended with a dangling plot thread, chapter #1053 of the iconic title opts to lay more groundwork before addressing what happened to the Huntress. Dr. Wear, who the readers have known for some time is a con, has found himself ensnared in his web of lies, and is now in hot water with both the Penguin and the Party Crashers. The Party Crashers, meanwhile, are seeking retribution for last week’s dustup with the Batgirls (Brown and Cain) and Batwoman.

When Tamaki finally returns to Nightwing’s investigation of Arkham Tower and the condition of the Huntress, a considerable amount of the issue’s pages have already been used. For the second consecutive week, the comic ends on the note of a “to be continued” cliffhanger. That decision may be controversial given how little the arc has progressed of late; one can only expect the readers to stand at attention for so many installments before they forget what they are waiting for.

The weakness of this issue is that Tamaki shifts gears from exponentially speeding up Wear’s downfall and the Bat Family’s Party Crasher problem to only progressing the main plot by a few pages. That said, its greatest strength is the art of Max Raynor, now on his third straight issue of “The Tower.” Raynor mixes realism with comic book sensibilities to craft a modern style that would work well for any action-filled comic book. His extended audition on the Batman line will no doubt win him fans in the DC editorial bullpen.

This is a setup issue through and through.  While that is not the end of the world, until the final few pages we get very few new developments.  Dr. Wear is in over his head and the Party Crashers are trouble; that is not news.  For the second week in a row, Tamaki has to spread her storyline thin to continue towards the 12-issue finish line.  If the plot continues to drag much longer, she'll have to do plenty of heavy lifting to get fans reinvested for the eventual payoff.