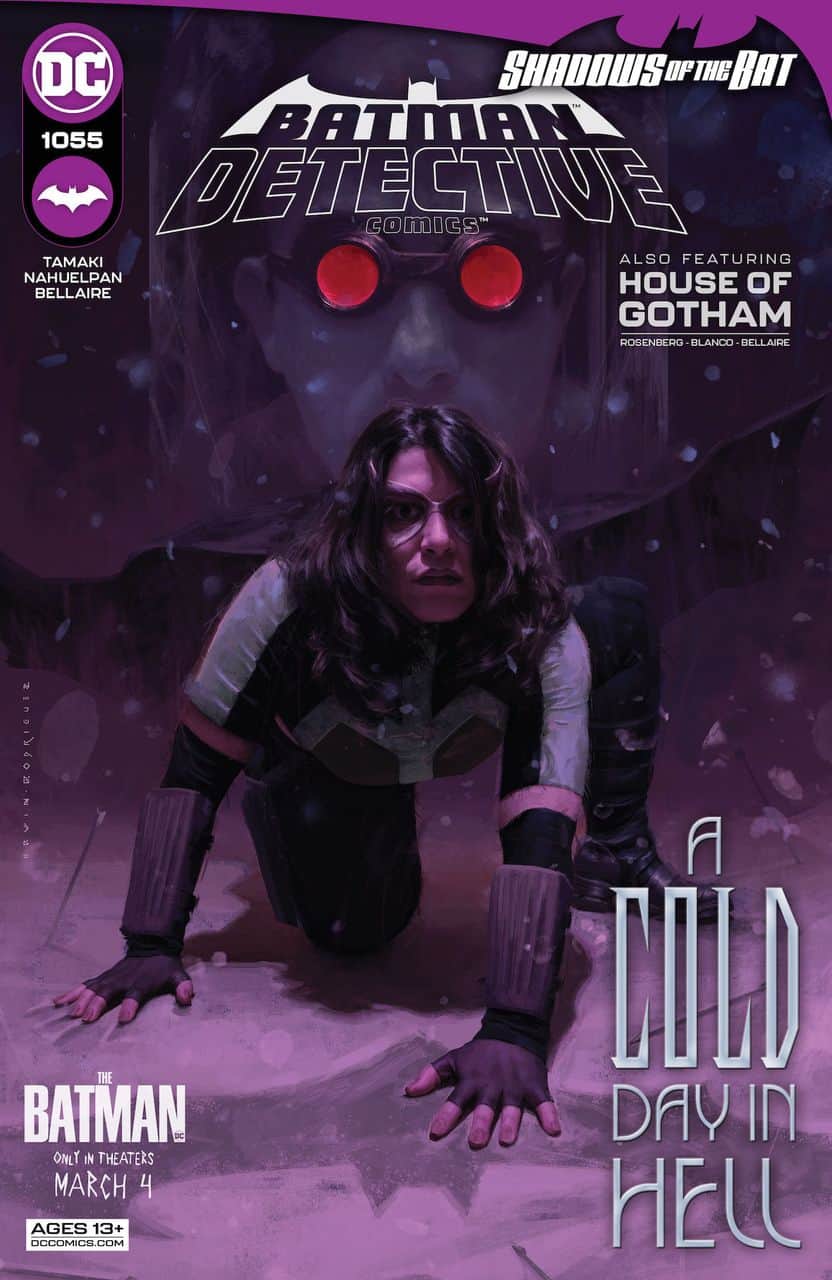 With their grand scheme crumbling around them, Dr. Wear and the mysterious Dr. Ocean have lost control of Arkham Tower to the patients it houses…who just so happen to be some of the most violent, murderous villains Gotham City has ever seen. The Bat-Family on the inside are in shambles: Huntress is wounded, Nightwing is carrying 175 pounds of smarmy jerk on his shoulder, and Dr. Meridian is incapacitated. Who’s left to save the civilian hostages from this nightmare? Hmm…wasn’t there a patient who thought she was Harley Quinn?

In last week’s installment of Detective Comics, The Tower, author Mariko Tamaki’s 12-part epic, finally delivered on the chaos promised in the first issue of the arc all those weeks ago.  Dr. Wear is dead at last, and anarchy reigns in Arkham Tower, the late creep’s ill-fated long con.  With Bat Family members Nightwing, Huntress, and Batgirl (Stephanie Brown) already stranded on the inside, Detective Comics #1055 ups the stakes even further as this weekly arc nears its conclusion.

While Batgirl is in no less trouble than Huntress or Nightwing, she receives precious little attention during this issue.  In truth, neither of the Batgirls have been particularly impactful during this event, and they would have probably been better off absent altogether than marginalized to this extent.  Batgirl and Oracle, on the other hand, have been integral to the plot thus far.  They also take a major backseat during this issue, though, as the focus shifts to the struggles of Huntress and Nightwing inside of Arkham Tower.

Our heroes are predictably on the backfoot as the inmates, led by Siphon and Ana Vulsion, now run the asylum.  Nightwing makes a run for it with Psycho-Pirate, still reeling from the death of Wear and his loss of control over the patients, in tow.  Elsewhere, Huntress faces an uphill battle to protect the wife of Mayor Nakano, who suddenly finds herself a likely hostage of Arkham Tower’s many villains.  The twosomes collide in a scrap with classic Batman foe Mr. Freeze.  Amidst the chaos, a far more nefarious villain makes his presence known.

This issue continues the momentum of last week’s turning point in the arc, with the inevitable downfall of The Tower now well and truly underway.  Fun action sequences abound before a new big bad enters the fray.  Both the timing and casting of said plot device are odd, however.  This particular foil recently had a starring role in a major crossover, and his presence here threatens to dilute the importance of both that event and The Tower.  While Siphon and Ana Vulsion were never going to be A-List foes, surely Anarky or some other shelved character could have played this role instead.  Moreover, there had not been the slightest suggestion of this person’s involvement in the story through 8 issues, making his introduction feel more shoehorned than shocking.  It remains to be seen whether the creative team can justify yet another “find out next week” cliffhanger with just 3 issues left.

Despite the confusing twist ending and the departure of Max Raynor, art remains a strong point in the issue.  Amancay Nahuelpan is on pencils, and though his work is not quite as clean as Raynor’s, it is stylistically consistent enough not to be a jarring switch.  Moreover, the finishes and colors are more befitting of a major Batman title.  Beautiful as Raynor’s art was, its vibrance was a bit tonally inconsistent with the subject matter, a slow-burning suspense tale told against the backdrop of a mental hospital.

Finally, the issue returns to Matthew Rosenberg and Fernando Blanco’s backup feature, House of Gotham.  The story, also in its ninth chapter, continues following the unnamed boy through an abridged version of Gotham’s history.  Things do not get any easier for him, as he rehabs from his unfortunate journey through Knightfall only to find himself stranded in No Man’s Land.  The boy shows increased cunning and ruthlessness in an encounter with yet another classic villain, hinting at a possible descent into darkness.  As far as ten-page backups go, Rosenberg has hit a homerun with House of Gotham so far.  Though this particular chapter was comparatively tame, it provides plenty of character development and will have readers eager to see where the boy’s vendetta against Batman and the Joker takes him next.

Tamaki and co. took a big risk by introducing a new foe this late in the game.  Though this issue is well executed, it is frustrating to see such a large potential monkey wrench thrown in during the closing pages.  If the creative team cannot adequately explain how and why their new main villain is here during the next three issues, all of the good work they have done so far could be for naught.