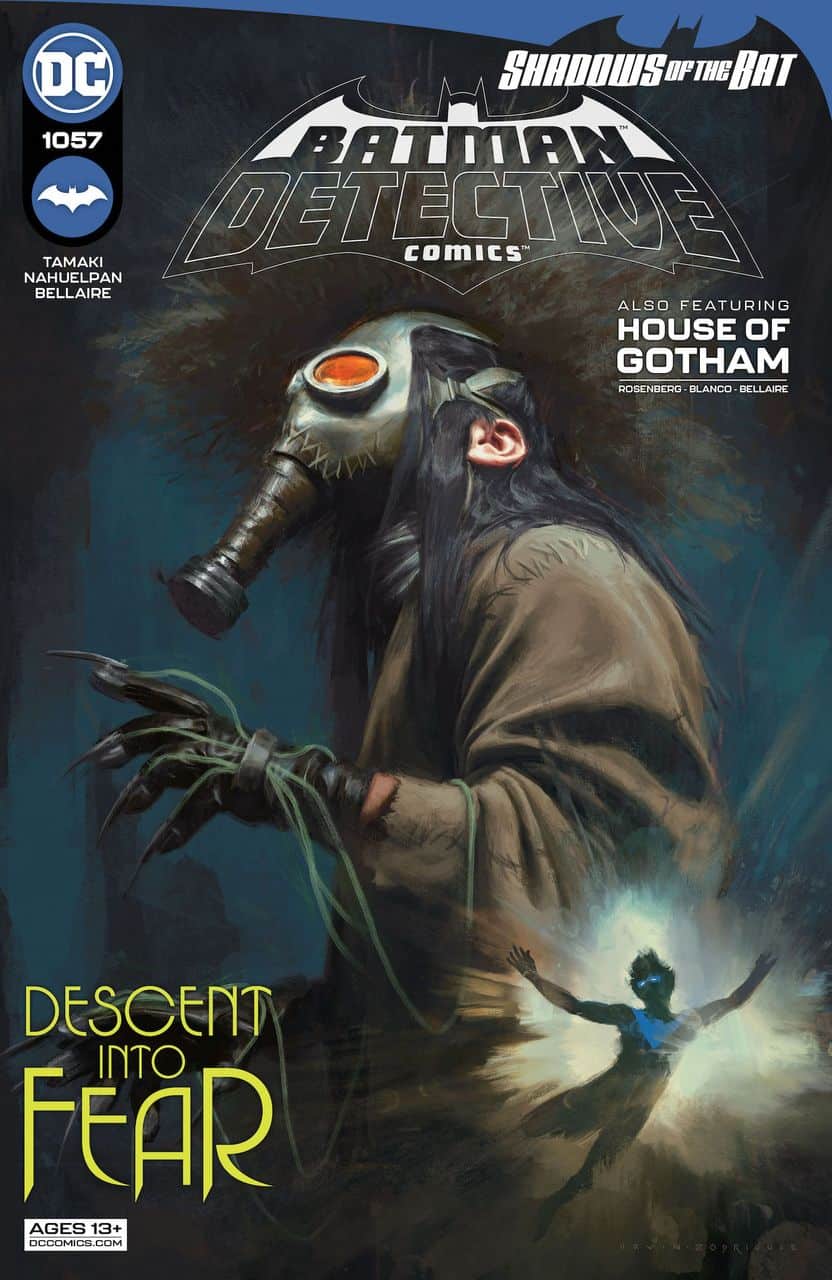 Batman is back! And just in time to save the life of Nightwing, who was given a fear toxin super-dose and tossed out of a skyscraper-another tragedy surrounding Arkham Tower’s hostile takeover. As Scarecrow readies his forces for the big bat, war erupts on every floor of the building between the Penguin’s thugs, the Party Crashers, the murderous Arkham inmates, and an overwhelmed Bat-Family who’s struggling to get everyone out alive! Will the return of the bat be enough to turn the tide to victory…or does another X factor lurk in the battle that could save the day?

Regardless of format, 12 issues will always represent a colossal story.  With that in mind, part 11 of The Tower is the beginning of the end of an event that began months ago.  As such, the issue starts to put a bow on the disasters that have plagued Arkham Tower since its introduction.  Detective Comics #1057 addresses Batman’s return to Gotham as well as Scarecrow’s most ambitious scheme yet.

The issue begins with the revelation that last week’s attack on Koyuki Nakano and Psycho-Pirate ended in the loss of the latter’s Medusa Mask.  Scarecrow, now in possession of the mask, could conceivably use the its manipulative powers to take his power over terror to new heights.  Elsewhere, the Penguin and the Party Crashers alike ramp up their efforts to collect on the late Dr. Wear’s heavy debts.

The issue continues to show yet another faceoff between Huntress and Anna Vulsion, perhaps for the last time.  The two have traded blows several times over the course of The Tower, and the sequences have delivered each time despite numerous changes to the art team.

Finally, Batman and co. have a showdown with Scarecrow at the climax of the issue.  The penultimate installment of the arc ends with a huge hint on the nature of next week’s payoff.

Detective Comics #1057 suffers somewhat from the sort of overcrowding that is commonplace near the end of events.  At least three characters only contribute to the plot via action sequences, which struggles to justify their introduction in last week’s issue beyond shock value.  As per usual, Amancay Nahuelpan translates Tamaki’s action-packed script into great, easily understood interior artwork.  Between Nahuelpan, Max Raynor, and Ivan Reis, The Tower has consistently excelled on the aesthetic side.

Also in its penultimate chapter is House of Gotham, the backup feature by Matthew Rosenberg.  The unnamed protagonist collects the array of allies he has gathered throughout a lifetime spent in the crossfire of Gotham’s heroes and villains.  Now, he takes action against his perceived tormentors.  House of Gotham has had a better handle on weekly pacing than the main story, perhaps thanks to its abridged length.  Readers will be eager to see what the future holds for this new character.

The Tower has been a great source of action and visual storytelling.  Through 8 issues or so, it backed that format up with a tight, engaging plot.  The introduction of Scarecrow and later Batman has read like an easy out to a long arc, though.  The once slow-burning thriller has devolved into a run-of-the-mill if slick superhero punch-up.