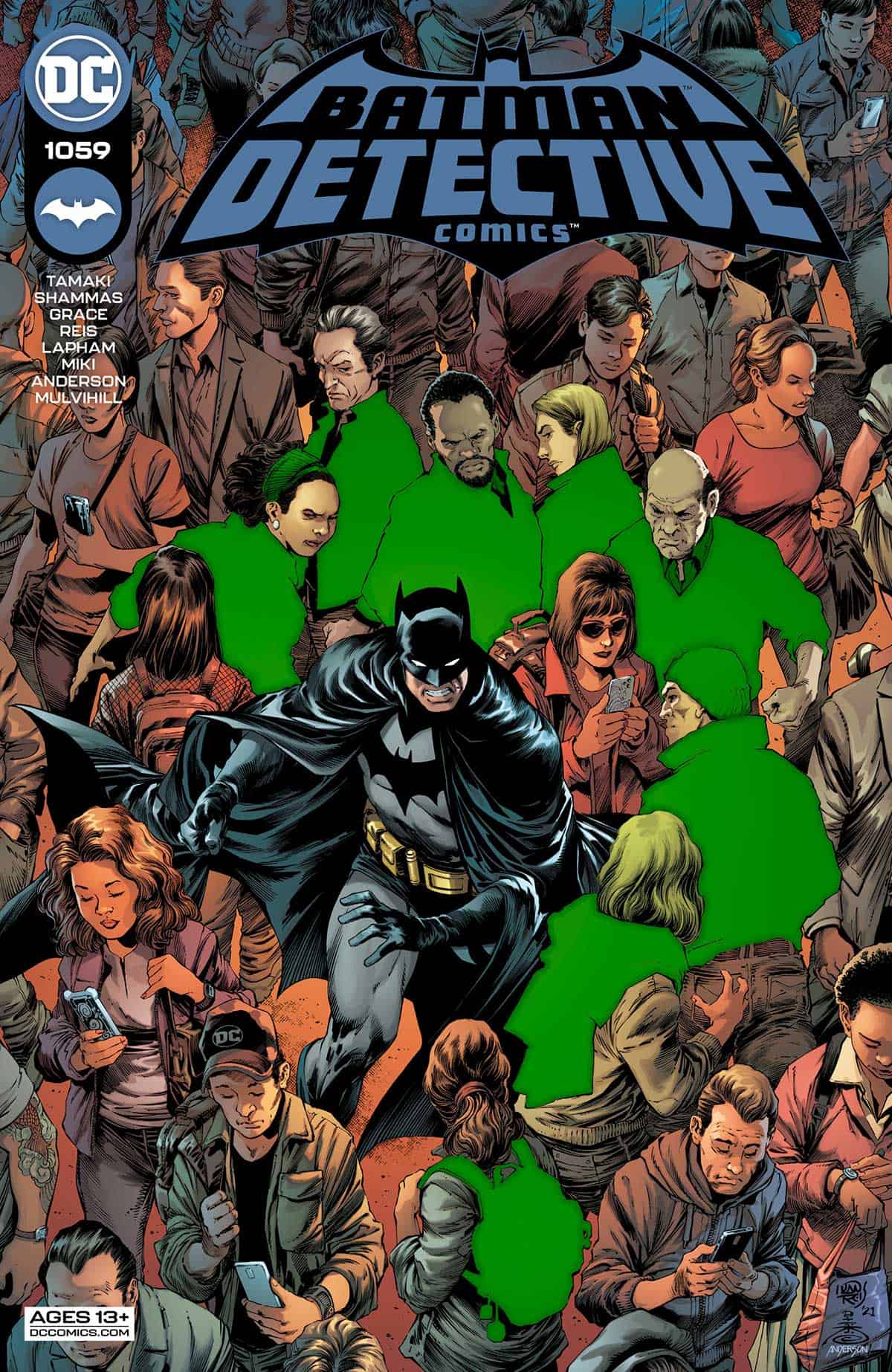 Riddle me this… when is a criminal not a criminal? The answer awaits you in the start of a brand-new Detective Comics story arc from writer Mariko Tamaki, guest co-writer Nadia Shammas, and legendary artist Ivan Reis! The Riddler is back in Gotham City in a big way, becoming a media personality and using his newfound influence to wreak havoc on the Dark Knight. As Batman chases down clues to put an end to Riddler’s machinations, the clock ticks away for the citizens of Gotham whom Edward Nygma has placed in the line of fire…

Mariko Tamaki was joined by co-writer Nadia Shammas for Detective Comics #1059 as the title moves on from “The Tower,” the 12-part weekly epic that concluded last issue during #1058.  That arc was green-lit by the DC brass to keep Batman’s extended cast busy while the Caped Crusader engaged in his globe-trotting “Abyss” arc in the main title. Twelve installments presented the creative team with several pacing challenges, though, and the Dark Knight’s anticlimactic return coupled with an overused main villain ended the story with a dud.  The reemergence of the Riddler at the close of ‘Tec #1058 presents Tamaki and company with yet another creative challenge: doing Batman’s second-most iconic villain justice in an arc that no doubt seeks to capitalize on his acclaimed appearance in Matt Reeves’ recent blockbuster flick.  This issue is a strong first step in that direction.

To begin, the comic introduces readers to the Riddler’s newest gig, megalomaniacal media personality. Fans of Rocksteady’s Batman video games will find his function in that role somewhat familiar.  The villain, now sporting some dodgy facial hair, uses his presence on the airwaves to deride Gotham while, you guessed it, asking Batman his riddles.

The riddles coincide with a crime spree that Batman can’t make heads or tails of, not least of all because the perpetrators are all model citizens.  As Batman chases down leads on the streets, his civilian alter ego, Bruce Wayne, reappears in the pages of Detective Comics for the first time in months to do a little digging of his own via his social connections. While this ingratiates Bruce with a new prospective love interest, the issue closes with the suggestion that she too may be in the Riddler’s thrall.

Ivan Reis returns as the regular penciler after various guest artists finished “The Tower,” and again exhibits an excellent artistic understanding of Batman. A few panels featuring the Dark Knight trying to disarm a bomb are startlingly evocative of the work of Neal Adams, considered by many to be the quintessential Batman artist. Reis is always reliable on DC’s biggest books and is a great example of why the company tries so hard to retain its artists.

Finally, Sina Grace and David Lapham begin a new backup feature starring Gotham Girl, a fan-favorite character of former Batman scribe Tom King. The troubled young hero is revealed to have been discharged from Arkham, and grapples with her mental illness as she tries to track down whoever is behind a tabloid blog, also called Gotham Girl (get it?).  The mystery story has some strong characterization and will retain reader interest, though hopefully, it has a better ending than “House of Gotham,” which backed up “The Tower,” which fell flat at the end.

The smothering length of "The Tower," a six-part plot spread thin over twelve parts, always felt like it was thrust on Detective Comics’ creative team rather than chosen by it. Here, Tamaki and series newcomer Shammas seem to have begun a much more manageable yarn that returns the original Batman series to its detective roots.  Additionally, it stars a villain in the Riddler who feels comparatively fresh when compared to the rest of Batman’s overexposed rogues gallery.  If the creative team continues to produce comics with this narrative quality and pacing, they will reclaim momentum lost on crossovers and weeklies in no time.