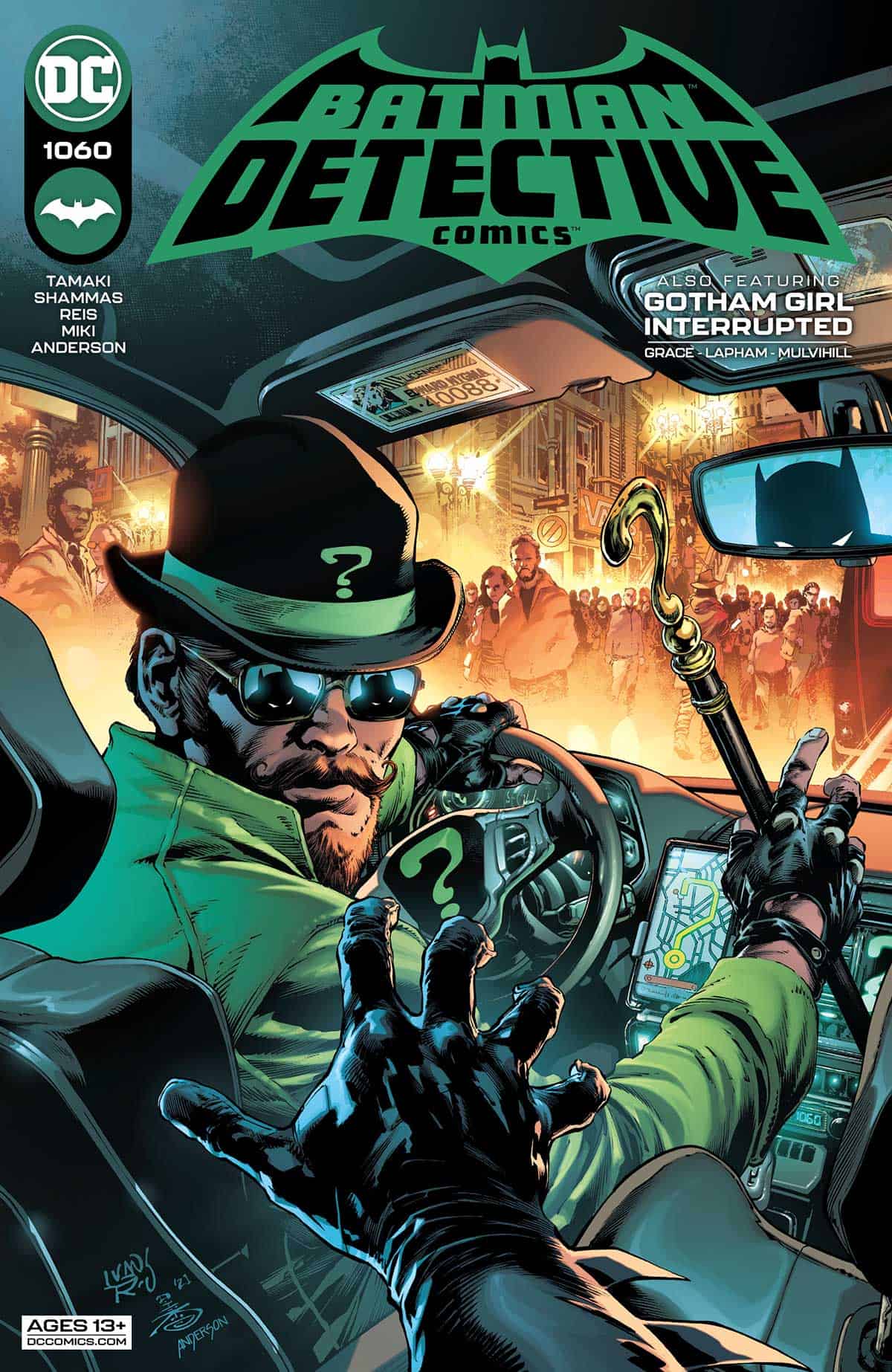 Batman has deployed one of his most powerful weapons in the hunt for the mysterious bomber plaguing Gotham City…but it’s not the Batmobile, the Batwing, or even the batarangs. It’s Bruce Wayne! As Bruce investigates the courtroom bombing that nearly left Deb Donovan’s daughter a splatter on the wall, could there be…love in the air?

Detective Comics #1060 continues Batman’s search for a key to the Riddler’s latest query: when is a murderer not a murderer?  The deranged mastermind has posed that question to the Caped Crusader by having seemingly innocuous unconnected perps do his heinous bidding.  When one of the unlikely criminals is all too happy to go to jail, and another takes his own life, Batman is left wondering just what the Riddler has on them.  In this issue, he again decides that Bruce Wayne might be better suited to find those answers.

Wayne opens this installment of the original Batman title out to dinner with Caroline Donovan, the would-be victim of ‘Tec #1059’s courthouse bombing.  The prospective couple shares their unique perspectives on crime and punishment in Gotham before Wayne seems to detect there is something his date is not telling him.

Conveniently, his time on the clock as a superhero leads Wayne, as Batman, to a break-in at the Gotham Gazette, and one of the few people who may know more about him than the case, investigative reporter (and mother of Caroline) Deb Donovan.  The elder Donovan reveals a nefarious secret about the past of one of the Riddler’s “citizen criminals,” suggesting that they are blackmailed.  This is confirmed when Caroline receives a note from the villain, paying off last issue’s promise that she too is in his thrall.

When the Gazette is taken hostage, and Batman encounters yet another victim who would prefer death to continued debt to the Riddler, both the hero and the readers are left wondering just what cards the trickster is holding.  That question is amplified when one character goes to shocking lengths to protect the Riddler’s schemes.

The Seven is still finding its feet but gives Mariko Tamaki and co-author Nadia Shammas scope to return a supporting cast of influential Gothamites to Detective Comics.  Those supporting characters were one of the strengths of the early installments of her tenure on the book, and explore the status quo of Batman as a city dweller in an interesting way.  Ivan Reis’s return to the title continues to produce stunning visuals even as Batman investigates; when the story inevitably reaches a fever pitch, the penciller will have even more scope to produce stellar art.

If Detective Comics #1059 established the Riddler’s scheme of sowing chaos through improbable criminals, chapter #1060 follows Batman’s investigation into his foil’s endgame.  The issue is largely made up of rising action until a legitimately surprising conclusion.  Where that development takes the story will determine the success of the wider arc, but for now readers will have to settle for a competently crafted Batman comic.